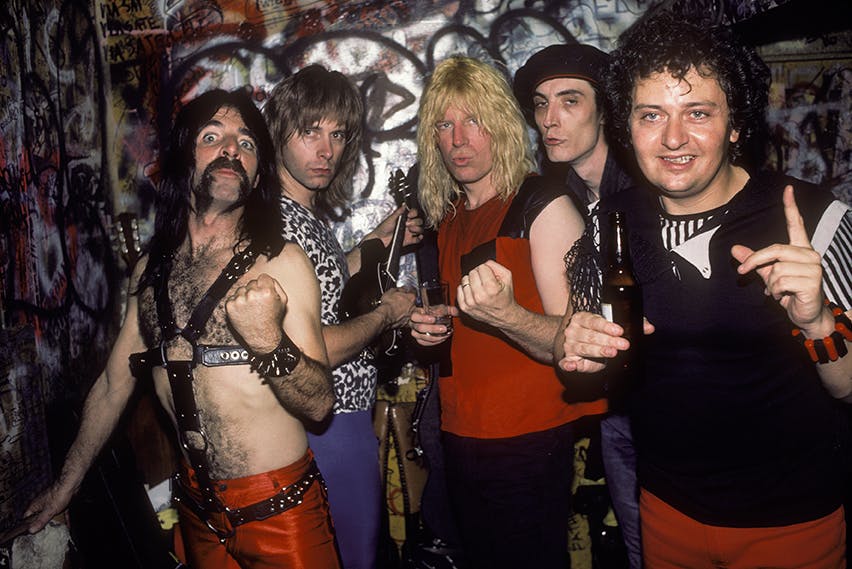 There are countless bands in the world. Think of a number, a really high number, and there are even more bands than that. However – despite this plethora of talent available – real-life bands don't always fit into the narrative or aesthetic of our favourite movies and TV shows, so fictional bands are created. And sometimes they kick ass! So much so that a handful have bled into reality, releasing music and playing live.

Here we look at ten of our favourite fictional rockers that would certainly make the rock scene an even more ridiculous place.

WHO: When not transforming into a werewolf, Sunnydale high schooler Oz (Seth Green, now best known as the voice of Chris on Family Guy) plays guitar in local act Dingoes Ate My Baby, a band hailed more for their big amps than their sound. He aspires to one day play an E-flat, diminished ninth chord, “It's a man's chord, you could lose a finger.”

CONVINCINGNESS: Their name is a reference to a grisly incident in 1980 in which, well, a dingo ate a baby. Compared to the nuclear-level offensiveness of a lot of high school band names, that’s almost sweetly non-problematic.

MUSIC: Their actual music was provided by California alt-rockers Four Star Mary, who are still going and toured the UK in 2016.

WHO: A three-piece Toronto garage band, featuring Scott Pilgrim (Michael Cera) on bass, Kim Pine (Alison Pill) on drums and Stephen Stills (Mark Webber) on guitar and vocals. While aggressively average, they win a battle of the bands due to the man in charge of it being all manipulative and bastardy.

CONVINCINGNESS: They’re all in menial jobs, living in shitty flats and have unnecessarily complicated love lives. It's basically a documentary.

MUSIC: The film’s cast learned to play their instruments, performing music written especially for them by Beck, channelling his earlier, punkier days.

Timmy And The Lords Of The Underworld

WHO: Timmy Burch (voiced by Trey Parker), a student with learning difficulties at South Park Elementary, who becomes the lead singer of local thrash band Lords Of The Underworld. They immediately become really successful, being booked to open for Phil Collins at a rock festival, then replacing him as headliner when he quits.

CONVINCINGNESS: Phil Collins headlining a rock festival supported by a thrash band isn’t the most convincing thing ever, but nor was Phil Collins winning an Oscar, and that happened.

MUSIC: Timmy And The Lords Of The Underworld's music is provided by DVDA, South Park creators Matt Stone and Trey Parker’s comedy band, who have opened for Ween and Primus.

WHO: Heavy metal giants, idolised by Chris Cole (Mark Wahlberg), who fronts a Steel Dragon tribute band named Blood Pollution. When Steel Dragon fire their lead singer, Cole joins his favourite band, and his dreams come true… Or do they?

CONVINCINGNESS: Steel Dragon’s story was inspired by true events, when Tim “Ripper” Owens, lead singer of a Judas Priest tribute act, became the lead singer of Judas Priest after Rob Halford left, but was changed enough that Priest distanced themselves from it.

MUSIC: Band members were played by Black Label Society’s Zakk Wylde, Foreigner's Jeff Pilson and Jason Bonham (of a lot of bands, including occasional appearances with his dad’s pals in Led Zeppelin). At the end of the film (spoilers for a 19-year-old not-great movie incoming), Cole is replaced by Myles Kennedy.

WHO: A Manchester quartet based around the tumultuous pairing of songwriter/guitarist Charlie Pace (Dominic Monaghan) and his vocalist brother Liam, they achieve global stardom with mega-hit You All Everybody, before drugs and squabbles take over.

CONVINCINGNESS: Hmm. The thing is, they sound like a Britpop band and dress like a metal one. It just doesn't line up. When did you ever see Oasis in T-shirts with the sleeves cut off? If anything, this is Lost’s biggest mystery.

MUSIC: Drive Shaft’s music was written by Los Angeles musicians Jude Christodal and Chris Seefried, both of whom have had extensive careers writing the kind of songs that appear over the opening montages of hospital dramas.

WHO: Fronted by Aldous Snow (Russell Brand) – a swaggering charisma-machine with a messiah complex – Infant Sorrow are a fading rock band, unable to recreate their earlier successes. Snow is a mixture of Iggy Pop, Robbie Williams and Bono, claiming he wants to change the world while getting really smashed up and having sex a lot.

MUSIC: Brand threw himself into the role enough that the film’s soundtrack was marketed as an Infant Sorrow album. Songwriting was provided by Pulp’s Jarvis Cocker and The Libertines’ Carl Barat.

WHO: Bill S. Preston, Esquire (Alex Winter) and Ted Theodore Logan (Keanu Reeves) are two Californian dumbasses who, through time-travelling exploits and adventures in another realm, end up uniting the world with their music.

CONVINCINGNESS: The dumbass part is very convincing. Uniting the world through music? Maybe less likely – have you ever read YouTube comments?

MUSIC: While their garage thrashing is exactly as discordant as befits the characters (“Maybe we should learn how to play”), the licks that come when Bill and Ted play air guitar come with a lot more shred cred – in the second film, they’re provided by guitar-dad hero Steve Vai. Future, musically-trained versions of Bill and Ted perform looking like ZZ Top and sounding exactly like KISS.

WHO? At the heart of the ‘90s Seattle grunge scene, Citizen Dick are the grungest of the grunge, an all-flannel collective of aloof Generation X-ers led by Cliff (Matt Dillon).

CONVINCINGNESS: Matt Dillon borrowed his clothes for the film from Pearl Jam bassist Jeff Ament, which is pretty dedicated – grunge wasn’t a great time for hygiene. What’s more, joke titles that Ament came up with for songs ended up becoming real – Chris Cornell (who appears in the film) wrote Soundgarden’s Spoonman as a result.

MUSIC: The band behind Matt Dillon are none other than Pearl Jam, who came together properly during production - Eddie Vedder had just joined them when the film was made. With on-screen performances from Soundgarden and Alice In Chains, the movie more generally ended up coinciding with grunge exploding, and its soundtrack became genre-defining.

WHO? A Led Zeppelin-esque 1970s rock band who take an underage journalist under their wing for a tour, replete with sex, drugs and jumping off roofs.

CONVINCINGNESS: Writer-director Cameron Crowe based the band on his own teenage adventures following the Allman Brothers on tour – a lot of incidents in the films are lifted straight from real life.

WHO? Nigel Tufnel (Christopher Guest), David St. Hubbins (Michael McKean), Derek Smalls (Harry Shearer) and an endless succession of ill-fated drummers are Britain’s loudest band, prone to emotional fallings-out, getting stuck inside props and getting lost on the way to the stage.

CONVINCINGNESS: Bands from Nirvana to Zeppelin to the Misfits have all spoken about how true-to-life the clumsiness of being in a band is portrayed. Ozzy Osbourne has reported getting lost backstage several times, and Aerosmith’s Steven Tyler apparently didn’t even find the film funny upon first viewing, it seemed too realistic.

MUSIC: The main cast members are all accomplished musicians, and toured and released albums as Spinal Tap. They’ve played at Live Earth, headlined Wembley, and performed on the main stage at Glastonbury.

Spinal Tap reform for one night only in New York City