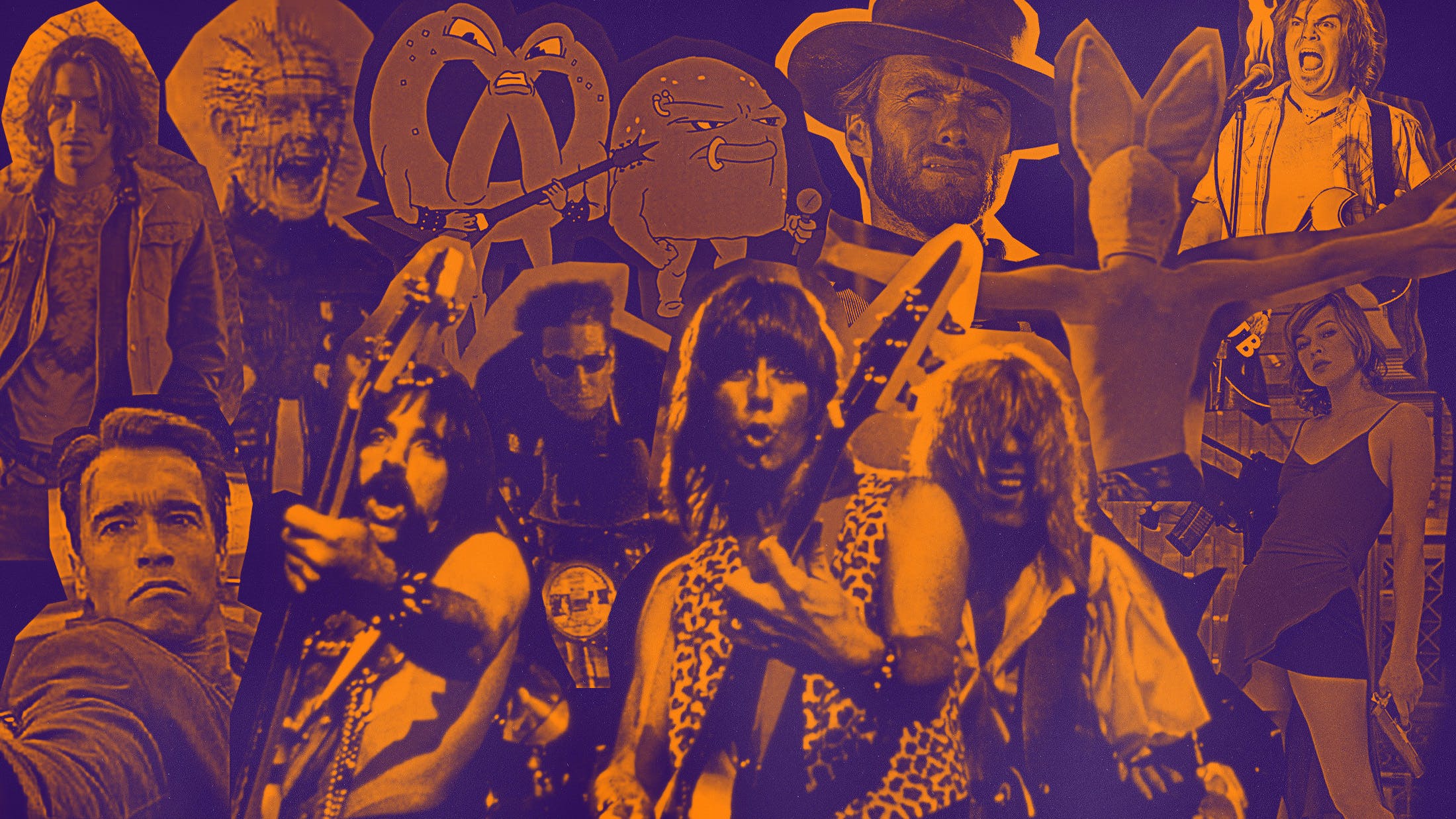 Cinema and heavy metal have long been intimate bedfellows. Black Sabbath – the forefathers of the entire genre – took their name from the Mario Bava’s 1963 horror anthology flick. Iron Maiden have borrowed liberally, with songs like Children Of The Damned (Village Of The Damned, 1960), Where Eagles Dare (Where Eagles Dare, 1968) and The Wicker Man (The Wicker Man, 1978) all having some basis on the silver screen. Metallica even collaborated with legendary soundtrack composer Michael Kamen (Highlander, Lethal Weapon, Die Hard, X-Men) for their S&M extravaganza.

For purely geeky purposes, we thought it’d be interesting to rank the 15 most metal songs on movie soundtracks. So grab the biggest bucket of popcorn you can, switch off your mobile phone (er, unless you’re reading on it…) and enjoy!

The upside of getting Mastodon to contribute this brilliantly tongue-in-cheek banger right at the start of your movie? It’s awesome. The downside? The whole film is doomed to spiral downhill from that moment. Even still, this impossibly-titled feature-length adaptation of the cult animates series Aqua Teen Hunger Force has earned itself some degree of immortality by anthropomorphising the Atlantan prog-sludgers into pretzel (Bill Kelleher), Icecaps candy-box (Troy Sanders), nachos (Brann Dailor) and history’s most aggressive gumdrop (Brent Hinds) to deliver the time-honoured ‘turn off your phones and shut up for the duration’ message to unruly cinema-goers.

By this somewhat shoddy third offering, the cinematic embodiment of Clive Barker’s tale of a puzzle-box that opens the gates to a weird, sadomasochistic version of hell had just about overstayed its welcome. The bang-on brilliance of Motörhead’s outstanding cut ironically offered something close to salvation, though. Written by Lemmy for Ozzy Osbourne’s 1991 No More Tears album, but borrowed back when the opportunity arose to contribute to this soundtrack, it’s an outrageously perfect fit. We bet Lem and the boys would’ve made Ol' Pinhead and the Cenobites look like angels by comparison on any night out, by the way.

Narrow minds might question the inclusion of Jerry Goldsmith’s masterfully macabre composition on this list, but anyone who’s ever borne witness will confirm its plunging proof that guitars and drums aren’t necessary for the invocation of pure evil. Covered by Mike Patton’s Fantômas and heavily sampled by Dee Snider side-project Van Helsing’s Curse, metal cred has long since been guaranteed. Still not convinced? Bear in mind that, translated to English, its bastardised Latin chant professes, 'We drink the blood / We eat the body / Raise the body of Satan / Hail, hail Antichrist / Hail Satan!' Seriously, what’s more metal than that?

When it came to James Cameron’s ‘everything bigger, everything better’ approach towards the sequel to his seminal 1984 cyborg classic, that even extended to the soundtrack – which is really saying something given the industrial iconography of Brad Fiedel’s unmistakable central theme. Calling on Guns N’ Roses at the absolute height of their powers, they might’ve just managed it with a machine-tooled classic that brilliantly embodies the swagger and freight-train velocity of the blockbuster sequel. Even the music video is a stone-cold classic. Fun fact: there's a bit in the movie where Arnie's indomitable T-800 actually produces a gun from inside a box of roses. Clever, eh?!

Another slab of tongue-in-cheek ’90s Schwarzenegger brilliance, another absolutely smashing soundtrack. Also featuring box-fresh bangers like AC/DC’s pointedly-titled Big Gun, Anthrax’s Sound Of White Noise, Def Leppard’s Two Steps Behind, Queensrÿche’s Real World and two from Alice In Chains: What Hell Have I and A Little Bitter, this was an absolutely belting album throughout. Our pick has to be this slinking classic from Megadeth, mind. Written during Dave Mustaine’s prolific Countdown To Extinction sessions, it packs a shedload of too-cool mid-paced riffage and a Dave’s spoken-word contributions deliciously evoking unhinged uber-classic Sweating Bullets. It’s fitting, given this is the bonkers movie that features the Austrian Oak dishing out crazed one-liners like, “RUBBER BABY BUGGY BUMPERS!”

The Crow might just be the most metal movie ever. The tale of rockstar Eric Draven, who finds himself raised from the underworld as the eponymous Crow to avenge his death as well as the rape and murder of his fiancée, production was stunted by the accidental killing of star Brandon (son of Bruce) Lee when a prop pistol accidentally fired live debris – but the move eventually made it to release anyway, completing an eerie resurrection of its own. The soundtrack is an incredible tribute in its own right. Goth legends The Cure recorded new track Burn specially. Stone Temple Pilots re-wrote Big Empty following Lee’s death. Nine Inch Nails covered Joy Division’s Dead Souls. The stand-out is Pantera’s cover of Oregonian hardcore crew Poison Idea on The Badge.

Has there ever been a better match of filmmaker and musician than mid-nineties David Lynch and Trent Reznor? Pairing the industrial overlord at his most trippily tortured with the Twin Peaks legend on full nightmare neo-noir mode, the Lost Highway soundtrack actually sees a swathe of collaboration. Trent added sound to the infamous VHS scenes, contributed this twisted classic and the more industrial Driver Down as well as arranging a separate soundtrack album featuring Angelo Badalamenti and Barry Adamson’s original score alongside tracks from David Bowie, Lou Reed, Rammstein and The Smashing Pumpkins. Quite the trip.

You’ve probably never heard of Tim Hunter’s lingering crime-drama River’s Edge. Hell, you mightn’t even have heard of seminal Atlantan thrashers Hallows Eve. That their chaotic contribution to this long-forgotten soundtrack stands shoulder-to-shoulder with (and arguably outshines) the four(!) Slayer tracks on the accompanying LP should really tell you something, though. An independent production starring heavyweights like Keanu Reeves, Dennis Hopper and Crispin Glover dealing with a group of Californian teenagers processing the murder of a good friend and the harrowing disposal of her body, Lethal Tendencies doesn’t capture much of the movie’s subtlety. It does, however, perfectly evoke the emotional tumult churning beneath the surface.

A fucked-up film calls for some fucked-up sounds. Harmony Korine’s (Kids, Spring Breakers) debut feature – exploring the disparate, troubled existences of a strange cast of characters in the wake of a devastating tornado having ripped apart their Midwestern township – certainly falls into the former category. Enlisting a roster of bands running the gamut from black metal to outright powerviolence, the soundtrack more than measures up. Bethlehem, Mystifier, Absu, Bathory, Brujeria, Eyehategod and Sleep all have large parts to play in that. It’s this specially commissioned ‘Love Theme’ from Californian mentalists Spazz, all aural violence and psychological clamour, that really haunts our memory, though. Wonderfully nightmarish stuff.

While not strictly metal, any metalhead who can hear the famous strains of Ennio Morricone’s 1966 masterpiece without feeling a prickle run up their spine should really check their pulse. Metallica’s go-to opening music since 1983 (even eventually covered by the thrash titans), his iconic soundtrack to the final shoot-out of Sergio Leone’s even-more-iconic Dollars Trilogy has found itself ingrained into metal folklore. Beyond that, the soaring strings and Edda Dell’Orso’s almost siren-like vocals – like much of Ennio’s work – set a level of invention, drama and grandeur that transcended traditional classical boundaries, erring closer to the musical excesses a plethora of rock bands (from Radiohead to Muse to Massive Attack) have explored since.

In retrospect, bringing together two of the early-’00s favourite sources of parental outrage seems like an absolute no-brainer. An ultraviolent soundtrack to the ultraviolent cinematic adaptation of the ultraviolent videogame, Slipknot's My Plague ticked a hell of a lot of boxes for the moral outrage brigade. Even still, watching back the iconic music video which intercuts shots from the Milla Jovovich-starring action-horror extravaganza with footage from the Iowans’ chaotic 2002 performance at the London Arena makes for a thrillingly skin-crawling reminder of the frenzied madness that seemed to surround The ’Knot at the time. Special mention should also go to the inspired use of Disturbed’s Down With The Sickness in Zack Snyder’s 2004 Dawn Of The Dead remake a few years later.

4. Tenacious D – Beelzeboss (The Final Showdown) (Tenacious D In The Pick Of Destiny, 2006)

When it was announced that Tenacious D were going feature-length, the question on every metaller’s mind was how they would cook up a soundtrack to better The Greatest Song In the World. Upping the narrative stakes, re-enlisting Dave Grohl to play the fallen one (as well as to liberally peel off a few sick licks) and really playing the contrast between musical ‘good’ (goofy, mostly acoustic) and musical ‘eeeeevil’ (tight, sexy, electric) for laughs, they just about managed the impossible with this climactic set-piece of a tune. Now, if we could just manage to get the image of Dave filling Cage with his “hot demon gel” out of our heads, that’d be great…

A legendary rockumentary requires an equally renowned soundtrack. Following the highs and lows that befall the members of the titular, imaginary NWOBHM outfit – co-frontmen David St. Hubbins and Nigel Tufnel, bassist Derek Smalls, keyboardist Viv Savage and a revolving-door of ill-fated drummers – This Is Spinal Tap should be regarded as required viewing for any aspiring metalhead, regardless of musical content. With some of the most gleefully cringeworthy lyrics ever committed to tape ('The bigger the cushion, the sweeter the pushin’ / That’s what I said / The looser the waistband, the deeper the quicksand / Or so I’ve read…'), some genuinely tasty riffage and a bottom-end that compelled a constellation of rockstars wielding basses to perform the song at 2007’s Live Earth in Wembley Stadium, though, this is an absolute cracker in its own right. Plus, it goes up to 11!

John Woo’s bonkers second instalment might be the most tryingly overindulgent of Tom Cruise’s high-octane spy franchise. Its soundtrack, however, was an absolute banger. Boasting Limp Bizkit’s Take A look Around, Rob Zombie’s Scum Of The Earth, Chris Cornell’s Mission 2000 and Foo Fighters (feat. Brian May!!!) covering Pink Floyd’s Have A Cigar, it barely needed the involvement of metal’s biggest band to ink itself into rock history. This rare-as-hen's-teeth standalone single from the San Franciscan titans makes for some damn tasty icing on the cake, mind: a slamming reminder of what they were capable of before the ear-piercing snares and general befuddlement of the St. Anger era.

The king of metal soundtrack albums. The Judgment Night OST actually managed the rare feat of completely overshadowing the movie for which it was commissioned. Built around the concept of pairing hip-hop artists and heavy rock bands, it features Helmet & House Of Pain tearing up Just Another Victim, Biohazard & Onyx detonating the movie’s title-track and Therapy? & Fatal delivering the righteous fury of Come And Die. It takes this collaboration between Ice-T and Slayer, mashing up three tracks by legendary Scottish punks The Exploited, to really capture the darkness and chaos of the Emilio Estevez/Cuba Gooding Jr–starring action-thriller.