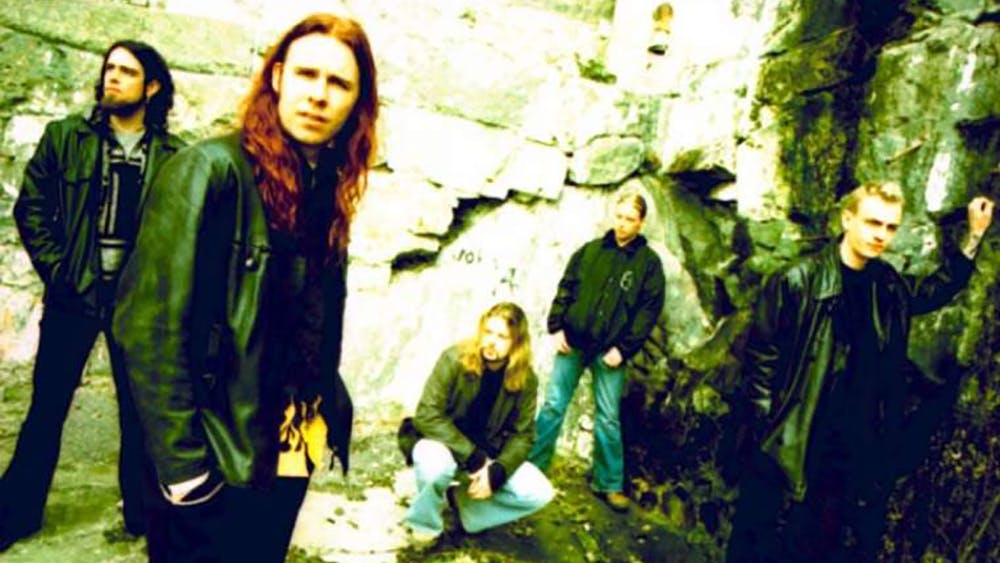 A band’s personal and professional fortunes don’t always mirror each other. Just ask In Flames. In the late ’90s, on the eve of a new century, the Swedes were riding a tidal wave of momentum, having released a trio of albums – The Jester Race (1996), Whoracle (1997), and Colony (1999) – that married conceptual ambition to melodic death metal. Logistically, In Flames were operating at the peak of their powers, establishing the ‘classic’ line-up that would remain until 2010: drummer Björn Gelotte cementing the move to guitar he made on Colony – replaced behind the kit by Daniel Svensson – and Peter Iwers succeeding Johan Larsson on bass.

Things weren’t going swimmingly for Anders Fridén, though. In Flames’ frontman was dealing with the end of a long-term relationship, which had brought to a head his similarly lengthy struggle with the responsibilities of being different things to different people. They say great art comes from great pain, and so it was to prove for Anders, whose thoughts coalesced into something – or rather someone – significant. A figure eventually appeared to the frontman, one malleable but miserable, whose efforts to fit into every situation matched his own. And with that, ‘Clayman’, a manifestation of Anders’ desire to become a more “rock solid human” was born.

It was a quick birth, too, with In Flames’ fifth album arriving only a year on from its predecessor. It’s unclear whether this picking up of speed benefitted Anders’ changing lyrical focus, but the flesh-and-blood man who had conjured the Clayman soon dispensed with fantastical imagery in favour of something more personal. As a creative left turn, this act of soul bearing was matched by an increased focus on melody and the inclusion of synths – ushering an era of experimentation that would gain momentum on subsequent releases. “With every album we felt the need to challenge our listeners and ourselves,” reflects Anders. “The three albums that came before Clayman were a trilogy, in a lyrical and musical sense, so we felt we had to take an extra leap for this one.”

Bullet Ride and Only For The Weak confirmed Clayman as the sizeable jump its authors had intended, with bold new sounds delivered with trademark precision, and becoming some of their biggest and most enduring tracks in the process. And while some fans of the heavier early days inevitably bemoaned this sonic sea change, Clayman successfully graduated In Flames to the world stage, while capturing the imaginations of a generation of metal bands, particularly American ones, eager to embellish their own darkness with inventive new shades. Not that Anders acknowledges this influence.

“We’ve never looked to other bands to find out if we’ve influenced them,” laughs the 47-year old, recalling the legacy of an album celebrated with a deluxe reissue of remastered and re-recorded material. “We made four albums before it and have made eight since then, but it feels like Clayman was an important central point for us,” reveals Anders, who now has a clothing line named after it. “I think the fact we’re celebrating it in this way now, and still playing many of its songs, says a lot about an album that’s 20 years old.”

Here, as we mark two decades of In Flames' centre point, Anders guides us through the record's creation and impact…

Clayman Can Be Viewed As A Break-Up Album

“I had come out of a long relationship. It was inevitable it was going to end, which was a difficult thing to know, especially when all of the people around me were aware of it too. The longer I dragged the situation out, the deeper into the abyss I went, so to speak. The band was getting more and more attention at that time, and people were showing us appreciation, which made me want to find myself even more because I’d be on the road knowing I had to go back to a situation that wasn’t good for anyone.”

Anders Wanted To Get Closer To Fans With His Lyrics

“I wanted to make a big left or right turn in my life, and I knew I had to write down what I was feeling to get it all out of my system. I thought doing it in a more personal way would allow me to reach more people. It was obviously going to be easier to get closer to others if I made something from what was happening to me rather than something fantasy based.”

But Anders Didn't Want Fans Getting Too Close

“Even though the lyrics were more personal, I still used metaphors in my writing. I wanted people to be able to relate to the lyrics, but I also wanted them to have their own interpretations that related to their experiences. I believe a song stays with someone if it remains close to their heart, so I didn’t want to have to tell someone their interpretation was wrong.”

There Was Tension Between Band And Producer

“Fredrik [Nordström] had recorded all of our albums up to Clayman. We’d talked about making this album with Daniel Bergstrand, who ended up producing the album we made after Clayman, Reroute To Remain [2002], but he wasn’t able to do it in the end. So we decided to do one more with Fredrik, but we were a little sick of each other by then. Fredrik was in a new relationship, so he wanted to work from 9am-5pm. We thought: ‘Fuck that! We can’t record heavy metal from 9-5!’ We wanted to start at 5pm, drink beer, and work through the night, so Fredrick suggested we do that and he would come in during the day to correct what we’d done. I don’t want to take anything away from him because he’s been great for our career and he’s awesome, but there was some turmoil.”

Anders Struggled With Recording Only For The Weak

“I didn’t know what to do with it at first. I didn’t know where to put myself in the mix. The song felt like an anthem from the beginning, and the other guys had done an amazing job with their parts, so I wanted to do it justice. On heavier songs it had been easy for me to scream all the way through, but I was dealing with something so different in terms of melody and pace. I don’t give up on things and am very determined, which came in useful then because it took me a while to find the right groove. I’m glad I didn’t know then it would become one of most popular songs, because that would have been a lot of pressure. It’s the song we played at a festival when the jumping of the crowd triggered an earthquake alarm. The festival had to move the year after because of that. That’s real heavy music!”

…As The Future Repeats Today Wasn't Political When It Was Written, But It Can Be Now

“I’m sure the inspiration for it wasn’t political, and it wasn’t intended to be, but listening to it now it seems like a really political song. It was focused on me, for sure, and my hope I wouldn’t repeat my past mistakes. It could so easily be adapted to the world leaders of today, and the generation that’s growing up now, with the hope they’ll break down the walls between nations and learn the lessons of history.”

“Clayman was a like a therapy session for me. I wrote everything down – all the sadness, darkness, and desperation – and gave it to the world, which meant I didn’t have to deal with it anymore… sort of. It was like taking a letter into the forest and burying it deep down in the earth.”

In Flames' Clayman – 20th Anniversary Edition is out now via Nuclear Blast.

The Halo Effect – Days Of The Lost

Megadeth, Lamb Of God, Trivium and In Flames announce rescheduled Metal Tour Of The Year

The Metal Tour Of The Year – featuring Megadeth, Lamb Of God, Trivium and In Flames – is finally arriving in a few months' time…

Megadeth, Lamb Of God, Trivium And In Flames' Metal Tour Of The Year Rescheduled To 2021

The Metal Tour Of The Year – featuring Megadeth, Lamb Of God, Trivium and In Flames – is coming in 2021.

Trivium and In Flames will open for Megadeth and Lamb Of God on their massive North American co-headliner.

At The Gates, Opeth, Of Mice & Men and more perform In Flames' own festival, Borgholm Brinner.