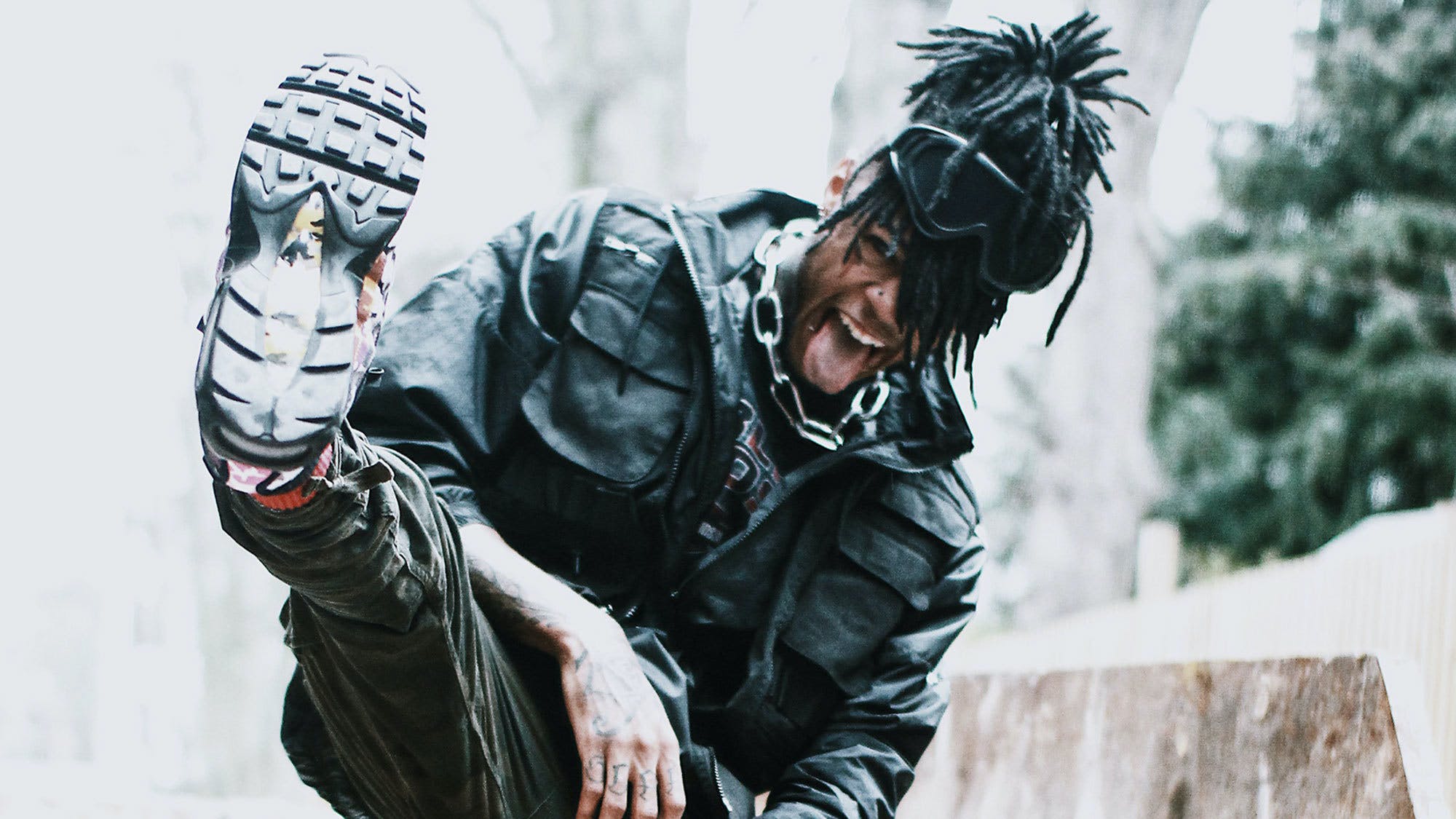 These words, echoing the advice his mum’s boyfriend once gave him, have become something of a mantra for one of the most exciting new artists in heavy music. He is Scarlxrd, and his abrasive concoction of trap, industrial, metal and hip-hop puts him at the forefront of a new movement of music, filled with fans who don’t care about genres or cliques – they just want to have a good time. His live shows are war zones; moshpits erupt to bass-heavy hip-hop; horns are thrown to his nu-metal bounce, and he brings the fire.

We sit with the 24-year-old Scar (real name Marius Listhrop) in a swanky, label-owned house in Camden, London. Our room is a makeshift studio with a mic booth in the corner, and straight away he’s tapping away at the computer, excited at the mere prospect of being able to create something. Eventually he calms down and sits opposite Kerrang!, sipping his coffee, oozing charisma and charm, emblazoned in Supreme, North Face and Nike branding. He looks exactly like his audience does.

Scarlxrd grew up immersed in music. Between his old-school raver mum, her then-boyfriend, and his father who he’d see at weekends, the young Marius was exposed to dub, indie, drum’n’bass, techno, funk, disco and beyond. He even learned how to breakdance and spin on his head.

And then heavy music came calling. Like so many in the early noughties, Scarlxrd found himself swept up in a love affair with nu-metal, after his cousins introduced him to the sounds of Limp Bizkit.

“I went to this under-18s event called Generation Rock in the Midlands and headbanged until my neck was sore,” he remembers with a smile. “You listen to nu-metal and it’s like, ‘Yeah, this is clearly for the fucking kids! I feel cool, I wanna skate, I wanna fuck this, burn this, fuck you!’ That energy is so essential for each generation. Each generation must have that sonic outlet. They need it because there is nothing worse than living a mundane life of growing up without a soundtrack, it’s fucking dull. It’s like watching a movie without sound – it needs a score. As a musician I try to make that score.”

Such an animated, driven (and sweary) personality was never going to find himself stuck behind a desk dreaming of stardom – he was destined for the spotlight. And where does a young guy go when bursting with barely containable charisma? YouTube.

From the ages of 17 to 19 Scar was chirpy bedroom vlogger Mazzi Maz, and made a lot of money “before YouTube went to shit”. But he isn’t ashamed of his past, seeing it as an outlet for his entertainment at the time.

“YouTube teaches you the fundamentals of running your own business on the internet,” he continues, adopting a more serious tone. “Fuck all the videos, think about what goes into that craft. The record labels meet me and go, ‘Oh, you’re really switched on.’ Well duh, you dickhead, of course I am, what the fuck do you think I’ve been doing for the past four years!?”

We’re talking to Scarlxrd at a pivotal time. The day before, he announced a U.S. tour with Bring Me The Horizon. The day after he’ll announce his new album Infinity – a swift follow-up to the metallic introduction of last year’s DXXM album.

Admitting that DXXM was tied to self-loathing, Infinity is a much more aggressive and confrontational listen, pointing the crosshairs directly at Scar’s own chest, with the chorus to HXW THEY JUDGE screaming, ‘You’re not my enemy, I am my enemy.’

Describing every song as a battle with himself, Scar says his music is drawn from within. But not just emotionally, it’s a physical task, often forgetting to breathe when screaming at the top of the top of his lungs.

“I did the long scream in SX SAD and the room started spinning, I sat down and my arm started twitching. I was deprived of oxygen and had to gather myself. I love it.”

It’s this hyper-aggressive mix of harsh vocals and bass-heavy trap that sent Scarlxrd’s YouTube views through the digital roof. Soon he was selling out shows and being played on Radio 1, but fame has its consequences. He admits that people “switch on you” once they cotton on to your notoriety, but his inherent ‘fuck you’ attitude to everything has prepared him for dealing with any negativity life can throw at him.

“If I wasn’t a musician I’d probably be a lawyer, because I’m fucking cold,” he laughs. “I’m built like nails, but some artists can find themselves in a position where how people perceive them chips away at their spirit. That’s the struggle. You’ve got to stay normal on the inside.”

At just 24 Scarlxrd has a purposeful outlook on life. Throughout our time together, he barely makes eye contact, staring into the middle-distance, deep in thought. He knows what’s important, who’s important, and comes across as more comfortable in his skin than someone twice his age. He talks intensely about his goals and his spirit, knowing that he can’t spend his time getting wasted and ruin all the hard work he’s put in to get where he is today.

He doesn’t live a rock’n’roll lifestyle, instead spending most of his time with his cats and reading with a cup of tea. On tour it’s a military operation of early bedtimes, gym sessions, and chill-time – keeping his head in the game, always.

“I talked with my mum when I was 16 and said, ‘I don’t just want to exist, I want to live,’” he remembers, gradually starting to bounce in his chair. “I wanted to really experience. I’m so passionate about myself and my craft, it can come across as quite selfish, but that’s just how it fucking is. People who haven’t got with the programme aren’t in my life anymore.”

But deadweight isn’t the only thing Scar has ditched recently – he’s also removed his iconic Tokyo Ghoul mask for new album Infinity. He tells us that it helps bring a more personal energy to the record.

“There’s nothing more personal than dropping the one thing that everyone thinks they know me for,” he says. “My image sells, we know that. So what happens when I drop that? Do I become irrelevant? Or do I increase in infamy? It’s a beautiful challenge.”

“How they presented themselves didn’t define their ability to produce incredible sonics, and I feel like that’s where I am. I can’t wait to be sitting there, old as shit, with people saying to me, ‘My favourite era was No Mask,’ or, ‘I loved it when your hair was this long.’

“Slipknot change their masks and you can pick your favourite era based on the look they had, and I feel like that’s what will happen now my mask is off. I’m still gonna bring the noise, though – the music is just as fucking horrible. I don’t want people to think I’ve taken off the mask and I’m going to make a fucking country record now. I can scream better without it, trust me.”

Scarlxrd unzips the bumbag he’s had strapped tight to his chest for the past hour. He apparently carries it with him everywhere, filling it with notes of everything he wants to accomplish. On one page in particular is a sketch of an oval with a curious collection of other shapes drawn inside…

“That’s my stadium tour right there,” he says, beaming with pride. “I know I have the tools and the mind to do it. I have the body and soul to do it. So let’s fucking do it, then! You think you’re gonna wake up one day and you’ve sold out Wembley? Fuck off. Get yourself in the fucking booth, man.

It’s just a matter of time.

Scarlxrd's new album Infinity is out now. He plays All Points East festival in London on May 31 – get your tickets now.