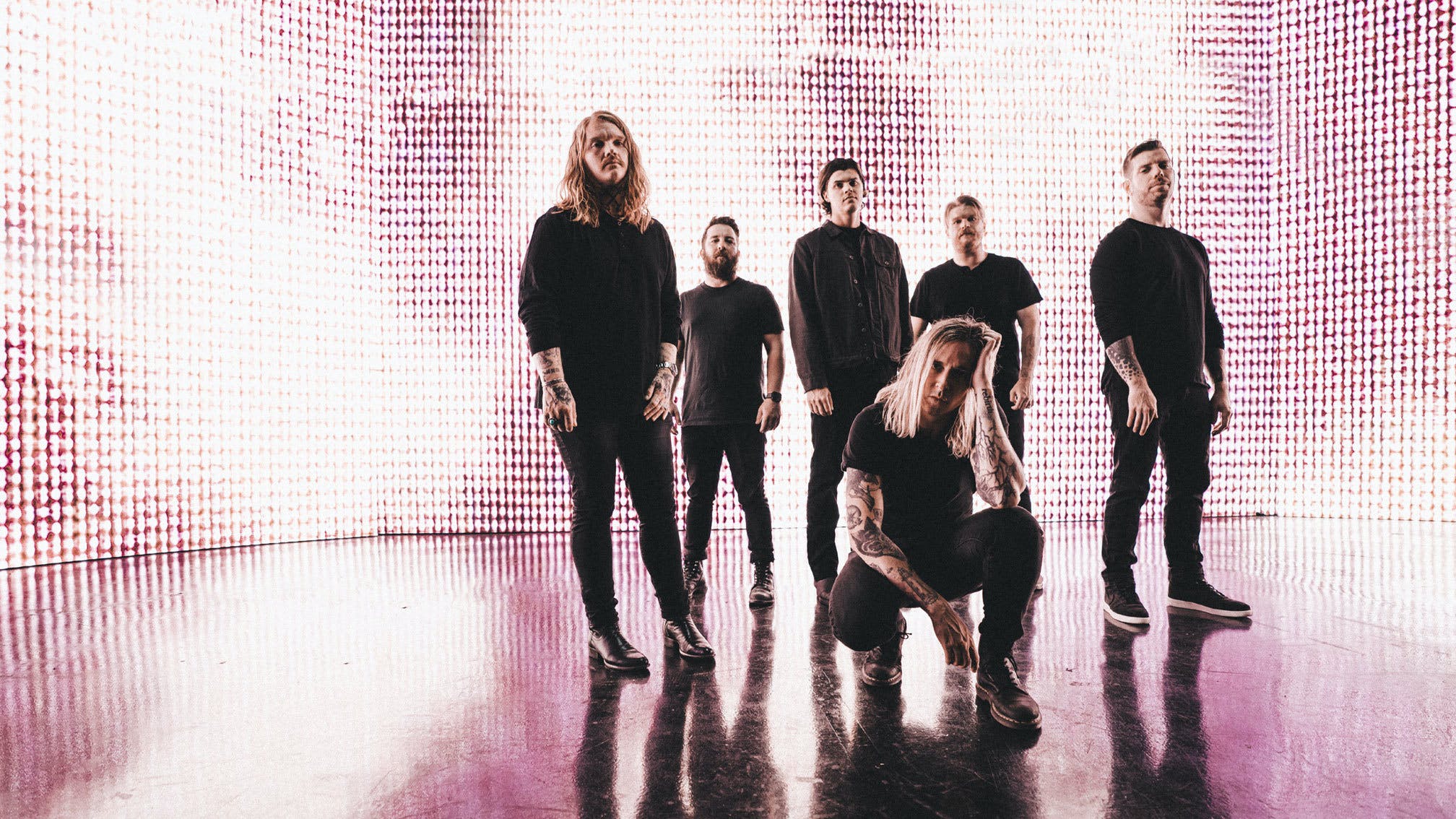 On 2018 comeback record Erase Me, Underøath moved to a more mature sound without losing the emo credentials they built their fanbase on. The success and re-ignition of friendships meant this wasn’t just a quick and easy cash-grab: this was a band back for good, and feeling excited about their newly-aligned future. Like everyone else, though, the pandemic meant that their plans had to be changed, adapted, and changed again.

Now four years on from Erase Me, Underøath are back with Voyeurist. Free from shackles and forging their own path, the Florida titans created the album completely independently with no outside influences – a move that saw them revisit their roots to get the creative juices flowing. Here, vocalist Spencer Chamberlain and guitarist Tim McTague tell us absolutely everything…

By the time Voyeurist comes out, it would’ve been nearly four years since Erase Me. Have you been sitting on this album for a while?
Tim: “Yeah, even before COVID hit, we knew we were going to take the time we needed to write and make the record – it probably would have only come out a few months before it’s coming out now, even if COVID hadn’t happened. The worst part about it to me was that we finished it at the end of February [2021].”

You chose to write and record it all independently. What was that like, and how did it make Underøath grow as a band?
Spencer: “So there are the four main writers in the band – which is Tim, myself, Chris [Dudley, keyboard] and Aaron [Gillespie, Drums]. On Erase Me, there were songs coming in from groups of two, some songs were written in groups of three, but I feel like the best songs on that record were actually written as the four of us. I think the biggest thing that changed, looking at it from the outside, is that when we came back to Voyeurist we decided to not do it that way. We decided it was best to do it as the four of us in a room. It’s the four dudes jamming like it would have been pre-being in a big band: what did you do when you were young, and you didn't have recording equipment, and you couldn’t send stuff over the internet? To me, being in the room together meant there is that human interaction that makes it so special.”

So did being physically present with each other give you a new lease of life?
Tim: “I don’t think that we’ve ever created music that I’m wholly proud of without a lot of tension. And with this one, we had conflicts but we just addressed it differently. Now it’s like, ‘Let’s just do what we want, and try to make it fun but not shy away from tough conversations. If you think someone’s fucking up the song, tell them and we’ll work it out.’ I think that’s what I’m excited about moving forward: just being very frank and direct, but not dicks!”
Spencer: “There are people not necessarily fighting for their part because they’re in the headspace where it’s like, ‘Everyone wants the same thing.’ And that’s for the song to be the best that it could possibly be. If this guy is fighting for something then it’s not in a selfish way; it’s because they dig it. And if they don’t like it, then let’s work until we all dig it. We are closer now because we did this record ourselves; it took a lot of respect and patience and understanding for us to be able to push each other to make this record on the easy days and the tough days. No-one broke down or wanted to quit, or got their feelings hurt so bad that they didn’t want to come back.”

It feels like a very cathartic album, like you’re letting go of a lot of pent-up feelings. Where did Voyeurist’s themes come from?
Spencer: “There were a lot of things we weren’t allowed to say being a Christian band growing up. As our last couple of records haven’t been from that point, you’re always scared you’re going to offend someone. But I think this time it was like, ‘Let’s say what we need to say.’ And even though it’s not a COVID record, we did make it during this time of uncertainty. When we started writing this thing we didn’t know if we were going to have jobs anymore; we didn’t know live music was going to come back. And I feel like that uncertainty fuels deep down inside you – whether you realise it or not. You’re angry, you’re uncertain, you’re anxious and those emotions are buried deep. Even though you’re being positive and writing lyrics about other things, there’s still a lot of real-life shit going on.”

In terms of that real life, the song Pneumonia holds a deep, personal meaning to you, Tim, as it reflects your father passing away. How does it feel to have that track on the record?
Tim: “I can’t much talk about it without choking up still. We had just written Damn Excuses, and the next day we were trying to play around in the more atmospheric space. But I was not feeling it as it was the one-year anniversary of the passing of my dad. I was just in my head, and then I went and saw my mom that day, and then obviously told the dudes that night. So, for the first time ever, Aaron and Spencer sat me down and were like, ‘We always tell our story, but this is yours. So can you help us write some of the lyrics to the end?’ It meant a lot to me, and it’s cool to be able to actually say something about that experience.”

Also on the album is a collaboration with Ghostemane. How did that come about?
Tim: “Aaron and Spencer reached out to Ghostemane on Instagram about working with him and we got nothing. Weeks went by and nothing happened, but then the dude literally hit up Aaron just said, ‘Hey, I woke up today wanted to let you know that I appreciate what you guys do, and I wouldn’t be where I am without you guys.’ So we chipped away at the track it was very, very quick and very, very simple. It was just super-rad to see. He put a lot of energy into it, and was really stoked to be there and it showed.”

During this whole time you also created a fan experience with your Øbservatory livestreamed shows, later turning them into vinyl. Is the livestreaming element something that you can see yourselves doing even when things go back to ‘normal’?
Spencer: “First of all, the Øbservatory shows were probably the scariest shows we’ve ever done! We were either the first or one of the first to do it actually live – livestreams were happening at the time, but they were all pre-recorded, so you could fix stuff and redo it if you fucked up. For some reason, we decided to just do it live – the minute it was streaming we were actually performing it in real time. I think the future of livestreaming is being able to do a show or maybe two shows on a tour. You know, football games are played at sold-out arenas, and you can still watch them on the TV, so if we’re just doing a tour in America, it means someone in Brazil or Switzerland can also tune in to watch it.”

Finally, how do you think bands will operate as we come out of this pandemic? What do you think will change for you?
Tim: “I’d like to see more packages that go outside the usual genres. I’d love to tour with Ghostemane and one other hip-hop guy and then bring another heavy rock band to even it out. As far as records go, I just don’t think records matter. I mean, even as much as Voyeurist means us, I just don’t think that’s where the culture is. For us, I think what I would like to see us do is just do more songs, more content, more collaborations. I think that’s where the rock world kind of has to pay attention to what’s actually working right now, which is all hip-hop and pop, and it’s collabs and singles. We’re not on a label anymore, and this gives us the chance to play around, figure out what works and really decide where we want to go. I just think we need to try a lot of different things.”