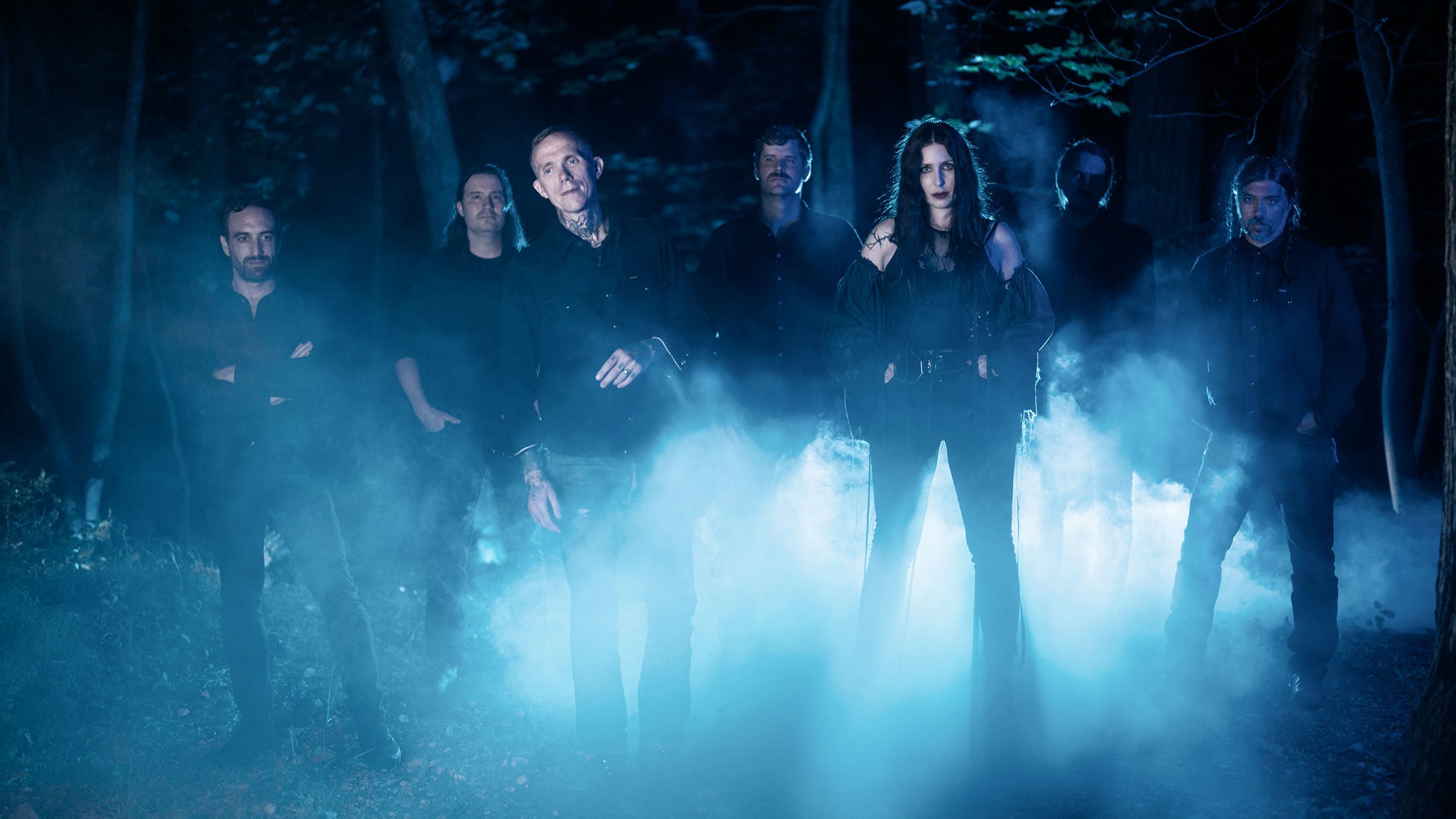 You might call them the Magnificent Seven. After many months spent collaborating over a distance of several thousand miles, this summer the authors of the one of the year’s most inventive albums convened at God City Studio, in Salem, Massachusetts, to supervise the final mixes of their new creation. Gathered around the console were the four members of Converge – vocalist Jacob Bannon, bassist Nate Newton, drummer Ben Koller and guitarist Kurt Ballou – the metal and folk singer-songwriter Chelsea Wolfe, her bandmate and writing partner Ben Chisholm, and Stephen Brodsky, the guitarist with New England underground legends Cave In. Comprised of 11 songs, the album in question is titled Bloodmoon: I, credited to Converge and Chelsea Wolfe.

Like all albums that you will hear this year, this one was made in unusual circumstances. After the lights of the world were extinguished in March 2020, Jacob Bannon spent the next the next 18 months venturing no further than ten miles from his home. As Bloodmoon: I began to take shape, Chelsea Wolfe dispatched demo tapes recorded in her home near Sacramento, in Northern California. But as the remote sessions began gaining traction in the winter of this year, the record’s seven participants knew they were onto something.

Elaborate, dense, varied and wild, Bloodmoon: I is the sound of music pushing at the boundaries of ideas and execution. As Jacob Bannon says, it is a creation in which its participants “sacrificed their egos for the good of the project”. We sat down with Jacob and Chelsea to get the skinny on this, and on much more…

Let’s start at the beginning. How did Converge and Chelsea Wolfe combine?

Jacob Bannon: “I think it was about 2009 or so when I picked up Chelsea’s second album, Apolaklypsis, and I was completely enamoured by it. I thought it was a wonderful record. Somehow at that time I connected with Ben [Chisholm], and after that we ended up meeting when we were on tour – I want to say in Seattle, or at least close to Seattle – and I believe that both Chelsea and he were in the area and came by the show. We stayed in touch since then, in a variety of ways. I did a few projects with Ben… and we just became good acquaintances and fast peers. In the Converge camp we always thought that if we were going to do something more expansive and dynamic, and grow our world, we’d do so by playing with musicians who had other creative voices. When we started talking about those things, the idea of working with Ben and Chelsea really started to come up quite frequently. I know it seems like a long time between 2009 and now, but there’s a slow-burn in bringing people together. In 2016 we did a few shows in Europe, one of them being in the UK, in London, as Converge Bloodmoon, which is essentially what this is. It’s expanded ideas on Converge songs… and we were lucky enough to have Ben and Chelsea and Steve Brodsky along with us for that initial live incarnation. The chemistry was really good and we all got on quite well and we wanted to continue things after that.”

Chelsea, how did you go about finding your way into the Converge sound? They’re hardly a pickup blues band in which you can just join in during the middle-eight.

Chelsea: “Well, yeah. Converge exists in a world where they forged their own path, musically. Obviously it’s rooted in hardcore, but they’ve done their own thing with it and become leaders of their own realm. I feel like my own projects have always done their own things in different genres – the rock world is the base, but we’ve experimented with electronics and brought folk music into it as well – so in a way I think that our musical sensibilities merged pretty well because we’re open to trying our own ways of doing things. The first time we got together and began working on the sets for those 2016 shows, the chemistry was pretty obvious. It melded easily.”

What were the mechanics of recording Bloodmoon: I during these trying times?

Jacob: “Even during the 2016 shows we were talking about trying to continue this. Coming back, I remember speaking with Nate about how excited we all were about doing something, and how we were going to prioritise this as much as we could. Obviously that’s challenging because there are so many moving parts and logistical things that need working out. We’re seven adults with seven professional and personal lives, which makes it hard to get everything lined up. So we started loosely throwing demo ideas at one another and I think everybody was writing in some capacity – either quite intently or just casually. Since we all played together and bonded in that time, I think we all know what we wanted to achieve together. It wasn’t a big question of how it was going to sound, it was more a question of whittling material. And before you know it, we had quite a few demos coming from all sides.

"The pandemic really challenged us. I know we were all trying to get our schedules together to meet up – I think in the spring of last year – and that got thrown out of the window. All of us were in holding patterns about how the world was going to be in a month or two or three or four. I didn’t go further than a ten-mile radius from my home until about two weeks ago… So we all made wonderful progress at the studios we have available to us and it started gaining momentum again.”

Did the weirdness of the last 18 months make you more or less creative?

Chelsea: “I have to say that at first there was pressure to be creative, I think, and it really just wasn’t there for me. I had a cancelled tour in Europe that I had to fly home from without having even played a show. Then in early January I decided to get sober, which is right about the time that I really started digging into these Converge songs. I think for me that this new clarity of mind that I have has really been channeled into the songs. At the same time, working on these vocals and these songs with everyone was really helpful for me in getting my creativity back. I just felt really free within this project. We were all really open to each other’s ideas. It just became this really joyful experience. I think of it as being joy in the darkness. When we got together [over the summer] it really came to life.”

Could you talk about Stephen Brodsky’s contribution to the record?

Jacob: “Sure. I’ve known Stephen since we were teenagers. In my opinion, he’s been one of the most talented, natural players I’ve ever known. I guess what I mean by that is he has really sharpened his technical skills in such a way that it looks effortless, but it’s really from a million hours of bedroom shredding as a teenager. But he is absolutely incredible and I have always wanted to do more with Steve. He was actually in our band at an early stage, playing bass, while Cave In were on a hiatus way back in the late ‘90s, and I really enjoyed being in a band with him at that time. We went in different directions because he went on to do more Cave In stuff. But we’ve always remained fast friends, and he’s always remained really close with Ben Koller, Converge's drummer. He’s also Kurt’s old roommate, and he plays in bands with Nate. We’re connected in all these ways… But he brought such a powerful musical sensibility to the project. Some of his riffing and basic melodic ideas he comes up with are just so powerful. It really connects with me in a special way, both in this band and with everything else he does. I’m just a fan, so being able to work with him was really special.”

Chelsea, what, if anything, did you learn about yourself as an artist during the making of this album?

Chelsea: “I’m sure there’s a ton of things, but nothing’s coming to mind right now.”

Jacob: “I don’t know if it’s the same for you, Chelsea, but the pandemic put such a weird pause on creative folks. Everyone had a need to be creative, which I felt pretty stifled by. I don’t work like that. It took a while to get to a point where I even felt comfortable making something. So for me, Bloodmoon had a really cool support structure. We’re all peers who care about each other, and respect each other as artists, so even if we weren’t fully confident in doing something so big and elaborate, there’s so much comfort and support from the seven of us that it almost takes away that artistic doubt everyone has when they’re creating something. It made me feel that I had to be looser with my ideas. I just threw things out there rather than endlessly honing each idea. It fulfilled me in ways that a normal record wouldn’t have typically done.”

Jacob: “The logistics of taking it on the road are complex, but we did announce that we’ll be playing a Converge Bloodmoon show as part of Hellfest next year, so I think that’s the goal that we’re all working towards right now. I think we all hope that we can get other things together, but, again, it’s a lot of moving parts that we don’t control. So we’re just being as available and flexible as possible… So we’re getting there. We’re definitely getting there. We hope to do something for sure, but the world is still a dumpster fire.”

Bloodmoon: I is out now digitally via Epitaph. Vinyl releases will arrive on June 24, 2022 via Deathwish.