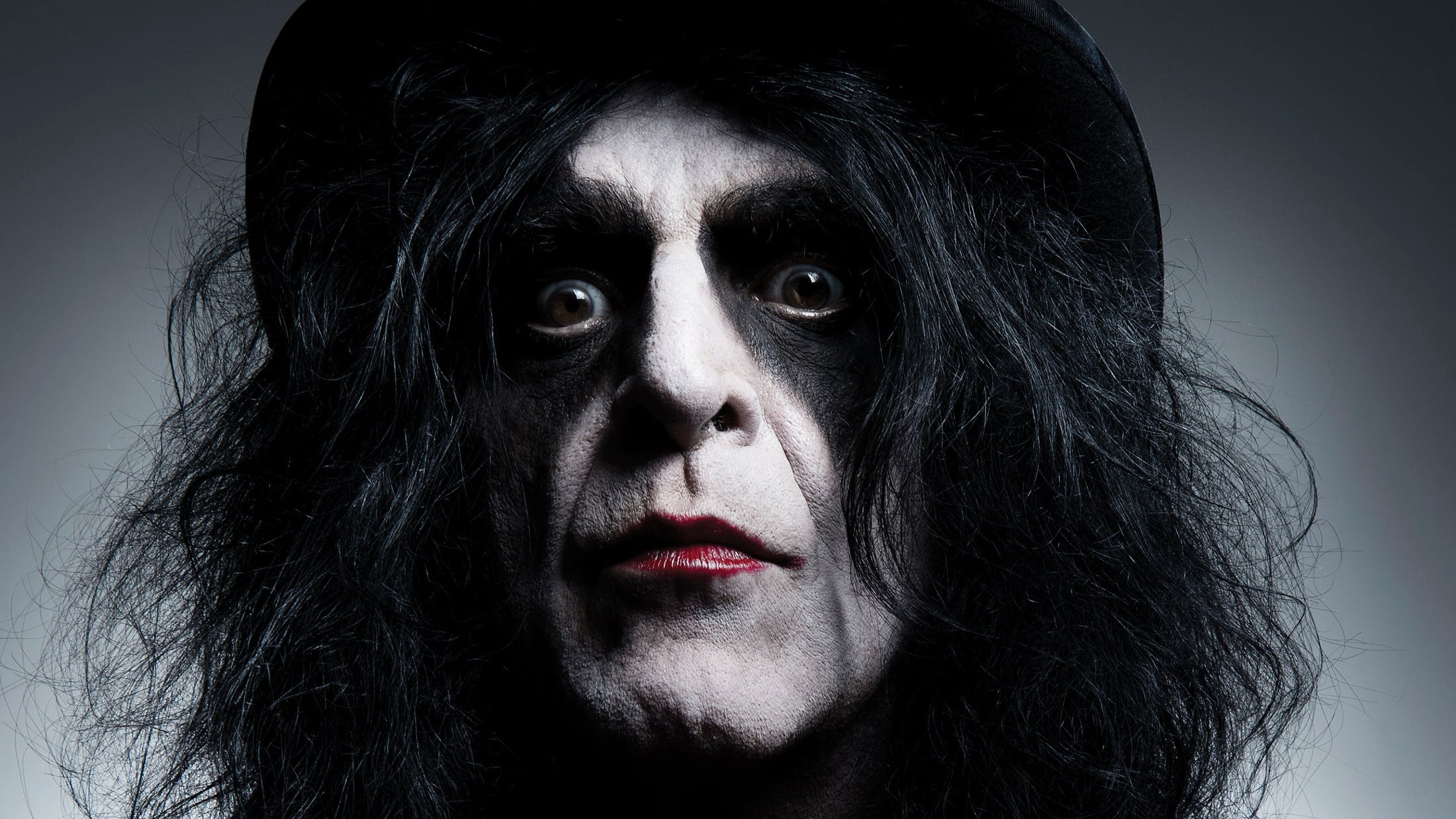 Without the benefit of a time machine it's difficult to convey the importance of Killing Joke's self-titled debut album, which turns 40 years old today. But imagine, if you will, no Ministry, no Nine Inch Nails, no Fear Factory, no Godflesh, and, by extension, none of the bands who were influenced by them. Yeah, it's that big a deal, a truly colossal record without which many of your favourite bands wouldn't exist. Put simply, there was nothing that sounded like Killing Joke.

“No, there was nothing like it,” agrees frontman Jaz Coleman. “I remember a very young Al Jourgensen coming to one of our gigs, dressed as a New Romantic. But the great thing about Killing Joke is the mirror effect, like, if those arseholes can do it then so can we! Ministry, like all the other bands, I consider to be our musical children.”

Jaz, it should be noted, is currently in Mexico, so we're talking to him via Skype, which is most unnerving when it freezes, leaving him mid-cackle, a manic laugh that would make him a natural for the next Joker movie. Except that Jaz is probably more crazy!

“My own family consider me crazy!” he grins. “The umbilical chord got caught around my neck when I was born, and there was a lack of oxygen to the brain. So all of this is born out of autism! (Laughs) I feel this sense of personal mission, like all the great psychopaths have!”

As such, when asking him about that magnificent debut album, you may have to look up some of the answers, because you have no idea what he's actualy talking about. He is also prone to going off on wild tangents. Fans of Killing Joke would expect nothing less.

We begin in a grey England, with Thatcher in power, one in ten of the population unemployed, and the ever-present threat of nuclear war.
“Most people don't realise the backdrop to 1980. 90 per cent of people 25 or younger thought we had two years left to live before there was nuclear conflagration. I can remember doing that album – and we were so high doing that album. We used to be given an ounce of hash and we'd smoke that, and then smoke the management's ounce. Big Paul [Ferguson, drums] beat up two of the management for not getting us weed! Any second we thought the walls were gonna cave in with the white heat of atomic explosion. Then you had cities like Berlin, which was unique in the late '70s and early '80s, because you had all these people who were trying to avoid conscription in West Germany, so the subculture was heaving.”

Indeed. Wasn't the song SO36 written about a club in West Berlin?
“It was a sector as well as a club. That song occurred because we all got really high and went into one of these beer houses. The only thing they had on the menu was these great big lumps of pork, and we were completely high. We saw all these blue-eyed people eating pork and we got the horrors!”

That was also a time when punk was very multi-dimensional, with a lot of different sounds and styles.
“You hit the nail on the head. Punk is essentially, 'I'll have a go at that!' No fear of failure! Everything is possible! And I have done the impossible, when you consider my criminal offences before the age of 16 and the fact that I've got no schooling, no exams, no nothing. I've got an IQ of 170! My mind is brilliant, and Killing Joke has been my further education. That album, you can see that we're an unusual band.”

Given that your first EP, Turn To Red, was so well-received and got a lot of airplay from John Peel, was there a weight of expectation when it came to making the album?
“I suppose so. There were also things like you had Time magazine talking about the new tribalism and they were referencing Killing Joke, so you could see that we were part of a bigger picture. My whole perception of rock music has been influenced by people I've met who were involved with the Tavistock Institute. Basically the whole rock revolution was manufactured by the Tavistock Institute in the first place. They financed the first Beatles tour of America, to study the behavioural patterns of young people. The whole goal was to break up the family unit. I've given my life to the liberating possibilities of rock music and experimental music, but I have to also be aware that it was created by the Frankfurt School Of Psychiatry. The whole thing has been manufactured from day one, but we've taken something that was potentially evil and we've transformed it into something beautiful. I know that our work in Killing Joke is a sacred and holy mission.

“But you have to see the first album in context... All those songs were written in 1979 but recorded in 1980, so it's kind of a 1979 album, and two things influenced us. One was the house in which we met; it was psychiatrists who worked at the Tavistock Institute, so we had a good lesson in what was to come, from what they told us. The other big influence was Brzezinski's book, Between Two Ages, which talks about the emergence of a technocratic state. These two influences affected day one of our recordings. The corporate takeover of the world was mapped out and planned by the CFI after the war. They could see the goal of world dominion, and now you're witnessing the final stages of it.

“On that first album, you can see our fears of the new technotronic fascist state, stuff like Tomorrow's World, which we still play because it has great validity. The fact that when you look at Eisenhower's last speech, he warned of the military industrial complex, and he wasn't fucking joking. The military industrial complex requires a state of permanent war in order to have growth, which is why we have to find innovative ways to combat these entities.”

The sleeve artwork taken from the picture by Don McCullin of rioters in Northern Ireland has become pretty iconic.
“That's right. The guy who did that picture only got paid the other year! (Laughs) When it came to revolution, the one thing we all agreed on was that Christianity, Judaism and Islam must go. Especially Christianity. But in America 52 per cent of the population believe in the rapture! And half the creepy-crawlies in the Pentagon believe that by bringing world war three closer, Jesus will turn up!”

It takes Jaz a good five minutes to stop laughing at this, after which he goes off on another tangent, this time about touring with Joy Division.
“Their dressing room was like a fucking morgue! Ours was always full of punks partying, so Hooky [Joy Division bassist, Peter Hook] always hung out with us. I probably shouldn't say this, but the Killing Division album is coming out in January. Well, you can't use the word 'division' because you'll be sued, but it's KD 93 or something like that. It sounds amazing! The combined forces of Joy Division and Killing Joke! It happened in the '90s and it's coming out!”

Is that a scoop? We think it probably is. But Jaz has moved on, suggesting that we meet up and take magic mushrooms. We steer him back to the album, in particular all the bands who've covered its songs, from Helmet and Mad Capsule Markets to Foo Fighters and Metallica.
“Well, that was after... At the time it came out, we were fucking slated. But we were horrible people at that time, much worse than we are now! We used to have spies on the editorial meetings of the music papers, so when they sent someone who didn't like us we'd have a nice little reception for them. That album was really badly received.”

Presumably you got some decent money from the Metallica cover, though?
“I didn't even know who Metallica was when they covered The Wait, but when I opened my first PRS cheque, I knew! (Laughs) I never lusted after superstardom. Whenever it's getting too successful, I fuck off.”

Which song are you most proud of?
“Well, I see it as one work. The thing with Killing Joke is when you start a record, any record, there's no preconceptions of what it's going to be. I never wanted to be a singer, because my vocals are so appalling, so on Wardance I put them through a fuzz pedal, just because I hate the sound of my own voice. That became a hallmark and all these bands would put vocals through fuzz boxes, just because I couldn't sing properly.

“Wardance is the most relevant, because we're at war with ourselves. We've been adapted from an already evolving primate, another race of sentient beings, and part of us is not from here. We don't like food in its natural state, because part of us is not from here. The true nature of this planet would shock everybody, hybridisation programmes of different star races over a great period of time. The reason the pyramids and these great places align to the constellations is they're telling us of the star races that altered our DNA.”

Aliens aside, the album does seem more relevant now than ever.
“We were always out of step with everything that was happening at the time because it was visions of what's to come, it's precognitive. Everything in Killing Joke comes from my nightmares. My mother was the one who noticed that I was precognitive, I saw things that then transpired. Killing Joke is now the most influential band in the world!”

Killing Joke are reissuing their debut album, Pandemonium, The Singles Collection: 1979-2012 and the 12" I Am The Virus single for their 40th anniversary. On sale December 11 via Spinefarm.

Jaz Coleman: "When Killing Joke Really Lock In, There's This Strange Energy Between Us All. And It Was Born In Magic"

Killing Joke frontman Jaz Coleman on reincarnation, the power of magic and his incredible legacy