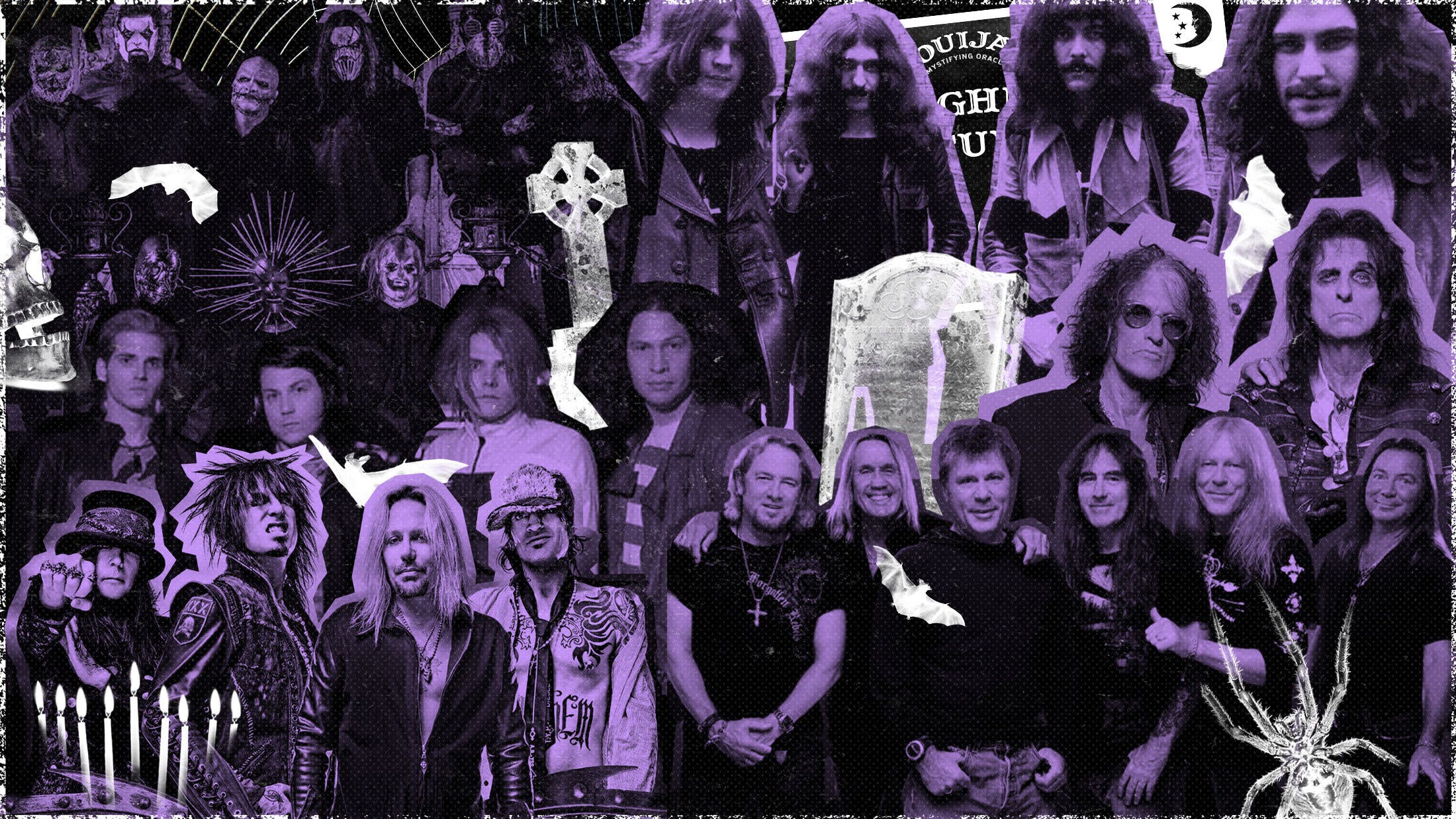 Rock music has always had a fascination with the spooky side. There are thousands of songs delving into the darkness, but what happens when the preternatural peers back? These are the 10 spookiest times that rock and metal stars have – allegedly – had a run-in with the supernatural…

After some weird happenings surrounding their eponymous debut album and a book on magic that Ozzy had nicked, Black Sabbath largely steered clear of the occult… until they decided to record fifth album Sabbath Bloody Sabbath in Clearwell Castle in Gloucestershire. They would rehearse in the dungeons for atmosphere, but were apparently not alone. “We rehearsed in the armoury there and one night I was walking down the corridor with Ozzy and we saw this figure in a black cloak,” guitarist Tony Iommi recalled. “We followed this figure back into the armoury and there was absolutely no-one there. Whoever it was had disappeared into thin air! The people that owned the castle knew all about this ghost and they said, 'Oh yes, that's the ghost of so-and-so. We were like, 'What!?'”

After meeting a physicist who believed in stargates and alien encounters, Killing Joke hatched the idea of recording 1994’s Pandemonium inside the Great Pyramid of Giza. A $2,000 ‘contribution’ to Egypt’s Ministry of Antiquities later and there they were. “The first thing that happened was our engineer fell asleep in the King’s Chamber,” frontman Jaz Coleman told Kerrang! more recently. “He suddenly had some nasty vision, sprang up, banged his head on the lintel and ran out screaming. After this he said he’d never go back in again. He said there were thousands of alien eyes staring at him. Then when we came out, there were about eight or nine hundred Bedouin tribal warriors outside the Great Pyramid. It was like a set from a movie. They had all these bonfires and they were chanting – it was just fucking wild.”

King Diamond Puts Metallica Up In A Haunted Apartment

When Metallica were recording Ride The Lightning in Copenhagen, they spent some time in Mercyful Fate frontman and noted Satanist King Diamond’s haunted apartment. “There was a girl there one time who freaked out because something locked her in the bathroom and she heard growling, then [former K! photographer] Ray Palmer experienced something similar,” he told us. “Another guy felt hands up and down his back, a girl felt her hair pulled. There were little kid-sized fingerprints appeared at the top of a mirror, bottles would turn up in the wrong places.” Spooky events seem to follow the singer. While making the King Diamond horror concept masterpiece Abigail, an unexplained guttural voice appeared on the song The Family Ghost, growling the words, ‘Oh damn.’ KD embraced it and routinely delivers the mysterious addition when performing the song live.

Iron Maiden Incur The Repair Bill Of The Beast

While the devil-worshipping accusations that dogged Iron Maiden – particularly in America – were preposterous, the making of breakthrough album The Number Of The Beast was beset by enough problems to make the band wonder if there were gremlins (or worse things) afoot. “We all loved to Hammer it up a bit,” admitted Bruce Dickinson on Classic Albums. He said there were a number of wind-ups going on, but that the “Martin Birch issue about the carload full of nuns is true”. Essentially, the producer collided with a van full of nuns and when he took his car in to be repaired, the bill came to £666. A rather devilish coincidence, we feel.

As the original shock rocker you’d expect Alice Cooper to have had a brush with the dark side, and it came when he was working on material with Aerosmith guitarist Joe Perry. “[We] were in this old house in upper New York,” he told us. “We were writing songs and all day things kept moving and disappearing. That night we were sitting for dinner and it sounded like people were moving furniture around in the basement. It wasn't like the movies where you go to investigate the noise – we got out of there. We found out later it was the place where the guy wrote The Amityville Horror.”

Mötley Crüe’s Shout At The Devil album suggested an adversarial stance towards the Horned One, but apparently it was originally going to be a chummier Shout With The Devil. This changed when A&R man Tom Zutaut – who originally signed the band – witnessed some strange goings on at Nikki Sixx’s pad. In Crüe autobiography The Dirt he recalled: “I swear to God I saw this with my own eyes, a knife and a fork rose off the table and stuck into the ceiling just above where I was sitting. I looked at Nikki and freaked out. There is no more, ‘Shout with the Devil.’ If you keep shouting with the devil, you’re going to get killed. You can believe what you want, but I truly believe that Nikki had unknowingly tapped into something evil, something more dangerous than he could control that was on the verge of seriously hurting him.”

The Mars Volta Fall Foul Of A Ouija Board

The Mars Volta guitarist Omar Rodríguez-López returned from a trip to Jerusalem with an archaic form of Ouija board, which he gave to vocalist Cedric Bixler-Zavala as a gift. According to the band, they contacted various spirits via the device – which they dubbed The Soothsayer. Foremost were three spirits combined into a single entity known as The Goliath. Their album The Bedlam In Goliath sprang from this experience and the messages they received, but things soon started going wrong. Omar’s home studio flooded, tracks would mysteriously disappear from hard drives, and Cedric wound up requiring surgery for a foot injury. Eventually Omar took the board and buried it, keeping the location secret from the rest of the band for their own good. “He buried it because he knows that I am obsessive compulsive and despite everything that was happening, I would probably want to play the game again,” Cedric admitted to Marquee Mag.

Slipknot Record In The ‘Houdini Mansion’

A number of bands claim to have had spooky encounters in the Los Angeles mansion formerly owned by Rick Rubin and often erroneously known as the Houdini mansion (although Errol Flynn did live there). The Red Hot Chili Peppers and System Of A Down experienced strange goings on, as did Slipknot when they took up residence to record Vol. 3: (The Subliminal Verses). There was an area in the basement that Paul Gray found himself physically unable to enter and Joey Jordison’s door would swing open at 9am every morning, no matter how he tried to jam it closed. In his book A Funny Thing Happened On The Way To Heaven, Corey Taylor also recalled being in his bathroom when, “A man in a tuxedo walked past the open door, staring right at me.”

My Chemical Romance Stay In Another Haunted House

My Chemical Romance also had a brief stay in a reputedly haunted Los Angeles house known as the Paramour Mansion while working on what would become The Black Parade. Mikey Way was already struggling with various mental health issues, but the oppressive atmosphere of the mansion didn’t help and he ended up leaving after suffering what he later called “a series of breakdowns”. Drummer Bob Bryar told Alternative Press that “the Paramour was fucking creepy”. He said that he repeatedly found water around the edges of the clawfoot bathtub that he never used. “I remember walking into [Ray] Toro's room one day and seeing him visibly shaken with a toothbrush in his mouth,” he added. “I asked him what was wrong and he said he was 100 per cent positive he saw a lady in a white dress walk down the hallway.”

Appearing on Celebrity Ghost Stories, Marilyn Manson recalled being taken by a bully when he was 15 and shown a “makeshift Satanic altar [with] dead pigeons and dead rabbits… and their rotting carcasses hanging and blood everywhere and blood soaked into the hay”. The bully and his brother made the young Brian Warner read incantations from a Lovecraft-inspired Necronomicon. “I could hear talking and it was very scary. There was people talking, whispering that I heard, it was along the lines of lines of, ‘Do you believe in Satan?’" he said. “This was very unnatural and it scared me; it made me feel like I created something by reading the book.” He fled in terror but returned in daylight… only to find no sign of the house or cellar. Mazza loves to fuck with people, of course, so it’s always best to take his stories with a pinch of salt. Or possibly sulphur in this case.