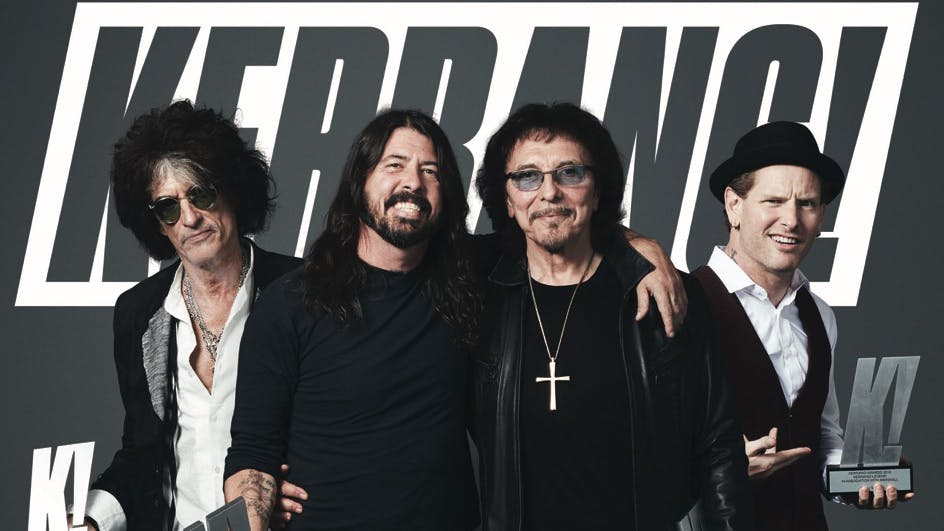 If that isn't enough K! Awards for you, there's also a stunning art print to help you remember the night, illustrated by Ernie Parada, whose work you can check out at Hellgateindustries.com.

Elsewhere in the issue, we review Panic! At The Disco's latest album, Pray For The Wicked, and - spoiler alert - Brendon Urie hasn't got any less fabulous. Plus, we go inside Bruce Dickinson's Bosnia gig with the touching documentary, Scream For Me Sarajevo.

We also spend the night with Pearl Jam at London's O2 (the first of two gigs, the latter of which was cancelled, so that was lucky...) and get sweaty with Enter Shikari at a teeny, tiny basement show in honour of the Kerrang! Awards. Oh, and Stone Sour rock the Roundhouse, also in London. You wouldn't expect anything less...

With Mark Tremonti heading over to the UK for a solo tour, he discusses the concept behind his recent A Dying Machine record, and we Get In The Van with State Champs (which is a far more pleasant experience than you'd expect).

Plus, Bleeding Through's Brandan Schieppati gets on his soapbox to explain why we need to embrace music's flaws, we relay everything we know about the new Deaf Havana record, pop into the studio with Deafheaven, get Black Foxxes dude Mark Holley to pick the songs that made him the man he is today, and Joey Jordison tells us some things No-One Knows about him.

Oh, and we've also got one amazing poster featuring every single winner from the Awards.

The new issue of Kerrang! is available anywhere in the world when you order online through Newsstand. But for UK residents, it hits the shops on Wednesday, June 27 from all good newsagents.