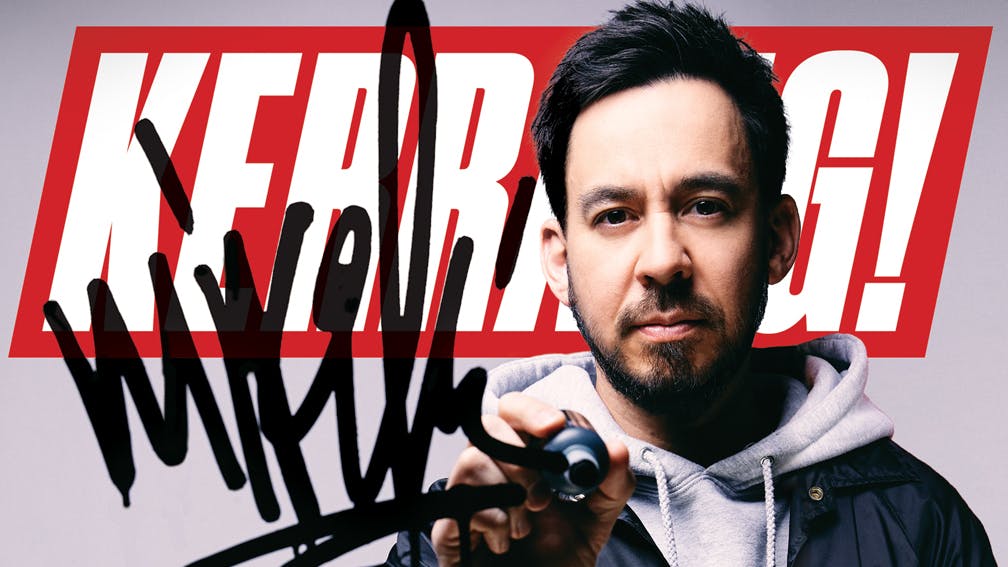 Eighteen years ago, Kerrang! sponsored Linkin Park’s inaugural UK show. This Sunday we do the same for Mike Shinoda, as this week’s guest editor plays London’s Roundhouse as a solo artist for his debut UK headline performance. Looking back, there’s a sense of history repeating itself. Entering the final straight of the Post Traumatic era only with eyes ahead, however, he explains the future is very much unwritten…

Plus, as well as taking over this week’s mag, we couldn’t possibly have anyone other than Mike Shinoda himself ink you this week’s exclusive art print, could we?

Elsewhere, Deftones legend Chino Moreno goes under the K! Interview microscope, Slipknot take us inside album number six, Nothing But Thieves' Conor Mason lifts the lid on his life in music (with added Britney Spears), grandson tells us some secrets, and we examine the enduring ripple of The Downward Spiral's – and Nine Inch Nails' – cultural impact, 25 years on…

In the reviews section, meanwhile, Venom Prison prove death metal isn't all dead from the neck up on their righteous, furious second album, and Brit metallers The Raven Age step up on their new record. On the live front, twenty one pilots kick off the UK leg of their Bandito Tour in phenomenal stye, Frank Carter makes a chaotic, furious live return, and Derby's rising gods of glam, The Struts, get groovy in Glasgow.

All this and more is available in the new issue of Kerrang! – which you can get anywhere in the world when you order online through Newsstand. But for UK residents, it hits the shops on Wednesday, March 6 from all good newsagents.