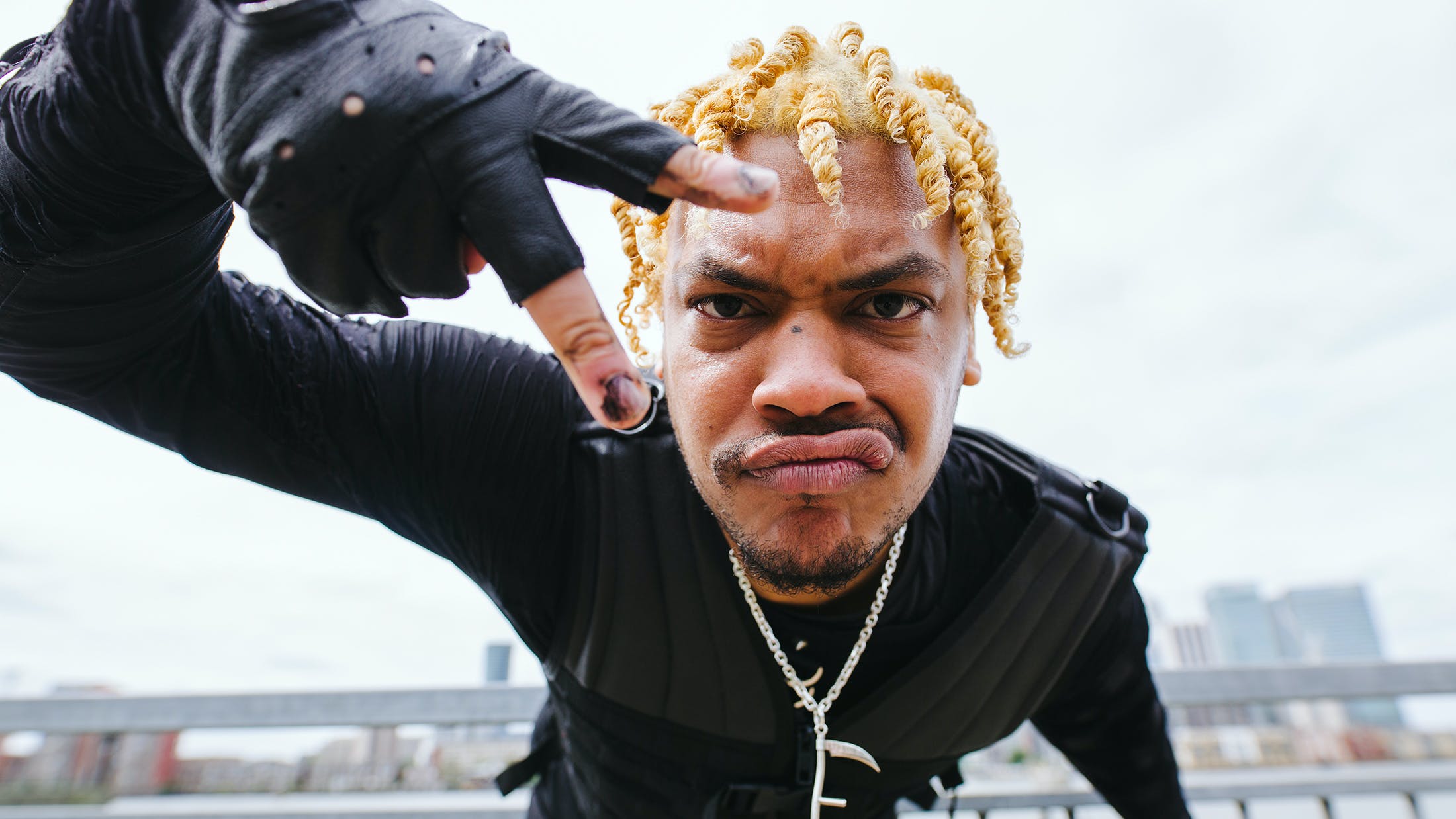 Growing up on a steady diet of grunge, hip-hop and nu-metal influenced a young Tyrone Hill to make music without boundaries and to push his music into unexpected territories. Here, the artist and Slipknot superfan known as Kid Bookie reflects on the songs that inspire him the most, and why he wants the most debauched funeral of all time.

The first song I remember hearing…Nirvana – In Bloom (1992)

“My dad is a white dude that was raised in a very white area, but he was one of those very ‘fight the power’ rappers. He had a record collection of rock and rap – and so much LL Cool J. But he had Nirvana vinyl, very early first-pressings of Smells Like Teen Spirit, which came with In Bloom and the sound of those obnoxiously loud guitars just stuck in my head. It was such a poignant moment hearing that because it’s always steered me toward distorted guitars. There’s no reason for distorted guitars to sound so sexy. It completely rattled me and from that day on Nirvana was a muse.”

“I would have been in Year 7, so I just came out of primary school like I don’t need to worry about who I am, what I dress like, what I do, because I have no idea what being put with a whole new group of people is going to do with me yet. I remember this dude James Johnson was like, ‘I’m going to a Busted concert.’ I hadn't even been to one yet and I’m like, ‘What?! Your mum’s letting you do that?’ They’re so early pop-punk, but they wouldn’t have been given the moniker at the time because it was new in Britain. There was no pop-punk band yet, McFly was the staple for it, but Busted just got ‘pop music’. It was in the Top 40 and shit and it would be played after Shakira. It really reminds me of school and a time where I didn’t care about who I had to impress, what bravado I had to have, I was just free.”

“It was on an ECW compilation thing that I downloaded from Kazaa. When it came on it started with Mick Foley doing something to somebody on a bed of nails, as it goes ‘I felt the hate rise up in me…’ I was like, ‘What the fuck is this?!’ It’s so pungent. It’s like a bad smell but you’re trying to understand why. Corey’s voice was stupid back then. That was the shit.”

“This would have been in 2004 at the Brixton Academy when I was 13. Either Benji [Madden, guitarist] or Billy [Martin, guitarist] told me that a young, non-famous Adele was at the same show. My dad was with me because I had school the next day but I remember at the part where Kyle Gass goes ‘…treated you like a dog!’ and a bunch of 13 and 14-year-old kids just start jumping as one cerebral, frenetic being and I needed to be a part of that. I am compelled to be part of the movement. That was my first experience of jumping round and having someone bump into me.”

“I will belt it out – it is part of my genetic make-up when it comes on. There’s something about the melody and the descending notes and the harmony, the chaotic solo at the end, it’s a beautiful piece of music. Absolutely phenomenal.”

“It’s got all the elements of what I believe my set is. I do this 28 Days Later kind of intro, but we flip into some very fresh metal madness and Vermilion does that. It starts so ASMR then goes into this big stadium ‘She's the only one that makes me saaad!’ I listen to that, I get in my zone, and I don’t feel scared anymore. Vermilion resonates with my energy. I’m ready to leave it all on the line, we’re gonna bleed, we’re gonna throw up, we’re gonna do what we gotta do. Let’s fucking do it.”

The song that makes me cry…Christina Aguilera – Hurt (2006)

“My sister put me on to so much music when I was younger, Christina Aguilera especially, and it’s not just that I think of my sister but I think of so much stuff around that time. When I first heard the song I didn’t really understand the pains that I was going through as a child, what I was experiencing and blah blah blah. But I know that every time I hear that song – whether it’s the violins or the delivery of her vocals – it’s such a powerhouse that there’s no way I can get through it without shedding. I get a similar feeling from Today by Smashing Pumpkins.”

“The worst songs of all time came out when Simon Cowell produced the gloss era. Pop music became too perfect. I don’t mean the talent – Leona Lewis is amazing – but pop became too clean, it lost feel, and it destroyed music for a little bit. Even though One Direction had good songs they’re a terrible product of perfection. All of you fuckers that came out from the Simon Cowell era, you nearly killed shit. You made rock music go into a hole, we didn’t want to be perfect and we enjoyed the fact that our fucking hearts were on the line and it’s about feeling – not trying to get Melodyne to make me perfect. The worst song of all time is anything Simon Cowell would fucking sign or produce and put out there.”

“That’s the Alton Towers theme song. It’s the most chaotic piece of music – what was he doing?! Even the pace of the song is just crazy, absolutely bonkers. It builds up so nice, then the toms come in and it starts speeding. This guy was fucking with tempo changes even back then and it’s just craziness harnessed. There were no MP3s back then, it was just a bunch of dudes in there going, ‘We’re going to fucking smash this song up today.’ I wish I was part of the creation of that song.”

“One of them is Radiohead’s Creep. There’s a part of the set where we’ve hyped everything up, everyone’s singing back to us, then we hit ’em with Creep. I connect with the idea of that song – not in the idea of following a woman who doesn’t like me or love or want to notice me, but being an entity and human being and revelling in the human space. It’s about the freaks, the degenerates, the people that have more to sell you than living up to the status quo that you’re just doing to impress a friend’s friend. So it's Creep or a song called Scars from my new album, which is a sister song to In The Dark. If In The Dark is about insecurities, Scars is about the scars you see from either hurting yourself physically or mentally, it’s not out yet but I like performing it because it’s such a massive ballad. And I like the reaction I get from people who are vulnerable and are expressing themselves to the lyrics I’m giving.”

The song I want played at my funeral…Panic! At The Disco – I Write Sins Not Tragedies (2005)

“I want to be lowered in to ‘What a shame the poor groom’s bride is a whore’ and just before the ‘I chimed in with…’ everyone will rip off their clothes, it’s all colourful and everyone just celebrates my death. They’re ashin’ their zoots on my coffin and I don’t give a fuck, it’s just wood. It’s going to get covered in dirt, don’t keep it clean. Some dude’s pissing on my shit, and I don’t care. Whatever they’ve gotta do. If you’re crying it’s only because you’re not getting involved in the party. I want to be dressed in the outfit that he had with the top hat and cane. Brendon Urie's not even an influence on me, but that moment is ingrained on my cerebellum. Bury me with all that blasphemy and profanity, my mortal realm is done, I’m no longer a physical being. Fuck it. The only thing I don’t want is necrophilia.”

Slipknot’s Corey Taylor joins forces with Kid Bookie for a song created “for you to scream ‘go fuck yourself’ to the face of all gatekeepers”.