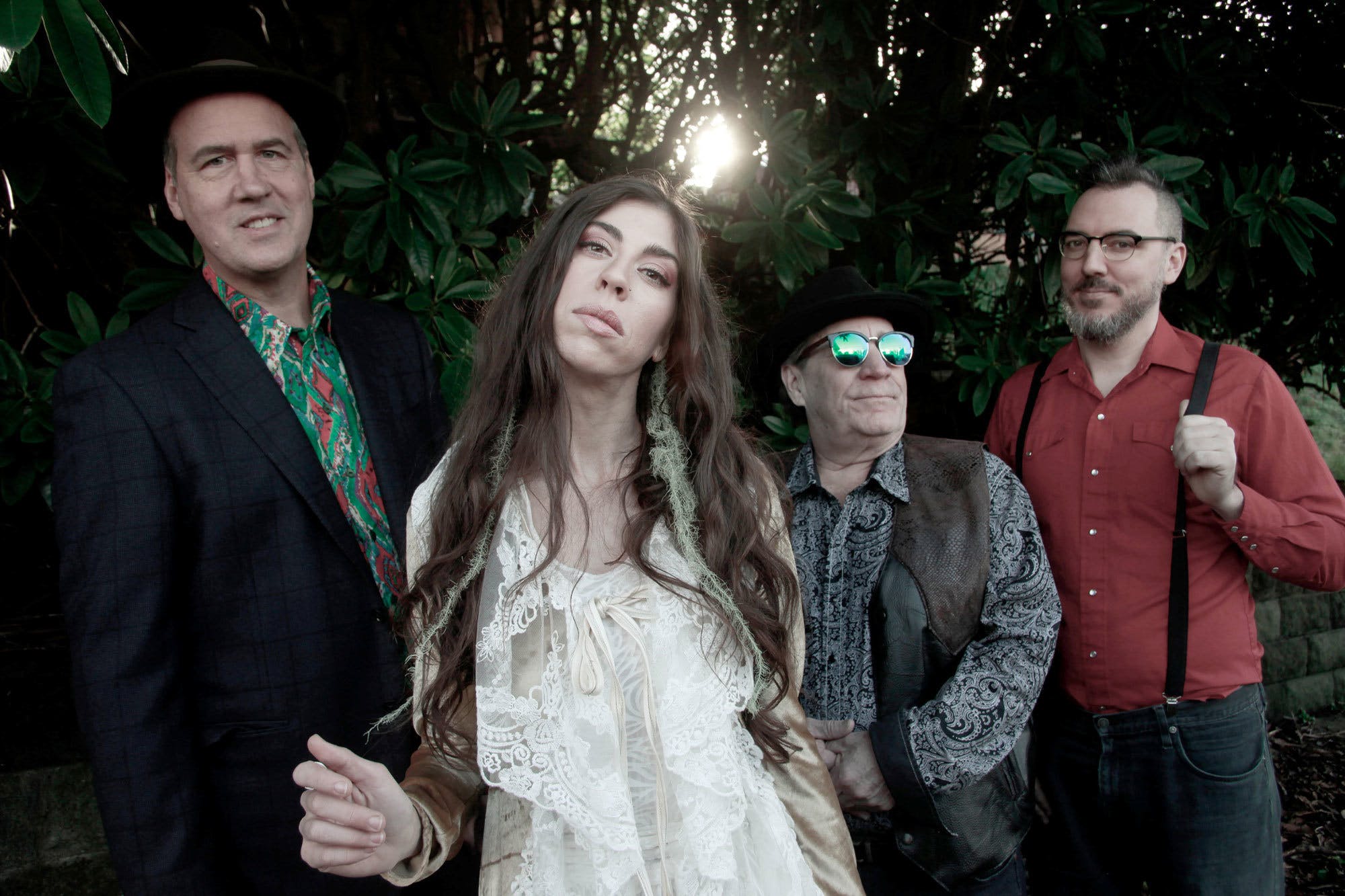 “It’s a lovely day here in Deep River,” says Krist Novoselic speaking to Kerrang! from his home in Wahkiakum County. It’s 4:30pm in London and 8:30am in Washington State, but Krist is a notorious early riser who enjoys his life on the farm.

Indeed, the name of 53 year-old bass player’s current band Giants In The Trees reflects the rural environment that all four members inhabit – the quartet of Krist, singer Jillian Raye, guitarist Ray Prestegard and drummer Erik Friend having met at a jam session where they were trying to raise money for a local grange hall they were trying to and keep open. That chance meeting led to an ongoing alliance that spawned the band’s self-financed, self-titled and self-released debut back in the summer of 2017.

Their debut was an effort that mixed ’70s-styled rock with a definite folk influence, topped by bursts of accordion playing courtesy of Krist himself. The latter’s unabashed love for that most unwieldy of instruments is rooted in his Croatian background and his love of turbo-folk. Indeed, Nirvana’s more observant fans will recall he in fact played accordion on the band’s landmark Unplugged appearance in November 1993.

Despite the eccentricity associated with Krist and, indeed, the accordion, Giants In The Trees are not a band who make arcane or obscure music. While it hard to place their textured sound, they will admit to drawing on influences as diverse as ’60s psychedelic outfits like Jefferson Airplane right the way through to the pop smarts of Madonna at her most accessible. In fact, Krist’s former Nirvana bandmate Dave Grohl described them as “a cross between Stevie Nicks and Black Flag” when he watched the band play Cal Jam – the festival he curated last October.

Dave Grohl himself got up and played with Giants at that show, prior to Krist and him, along with Pat Smear, closing the entire event by playing a set of Nirvana tunes with a number of special guest, Joan Jett and John McCauley from Deer Tick among them. While Krist remains fiercely proud of his time in Nirvana, that brief reunion was covered in full in issue 1744 of Kerrang! magazine and today we are not here to rake over the past. The subject of where Krist’s head is at right now seems more interesting, most specifically in the light of Giants In The Trees’ new album which is simply titled Volume II and which the band have once again self released.

That said, Cal Jam marked the first time that Giants moved away from playing local community shows as they stepped on to a wider stage, so that show seems as good a place as any to start our conversation…

How did playing Cal Jam affect the band and the music you make?
"I think for the band it was an experience on how to play a big show. There was also the experience of waiting around on a show like that, waiting to play, and seeing a lot of other bands too. Up until now we’ve been doing shows that are really selective. I mean, it’s not like we’re doing the club scene or anything like that. It’s small festivals that are local to us and that we’re used to."

"We’d started the record before we played Cal Jam so it didn’t really affect the record but it was a big show for all of us and we took it pretty seriously. It’s always great to see the Foo Fighters and I guess the band got a dose of rock stardom at that show as whole."

Dave guested with Giants In The Trees on one of your new songs, Star Machine. What’s that song about?
"It’s Jillian’s lyric but it actually comes from a time when we were playing at this grange hall. There was a back room where they’d left a lot of props or carnival material. They had this great sign that said ‘star machine’. Jillian saw and said ‘We’ve got to have a song call Star Machine.’ We started busting out a riff, and that song just came out. It’s kind of funky, really."

The last time we spoke you described the new material you were writing as “pretty groovy and pretty heavy”. Now the album is finished, do you stand by that?
"I think so. It’s heavier than the first record. It’s more bass driven. There’s these grooves on there, especially on the second song [It Goes] through to the fifth song [Sons And Daughters], so, yeah, it’s pretty groovy. Then after that, we go back to material that’s a little bit more like the first record. The final track, Nevermore, is where we get pretty whimsical but really we just wanted to groove more on this record. That was kinda the aim."

When you wrote and recorded the first album, you were getting to know each other as musicians. This time around you’ve played shows and you’re a proper band. Was the songwriting process different and more collaborative?
"Yeah. On the first album we salvaged a bunch of songs from different projects we’d all been involved with. This time there was less of that, although with Nevermore that was a song that Ray had done and we got hold of it, Giant-ised it, and then poured the whimsy syrup on it. This Is Love is also a song that Jillian already had ahead of things, but all the other songs was us making a noise together.

"On a song like Bright Side, Ray basically had this riff that went from C to A, I had a bouncy bass line and everybody just jumped on board. There’s a cacophony of noise on that track and then the bass riff busts in. Jillian’s phrasing is great on that song."

In terms of her use of melody and phrasing Jillian has really come into her own on this record.
"She has. Sons And Daughters was a sort of folk song that she had. We played through it and I felt I had to add some accordion on there and schmaltz it up. So I did! It’s like a weird attempt at modern country music. But that’s kind of our approach: we try and affect whatever the song needs. On a song like It Goes, that came together really fast because Erik has this disco beat. That song is actually a total disco song."

Is it really, though?
"Yeah. In my mind it is. It may not be what most bands would do but we liked the way it sounded and we looked round and went 'OK, let’s go disco with this!' We just go with the music and that’s what makes what we do fun. In fact, this time around there’s only three songs with accordion on them."

Volume II is possibly poppier than the first album…
"Maybe it is. The first record has that ’60s and ’70s rock-pop vibe that I’ve always loved, and that we all loved in Nirvana. Weight Of The World has some of that on this record too but I guess the sound has maybe changed a bit."

It feels like a happy record and there’s a certain exuberance in the music.
"Oh, thanks! I just think that everybody in the United States is too stressed out when we really don’t have to be. I know that there are terrible things happening in the world. I’m very aware of that but it’s preposterous how stressed out people get about things. I’m sorry we’re not stressed out and I am aware that that’s a total luxury too but I don’t think it’s great to be constantly offended by the world."

So, after all this time, do you still view music as escapism?
"Absolutely. Music can be whatever you want it to be. It can be political if you want it to be or you can choose to just listen to one type of music like death metal or whatever and just get lost in that too. That’s fine too. It’s your choice and that’s how it should be. I think it’s amazing that people still go to shows and look for that sense of communion after all this time."

The new album hit streaming services the day before the anniversary of Kurt’s passing. Was that a way of saying life goes on?
"No. We didn’t get things done quite in the right time, so that’s what happened. I know that my past helps the band and I accept that, but that was just how things turned out. All four of us have our own pasts and we’re all okay with that. I guess it’s part of who we are.

"Collectively, we’re also getting ready to do shows but, again, we’re not doing lots of promotion and we’re picking the shows we do. We’ve got a show in a couple of weeks which is a fundraiser for a grange hall. There’s a show we’re doing in Tacoma that's free and is due to take place at the Elk’s Club up there, which is a historic venue that's reopened. Tacoma is architecturally a very satisfying town. Obviously it’s not as old as those grand European cities, but it’s well preserved. We’re also doing another show as part of a festival called Cowabunga in Long Beach where I believe they have a foodie element. People will get to rock out to us while enjoying a plate of gourmet food of some sort, although it may be on a plastic plate…"

The food element is perhaps a little bit challenging as far as your punk credentials are concerned…
"I know. But I’m also okay with that. There’s actually a club in Longview – which is one of the nearest big towns to where we are, kinda between Seattle and Portland – but when you look at the listings there it’s just loads of metal bands playing there who really look that they are probably never going to get anywhere. It kind of makes me sad but also relieved that we do things the way we do."

On the loose subject of anniversaries, Flipper – a band you loved and then ended up joining in 2006 – are celebrating their 40th anniversary this year. Is there any chance you’ll be joining them for that?
"I might when they venture up here. Maybe there’ll be a chance I can jump onstage with those guys because I love them. [The Jesus Lizard frontman] David Yow is doing those shows with them so that should be good. I speak to [Flipper drummer] Steve DePace quite a bit and the band seems in good shape so I’m happy about that and I’m looking forward to seeing them."

So what’s next for Giants In The Trees?
"We’re happy doing what we’re doing, and the way that we’re doing. I guess, as usual, we’ll see where it takes us."

Giants In The Trees Volume II is available on all streaming platforms now. You can buy physical copies signed by all four members of the band and in special hand made packaging exclusively from their official store.

Bring Me The Horizon's Oli Sykes, Lamb Of God's Randy Blythe and more explain the enduring power and appeal of record stores…