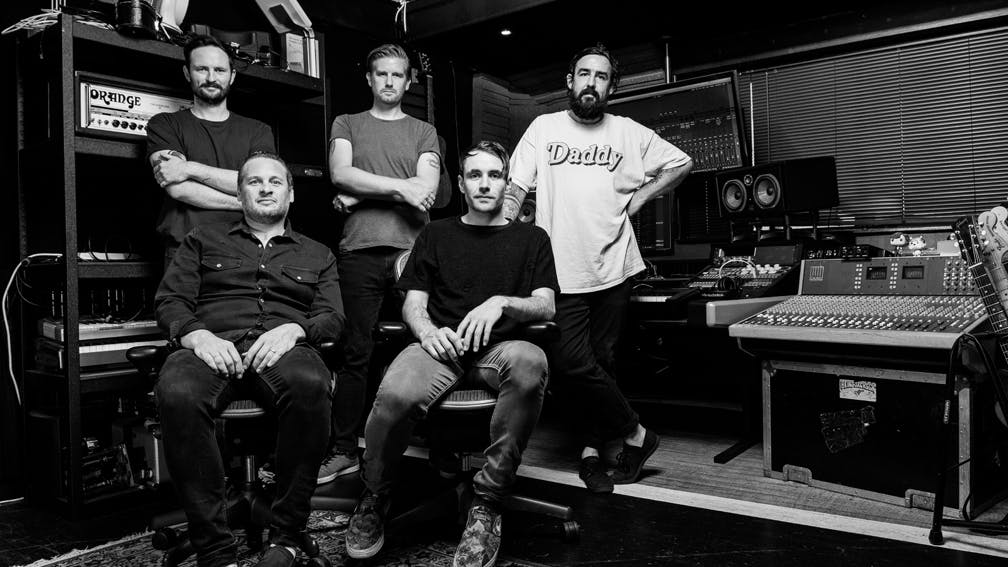 After five months of speculation about Lonely The Brave's future, yesterday the band revealed the exciting news that they've found a new recruit in place of former LTB frontman David Jakes, who left in March due to ongoing mental health issues.

If you've picked up this week's issue of Kerrang!, you'll have seen new frontman Jack Bennett – aka Grumble Bee – and guitarist Mark Trotter discussing the band's next chapter, including the fact that they'll be playing their first headline show under their new line-up this October, at London's Omeara.

Now, Jack and Mark talk us through their journey over the past few months, and what we've got to look forward to in the future…

How are you all feeling about people's reactions to Jack joining?

Mark: “We’re very excited! I don’t know if we’re nervous about people’s reactions, but it’s just different. We were the same band for 10-plus years, so it’s a big change for all of us. So it’s nerves in a good way, rather than worrying about it. Change is a good thing!”

What was the process like in trying to find a new frontman?

Mark: "Well, Dave obviously told us what his plans and thoughts were, and we were like, 'Okay… what do we do?!' Basically we thought about singers that we like, singers that we know, and singers that we've worked with. Jack had played some shows with us previously, so we knew him anyway, and, to me, he was quite an obvious suggestion. And luckily enough, he was up for it!"

Jack: “I was a huge fan of Lonely The Brave before joining – I’ve listened to them from all the way back to their first EP. I had played a couple of acoustic gigs with the guys, and then Mark got in touch with me a few months back. The guys were really into my voice, and just said, ‘Would you be up for seeing what we could do together? We don’t know what it might be yet…’ So we had a practice – and it was so weird having my voice coming out of their music! After a few practices they were like, ‘That’s it, you’re definitely involved!’ It’s a really hard vocal range – it was very challenging, and I was like, ‘There’s no way I can sing it.’ But I’ve been practicing, and I can hit these notes! It sounds completely different, and my voice actually goes a bit grittier when hitting those notes, so it almost sounds like a heavier version of the same band. It’s obviously not like black metal or anything (laughs) – but it adds a different element to the band.”

After Dave left, was there ever a point where you thought about splitting up?

Mark: “We always wanted to carry on – no-one ever thought, ‘Well that’s it.’ That wasn't ever the intention. It's been, 'Let's carry on,' because we all wanna do it, and I think we've all earned that chance, really! We’ve got to keep going with this – it’s all that we know, and all that we love. To call it quits would have been silly, really.”

Is it strange having bandmates now, Jack?

Jack: “It’s really weird! For me, it’s nice to see them really happy about it, and really nice to add to what they’re doing. They were in this weird limbo situation where they’re all really amazing musicians, and keen to write new music, but because of the situation they weren’t really able to play gigs.”

What does this mean for your Grumble Bee project – will you be putting that on hold?

Jack: "No! I've actually gone the other way – I've written an album for my Grumble Bee stuff, and I'm also writing an album with Lonely The Brave, and I'm also doing some poppy stuff! I took, like, a year to build my own studio, and I love it – I'm in it every single day. I'm writing more stuff, because I don't like the idea of having something fall behind. I'm basically competing with myself now, which is a good incentive to crack on. I think, for the rest of the year, I'm going to finish the Grumble Bee album, and then write some more tracks with Lonely The Brave. There's no excuse: if you've got the ability and the opportunity to do it, then you might as well just crack on. I definitely want to be looking at releasing two albums next year."

Has the dynamic of the band changed now?

Mark: “Well, we’ve got our first show booked in October, so we’ll see what happens there! It’s going to be different with Jack – they’re very different characters. There’s no doubt that there will be some differences, but I think that’s a positive thing, and I hope that our fanbase will support us – and they already have. We’re so lucky that people care enough to message us and say, ‘We’ll support you 100 per cent.’ So that’s incredible.”

Jack: “We’ve only practiced in a room like four times! I think, for the rest of the guys, they’re really happy about being able to play shows again. And we’ve been writing songs – my aim has been like, ‘Well, I want to write a song that’s better than Backroads!’ That’s what I want to do. It basically relies on the vocal melody to be so strong that can compete with that. We’re looking at demoing some stuff in my studio, and then seeing where we go from there. I think the aim is to have a single out by our show in October. At the minute, we’re going to have at least one or two new songs for then, that no-one will have ever heard, and they can judge how they think the band sounds now on that. Subconsciously people are always going to compare us, but that’s why I want us to have new music out for then, so people can hear it live. We’re writing, and definitely looking at putting out an album, and there will 100 per cent be new music out for the end of the year. We’ve written something, and what I can say is that I’m basically pushing my vocals to the point where it’s almost distorting – it’s so high! I’m trying to sing something that’s so catchy, but also retains Lonely The Brave’s open vocals, with these chunky guitars and the driven riff. I don’t really feel pressure – which I maybe should!”

How does it feel to be closing this part of Lonely The Brave’s chapter, and starting the next era?

Mark: “Everyone moves on, and everything has happened for the right reasons. We were all supportive of each other, and there’s no ‘hidden’ story, and to some extent everyone in the band goes through something. We just had to try and move forward as best as we could, and I think, realistically, what’s happened is best for everyone, really. We’re mates more than anything, at the end of the day. Everyone has their own baggage to carry, and certainly Dave had his. We’re probably not all the easiest to deal with at times! But we’ve known each other for so long, but it’s hard to describe. Health is far more important, and I’ve got nothing negative to say about Dave – I would support him in everything he did. We’ve had some amazing times with him – and hopefully we’ll have some more amazing times with the band that we are now.”

Does it feel like you’re a new band now?

Mark: “Not really! It’s a continuation. It sounds really cheesy, but it’s the songs that are important, and I don’t think it’s a case of one person, or any number of people, ‘carrying’ what we do, and the music we make. I’d like to think that if anything ever happened with any of us, and if everyone else still wanted to do it, then that’s great. Jack is the perfect person for us, because he’s absolutely lovely, and he’s got an incredible voice, and he’s super-talented and committed. With no disrespect to anyone, we don’t want Dave 'mark two' – we wanted someone to bring something new to the equation! So Jack’s perfect, in that respect.”

Jack: “Dave’s a different singer, so the way that I approached it straight away was, ‘Even if I’m the biggest singer in the entire world, it doesn’t matter, because there’s always going to be someone complaining that I’m not Dave.’ There’s always going to be someone who’s not on board, because they haven’t moved on from that era, so I was just trying to come in and do the songs justice. It means so much more to the people listening to them, so that was important to me. Hopefully people like it!”

And is new music on the way?

Mark: "It's all a work-in-progress. The ideas are flowing, and we never stopped writing. It's not like we had a year off and just sat around going, 'What do we do?' We're all musicians, so we've just been playing and writing, playing and writing. And some of those things will probably end up being on our next record. In terms of writing dynamics and how it works, it's very similar to how it used to be, so far. But we're just going to see how it goes – we don't have any rules. So whatever works, and is the path of least resistance (laughs), is how it will go."

Will there be a new single ready for your headline show in October?

Mark: "Yeah, I should think so. That show, really, is more about showing that we're still here! And it's also just a chance to get up there and say thank you to everyone who has supported us – that's the idea of it. As I said, we're so lucky that people care. We're all just super-excited, and I can't really remember it ever being this positive before!"

Catch Lonely The Brave at London's Omeara on October 13 – tickets will be available right here.