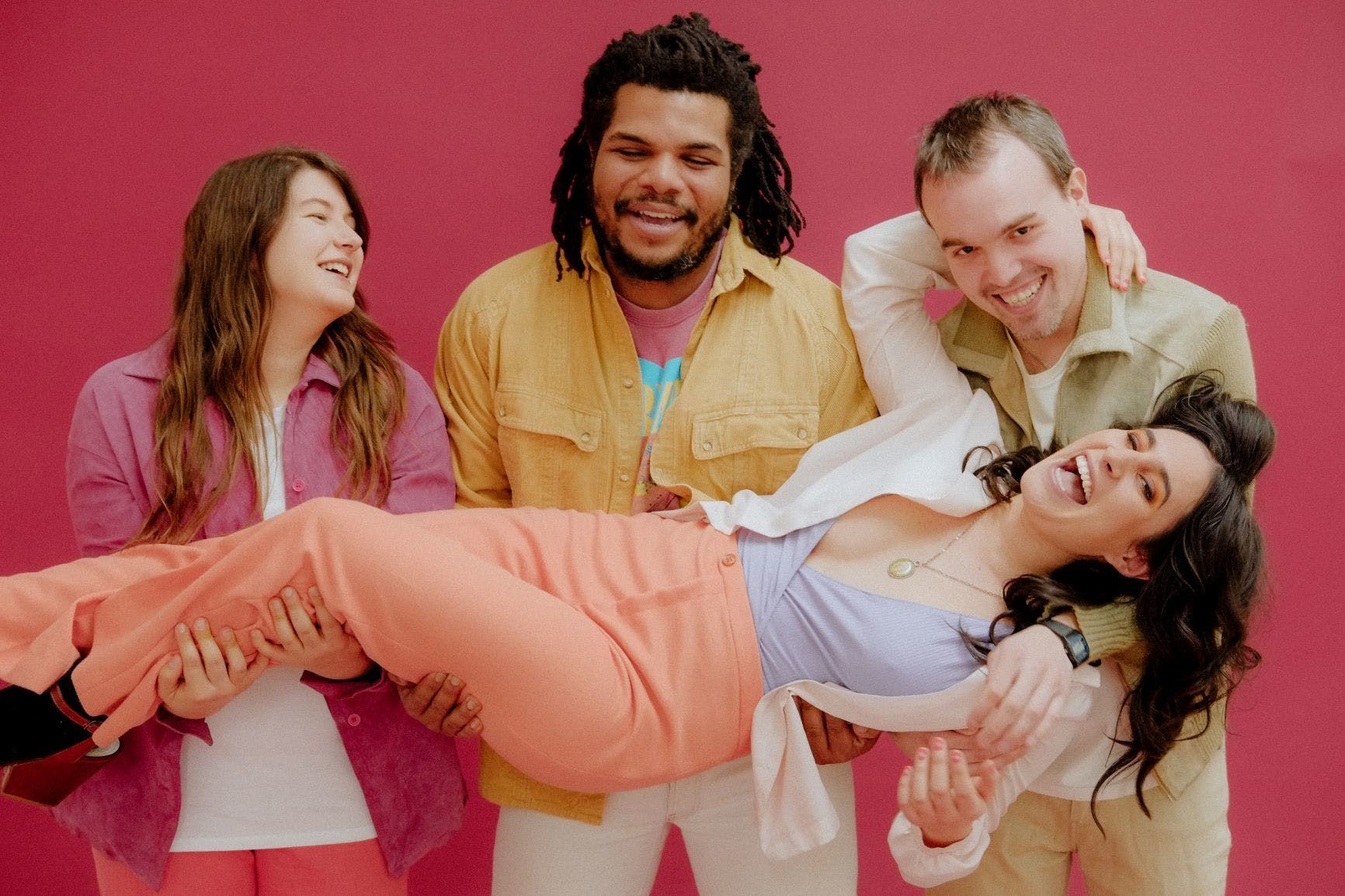 Marisa Dabice is tired of waiting. The Mannequin Pussy frontwoman uses the word over ten times during her phone call with Kerrang!, often in rapid succession for dramatic emphasis (“waiting and waiting and waiting,” she says). But the singer/songwriter/guitarist of her Philly band has good reason to be tapping her foot. Caught up in a tangle of label legalities, Mannequin Pussy’s long-awaited third album, Patience, was delayed a year longer than they would’ve liked. The record was already written as a rumination on the 31-year-old Marisa's tumultuous twenties, and many of its lyrics were sculpted during the epiphanic clarity of her early 30s.

But the stressful and highly unpredictable situation the band found themselves in while moving from their former label (North Carolina indie tastemakers Tiny Engines) to the famed punk powerhouse Epitaph Records caused Marisa to completely rewrite some of the songs to include that experience. The unexpected irony is that Patience is still—for the most part, both musically and narratively—a shedding of the anxiety and agitation that defined Mannequin Pussy’s first two albums.

2014’s GP (short for Gypsy Pervert) is a mangle of tumbling-over-the-drumkit hardcore, low-budget shoegaze, and gunky power-pop. The production is rough and the tracklist is patchy, but Marisa's songwriting deftness is gleaming beneath the mucky mixes—serrated, but not yet sharpened. It’s a timestamp of Mannequin Pussy’s developing identity and a reflection of what the band was for Marisa back then: a newfound medium to work through emotions while simultaneously teaching herself how to play guitar.

Their follow-up, 2016’s Romantic, takes the base components of GP and pushes them to the extremes their urgent playstyle demands. Everything’s faster, meatier and louder. Pop cuts like Emotional High and Denial are hookier than anything on GP, but Marisa sounds like she’s physically trembling while singing the latter. The album’s speed is its premiere feature. The band, drunk on adrenaline and binging on distortion, and Marisa, bursting at the seams with the compulsion to yell what’s been haunting her, emulate a sports car gunning down a back alley while the breaks are cut. The hardcore burners just crash into the shoegaze thumpers, and the songs that follow are birthed from the wreckage, smoldering composites of the two styles. It sounds dangerous, impulsive, reactionary, primal, freeing, cathartic and totally restless.

In a stark juxtaposition, the first memorable line on their new album is literally the word “patience,” drawn out melodically during the record’s titular intro. The word became a mantra for Marisa and her bandmates during the record’s marathon creation.

“Because every time I would be, like, literally crying to someone about the situation I was in,” Marisa says, “They would always say, ‘You have to just have patience.’ And I was just so pissed off with hearing that word again and again and again. But I realized, ‘Yeah, I guess you’re right.’ So it kind of seemed like this perfect tongue-in-cheek album title.”

According to Marisa, Mannequin Pussy signed to Tiny Engines in 2014 via a handshake deal, but the label walked back on that right before they released Romantic, the album that would make Mannequin Pussy a band with a buzz surrounding them. Shortly after the record dropped, and the band had reluctantly signed a contract for a third album, Epitaph approached Mannequin Pussy to join their roster. Marisa says it took two years for the labels to negotiate a buyout, and in that state of helplessness the band continued to tour relentlessly.

With the future of their career up in the air (given the opportunities Epitaph could potentially provide them, but the buyout taking forever) they eventually decided to just record Patience with the budget Tiny Engines gave them, despite their aspirations for something grander.

“So we did that and then when we listened back to it we were like, ‘Fuck,’” Marisa says. “It just wasn’t what I wanted. It sounded too sonically similar to Romantic. I wanted to make a big-ass sounding rock record that felt clean -- but not too clean. Polished, but could fall apart at any moment.”

In this cinematically low point in the band’s storyline, they were approached by Pennsylvania producer/engineer Wil Tip (Code Orange, The Menzingers, Turnstile), who heard that they were yearning to re-record their album through Mannequin Pussy’s then-tourmates in Turnover (who’ve recorded with Yip for years). “Wil knew about this entire situation and said, ‘I don’t care how much you’re gonna be able to pay me, I just want to work on this record.’”

Yip ended up being the ideal producer for the band’s vision, resulting in a work that’s tighter and less chaotic than their other albums, but with plenty of room in the mix to accommodate their diversified sound. There’re the obligatory pop-punches (Patience, Who Are You, Cream) and a healthy dose of push-pit fodder (Drunk I, Clams, F.U.C.A.W.). But the real gems arrive when Mannequin Pussy expand beyond what they’ve already done so well in the past.

High Horse is a tear-jerkingly straightforward ballad about an abusive ex. With no vocal effects, Marisa croons uncomfortably evocative lines like, “pushing me up against the kitchen sink,” over austere guitar strums, her voice ascending into a majestic belt as the song builds into a crashing proclamation of Marisa's independence. “Your world’s on fire, as I watch up from my high horse.” In a discography rife with striking emotion, it’s perhaps the most moving passage in any of their songs. Drunk II, another track about one of the three messy breakups Marisa endured and felt she could finally sing about, is its closest rival. Propped up by an infectious groove that gradually rocks harder and harder, Marisa sings about pretending that she’s fine when she’s most certainly not.

“I was out with friends, I was getting fucked up,” Marisa says, explaining the time in which she wrote it. “I almost went home with someone and I was like this is disgusting. I hate being around this, I hate having to pretend I’m doing fine. It was after last call and I came home and I was drunk, crying, and wrote this song that sounds like fuckin’ Lady Antebellum could’ve written it. It’s like kind of a country song. Drinking and heartbreak and all that shit.”

But by the end of the album (which, like all Mannequin Pussy records, is only about 20 minutes long), Marisa is singing “I know that oh this love / is starting again.” It closes on a vaguely disco-esque love song (titled In Love Again) that comes full circle in a way that Marisa admits was premeditated, but also reflective of her actual experiences.

“[I like] the idea of looking at a song as the potential to tell a story in three acts,” she says. “I think sometimes you can really do that with your records too. You have your first act that kind of lays the foundation. And then your second act is that darkest hour where it seems like nothing will ever go right again and you’re so desperately caught in your own self-destruction and in the memories of things that have happened to you. And then as our third act comes it’s like, ‘oh shit, I’m gonna be okay. I’m gonna get through this. I’m gonna be able to feel love again. I’m gonna be able to feel love for myself again, and for the people around me.’”

“And I kind of think that that’s been the actual cycle of my life throughout the last ten years,” she continues. “I find myself in that time where I think that all hope is lost and I’ll never feel happy again and I’ll never not be depressed, and then all of a sudden I start—it’s like you can’t really pinpoint the moment when you start believing in life again. I’ve been lucky that that does come back to me.”

In light of their upcoming album, the Philly four-piece have released a new single with an insane video.