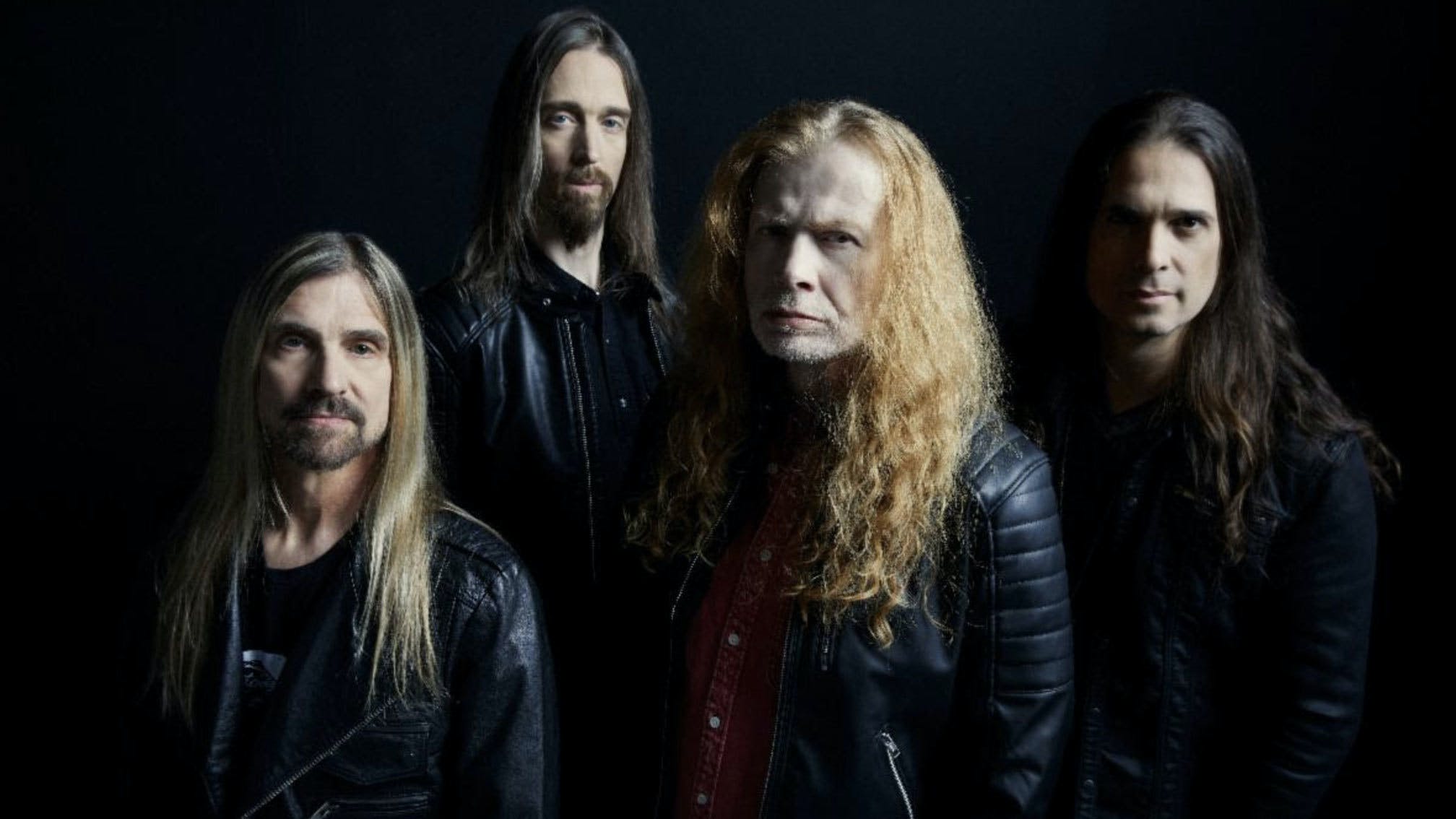 It’s been a wild ride for Dave Mustaine over the last six-and-a-bit years. In that gap between ripping 15th studio album Dystopia and brand-new 16th offering The Sick, The Dying… And The Dead! – the longest between-records break of his career – the legendary Megadeth frontman has survived a throat cancer scare and the global pandemic, he’s weathered the messy departure of founding bassist Dave Ellefson, and he’s aged (dis)gracefully into his 60s. Rather than pumping the brakes or allowing shades of grey to creep into his sound like so many peers, however, Big Dave seems hungrier than ever.

“Obviously that long break wasn’t intended,” he sighs, backstage tonight at Raleigh, NC’s Coastal Credit Union Music Park, joining us for a track-by-track breakdown. “I was probably more aware than anyone of quite how long it was. There’s been a lot of stuff going on, with the pandemic and me getting sick. But it’s like everything in life: if you keep fighting, you’ll get through!”

1The Sick, The Dying… And The Dead!

“Is this a reflection on everything that’s been going on with the pandemic? No. It’s got nothing to do with COVID or anything like that. Anyone who listens to the lyrics will see that it’s about The Black Death. When I sing about ships sailing west across the Black Sea, it means they were starting east of that, carrying this disease that was being spread by fleas and rats. The idea for the song actually originated from the nursery rhyme, Ring Around The Rosy, which is about the plague! I found the fact that you’ve got these little cherubs in nursery school singing songs about plague doctors and mass cremations hilarious!”

“Life In Hell is about someone who believes he’s this James Bond-like motherfucker who can live this life of espionage. He’s ultra-cool. No matter what, he thinks that he’s going to get out of it. He’s someone with a nihilistic – maybe fatalistic is a better word – outlook towards things. It’s about that self-obsessed, self-absorbed person, and how they eventually get caught. I like to have a moral, or a payoff, to my lyrics. I think the middle-eight here really does that: ‘Only a fool would do what you've done / You lie, you steal and you cheat everyone / When you're caught in your most despicable deed / You plead the court for diplomatic immunity…’ That could have been any of those people over the last four or five years who [were called out for] their terrible, predatory behaviour in Hollywood. Life In Hell is ultimately about that person who’s so into himself that nothing else matters to him, except him.”

“Night Stalkers actually started out as a song about the [serial killers] Midnight Rambler and Night Stalker. I hitch-hiked a lot when I was a kid, and going up the Pacific Coast Highway could be scary stuff when they had the Hillside Strangler out there. I thought it could be cool to have a song about that period, and how sketchy it could be for young people who were hitch-hiking up and down the freeway. But when I started looking into the Night Stalker, the crimes that he had committed were so heinous that I couldn’t write about them. There was no reason to give that guy any further [attention] so I abandoned the idea.

“Then, one day, a while after that, a friend of mine was telling me about this helicopter division that’s based in Kentucky, right above where we live in Franklin. When I found out about this special-ops division of helicopter pilots who go in under the cover of darkness to carry out their missions – whether that’s rescuing people or clearing out the bad guys – it was perfect. Ice-T is on the song, too. I’ve known Ice for forever, since back in the Rust In Peace days, and we’ve been friends for a little while – not as close as I’d like us to be, but good friends. Knowing that he was a Special Ops paratrooper made an impression on me and meant he was perfect for this song. That was pretty real!”

“Dogs Of Chernobyl is a metaphor for abandonment. The lyrics describe the meltdown at the reactor and the poisoning that happens after that, but for me it was really just another twisted love song. It’s springtime. Everything has stopped in the world. She can’t be found, but he still sees her face everywhere that he turns. It progresses from the first chorus where he’s seeing her face to a double-chorus where he’s in Chernobyl and feeling the effects of radiation. Does it feel oddly timely to be referencing Chernobyl this year, with all of the horrible events in Ukraine? No, I’m not trying to take any kind of advantage of people in an unfortunate situation. I think that’d be very vulture-like. That’s just not me: I never prey on other people’s misfortune.”

“This is about black magic. It’s about the stuff that I horsed around with when I was a kid: putting spells on people, or at least thinking that that’s what I was doing. Watching things change. Hanging out with people who were gullible, and who believed in the power of that black magic. Whether you think that it’s real or not, a lot of the power of that stuff is to do with the person who’s looking it up. If you put enough into something, there’s a power in the mind to make you believe that it’s real.”

“Junkie is a song that’s [quite] clearly about drugs – but it’s not really one that necessarily makes sense on first read. There are a lot of metaphors in there: ‘Monkey on your back!’, ‘Hopeless and dopeless!’, stuff about guys playing Russian Roulette. In the chorus, it talks about how this is something that the guy in the song lives for, and how it’s something that he’ll die for. I don’t think it’s about any one person I’ve encountered. It says a lot about a lot of people. It’s just a melting-pot of all the different people I’ve come into contact with over the years. When people are addicted to something, there is always that time of suffering when that substance is cut out. That could even apply to the new drug where they give to military amputees to deal [with phantom limb syndrome]. The power of the mind really is amazing. And this song is ultimately one of my ‘Wake up and smell the coffee!’ songs.”

“Psychopathy is really a kind of intro into Killing Time in the same way that Rust In Peace... Polaris was a two-part song. The first part is about how psychopathy and diagnoses like that are becoming more and more common for people with issues with learning or behaviour. You’ll hear about doctors diagnosing a child with ADD or ADHD, then they’re off to the races with the psycho-pharmaceuticals to help them while they’re at school. In the long run, though, it just makes them worse.”

“Killing Time isn’t about homicide. It’s about procrastination. Psychopathy [gives you the background] for the person that Killing Time is about. The subject the doctors are talking about is this guy who thinks he’s got it all going on. But everything that he does peels back another layer of burnt skin. It’s stripping back the paint trying to cover up the mess that this person is. I actually know someone who’s just lost everything. We’re talking hundreds of thousands of dollars ad a multi-million dollar company: gone. And he’d been warned. He was the slick dude in Life In Hell. He was the Junkie. He’s definitely the guy in Killing Time.”

“Is Soldier On! a song about war? No. It’s about how you need to be brave when walking away from a relationship. It’s like that Irish poem about turning your collar up against the wind and having the sun shine on your face. It’s about being in that relationship, knowing that something is not right, and understanding that you need to leave.”

“This is a song about a certain type of person, [who mindlessly pursue fame]. I don’t really know any of these people, but in a very short period of time you can evaluate them, whether or not you’re able to get all that deep. You can tell that they are not the type of people you want to be around. Like those young stars who are getting away with stuff, whether that’s getting married and breaking up, getting beaten up, or getting drunk and into terrible situations. I’m old enough to remember when stars and starlets used to take pride in how they presented themselves when they were out there as an artist.”

“Mission To Mars is basically Peace Sells Part Two. I was thinking about how to make that song fun, and the music felt so eerie to me that I thought a cool way to do that might be having it be about how we escape Earth, go up to Mars and discover that we had all started off up on Mars and bailed out on a spaceship to Earth. We didn’t start on Earth and go to Mars. We started on Mars, went to Earth, then went back to Mars. The super-cool thing about it is that John Clement, the guy who does the voice-overs, was part of that military group up in Kentucky that I was talking about earlier. He told me about the helicopters for Night Stalkers. He also did the cadence-calling at the end of Soldier On. He gave me a lot of the military terminology here.”

“I’d like We’ll Be Back to be as simple as a riposte to Megadeth’s doubters. I think it is! One thing that I know for sure is that it isn’t simple to play – at all! I guess it was a statement that needed to be made after everything over the last few years. It could’ve originally ended up anywhere on the record, but as the lyrics got stronger and stronger it became clearer and clearer that It’s that it fit as the finale. There are quite a few callbacks to older songs, like the line ‘big mistake’ which is a reference to ‘No more mistakes!’ from Holy Wars… The Punishment Due. This is a record where we’ve learned a lot about ourselves. Ultimately, though, We’ll Be Back a sign-off saying that just when you think it’s safe, Megadeth will be back.”

The Sick, The Dying... And The Dead! is out now via Universal