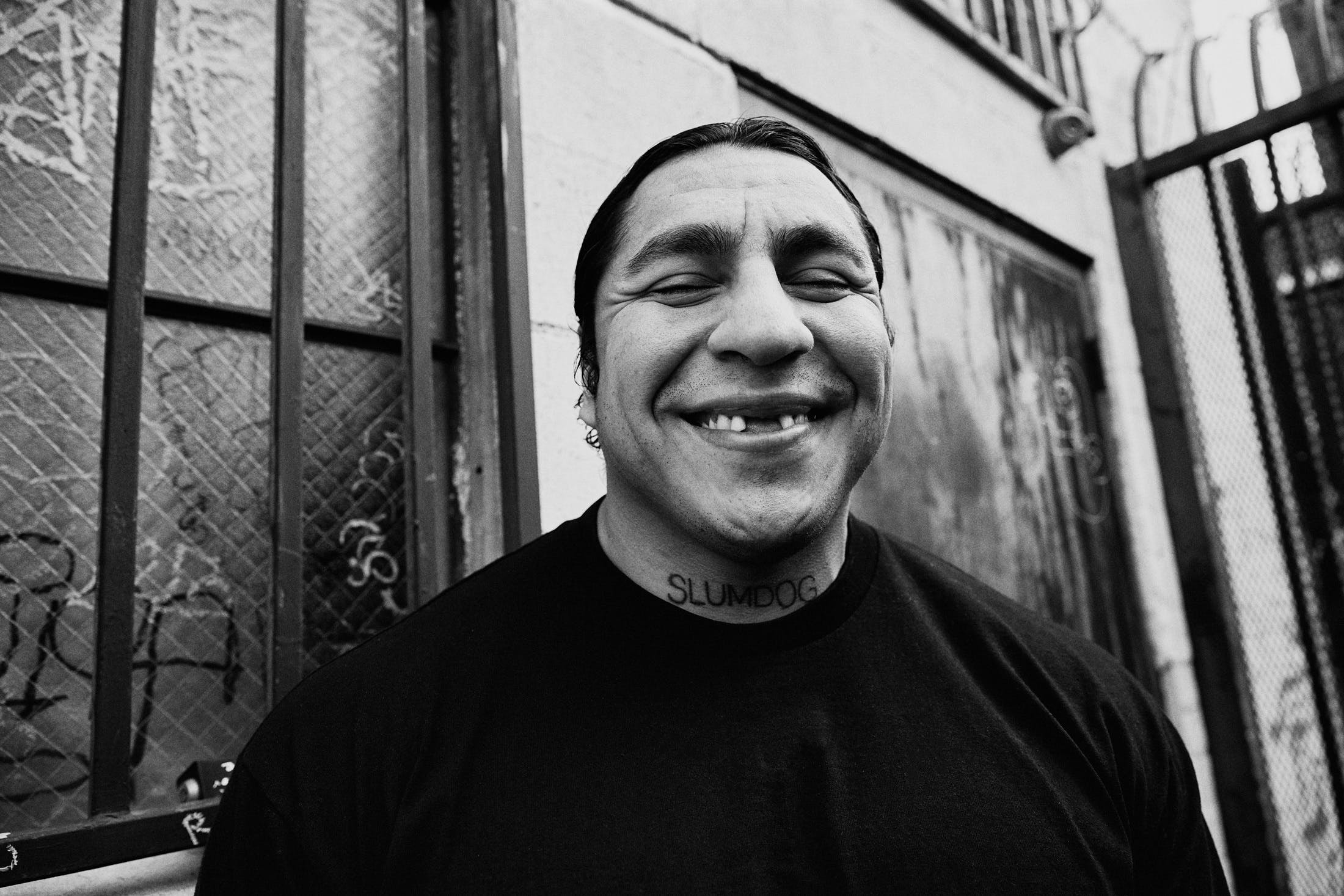 As far back as he can remember, Walter Delgado has been alone.

It is a bittersweet irony not lost on the hulking – but endlessly articulate – Rotting Out frontman that this is a truth with which he finally came to terms after landing on the wrong side of the high walls of Madison County, Ohio’s London Correctional Institution. Enforced isolation can make or break a man, he reasons, enjoying the comparative luxury of self-imposed Covid-19 quarantine on his comfortable home couch. Crucially, though, it can force an evaluation of the other barriers, societal and self-imposed, which drove us down the wrong path in the first place.

Born in Nogales, Mexico, a dusty border town on the southern side of Arizona, life was never going to be easy. When his single mother relocated to Los Angeles suburb Long Beach in 1989, the pursuit of a better existence came at a crippling cost both to herself and her then four-year-old child. “There was the language-barrier,” Walter kneads a painful memory. “A culture-shock, too. Then my mom started dating a man when I was about five or six. Unfortunately, he was not the role model that I had been hoping for as a fatherless child...”

An already strained home life was saturated by alcohol, drugs and an apparently endless cycle of domestic violence. “I didn’t get to have a childhood, per se. I was constantly thinking, ‘Is he home?’ ‘Is he drunk or on drugs?’ ‘Is he going to start screaming today?’ ‘Is he going to hit my mother or me or my little brother?!’ You have no choice but to adapt: lay down and suffer or keep moving.”

Movies and comic books delivered shimmering moments of escapism from a life in and out of La La Land’s abused women’s shelters. As gang-violence engulfed his adopted home in the early-’90s, suffering became the norm. By eight years old, he had started drinking to soften the endless abrasion of reality, but the “little hoodlum things” he found himself involved in were lost against a rising-tide of addiction, prostitution and bloodshed that threatened to overwhelm the city.

“I saw my share of bodies fall,” he remembers. “I’ve seen people die in front of me on my lawn, OD-ing in front of my eyes. We found children – older than I was, perhaps, but still children – stabbed to death on people’s properties.”

Aged 11, music came into his life through the city’s vibrant backyard punk scene. It was when Walter expressed a desire to get sober, and a friend pointed him towards straight-edge, that he was exposed to the sounds that would change everything.

“When I was introduced to hardcore,” he nods, “I came to realise it was very chaotic and violent. If there was one thing I did know about, it was chaos and violence. It almost got to be that I was running towards this music for the same reasons that I was running from my home life. It was comforting, in a way. It made sense.

“I didn’t go to shows to make friends. I wanted to go to see the band, to go off – to mosh, to sing along – and to feel for 20 or 30 minutes that everything was okay in my life. As soon as one show was over, I was thinking about the next one. I was essentially getting high. That was my outlet. That was the rush.”

Walter never had any intention of being in a band, let alone fronting one, but life finds a way. Rotting Out emerged from a chaotic LA scene in 2007, their frontman-to-be confined to guitar for their ‘07 Demo and This Is Just A Life 7”. When original vocalist Michael Craigs departed in 2010, however, and the band were forced with a choice to put-up or break-up, Walter reluctantly stepped up to the mic. Building a chaotic reputation with 2011’s Street Prowl and 2013’s The Wrong Way LPs, 2015’s sensational Reckoning EP – dropped on Pure Noise – should’ve been a breakthrough. Instead, it was their breaking-point.

“A bunch of things happened at once,” Walter sighs, of the series of events that led to his walking away from the band mid-March of that year. The heartache and distrust of a bad relationship was eating away inside. The deaths of a couple of friends had rocked him. Self-doubt was nagging, too, undermining his belief in any long-term prospects for the outfit, and forcing him to question whether it was worth sticking at a project that was supposed to be about that cathartic release, but had become more and more like a job. Abandoned studies in physical therapy and kinesiology hung over everything, too. “All these new experiences and hurdles to overcome seemed to arrive at the same time,” Walter continues, “and all I knew was to up and run away.

“I honestly wish I hadn’t…”

When news broke, almost exactly 12 months later, that the notoriously sober singer – once known as ‘Wally Edge’ – had been convicted for trafficking 70lbs of marijuana and 1,000 jars of hash-oil, it was met with a mixture of bewilderment and disappointment. With retrospect, however, this opportunist “side-hustle” gone-wrong was the turning-point to get back on track.

“Of course going to prison sucks,” he stresses with a wry smile. “The place is a shithole. The violence, the slurs and the machismo were the easy part. I’d grown callous to them on the streets: people fighting, getting stabbed, doing drugs, saying racist, sexist, homophobic things. The hard part was being broken but not letting anyone see it. Going to prison broke my heart because of what I was putting my family through, but I couldn’t show that. It didn’t matter if I’d just had my mother crying down the phone. I couldn’t seem like I felt sorry for anybody or anything.”

On the other hand, it was a space for self-reflection, and one with access to much-needed professional therapy. Even reflecting on being caught on the sharp side of the United States’ quickly-evolving drug laws, Walter has no regrets.

“I don’t want to ask, ‘Why me?’ I’m not mad. I’m glad that that happened when it happened. I gained so much insight from the [experience and therapy] inside. No-one else has ever forced me to sit there and look those things in the face ‘til I was bawling my eyes out. It was the beginning of my getting diagnosed with things I didn’t want to think I had: PTSD, depression. Also, this weird burden of guilt had just sit in my belly my whole life like the bones of a miscarriage that never left.

“They’re things given to me without asking, but which you can’t just lay down. You don’t get rid of them, you learn to manage them. And it was vital that that I did. If not for that, I’d still be doing dumb shit and probably wouldn’t even be in Rotting Out.”

Having overcome the additional threat of deportation back to Mexico, Walter was released in November 2017 at the end of an 18-month sentence. After initial uncertainty, a raucous headline set at Sound & Fury Fest 2018 shunted Rotting Out back on track. Older, wiser and more roadworn, the band – guitarists Afredo ‘Tank’ Pedrozo and Carlos Morales, bassist Benji Ruiz and drummer Jorge Cabrera – understood the need for clear common-purpose.

A new story needed to be told, too. Fiercely autobiographical third LP Ronin, released earlier this month, is Walter’s acknowledgement that nothing should be held back.

He reflects on the moment, laying in his prison bunk, leafing-through Kazuo Koike’s legendary manga Lone Wolf & Cub that its concept shifted into focus. “The deeper I got into the plot, the more I related to: the idea of the Ronin of this masterless samurai, this paid assassin wandering alone and following paths that leads into some bad situations. My whole life I’ve felt like I’ve had to attack things by myself. A lot of the time I really was on my own. I took all of that into this album: that understanding that I can’t go around pointing fingers at people any more because these are things only I can control. I’ve self-sabotaged myself so much.”

And as that path twists back into the light, with the band’s first LP-release shows in seven years looming, how will the new positivist approach – and role as hardcore elder-statesmen – affect them?

“The fact that I am seen as anything put on a pedestal,” Walter laughs, “is crazy to me because I still feel like a fucking idiot half the time. I still get nervous every single time I get onstage. I prefer it when the kids take a hold of the show and it’s no longer about Rotting Out, but about the night itself: right now, those 40 minutes before it’s gone, and what you do with them. It’s almost part of that survival instinct: not knowing what’s coming down the line and grabbing whatever you can.

“In terms of our place in hardcore, I don’t see Rotting Out as frontrunners in anything. The important thing is we might get to play with bands like Vein or Knocked Loose and maybe kids will see that we sound nothing like those bands. But maybe some of those kids will hear what I’m saying and think it makes sense to them.

U.S. hardcore ragers Rotting Out hit back hard on first album in almost a decade, Ronin

"Going to prison was probably the best thing that ever happened to me." Rotting Out frontman Walter Delgado gets real.