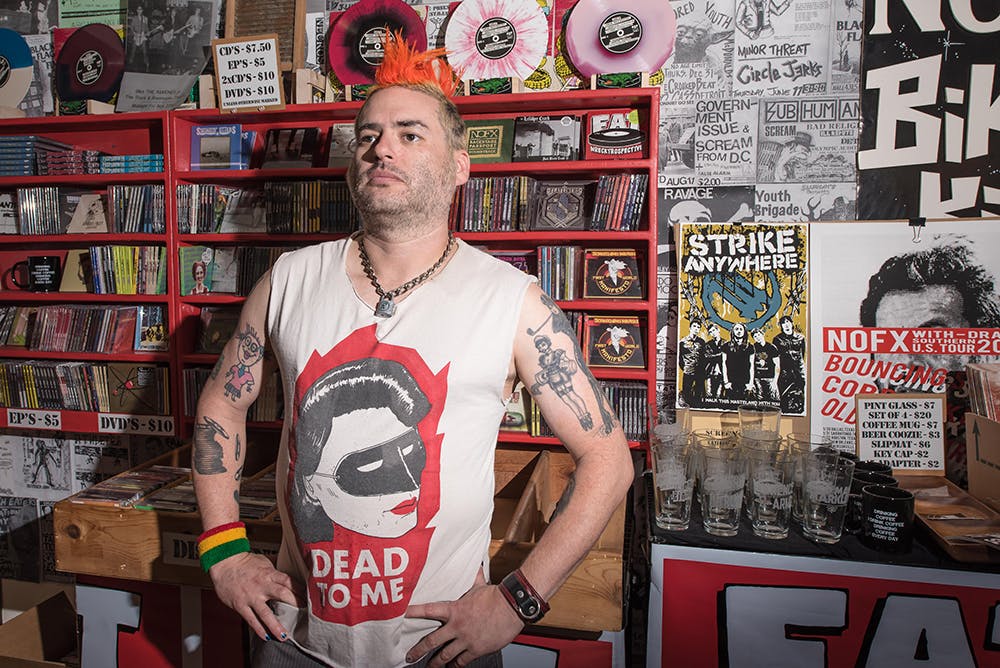 It’s Wednesday and Fat Mike is asking if it’s Thursday. “My life is an absolute…” he pauses for a moment. “I wouldn’t say ‘shambles’, but… yeah.”

It’s easy to forgive Mike for not knowing what day it is. He’s just flown back home to San Francisco from New York, where he’s been painstakingly preparing his new musical, Home Street Home, for the big time. Right before that he was recording songs with Travis Barker – songs he wrote while drunk in his dining room after a night out. Oh, and before that he took a 10-day road trip with his 13-year-old daughter, Darla, and like something out of Wes Anderson’s wildest punk rock dreams, they got stranded at sea aboard Fletcher from Pennywise’s boat and had to be rescued.

All things taken into consideration, it’s understandable that Fat Mike doesn’t know what day of the week it is. And that’s just fine by him. Fat Mike plays the clown a lot. Sometimes literally, through his infamous alter-ego Cokie The Clown, sometimes figuratively, through NOFX’s cutting, cynical and often hilarious lyrics. But if you take Fat Mike for a fool, then the joke is on you.

Make no mistake, Mike Burkett – the man behind the make-up – is a force of nature. His record label, Fat Wreck Chords, introduced a generation to fast, angry, witty punk music. His band has been a punk rock powerhouse for decades, and now he’s eyeing up Broadway.

Has living free of the concepts of shame and pride had a noticeable impact on your daily life?
“Oh yeah, for sure. Living without shame or pride is a really great place to be. I’ll give you an example: the woman I’m seeing right now, I met her at my kid’s school. She’s a normal woman – a psychiatrist. She’s never tried drugs, listened to punk rock or done BDSM. She’s a professor, she’s incredibly smart, and I just walked over and said, ‘Hey, wanna come over to my house and get dressed up in some latex and get weird?’ And she’s like, ‘Yeah!’ I would never have been able to do that a few years ago. But I just don’t care anymore. I don’t care what people think and I just do whatever the fuck I want to.”

That’s a hell of a chat-up line. How can we be so brave?
“Well, my mum used to joke about it, but she would leave me in my crib to go party every night. I never had a babysitter my whole life, I was always by myself – it’s a repressed memory that came back. I would come home from school and be alone when I was five or six years old and I was completely by myself. So yeah… fucking is great and all, but with BDSM you get a lot of attention! It’s a spectrum of emotions and feelings and sensations, and I consider myself a sensation junkie. All the whips and the rubber and leather and the attention of two to three mean women all night… it really makes up for being left alone for so long. I love it. Plus, it’s fucking hot.”

Have you experienced any negative consequences from that lifestyle?
“Not really. I don’t dress up to look like a girl, I just like wearing dresses – it makes me feel like a punk rocker again. I guess one negative is my daughter thinks I’m weird.”

But all kids think their parents are weird, don’t they?
“Yeah, but Darla said, ‘Dad, I know you wear dresses, but you look like a stripper tonight’ (laughs). It’s okay, though. Actually, I went on a 10-day road trip with her recently, which is something I would recommend to any father. I’m going to try to do it once a year now. It may be the best thing I’ve ever done, actually. I took her around California and we got up to all kinds of cool shit. She came back and told her mom it was the best time she’d ever had with her dad. Don’t just do a family trip – family trips are bullshit. Spend some extended time with one kid. My parents never did anything like that with me. We connected so much on that trip. We got into so much trouble…”

Dare we ask what kind of trouble?
“It was super fucking funny. One night we ran into Jesse [Hughes] from Eagles Of Death Metal. Let’s just say he’s not the most child-friendly guy; that was fun. Then Fletcher [Dragge, guitar] from Pennywise took us out into the ocean on his boat. My daughter got to drive for a while and then we broke down and had to get rescued by the coastguard. It was a proper road trip. Oh yeah, and I showed her The Rocky Horror Picture Show for the first time, too. We listened to the soundtrack in the car every day. Just shit like that.”

Are you impressed that NOFX are still going strong after 35 years?
“If you’d asked me that question 20 years ago, I’d still have been impressed (laughs). NOFX is my family. They’re not like my family, they are my family. But punk bands don’t know when to fucking quit.”

Is it heartening to you that so many old punk bands are still going?
“Yeah! Look at Charlie Harper [U.K. Subs, aged 73] – he’s still doing it! There are some bands that just can never be bettered. Take Bad Religion, for example. They’re great, no-one has ever bettered what they do. They’re like AC/DC, no-one got better than them, but they passed down their sound. We’re more like the Iron Maiden of punk. Other bands sound sort of like us, but we have our own sound and we’re the best at it. That’s why people still wanna see us. Our band’s also pretty silly and Iron Maiden are pretty silly.”

Aside from the band, your label Fat Wreck Chords is still going strong, too…
“Yeah, we’re still signing bands. I feel like I’m never there because there’s just too much other shit going on in my life, though.”

Did you ever run into trouble when you were signing bands that were friends back in the day?
“No, it never got awkward. Loads of those bands were my best friends. To me it’s the best job in the world. I was lucky to work with and sign guys like my best friend [late No Use For A Name frontman] Tony Sly.”

Did Tony’s death bring you closer to people?
“Well, I like to take pictures with my friends a lot more now. My daughter Darla and his daughter Fiona are best friends, which is really cool. Sometimes, though, when Fiona looks at me, she looks like she misses her dad. That’s really sad.”

The girls recorded together on Generation Z, the apolocalypse-embracing closer on the last NOFX album, right? Is that song representative of where your head’s at politically?
“Don’t even go there. I think all our heads are the same. It’s so fucked.”

But you founded Punkvoter.com and put together Rock Against Bush to chuck George W Bush out of office…
“Yeah, but this is some end-of-the-world shit. It’s what you get for having a country of totally stupid people. I can barely even talk about it without getting angry.”

Do you think there’s anything that can be done about it all?
“Actually, people think this is a joke, but it’s not. I wanna become a demotivational speaker. I want to talk to people about being happy, but making them realise that happiness has got nothing to do with success. Success is not happiness. When I was going to college and living in my van and only had $300, I was super happy. In America, all anyone thinks about is buying a house or buying a car, but all they do is work… for stuff. And what they should be doing is figuring out how to be happy.”

On the subject of making it happen, how is your beer and music festival called Punk In Drublic going?
“It’s amazing. There are only five bands – bands like NOFX, Bad Religion, Less Than Jake – and it’s 21-and-over, so no kids are allowed. Oh, and there’s free beer. We don’t go online and ask kids what bands they want to see. We tell kids what they want to see. And then we tell them that they can’t come because they’re under 21 (laughs). It was so successful that we’re doing way more shows next year.”