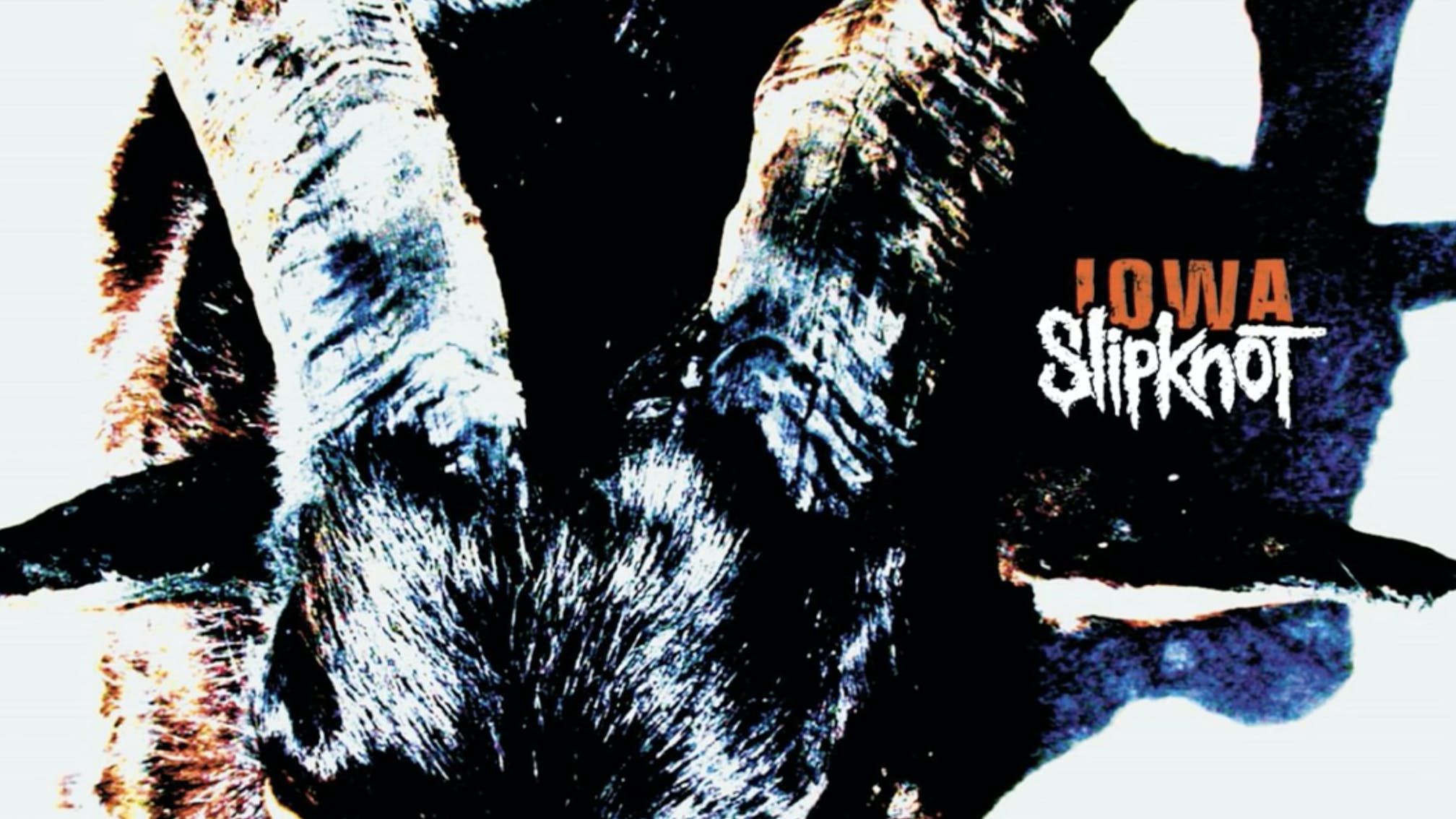 This is the original Kerrang! review of Iowa from 2001.

People equal shit. Or at least the ones who are just gagging for Slipknot to fall flat on their masks.

Y’see, the Des Moines maulers are no longer classic underdogs, but the very bourgeois of bludgeon. Once the outcasts wandering around their metallically desolate hometown practically begging for attention, they’re now satanic superstars who seem intent on talking up some non-existent press backlash.

Iowa, their second album proper (discounting 1996’s self-financed, limited edition Mate. Feed. Kill. Repeat. disc), certainly isn’t the album to provoke that backlash – at least not in these quarters. Which is impressive, considering how much it has to live up to. For one thing, the band started babbling on about it shortly after their Slipknot debut emerged. “It’s going to be like the first album times 10!” shrieked drummer Joey Jordison to everyone and everything within earshot. Given that Slipknot was the finest heavy album of 1999, such statements saw the band making rods for all nine of their backs.

Amazingly, Iowa lives up to the hype. The biggest surprise, on first listen, is that it’s not the pure blitzkrieg that the ’Knot may have led us to believe. This is a varied 70 minutes, with dark layer after dark layer piled on. No way was it knocked out in a few frenzied sessions – as the repeatedly-delayed release date testifies. This is one beautifully crafted labour of hate.

Following the intro 515 (a rumbling generator, tormented screams), People = Shit proceeds to deliver what Joey has been promising since November 1999. Hammering blast-beats and screams give way to a Soulfly-esque bounce-riff and some speedy rapping and roaring from frontman Corey Taylor. Throw in a wonderfully spiteful chorus and you’re flat on your back, sizzling.

Disasterpiece confirms that the Des Moines boys are set to the first band to take death metal to multi-platinum status. One of the album’s weirder musical moments, it features a Morbid Angel-esque crunching mid-section, with intricate twin guitar work from Mick Thomson and Jim Root. It also sees the album’s first melodic vocal lines in ‘I feel like I’m erased, so kill me just in case.’

More melody infests the chorus of My Plague, which this time sees Corey adopting a reverb-drenched style akin to Fear Factory mainman Burton C. Bell. Again, Mick and Jim let loose – the latter clearly relishing being able to contribute mental riffs to this album, having arrived after the completion of Slipknot.

The most powerful hook, however, comes courtesy of Everything Ends. This one combines more bizarre arrangements with a stomping Cannibal Corpse-like section and a downright brilliant chorus, seemingly about the demise of a relationship.

As you’ll know, if you were one of the thousands who downloaded The Heretic Anthem as a free MP3, it’s a tour de force of hard-hitting evil. Along with People = Shit, it’s the finest heavyweight track on the album, with some mind-blowing moments of chuggery which fans of thrash metal will undoubtedly lap up like cream-faced moggies.

Iowa’s frenetic pace first takes a slight breather with Gently – a track originally featured on the aforementioned Mate… disc, with old singer Anders Colsefni on vocals. Unsurprisingly, this version is far better, building up like some broody film soundtrack and bringing Slipknot’s percussive ‘power triangle’ back to the forefront. Corey sounds particularly impassioned here, possibly because he knew comparisons would be made with Anders.

Left Behind is destined to be the first single from the album and you can understand the choice. Very broadly speaking, this is the album’s Wait And Bleed, with a great, memorable chorus (‘As I close my eyes, I feel it all slipping away’) and some joyously warped riffing once again.

Whether or not The Shape has been lyrically influenced by the ’Knot’s mentor, Halloween killer Michael Myers, it’s musically as murderous. It’s also madder than a duck with arms.

Skin Ticket sucks us back down into Slipknot’s personal hellhole, where songs are slow, percussively-driven and intimidating. This ranks as their finest achievement in this department, with a genuinely eerie vocal refrain: ‘Come see my cage, built in my grave…’ More than a little skin-pricking.

Coming straight afterwards, New Abortion sounds a shade ordinary by this band’s standards, but does feature some weird bird-like samples and some coiling heavy riffs. Metabolic is much better, recalling Slayer and again seeing the guitarists stretch their formidable abilities with a succession of shredding set-pieces.

The title-track wraps matters up in an extremely long-winded fashion. On first listen, at 15 minutes, it seems way long, but this is largely because you’re still craving more mayhem. Slipknot at their bleakest and most disciplined, Iowa is underpinned by a relentlessly moody bassline from Paul Gray, amid a soundscape of disquieting, demonic laughter creaks and some typically creepy serial killer lyrics from Corey. Definitely one to lose yourself in with the aid of headphones, provided no-one’s around to tap your shoulder and give you a coronary.

So Slipknot emerge with their integrity intact, without having descended into white noise as some feared. You get the impression that this album is built to last: over the next months, and no doubt years, we’ll witness new layers unfolding. The work of DJ Sid Wilson and samples guru Craig Jones is less blatant this time around, but this is because they’re more tightly embedded into the machine. There’s some crazy shit in these here grooves.

Bizarrely, there’s one more track, I Am Hated, which we haven’t been able to review. As with Tool’s Lateralus album, we had to visit the record company offices in order to hear Iowa as no advance promotional copies were sent out. I Am Hated was added to the album at the last minute and no-one apart from the band and their mothers seems to have a copy at the time of writing.

With or without this bonus cut, Iowa remains the best thing to happen to heavy music all year. Again.