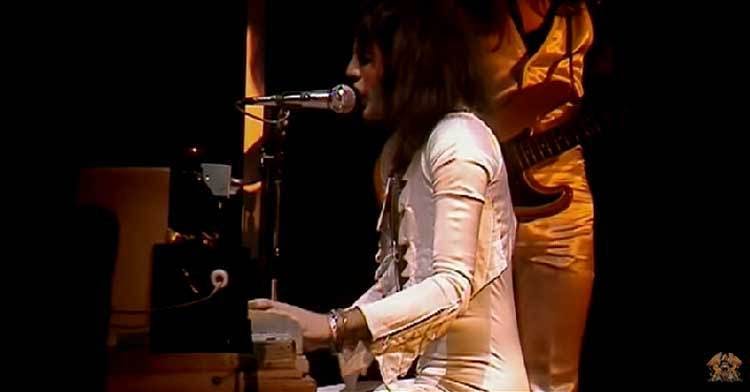 For the first time in history Bohemian Rhapsody will be released on 12 inch black vinyl with the original B-side I’m In Love With My Car on 27 November. They will also release A Night At The Odeon, Live At Hammersmith ’75, on CD, DVD & Blu-Ray.

Watch the newly unveiled clip of the band performing the track live at Hammersmith in 1975.

The celebrations don’t end there either, on November 6, 7, 8 you can recreate the famous Bohemian Rhapsody head banging scene from Wayne’s World at Westfield Shepherds Bush. Shoppers will be able to film their own version of the scene in a replica of the 1978 AME Pacer used in the movie.

Roger Taylor joins Chris Evans on his Radio 2 Breakfast show and Shaun Keaveny on 6 Music Breakfast. Bohemian Rhapsody will then be played out across all major radio stations. Look out for a special announcement of a huge celebrity collaboration with Queen for Children In Need.

– Label EMI and manager John Reid deemed the song too long and advised an edit. Kenny Everett aired the song on London’s Capital Radio in its entirety, 14 times over the last weekend in October 1975 and by the Monday Morning, record stores were inundated with requests.

– It was the only song to win Queen an MTV Music Video Award.

– It is the most popular Muppets cover with just over 47 million views on YouTube.

– In November 1991, Bohemian Rhapsody became No.1 for a second time, when it was re-released by Queen immediately after Freddie Mercurys passing to raise money in the fight against AIDS. 16 years after its original release.  This was the first time a song had topped the charts twice. In 1992 the song had yet another revival from the popularity of Wayne’s World with that famous clip.

– It is generally recognised as the first promotional music video ever and it was based on the band’s Queen II album cover. Directed by Bruce Gowers, it was shot in 3 hours for £3,500 at the band’s rehearsal space.

– This was Queen’s first Top 10 hit in the US. In the UK, where Queen was already established, it was #1 for 9 consecutive weeks, a record at the time.

– A Night at the Opera was the most expensive album ever made at the time. Queen used 6 different studios to record it.

– Mercury may have written ‘Galileo’ into the lyrics for the benefit of Brian May, who now has a PHD in astrophysics. Galileo is a famous astronomer known for being the first to use a refracting telescope.

– Scaramouche is a stock character from commedia dell’arte (improvised Drama from the Italian 16th century), a buffoon who always manages to wriggle out of the sticky situations he invariably finds himself in, usually at the expense of someone else. Original name ‘Scaramuccia’ means ‘skirmish’. ‘Scaramouch’ means a boastful, yet cowardly person.

– Freddie played the same piano for Bohemian Rhapsody that Paul McCartney used for the Beatles’ ‘Hey Jude’. It was Trident Studio’s stock piano, also used by Elton John, David Bowie and Carly Simon, among many others.

– Bohemian Rhapsody was one of five songs Freddie wrote for A Night at the Opera.

– Bohemian Rhapsody has been covered by many artists over the years, including some rather unlikely ones, such as Pink, Kanye West, Robbie Williams, Elaine Page, The Royal Philharmonic Orchestra, Montserrat Caballe, The Muppets, and Elton John & Axl Rose (at the Freddie Mercury tribute concert in April 1992).

– Bohemian Rhapsody was voted The Song of the Millennium in 2000, and the Guinness Book of Records’ No 1 song of all time.

– Bohemian Rhapsody was pressed on blue vinyl in 1978. Only 200 were pressed, and thus it is one of the most collectable records of all time.

–  Bohemian Rhapsody first featured in Queen’s live show in the 1975 UK tour, which commenced in Liverpool on November 14th. It would feature in every concert thereafter, including Live Aid in 1985 and Queen’s final show with Freddie, on August 9th 1986.

– Like all tracks from the NATO album, Bohemian Rhapsody was produced by Roy Thomas Baker and Queen, with Mike Stone engineering.

Check out Queen in 18 Iconic Albums With Kittens On The Cover: