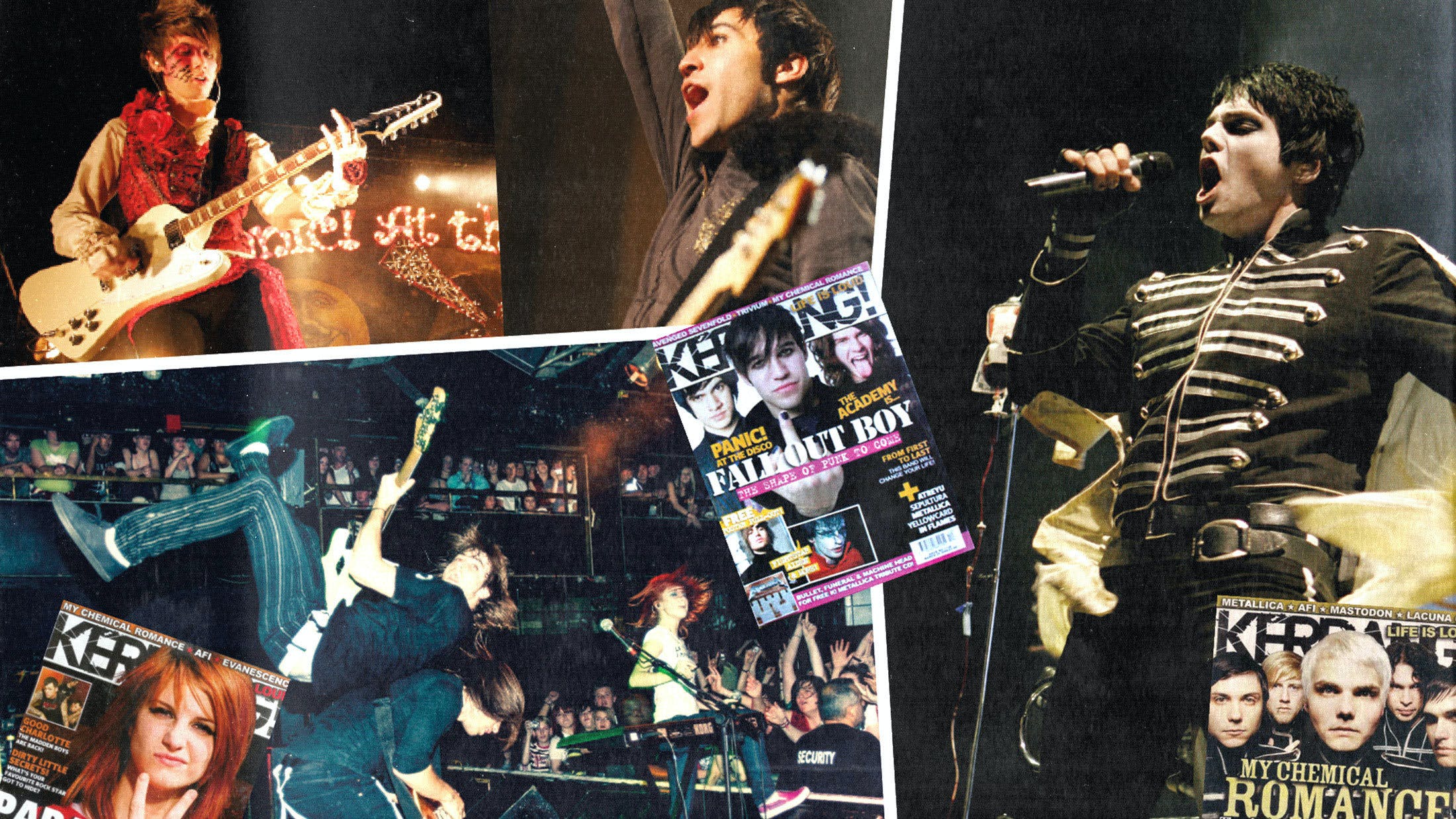 Few genres can lay claim to dividing opinion quite like emo. There’s rarely any middle ground – you’re either all in or all out. Around the turn of the millennium, artists like Jimmy Eat World and Dashboard Confessional paved the way for a fully-fledged mainstream breakthrough, thanks to their poppier interpretations of a genre that had long-laid dormant since its woollier origins in post-hardcore throughout Midwest American suburbs in the 1980s.

By 2006, what was formerly bubbling under finally exploded into worldwide public consciousness, spearheaded by the undeniable charisma and collective talents of its main players. As each of their career trajectories rose rapidly skywards, artists such as My Chemical Romance, Fall Out Boy, Panic! At The Disco and Paramore admittedly shared few, if any, real surface similarities. But students of the Slayer way these bands were not. Even if no-one could quite agree on what did or didn’t constitute ‘emo’, most rock fans recognised it when they saw and heard it, despite the bands themselves often appearing unwilling to become fully paid-up members of the club.

But if ever a period of time represented the peak of this most nebulous of genres’ powers, it was 2006. It was this 12-month stretch that solidified the superstar status that many of today’s still-prominent rock figures enjoy, shifting the cultural dial within alternative music forever.

Eyeliner, floppy fringes, studded belts and MySpace were all the rage. Copycat artists surfaced in their droves. All of a sudden, singing songs about your feelings was where it was at. And for a while, emo felt like the most important thing in the world, even if it did also face a ferocious backlash from the tabloid press and close-minded rock gatekeepers alike. Here, then, we take a trip back in time, to when emo ruled the world…

Fall Out Boy landed their first ever Kerrang! cover on January 28, as we hailed them ‘punk’s new superstars!’ ahead of their sold-out UK tour, ending on a triumphant two-night stand at London’s Astoria. Bassist, lyricist and band spokesman Pete Wentz had missed their previous tour in February 2005 following a nervous breakdown and an overdose from prescription drugs. But propelled by the huge U.S. radio success of breakthrough single Sugar, We’re Goin’ Down (officially released in the UK to coincide with this tour), however, the band were fast becoming a phenomenon.

“Here in the UK this already feels like an intimate relationship,” Pete told Kerrang!.

Asked if he reckoned the band could top the success of Sugar… he was in bullish form. “We have this song called You Can’t Spell Star Without A&R [later renamed This Ain’t A Scene, It’s An Arms Race]. I think that’s going to be way more colossal than Sugar…. When I hear it, I see a movie that hasn’t been written yet.”

Meanwhile, fellow Chicagoans The Academy Is… were tipped as “emo’s next megastars”.

A band who would have something to say about that were theatrical Las Vegas curiosities Panic! At The Disco, opening for The Academy Is… on their first-ever visit to the UK at the end of January. The band’s then-18-year-old frontman Brendon Urie admitted that hysteria was such that he had been pulled offstage by female fans and demand was so high the tour’s London venue was upgraded twice. Kerrang! charmingly decreed that “word of mouth is spreading via the internet faster than a herpes break-out in a brothel”.

The band had freshly signed to Pete Wentz’ Decaydance imprint label just a few months earlier and their album wasn’t even released in the UK until February 2006, months after its songs had been illegally spread on file sharing sites like Kazaa and LimeWire. And to think that the frontman had very nearly quit the band to go to hairdressing college before things took off…

“I feel like I haven’t woken up yet – like I’m still dreaming,” he said as their profile skyrocketed. “It’s a bit of a phenomenon.”

A mark, a mission, a brand, a scar

On March 14, Fall Out Boy re-released their second album From Under The Cork Tree with five bonus tracks, which aligned with the trio of Pete Wentz, Brendon Urie and William Beckett hitting the cover of Kerrang! together.

“A generation of stunning new bands are taking on the world,” we said. “It’s a scene that abandons darkness and self-pity in favour of positivity and sparkling pop hooks. It’s a mutiny for the MySpace generation, delivered in infectiously catchy gems of brilliant, radio-friendly, dancefloor fillers.”

Pete agreed that something unique was brewing. “I feel something special between our bands,” he admitted. “I’m really excited to be a part of it, whatever it is. I hope we’re able to make it a movement. Right now, we have the spark of something.”

Brendon, meanwhile, rejected the emo tag. “If a band whines, they’re emo. If a band is angry, they’re punk,” he reasoned. “We’re not into that. We’re just making music that we enjoy and people are responding to it.”

What’s in a name?

Having released their Life On The Murder Scene DVD on March 21, My Chemical Romance rolled into the UK to headline Give It A Name festival at the end of April. The documentary showcased the band’s early days, featuring live performances, music videos and behind the scenes footage that revealed how far they had come in a few short years. When the New Jersey punks were on the road supporting Underøath in the U.S. they had to steal T-shirts from the headliners because they couldn’t afford their own clothes. With Three Cheers For Sweet Revenge notching two million sales worldwide, however, their time had finally arrived. And as they touched down on our shores, Gerard Way told tales of ghosts roaming the halls in the Silverlake, Los Angeles studio where the band were doing pre-production on its then-untitled follow-up.

Elsewhere, bill openers Panic! At The Disco sold out their 12-date UK headline tour in one afternoon, and Give It A Name Introduces Tour stars Paramore first sprung into view, boldly promising UK audiences “the best half hour of your life!” ahead of the release of debut album All We Know Is Falling.

Fall Out Boy’s Black Clouds And Underdogs tour wrapped up in May, including a victorious headline slot at the first-ever Slam Dunk in Leeds Millennium Square. They subsequently hit the studio with producer Babyface, as Pete grew more reflective about the blossoming emo scene. “Everyone’s little black hearts are going to break,” he said of the songs that would become Infinity On High.

Later that summer Panic! At The Disco landed on their first full-band cover as we joined the quartet on a riotous rip through North America.

As Reading festival rolled around, Brendon Urie got hit on the temple by a bottle and knocked unconscious seconds into their main stage appearance. “I’ve never had to worry about bottles being thrown at me before,” he said. “It was a good shot!”

Meanwhile, a mysterious website theblackparade.com had emerged as cryptic posters appeared in U.S. cities and MCRmy members received Black Parade promo material along with a note that said ‘October 2006…’

On August 22, The Black Parade was finally unveiled outside London’s Hammersmith Palais as black-hooded figures and fans dressed in funeral attire holding branded placards lined the streets, before My Chemical Romance debuted their new look and sound that evening.

“My whole life felt like it had been leading up to that moment,” Gerard later gushed. “It’s bringing pageantry back to rock. This is a very epic record.”

Fresh from leading fans in a chat of ‘Fuck The Daily Mail!' at Reading (at which, like Panic!, his band were also bottled) in response to a scaremongering article by the newspaper titled ‘Emo cult warning for parents’, Gerard adopted the role of the voice of his generation.

“The ironic thing about The Daily Mail and [getting bottled at] Reading stuff is that they both involved people who wanted to silence the band,” he laughed, “but what happened was the direct opposite. It actually made us explode… it gave us such a voice. When people try to shut you up, you just get a lot louder.”

And that’s exactly what happened. My Chem scored their first Number One single, (Welcome To The Black Parade) as The Black Parade entered UK charts at Number Two, the band went on to sell out their biggest shows to date, swiftly followed by the announcement of an arena return in 2007. Truly, emo had hit its zenith, as untold numbers of disaffected youth found solace in artists of a more sensitive disposition, who shared their often-misunderstood worldview.

“2006 is going to be one of those years that sticks out in my entire life,” Gerard told Kerrang! as he looked back at the 12 months that had seen both he and his peers take the throne in style.