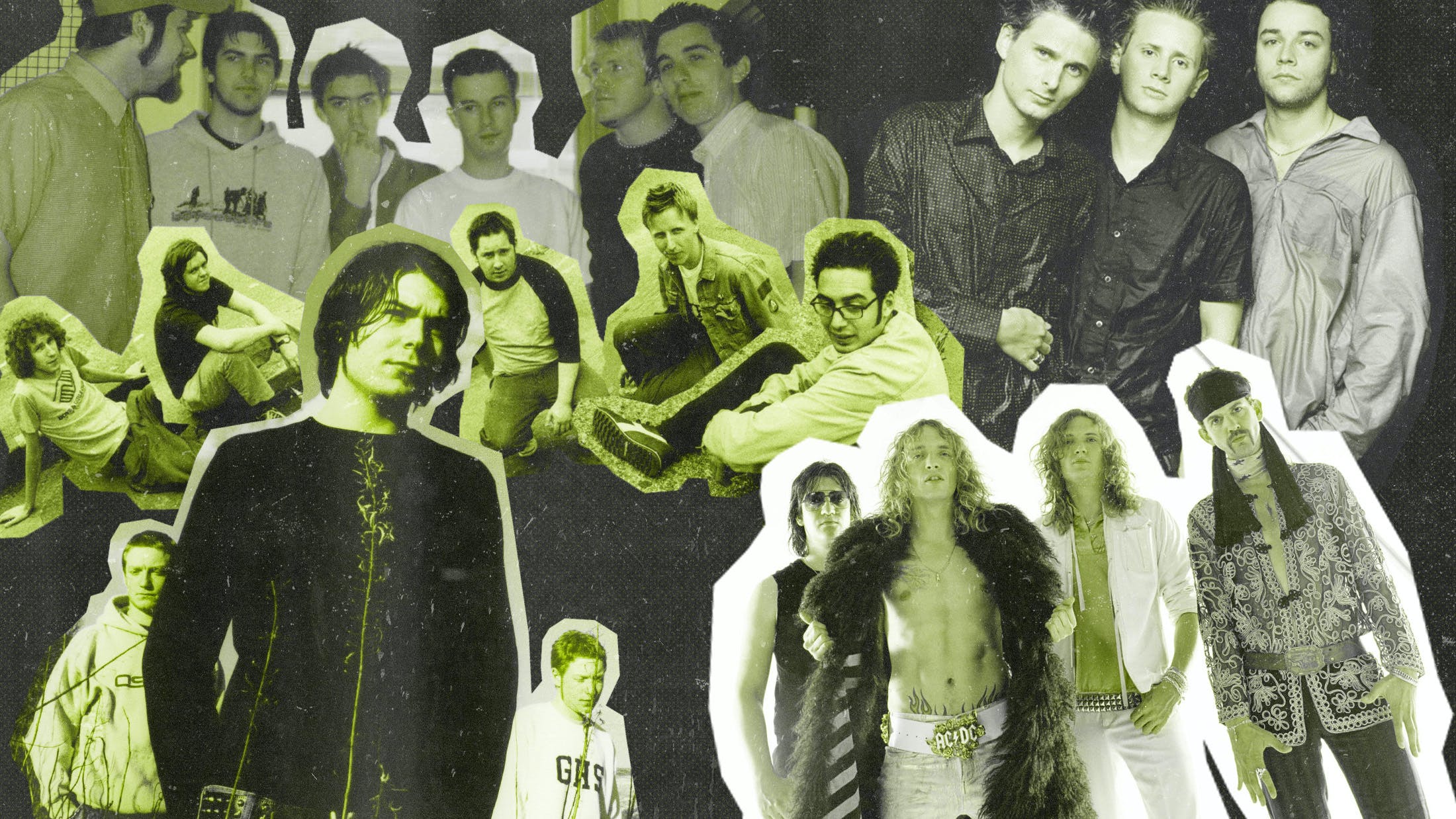 A look back at the year-end charts for 2001 might suggest this was a moribund period for British guitar bands. There were rock acts dotted throughout the list of the year’s biggest-selling singles and albums: Linkin Park’s debut album Hybrid Theory sold an astonishing three-quarter of a million copies in 2001, and on the Singles Chart, buoyed by rotation plays on Kerrang!’s own newly launched TV station, novelty hits from Alien Ant Farm (a cover of Michael Jackson’s Smooth Criminal), OPM, Wheatus and Crazy Town were tucked in behind Limp Bizkit’s rock club favourite Rollin’. But these were all American artists. The biggest English guitar band on the charts who might conceivably feature in the pages of Kerrang!? That’d be Pink Floyd, with their fourth compilation album, Echoes: The Best Of Pink Floyd.

But from the underground, something was stirring…

“What’s big in England is mostly simplistic bollocks,” was the opinion of Muse frontman Matt Bellamy. Prefaced by stunning alt.prog singles Plug In Baby and New Born, the Devon trio’s second album, Origin Of Symmetry, had recently crashed into the UK charts at Number Three, the French charts at Number Two, the Italian charts at Number Five, and Japan’s international artist chart at Number One, and speaking to this writer in Tokyo shortly after its release, Matt was understandably bullish about their future prospects.

“Over here and in Europe people find the biggest British bands quite bland and dull and they respect bands who make more experimental, ‘emotional’ music,” he said. “I was pretty aware that this album was difficult to swallow compared to [Muse’s 1999 debut] Showbiz and I thought we were taking a bit of a risk, but our success has given me the confidence to push things further.”

The following month, Muse would be rewarded for their courage by winning the Best British Band trophy at the eighth annual Kerrang! Awards, hosted at London’s Royal Lancaster Hotel. In acknowledgement of the scene’s burgeoning profile, the ceremony was being televised for the first time, on Channel 5, and was the subject of much media attention. “It’s nice to see that, finally, the whole wide world has come around to our way of thinking,” noted K! Editor-in-Chief Phil Alexander in his introductory speech. With the nu-metal scene is at its peak – Phil pointed out that one band in the room, Staind, were Number One on the nation’s Albums Charts, with the previous year’s K! Awards triple-winners Slipknot as odds-on favourites to secure that same top spot the following week with Iowa – American bands won big, but there was recognition too for Grant Nicholas’ Feeder, acclaimed as the Best British Live Act, who were riding high on the success of their Echo Park album, and had recently supported Muse on tour in Europe.

“We won an award in another music magazine last year, but this is much better,” insisted Matt Bellamy after collecting the trophy from Queen guitarist Brian May. “When we first came out, people thought we were a whiny indie band, but we've always been a heavy band when we play live.”

Asked if he had a message to impart to Kerrang! readers, Matt’s answer was instant.

Indeed, the resurgence in the homegrown heavy music would soon be borne out by another young British band who joined Muse on the road in 2001, becoming stars in their own right: Hampshire post-hardcore quintet Hundred Reasons. Signing to Columbia Records, the band crashed straight into the UK Top 10 with their debut album, Ideas Above Our Station, in May 2002. Come the Kerrang! Awards that same year, they would deservedly secure the Best Album accolade.

If one were to identify a singular moment in time that encapsulated the renewed confidence among a newly aspirant Britrock pack, one could do worse than zoom in upon the Kerrang! Weekender festival staged at Pontins Camber Sands Holiday Park on the weekend of October 4-6, 2002. While the bill boasted a solo-flying Alice In Chains guitarist Jerry Cantrell among its headline draws, the real excitement lay with the astonishing amount of homegrown talent on display: from the ashes of teen-punks Symposium the muscular Hell Is For Heroes had risen, and they were joined at the three-day event by the fast-rising Cooper Temple Clause, My Vitriol, Million Dead (fronted by future arena-filling singer/songwriter Frank Turner), Queen Adreena, Skindred, Funeral For A Friend, Raging Speedhorn and Reuben. Also tucked within this stellar line-up of emerging stars sat two more young bands who would emerge as future festival headliners in the UK and beyond.

On paper, Biffy Clyro didn’t look like a band who, 18 years on, would be chalking up a third consecutive UK Number One album (with the brilliant A Celebration Of Endings). The Kilmarnock trio released their debut album, the 4K-rated Blackened Sky, in March 2002, and set about slowly and steadily securing a reputation as one of the UK’s most idiosyncratic, imaginative and charming cult concerns. Before the decade was out, the trio – frontman Simon Neil and twins James and Ben Johnston – would have a Number One single under their belts, albeit with a song loaned to a TV talent show singer. This would only be the beginning of their rise and rise.

But if Biffy seemed like unlikely future superstars, to most of their peers at Camber Sands and to the industry beyond, The Darkness seemed like nothing less than a parody act. Fronted by the shameless, catsuit-clad Justin Hawkins alongside his younger brother Dan, the Lowestoft quartet borrowed a sense of theatre from Queen and a little ‘fuck you’ attitude from AC/DC, and shared with Muse a firm belief that ridicule was nothing to be scared of. Which was just as well, really, because they would receive a lot of it. “The business as a whole thought they were uncool,” one major label A&R man admitted. “In fact, people were saying that they were a joke and that they weren't real.”

Soon enough, The Darkness would throw every mocking comment back into the faces of their detractors. Their debut album, Permission To Land, would sell 1.5 million copies in the UK alone, and the quartet would strut away from the 2004 Brit Awards clutching trophies for Best Group, Best Rock Group and Best Album. Such phenomenal success couldn’t last forever, but for a time, alongside the stadium-bound Muse, they made every British kid with a guitar in a suburban garage believe that absolutely anything was possible. As nu-metal peaked, a legion of British bands were ready to take rock music to the next level.