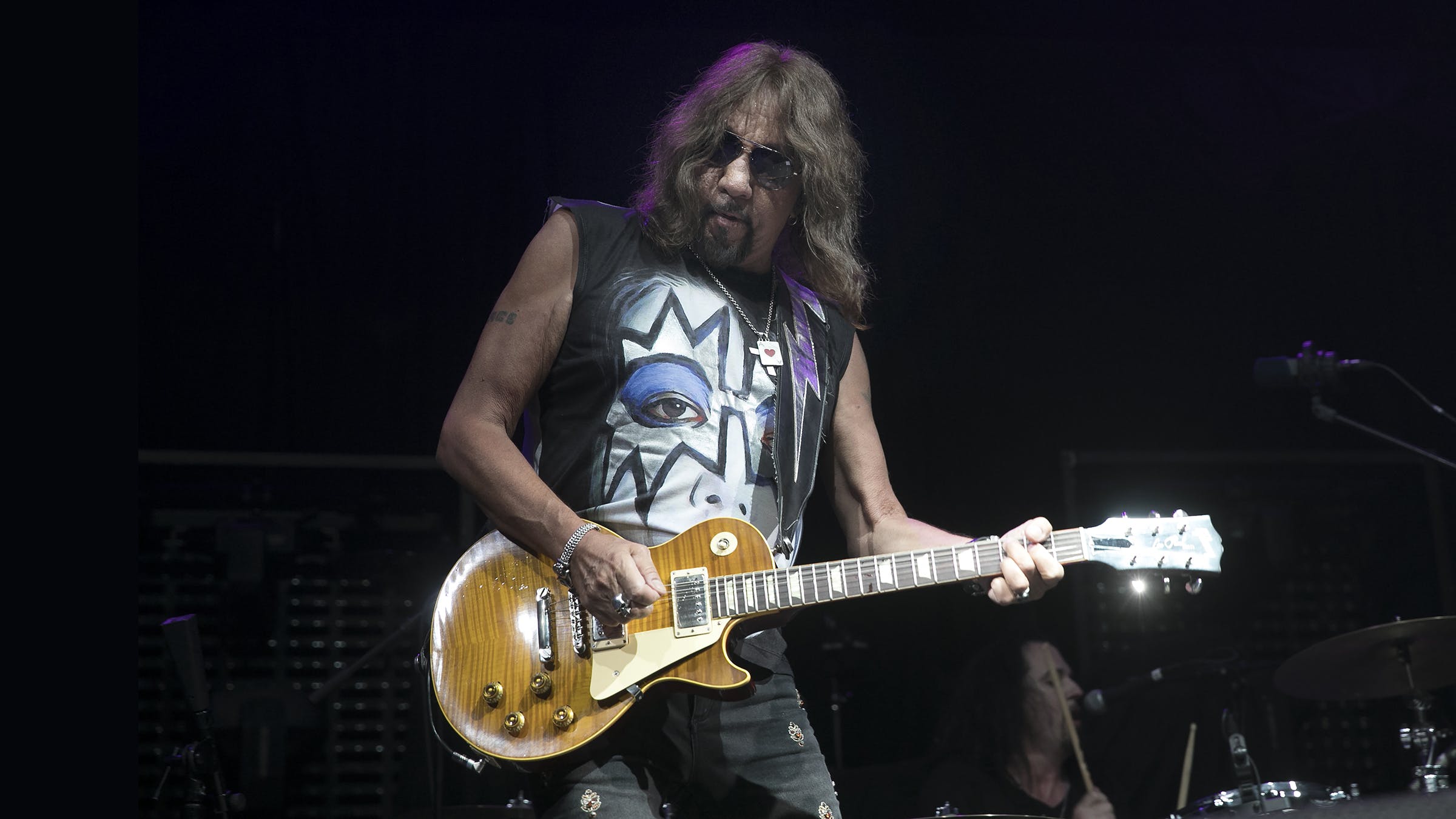 In 1978, when I was just a boy, one of my friends hosted a birthday celebration in our townhouse community. While most of the day escapes me, one moment stands out despite the decades: my friend opened a present to reveal KISS lead guitarist Ace Frehley’s debut solo album. It seemed to glow like a mystical relic in the living room. We put on the record and were promptly floored by the first track, Rip It Out.

My birthday was days later. I did not get the album. But I did get the memory – and many others – of Ace Frehley. “That is a special album – it just has that spark,” Ace tells me decades later at his hotel room in Berkeley, California, on the second night of a club tour in advance of his upcoming solo album, Spaceman, due out October 19.

The mythical being pictured on my record player and depicted as a hero in my comic books is now sitting across from me. He’s heard from thousands of fans about that record – especially in comparison to his former bandmates' costly solo indulgences. “A lot of guitar players were affected by that album,” he says. “It's sort of like the guitar player’s bible, and lots of people tell me that it was that record or Alive that led them to pick up a record. It spawned thousands of guitar players.”

Ace has seen a lot during his six-plus decades on Earth – much of that as a touring musician and a celebrity. During his rise to fame with KISS, the world was much different: omnipotent labels and superstar producers were the norm; so were eight-track tapes, trashed hotel rooms, and double live albums with elaborate gatefolds. In the ’80s, after leaving KISS, he created a sizable following with his band Frehley’s Comet. In the ’90s, Ace continued his solo career and eventually reunited with the band that made him a household name. The Internet upended music in the 21st century, and Ace’s beloved New York has changed, too: from a hardscrabble metropolis to an increasingly expensive and gentrified town with little grit.

What has not changed in the half-century of a musical life is that Ace still seems different, unbearably authentic. What sets Ace apart from his bandmates – particularly Gene Simmons and Paul Stanley -- is that despite his guitar heroics, he never took himself seriously. As the makeshift KISS lineup continues to play large venues, and Stanley weighs in on the NFL’s national anthem controversy, Ace is comfortable returning to theatres. Smaller clubs feel like home. “When a gig goes great – and usually they do – Ace is just pleased,” says his tour manager and long-time friend, John Ostrosky. “I think Ace is in a great spot right now.”

“It’s more intimate,” Ace says of the club gigs. “When you play stadiums, you have these barriers with guards, and you can’t even touch the fans. You make more money in stadiums. But it's a tradeoff because there is no intimacy. We played a great theatre last night to 1,000 people. I'm not making millions of dollars doing this. But I’m having fun.”

Ace, now in his late 60s, has settled down. The binges and parties are memories, most of them told in his warts-and-all biography, No Regrets. At the same time, it's easy for Ace to lapse into talking about his history. When he asks me where I grew up and I tell him outside of Washington, D.C., he spins a tale of a city cop he befriended in the 1980s at a show. They became drinking buddies and the officer eventually joined the Secret Service. Ace later joined him to shoot off some rounds at a Secret Service training grounds.

The antics have also passed. Ace has been sober almost 12 years and travels with his fiancée Rachael. Off the stage it’s uneventful life on the road, more about Netflix than hitting bars. “In the partying days I just never got my rest,” he laments. “I would wake up cranky, and I wasn't 100 percent for the audience. Now, I pretty much lay in bed all day, order room service, and save my energy for the gig.”

Ace also remains active as a songwriter and producer. In addition to an ambitious tour schedule both in the states and abroad, he continues to write. Spaceman, which will surface 40 years after his famed solo record, will feature two songs co-written by Simmons and two songs featuring famed drummer Anton Fig, a frequent Ace collaborator. Following the release of the single Bronx Boy in April, Ace has at last debuted a follow-up, Rockin' With The Boys, originally written in the ’70s during KISS’s heyday.

Ace is superstitious about the album and hopes that the exact 40-year gap from his first solo release and the fact that both albums contain nine songs bodes well. "The people that have heard it tell me it’s one of the best things I’ve ever done,” he says.

Ace is telling me what solo he thinks he will be remembered for (it might be Parasite) when a gigantic bodyguard shows up. The show starts in about 20 minutes, he reports. Ace’s famous laughter, perhaps first heard in his legendary appearance on The Tomorrow Show With Tom Snyder in 1979, lights up the room. “Look at the size of this guy!” Ace says. That laugh is nearly as unforgettable as his playing.

About 20 minutes later, Ace is onstage at the Cornerstone Brewery playing that solo to a packed crowd, many who have grown old with Ace. He stomps through New York Groove (which has become a baseball anthem) and tips his hat to KISS hits like Love Gun. Seeing Ace Frehley on stage offers generations a portal to their childhood and a reminder of a time when musicians were larger-than-life giants -- a simpler time, when illusion and reality mingled with ease (and not in the “fake news” sense), when you couldn’t yet watch your favorite musician walk his or her dog on YouTube. Ace Frehley is one of the singular gifts of that simpler time. Like Marvel’s famous character Norrin Radd, the Silver Surfer, he seems to exist beyond time, yet remains on Earth. His solos and songs -- his superpowers, if you will -- have attained cosmic significance. For many, he remains a precious link to growing up, yet a present reminder of the things that make a life worthwhile.

Ace Frehley, a working man’s guitar player, yet a creature of a larger universe, is eternal.