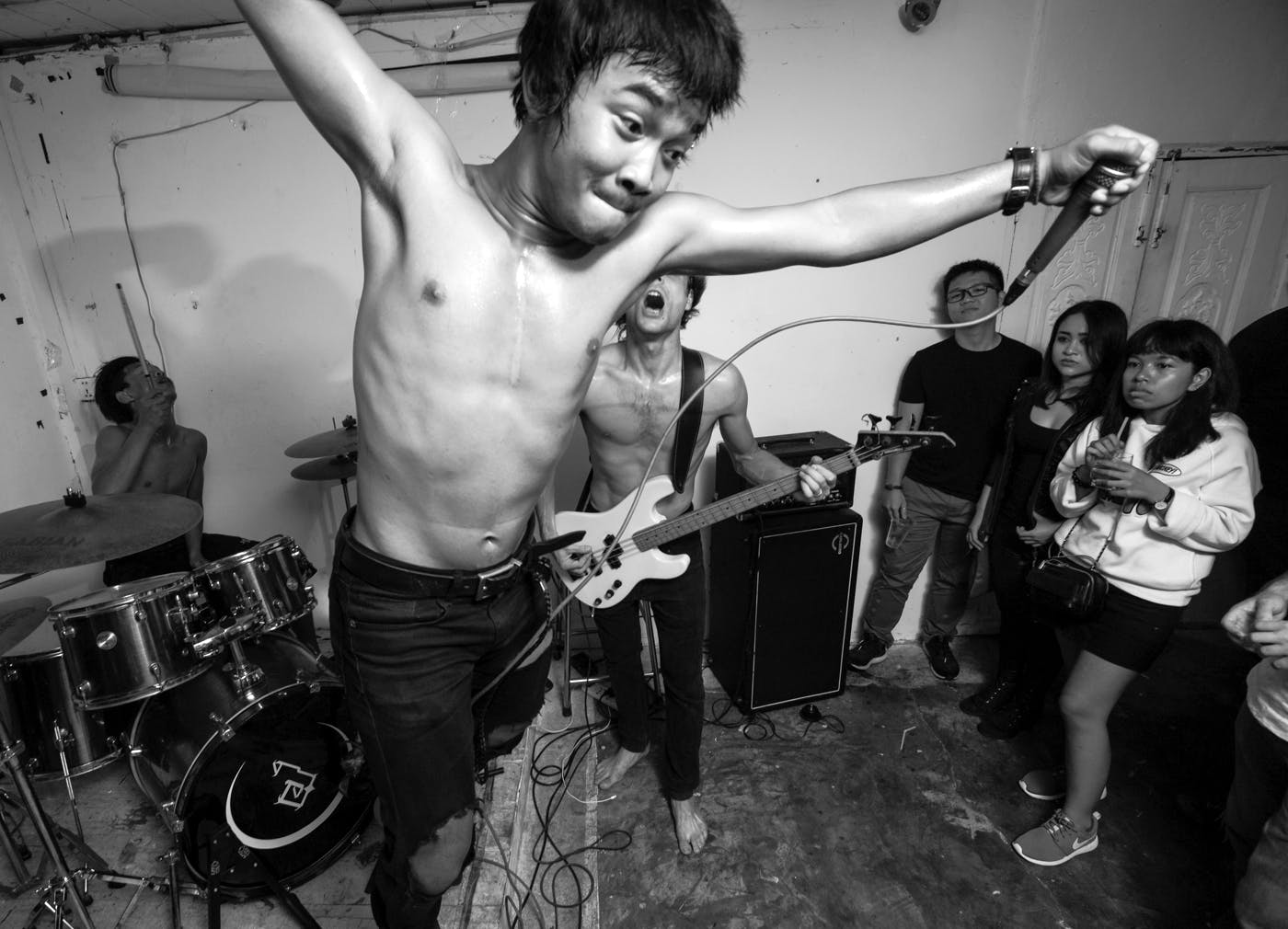 In order to fully understand and appreciate Cambodia’s new rock scene, it’s necessary to understand a little of the country’s war-torn and poverty-stricken history. Through genocides, civil wars, foreign occupations, uprisings, corruption, disease and poverty, the resilient and proud Khmer people have managed to survive and rebuild Cambodia. Following the Cambodian genocide, in which three million were killed by their own government between 1975 and ’79, 68 per cent of the population are now under 30 years old. The horrors in the country over the past century quashed any potential for an alternative music scene.

A beautiful yet brief Khmer psychedelic rock scene blossomed from 1967 to 1970 during the Vietnam War, but there has been nothing since, leaving Cambodia a cultural and quite literal ‘scorched earth’, for many years. Since 1985 they’ve had the same prime minister, Hun Sen, running the country and he is now the longest-serving head of government in the world. Through corruption, violence and simply refusing to step down, his position appears safe, for now.

From the ashes of the country’s dark past, a rock and metal scene has unexpectedly appeared. Raw and raging bands like Sliten6ix, Doch Chkae and Nightmare A.D., alongside Yab Moung Records - the only alternative record label in Cambodia - are changing the country's cultural landscape.

As there has never been a rock scene in Cambodia, the young bands have no direct musical influences. However, this doesn’t seem to be holding them back.

“I think television and the internet have helped in pointing me to metal and hardcore music,” says Vantinn Hoern, the singer from Sliten6ix, naming Converge, Darkthrone, Full Of Hell, Electric Wizard and Slipknot as bands he takes inspiration from via YouTube. “But it doesn’t have to be metal, hardcore or punk. Broaden your horizons!”

Sliten6ix were the first ever Cambodian metal band and they started in Phnom Penh back in 2011. They’ve released two EPs and have gigged in the country profusely over the past five years. They used to have a metal song about Pol Pot. “I wrote that song because of my mother,” says Vanntin. “She told me of her near-death experiences during the Khmer Rouge.”

Their latest release, Hiraeth is a dark and aggressive record, combining black metal with hardcore, and laden with blastbeats and a Southeast Asian anger.

Punk poet, Myles Rattle, moved to Pnom Penh from Australia in 2012 and opened a rock bar called Show Box. We spoke to him on the phone at his new home in Qatar.

“When I got to Cambodia there was no support for the Khmer bands at all, they wouldn’t even get paid for gigs but expat cover bands would,” he explained. “To help the scene, I had a Khmer price and a Western price for booze so I could encourage the people in the bands and the local punks to drink in the bar. They just didn’t have the money to hang out at bars usually.”

He got to know the local punks and together with Sliten6ix and Anti-Fate (Cambodia’s first punk band), started Yab Moung Records. The name ‘Yab Moung’ is an expletive meaning ‘pain in the arse’ in Khmer. In the early days of the label they toured the east coast of the country, picking up fans among the expat communities and locals.

“All the money goes to the bands, we didn’t start the label to make money. We release everything online. You can’t make a living in Cambodia being in an alternative band. Well, nobody has done it yet…”

Poverty is a hurdle for Khmer people pursuing music, and many face pressure from their families to start working from an early age. Myles explained that young people often have to financially help their parents and grandparents, as well as themselves. However, thanks to programs and NGO’s like MAP Cambodia, homeless and poor young people can get involved in music more easily.

Theara Ouch from Doch Chkae explained that all the band members are orphans and came together through an NGO.

“I found out about the music after my friend showed me Rage Against The Machine and Slipknot on YouTube,” he explained to me. “The three of us in the band have had the same difficult, hard life. All three of us don’t have a mother or father, but we all like the same music.”

Doch Chkae have been together for three years and are the first and only Khmer death metal band. Their fiery adolescence can be heard in their snarling, hostile debut song Kam Knea Doch Chkae.

In a short film made about them, Theara describes having a “dogs life” as he and his band mates worked as ‘waste-pickers’, scavenging for food when growing up. This, he explains, is why they chose the name Doch Chkae, which means ‘dog’ in Khmer. A lot of children were displaced after the wars and genocide in the country. The country boasts more than 500 orphanages now, but research shows that there are alarming levels of corruption and exploitation taking place within them. This is mainly due to the entrenched poverty in the country, along with Western demand to adopt children, ‘voluntourism’ and blind donations.

The corruption has been identified in the form of the orphanage workers siphoning off donations for themselves, while starving the children and keeping them in squalid conditions. It has also been reported in the form of sexual, domestic and labour trafficking.

Speaking to The Guardian, Unicef’s Cambodian communications chief Iman Morooka was quoted saying, “We see orphanages that have become tourist attractions and in many cases there is no rigorous background check of those given access to the facility. This puts children at risk of exploitation and sexual abuse.”

Child sex tourism and human trafficking are problems in Cambodia with the country being registered on the ‘Tier 2 Watchlist' of America’s Trafficking and Victims Protection Act. It is widely recognised as a hotspot for child sexual exploitation, along with countries like Mexico and Thailand, and it is estimated that a third of all prostitutes in Cambodia are under the age of 16.

“When I scream in my band I want to tell people about our hard lives,” says Theara. “When we were kids we had no food, no home and nowhere to sleep. When I sing about it, I no longer have the stress in my heart.”

Sochetra Vartey is the label manager at Yab Moung, but also plays in a band herself, under the name Vartey Ganiva. Her song Evil Husband is an empowering feminist anthem against oppression, a message that is especially important in Cambodia where prostitution is the only option to escape poverty for many women. The record label describes it as “a punk-hearted lamentation directed to the abusive fuckmen that just can't hang".

However, Vartey isn’t the only woman in the country using her music to fight oppression. Mia Priest is a transgender woman that sings in a thrash metal band called Nightmare A.D..

“Coming from an anarchistic standpoint, I’m really against fascism, tyranny and dictatorships,” she says.

“The government we have here is pretty fascist and the opposition is really right-wing too, so it’s a lose-lose situation for Cambodia.”

Mia explains how people can’t be too overtly political in public or engage in protests, describing the government’s recent decision to close several new channels and radio stations as an attempt to “shut people up”.

Life is difficult for transgender Khmer people because it is a traditional country and they are “looked down on by the locals”, according to Mia. As an expat, originally from Singapore, she doesn’t suffer quite the same discrimination that others do, but that is not to say to she has had an easy life.

“My journey has been hellish. I’ve tried to kill myself a few times and I suffered abuse when I was younger. My life has not been very… flowery,” she explains.

In all the conversations we had with the rockers in Cambodia, they all shared the same hope that as the scene grows, more Khmer people will find their voice through music. What it lacks in the number of bands and fans, it gains in its rawness and intimacy.

After spending months talking with the handful of people that make up the scene, what came through most is that they were all essentially fighting for freedom. Fighting to be free from their history, free from their government, free to be who they want to be. However, unlike the conflicts of the past, in this fight they aren’t armed with weapons - they are armed with microphones and instruments.

Keep up to date with all things Yab Moung here.