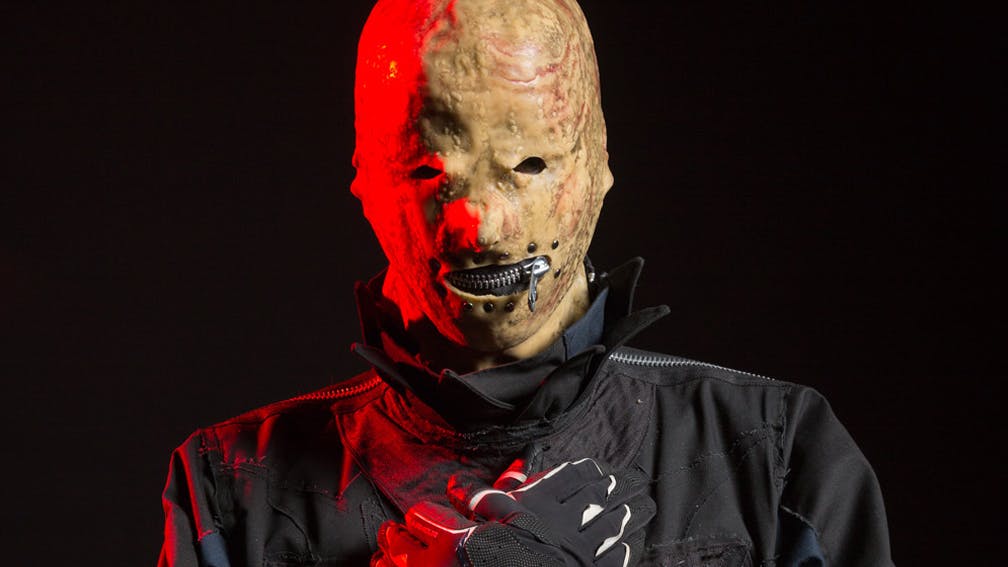 Since Slipknot's epic return a week ago with incredible single Unsainted and news of their new album We Are Not Your Kind, Maggots across the world have been wondering who the mysterious ninth member of the band is.

Having parted ways with percussionist Chris Fehn back in March, no-one was to know if, going into the cycle for album number six, Slipknot would simply leave Chris' position unfilled or find a replacement to keep up with their traditional line-up of nine members. As we've all seen now, though, the ’Knot have chosen to do the latter – but they simply won't let on who it is.

Last week, when Kerrang! joined Slipknot in Las Vegas for a world-exclusive interview with Corey Taylor and Shawn 'Clown' Crahan, we decided to ask the Iowa titans if they cared to give away this masked percussionist's identity, to which we were met with a rather emphatic "no".

“The position you may or may not be talking about is nobody’s fucking business,” Clown responded, before emphasising that it’ll be up to the fans to make up their own minds once they catch Slipknot performing live across the world this year: “The proof is in the pudding.”

As we've already seen from the live debut of Unsainted and standalone single All Out Life on Jimmy Kimmel last Friday… well, it looks like things are in very good hands indeed.

Pick up this week's issue of Kerrang! from our online store and get it delivered straight to your door, anywhere in the world.

Please note: these interviews were conducted and sent to print before the tragic news of the passing of Gabrielle Crahan – Shawn ‘Clown’ Crahan’s 22-year-old daughter – on Saturday, May 18. Everyone at Kerrang! would like to send their love to the Crahan family and all who knew Gabrielle at this devastating time. RIP.