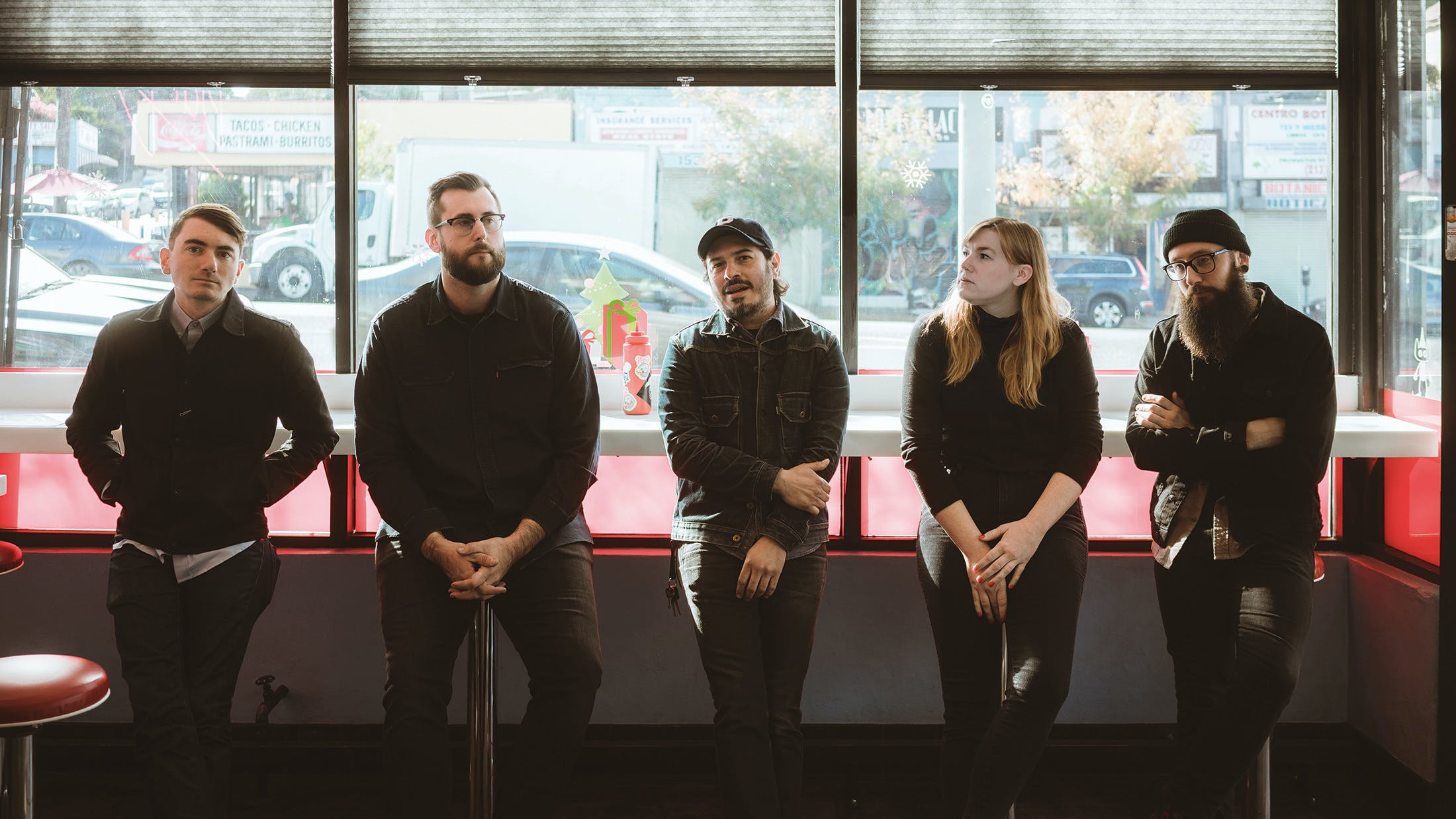 Dylan Slocum is quoting Samuel Beckett and contemplating Armageddon. Neither of these things will come as a huge surprise to diehard fans of his band, Spanish Love Songs. The uninitiated, too, will soon learn that this is just the kind of guy he is.

The LA transplant is currently “home” in Iowa, living in the basement of his bandmate and partner Meredith Van Woert’s parents’ house, hopefully before a permanent move to Pittsburgh. Only 'hopefully' for now, depending on the reaction to their latest album Brave Faces Everyone. There’s also, of course, the distinct possibility that someone somewhere gets an itchy trigger finger and presses the big red button, bringing the world to an untimely and abrupt end…

“There’s a line in [tragi-comic Beckett play] Waiting For Godot,” Dylan begins, chuckling as he does, “and it goes: ‘Let us not then speak ill of our generation, it is not any unhappier than its predecessors,’ and I really feel that. I think that basically every time before now has been just as awful as the time we’re living in. Every generation has felt like the world is ending, but at the same time, this feels worse. You can’t escape the feeling that maybe this is it for us.”

If it sounds like the Spanish Love Songs vocalist and guitarist must be a riot at parties, rest assured he also does a fine line in self-deprecation, acutely aware of the absurdity of talking about this high-minded stuff in relation to some über-personal, super earnest, blue-collar punk rock songs. Even if those songs are often rooted in all-too relatable misery and despair, there’s a spirit of defiance and fight in their hearts. The very real and rising threat of climate change may be exacerbating the same old end-of-days concerns that plagued previous generations, but Dylan isn’t so sure he subscribes to an entirely fatalistic, all-hope-is-gone outlook. ‘On any given day, I’m a 6/10’ he sings on the first line of opening track Routine Pain – a nod and tribute to a sentiment expressed by late Frightened Rabbit frontman Scott Hutchison in his last interview, shortly before he took his own life in the spring of 2018 following a long battle with depression.

“I’ve realised that everybody is basically miserable everywhere. That’s the default standard,” Dylan explains of the tone he wanted to set from the off on these songs. “I joke about being a 6/10, but a lot of people I know are that or worse every day. And so that definitely played into the development of the album. Six to me is pretty great. It’s funny how that little joke is my life now, though – that’s my worldview.”

Increasingly, this worldview is one being shared by many, as the band – completed by guitarist Kyle McAulay, bassist Trevor Dietrich, and drummer Ruben Duarte dovetailing Meredith’s keys and Dylan’s frontman duties – continue to rapidly pick up new converts to their realist cause, having broken through with rafts of similarly-minded sensitive souls on 2018’s Schmaltz, prompting their signing to Pure Noise. Not that the singer had any idea that that’s what he’d be getting himself into.

“We didn’t realise that this would be our appeal,” he insists, “but what we’ve learned is that we’re helping people not feel alone. We have people share the most intensely personal stories with us, because they’ve responded to something in our songs. It’s truly a blessing.”

For years, Dylan tried to run away from this talent for helping people. He refers to pursuing Spanish Love Songs as a “dumb” move and repeatedly calls himself an “idiot” for picking up a guitar and singing songs for a living. Again, anyone familiar with his lyrics will know that beating himself up appears to be his favourite sport, but he’s tried not playing music before and failed. Like it or not, this is who he is and the compulsion doesn’t look likely to leave him any time soon. After finishing his studies at film school, he broke up his old band and instead tried his hand at freelancing as a director’s assistant in Hollywood (he even has his own IMDB page). He also worked for a board game design company. Then he tutored spoiled rich kids through their SATs, most memorably the son of the (American football team) Detroit Pistons’ owner. It was a grubby insight into a world at odds with his core values, however.

“He was like, the one per cent of the one per cent,” he scoffs. “They had a servant’s house on their property. He was an asshole billionaire, but we know where we stand on those people. It’s weird seeing a child grow up in that environment. If the world’s not beating you down constantly, I basically don’t trust you (laughs)!”

Other than Meredith, all of Spanish Love Songs are in their thirties now, so they’ve lived some life, and they know who and what they are. “At our age, if we put out a bad album, we’re done,” Dylan acknowledges of the unforgiving nature of the music industry. It’s an attitude that comes through in their bruised but big-hearted songs, filled with humanity yet also with subject matter hewn from life’s darker edges, encompassing themes of mental health, poverty, medication and ennui. Schmaltz was Dylan’s almost reluctant “last shot at this”, but when that roll of the dice paid off, it made making Brave Faces Everyone an intense experience fraught with a fresh sense of pressure. Suddenly the band had the support of a newly expectant record label behind them, alongside a growing legion of fans. Last September, then, following Dylan’s three-week long summer writing sessions in Iowa, they borrowed serial GRAMMY-nominated producer Howard Benson’s studio, West Valley Recording – a favour to Trevor, who used to work there – where platinum records by Kelly Clarkson and My Chemical Romance’s Three Cheers For Sweet Revenge glowered down at them from the surrounding walls. Dylan only wrote 14 songs, but discarded hundreds of ideas (“sometimes you’ve got to recognise a turd when it comes along, which is most of them!”). The resultant 10 represent his and the band’s best efforts – take ‘em or leave ‘em.

“We started this band with zero expectations, and we’ve kind of stumbled into things,” he stoically accepts. “We are not owed anything cool or anything good. So anything good that happens is truly amazing.

“But we’re all overachieving students,” he adds. “Every single person in our band is like a good student who just wants to please the teacher. And our fans are the teachers now, so we don’t want to let them down.”

Despite that will to please, Dylan isn’t getting his hopes up too high. Like any truly damaged individual, he instead prefers to continue expecting the worst so that he can only be pleasantly surprised.

“If people hate it, then we finally won’t ever have to do this again,” he says, only half-jokingly. “That’s kind of liberating. I truly think we’re a good band, but I also would not be surprised if people didn’t like us. I expect everybody to hate everything. Because as much as I try to fight it, that’s my default mode.”

It’s hard to imagine a world where Brave Faces Everyone does anything but build on the band’s momentum, however. These are, after all, comforting songs perfect for the uncertain times we’re all living through. There’s no judgement in the observations of their protagonists’ weaknesses. There’s compassion and a plea for empathy, to be better, and maybe even some hope by the time that titular closer sends it home.

“I understand this desire to numb out the pain entirely, because the world is scary and it’s getting scarier,” Dylan says. “These songs understand that. So let’s talk about why we do these things. By the end it’s basically saying that nothing is wrong with you. Life is hard, but that’s where I think the positivity comes from. People still laugh when I call this a positive album, but honestly, I am an optimist.”

Hey, maybe it will soon be the end of the world as we know it, but despite how it might seem, Spanish Love Songs feel fine.