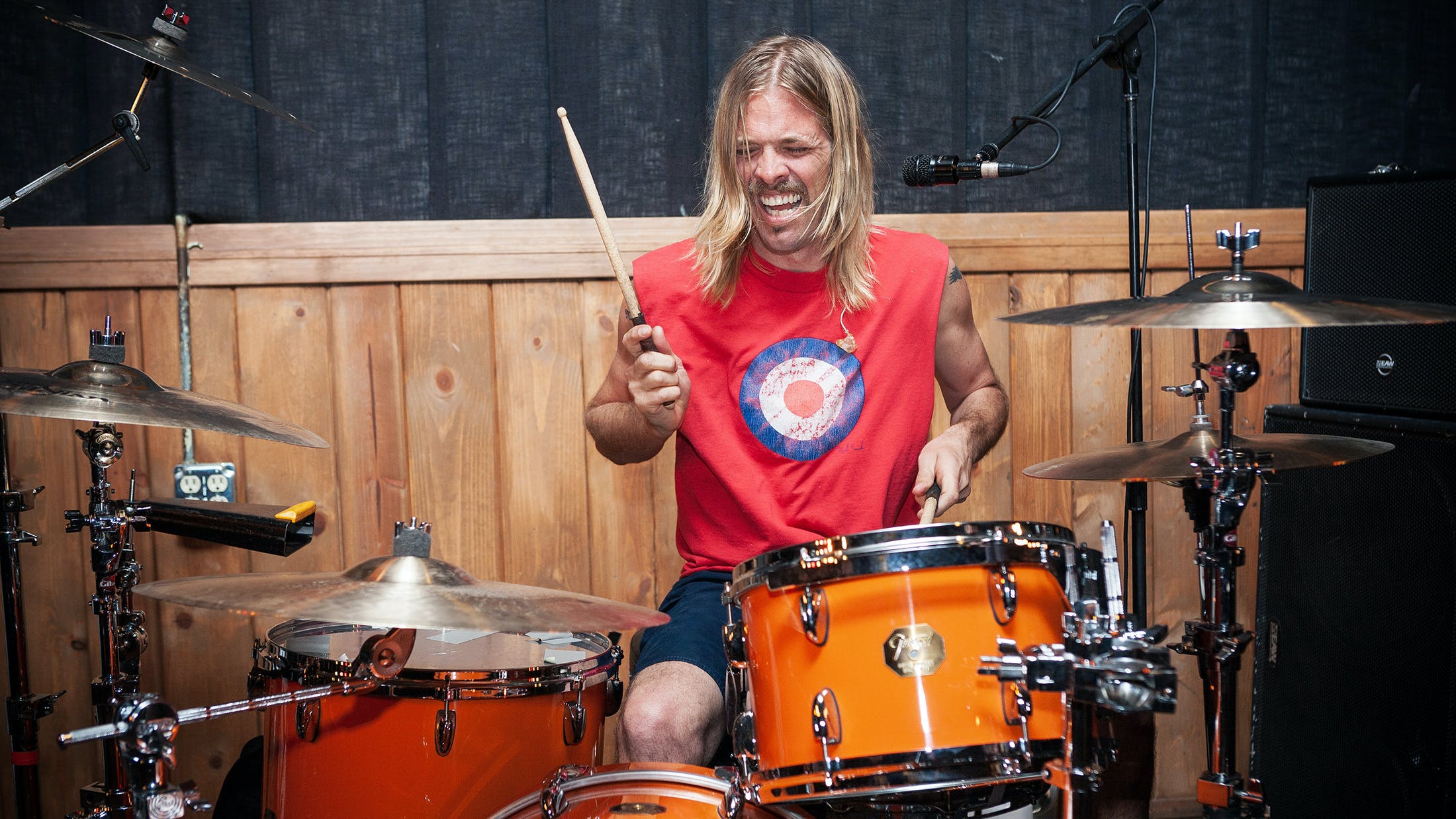 Taylor Hawkins once told Kerrang!, when asked for any clues on Foo Fighters next move: “I dunno, man. Nobody ever tells me anything. I’m just the drummer.”

To anyone who’d ever seen him play, that final sentence was a nonsense. We told him so. He shrugged and said it was just what he did. All he did, in fact, besides mountain biking. “Just” the drummer. In a band with two of the best in the world in its line-up, he was actually the best; not simply a movement of hands and feet at the back of the stage giving the other players a two and a four to which to count, but a massive heart hammering out an explosive, irresistible, vital, urgent beat.

When he got going, it was entirely believable that he might not actually be able to stop. In a proximity close enough to feel the heat coming off him, what he did behind a kit was more like watching an athlete than a musician. Though his chops and technique were the sort most musicians could only dream of, that was all overshadowed by the sheer physical, deeply instinctual graft and sweat. Guy couldn’t tell you what he was doing half the time, but fucking hell could he show you.

In Foo Fighters, this untamed, primal energy led to a glorious firework of a dynamic. The old line is that a level of conflict and tension between band members is what makes great bands, the sparks from two personalities rubbing against one another being the gold. Between Taylor and Dave Grohl, it was entirely the opposite – two similarly excited characters with huge personalities, both buzzing on the same wavelength, absolutely welded together, egging each other on to greater heights.

As the world learned of his passing this morning at the age of just 50, loving tributes and heartbroken words from his friends, fans and other musicians are shared, among so many stories and memories and I-was-there moments have flooded forth, and will continue for a long time. A musical hero, an icon, and one of the most electrifying rockstars of his generation, there is a stunned disbelief that such a blindingly bright fire can disappear so suddenly.

“Just” the drummer. How wrong.

When Taylor Hawkins was 10 years old, in September 1982, he went to see Queen play at Irvine Meadows Amphitheatre in California. Having picked up a pair of drumsticks a few months earlier, that band’s drummer, Roger Taylor, was already a hero. Watching him hammer out We Will Rock You, Bohemian Rhapsody and Tie Your Mother Down, the young Taylor had an awakening. Literally.

“After that concert, I don’t think I slept for three days,” he told Kerrang! years later. “It changed everything, and I was never the same because of it. It was the beginning of my obsession with rock’n’roll, and I knew that I wanted to be in a huge rock band after seeing Queen. I was just starting to get into the drums, and Roger Taylor became my hero. I remember telling my mom that I’d play there one day.”

Just as the time had been an age of larger-than-life guitar heroes, Taylor’s young percussion education took place in an era where the player sat at the back could, if they had the personality for it, become an icon too. Like his heroes Roger Taylor, Alex Van Halen, Rush genius Neil Peart, John Bonham from Led Zeppelin and The Police sticksman Stewart Copeland, from the get-go Taylor saw the drums as a lead instrument, where technical nous and OTT flare made the kit the most exciting thing on the stage.

His first proper gigs came in the early ‘90s, playing with arty rockers Sylvia, and Canadian singer Sass Jordan on a European tour opening for Aerosmith. In 1995, his big break came when, after Jagged Little Pill made her a superstar in 1995, Alanis Morissette recruited him for her touring band. It was turbo.

“[Things] just went fucking nuclear,” he recalled. “Next thing you know, I’m in a video that’s on MTV every hour. That tour was very special, and I owe her a lot of gratitude. She gave me a lot of space to do what I wanted.”

As the tour ended and Alanis began work on a more mellow follow-up, Taylor got wind that Foo Fighters were looking for a new drummer. Things were such that Dave Grohl had actually ended up recording the parts for The Colour And The Shape himself.

It would be the start of one of the greatest partnerships in rock history. Though he admitted that being under the microscope from having a leader who’s also a drummer wasn’t always the easiest gig, the two personalities complemented one another so well that Taylor and Dave quickly became a visible anchor together. In the unlikely scenario where a man as excitable and enthusiastic as Dave Grohl is the straight man in the setup, Taylor was his hyper little brother. Together, they forged an amusing double-act offstage, a devastating combination of musical brains and dynamite power on it.

In person, it didn’t take long to understand why Taylor was the drummer he was. Though in possession of a laid-back, beachy, don’t worry about it, California vibe, he was also a man with ants in his pants. Energy hummed off him. In Foos videos, he was frequently the centre of the lolz, mugging for the camera even more than Dave. When he went to work on the drumstool, it was almost like he was flaring off what was oscillating through him, actually giving it a purpose. Unloaded into the framework of a Foos song, the focusing of such raw power could have put a dent in the Moon.

For all this, he had a reservedness about his own abilities. “I put a big burden on myself to play perfectly – whatever that means – and keep in perfect time,” he once told K!. “We’re not one of those bands who are hooked up to a computer or play to backing tracks. We have no safety net, and what happens is what happens. If it’s a trainwreck, it’s a fucking trainwreck. We live and die by the great sword of rock’n’roll. You’re getting something real: you’re getting blood, you’re getting guts, you’re getting a human exchange, and we’re actually really feeding off the audience and the excitement.”

As the band grew into one of America’s biggest, so did a period of partying. In 2001, this excessive time came to a head when Taylor ended up in hospital through taking “a lot of fucking drugs”, as he put it. “I believed the bullshit myth of live hard and fast, die young. I’m not here to preach about not doing drugs, because I loved doing drugs, but I just got out of control for a while and it almost got me.”

Following this, though, the years that followed would see him finding excitement in mountain biking. And even more drumming. And that energy, big smile, crackling eyes and sharp humour only increased.

Even not in Foos, time away from the kit was time wasted. He had his own jam band, Taylor Hawkins And The Coattail Riders (on whose Red Light Fever album guests included Roger Taylor and Brian May), as well as newer outfit NHC with Jane’s Addiction guitarist Dave Navarro and bassist Chris Chaney, in which he indulged his love of “yacht rock”. He'd recently been working with Ozzy Osbourne on his upcoming solo album. When, in 2007, Coheed And Cambria found themselves between drummers for their No World For Tomorrow album, it was he who performed on the record. That band’s tribute thanked him for this, for “giving us a lift when we were at our lowest point”.

He played in metal jam band Chevy Metal, with whom other music luminaries would do a turn, like Twisted Sister’s Dee Snider joining him for a blast through Queen’s Tie Your Mother Down. He’d just hang out and play drums with Stewart Copeland. As well as dream fulfilment, having Jimmy Page and Jon Paul Jones from Led Zeppelin join Foos onstage at Wembley Stadium, or Roger Taylor and Brian May at Hyde Park, was simply another excuse to whack a drum. Even on his own, that was fine, so long as he could play somewhere.

“I remember Taylor showing up to a Foos show in Europe somewhere, about 8 hours early, just so he could pound the shit out of his drums out the back,” said Biffy Clyro/Oceansize guitarist Mike Vennart on Twitter this morning. “All on his own, just fucking going for it.”

The loss of Taylor Hawkins is incredibly sad. 50 is no age. He had a wife and children. And what is there to say? Perhaps, really, that a life cut so tragically short was one that brought such joy to literally millions of music fans.

The love that has poured out for him has been very real, and very touching. He leaves a deafening silence where one his very presence filled the air around him with energy and life and love and fun and a vital intensity. But a man so outsized in talent and personality can never be forgotten.