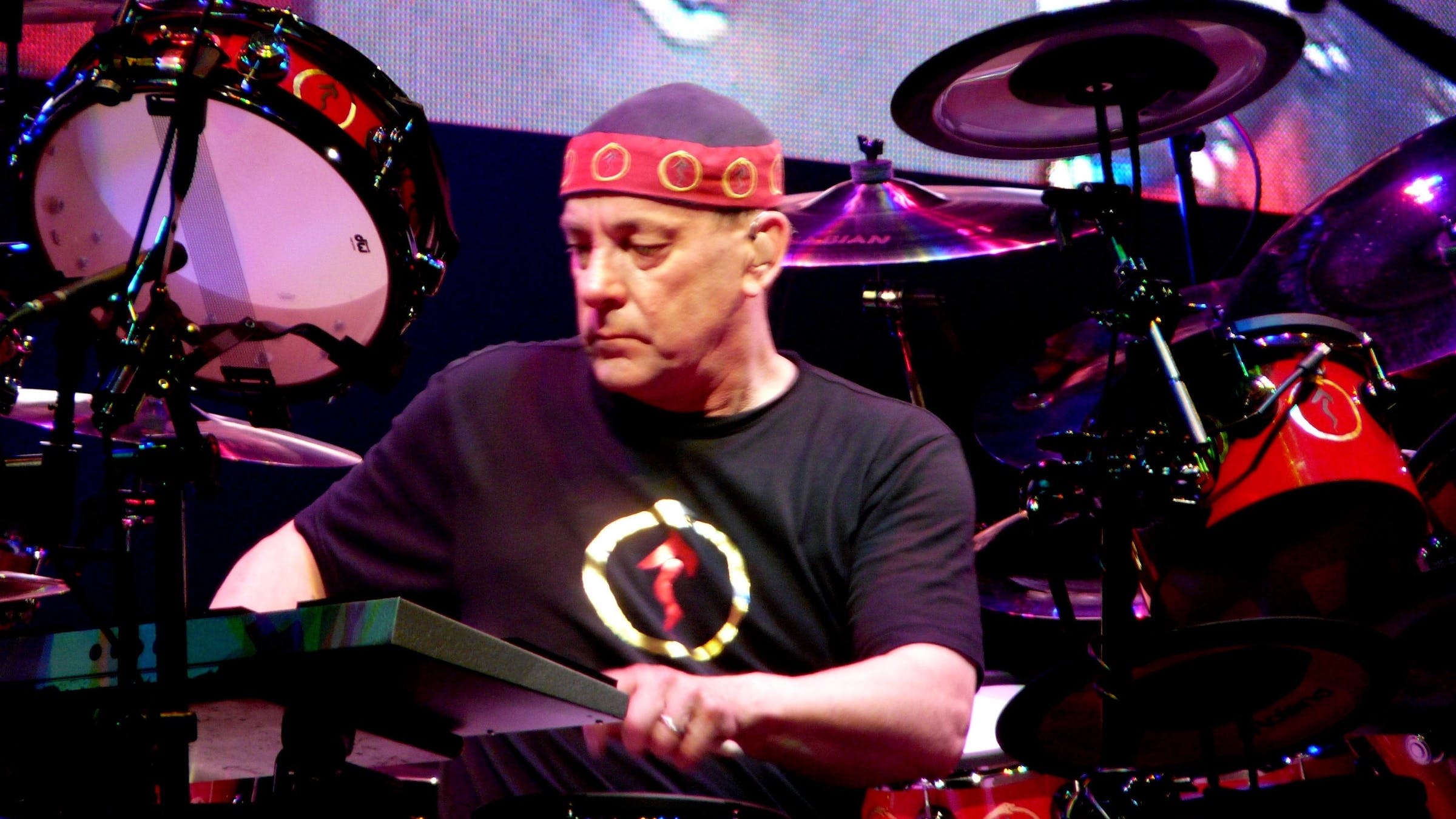 Rush played their final concert on August 1, 2015 at the ‘Fabulous’ Forum in the Los Angeles suburb of Inglewood. Over the years, this grand old arena has witnessed its share of genuinely legendary talents: from John Bonham of Led Zeppelin and Keith Moon of The Who in music, to sports stars such as the basketball player Earvin ‘Magic’ Johnson and the ice hockey superstar Wayne Gretzky.

The final public performance of Rush, and of their drummer Neil Peart, was as significant an occasion as any in the Forum’s then 48-year history. That night, in the ninth row sat four fellow drummers watching Peart’s peerless playing for the last time. Enjoying their one-night busman’s holiday were Taylor Hawkins from the Foo Fighters, Tool’s Danny Carey, Jon Theodore of Queens Of The Stone Age, and the Red Hot Chili Peppers’ drummer Chad Smith.

“I spent my sophomore year of high school in the parking lot smoking weed and listening to [the Rush album] 2112,” Chad Smith said later to the writer Philip Wilding. “I do believe it’s a prerequisite for all rock drummers to go through a Neal Peart phase.”

When the news of the death of Neil Peart was announced by his erstwhile band mates Geddy Lee and Alex Lifeson, the world of rock music lost one of its finest, longest standing and most influential talents.

The statement read that "it is with broken hearts and the deepest sadness that we must announce the terrible news that on Tuesday [7th January] our friend, soul brother and band mate of over 45 years, Neil, has lost his incredibly brave three and a half year battle with brain cancer (Glioblastoma). We ask that friends, fans, and media alike understandably respect the family’s need for privacy and peace at this extremely painful and difficult time.

"Those wishing to express their condolences can choose a cancer research group or charity of their choice and a make a donation in Neil Peart’s name. Rest in peace brother. Neil Peart, September 12, 1952 – January 7, 2020."

Formed in the Toronto suburb of Willowdale in 1968, Rush have sold 40 million copies of their 19 studio and 11 live albums. In 2013 the trio were inducted into the Rock And Roll Hall Of Fame, in Cleveland, by Dave Grohl and Taylor Hawkins. Speaking about Peart, Hawkins said “this guy spawned a generation of air-drummers… with his composition, craft and technique.”

Neil Peart joined Rush in 1974, the point at which the Torontonians truly found their groove. Singer and bassist Geddy Lee remembered the day the two parties first met.

“He drove up in this little sports car, drums hanging out of every corner,” he told the journalist Michael Hann. “He comes in, this big goofy guy with a small drum kit with 18-inch bass drums. Alex [Lifeson] and I were chuckling – we thought he was a hick from the country. And then he sat down behind his kit and pummeled the drums, and us. I’d never heard a drummer like, someone with that power and dexterity. As far as I was concerned, he was hired from the minute he started playing.”

Peart’s first tour with Rush began just two weeks later, and heralded a decades long schedule that would see them performing as many as 250 concerts a year. Such a workload was crucial to the group’s development. Despite authoring a number of radio-friendly songs – of which The Spirit Of Radio, Tom Sawyer, Subdivisions and Closer To The Heart are the best known – Rush were not beloved of American or European radio. Along with Led Zeppelin, they were among the first bands to harvest an enormous audience by eschewing singles in favour of an arduous touring schedule. In this, they provided an influence on everyone from Slayer and pre-‘Black Album’ Metallica, to Mastodon, Tool, and Biffy Clyro.

Writing on social media, Biffy Clyro drummer Ben Johnston offered the words ‘RIP Neil. You inspired a generation and your legacy will forever remain ❤️❤️❤️.’ Beneath the words was a picture of Peart in bobble-head form.

Unusually for a rock band, as well as playing the drums Neil Peart also wrote his band’s lyrics. Featuring a sense of loneliness and dislocation – this was no bro-down rock star; Peart rarely gave interviews and traveled to shows alone on his motorcycle while on tour – his increasingly honest and searching lyrics offered an alternative to the get-down-get-dirty fare offered by bands such as Aerosmith and KISS. For a generation of rock lyricists unmoved by the traditional diet of girls and fast living, Peart was a pioneer.

On The Spirit Of Radio he wrote that “all this technology making modern music can still be open-hearted,” a battle cry that signalled his insistence that Rush’s music never stood still. Latterly inspired by artists such as The Cars and The Police, throughout the 1980s their sound shifted shapes in ways that differed wildly from the progressive hard rock they pioneered in the preceding decade. In taking this road less traveled, Rush proved that a group could retain its vast audience without pandering to it. To put it more simply – no Rush, no Tool.

Now that the final trumpet has sounded for Rush – and, tragically, for Neil Peart – the band’s legacy can be rightly considered in all its towering glory. As a musician, Peart was without peer, an influence on generations of players, some of whom we have heard, may of whom we have not. As a lyricist, he brought an element of humanity to the sometimes poisonously masculine world of rock music. And as one third of the collective vision of Rush, he played an irreplaceable role in a band who for decades proved incorruptible from all outside forces.

“Rush is just one of those bands that has a deep reservoir of rocket sauce,” Jack Black said on the documentary Rush: Beyond The Lighted Stage. “These guys were the real deal; their bottle was so big. They were shaking it for literally decades, and still there was sauce coming out.”