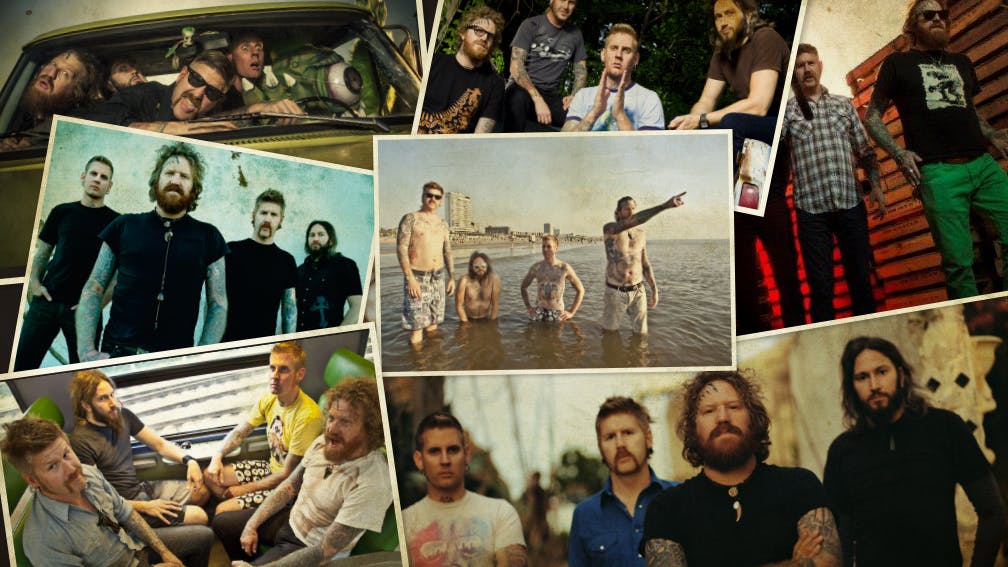 As one of the most vital heavy metal bands of today, Mastodon have had their fair share of legendary moments in their 18-year history. And the Atlanta prog/sludge shredders are about to notch one more achievement with the release of their limited edition Emperor Of Sand picture disc. Only 4,000 copies of the full colour 12” vinyl have been pressed for Record Store Day – and will surely be one of the most sought after releases on April 21. (Take it from Karl Groeger, Jr., co-owner of famed U.S. record store Looney Tunes, as we reported yesterday.)

So in honour of the occasion, we thought we should take a look back at the 10 greatest Mastodon moments of all time. Let’s revisit the following game-changing milestones throughout the band’s two-decade career:

It was nearly two decades ago that drummer Brann Dailor and guitarist Bill Kelliher moved from upstate New York to Atlanta, Georgia, and met bassist Troy Sanders and guitarist Brent Hinds at a High On Fire show in 1999. After seeing Brent play with his and Troy’s then-band, Four Hour Fogger, Bill invited the guitarist to come jam with him and Brann on January 13, 2000. But according to a 2009 interview with Spin, Bill claims that “Brent showed up so wasted he couldn’t even play… He was just playing one note turned up really loud. Brann and I were like, ‘Fuck this guy.’” But when Brent returned the next day, “He grabbed one of my guitars and was playing all this cool shit,” Bill says. Brent recruited Troy to play bass shortly after, and Mastodon’s line-up was solidified.

Though Mastodon’s debut full-length, Remission, was undoubtedly a force to be reckoned with, it was their sophomore effort, Leviathan, that truly put them on the map. Critics and fans alike would go gaga over this concept album (based loosely on Herman Melville’s epic American whale-chasing novel, Moby Dick), which, after its release on August 31, 2004, would give the band their first chart positions in both the U.S. and UK. Perhaps its greatest achievement, however, was its crowning of Album of the Year by Kerrang! Magazine. (Duh.)

February 21, 2006: Release of The Workhorse Chronicles

Mastodon’s first video release was also their last for Relapse Records (before their contract with Warner Brothers would begin). The epic (and we don’t use that word lightly) DVD includes a 45-minute documentary, a compilation of 28 live performances from 2000-2005, and three music videos (plus a behind-the-scenes short). Upon its release, the collection served both as a mind-blowing introduction to the band’s work thus far, and an indication to their hungry fans of what was to come. The Workhorse Chronicles made it clear that Mastodon were not fucking around.

Mastodon made its television debut by performing Colony Of Birchmen – the first single from their freshly minted album Blood Mountain – on Late Night with Conan O’Brien. After absolutely crushing the performance, the band triumphantly (and immediately) departed for Europe to open for Tool on tour. Sadly, video of the appearance is no longer available online, BUT IT LIVES ON IN OUR HEARTS.

A few real life bands have been immortalised as cartoons. Sure, there’s the Jackson Five and Korn; hell, Gorillaz even made a career out of it. But no animated rock band has ever performed an original song as simultaneously funny and badass as Mastodon’s opening number for Aqua Teen Hunger Force Colon Movie Film For Theaters. Cut You Up with a Linoleum Knife is a send-up of the classically annoying Lets All Go to the Lobby that obliterates all previous movie theatre interludes, with lyrics like 'Did you bring your baby? / Babies don't watch this. / Take the seed outside! Leave it in the streets! / Run over it after the show!'

We may not have evidence of Mastodon’s first TV appearance, but video does exist of the band performing the song 10 months later at the 2007 MTV Video Music Awards alongside Queens Of The Stone Age’s Josh Homme. And yet, despite the fantastic performance, and the marking of the band’s first major nomination, their appearance at the awards show is also infamous for a brawl involving System Of A Down’s Shavo Odadjian. According to a police report cited by Las Vegas Weekly, Brent Hinds drunkenly took off his shirt and hit Shavo with it, then punched singer-songwriter William Hudson in the face and chest. The victims retaliated, dishing Brent a broken nose, some black eyes, and a bad head injury. …Okay, in retrospect, while the latter half of this moment is laughable in hindsight, maybe it actually wasn’t so “great” at the time.

Mastodon’s movie career didn’t end with one track for a cult animated flick – the band doubled down on its Hollywood contributions with an entire score for a feature length film. Unfortunately, even with its soundtrack – composed by Mastodon and Marco Beltrami – the DC comic adaptation of Jonah Hex hit theaters on June 18, 2010 with what can only be described as a shudder-inducing thud: after an onslaught of chillingly bad reviews, the movie only grossed $11 million on a $47 million budget (and that’s even with the band scoring the film for “basically nothing”). But the bright spot here is that it provided a new and exciting experience for the band, proved what they were capable of, and likely served as much of an influence on their future releases as Blood Mountain did on this movie.

When Mastodon played their largest headlining show to date at the 5,000-capacity O2 Academy Brixton in London, England, their performance was (thankfully) documented for a DVD appropriately titled Live At Brixton. Clocking in at over 90 minutes long, the DVD/album features nearly two dozen songs and is widely regarded as one of their greatest live shows ever recorded. One footnote of potential interest: though the album was initially released digitally, it was later reissued on vinyl as a Record Store Day exclusive (See? Big things happen on Record Store Day!).

After contributing a track to HBO’s Game Of Thrones mixtape called White Walker, Mastodon eventually closed the loop on the pop culture crossover by actually appearing on the show as White Walkers. Brann, Bill, and Brent were first featured on the show as Wildings on March 30, 2015, but were all murdered as quickly as they showed up on screen. Just over two years later, the trio would re-emerge on TV’s most popular show as undead White Walkers, thus proving that heavy metal has officially infiltrated mainstream culture, and Mastodon are the kings.

Perhaps none of Mastodon’s achievements have been as meaningful as the most recent one on this list. Their Best Metal Performance GRAMMY Award for Sultan’s Curse this year puts the band in company with such metal vets as Black Sabbath, Metallica, Slayer, Slipknot, and Tool (also, Tenacious D… but 2015 doesn’t count). Third time’s a charm, as they say, with the band finally winning after nominations to the category in 2007 and 2015 (we told you: 2015 didn’t count). The GRAMMYs aren’t the be-all and end-all music awards, but they are certainly the most famous – proving that Mastodon are now undeniably metal legends, as acknowledged even by the mainstream music industry.