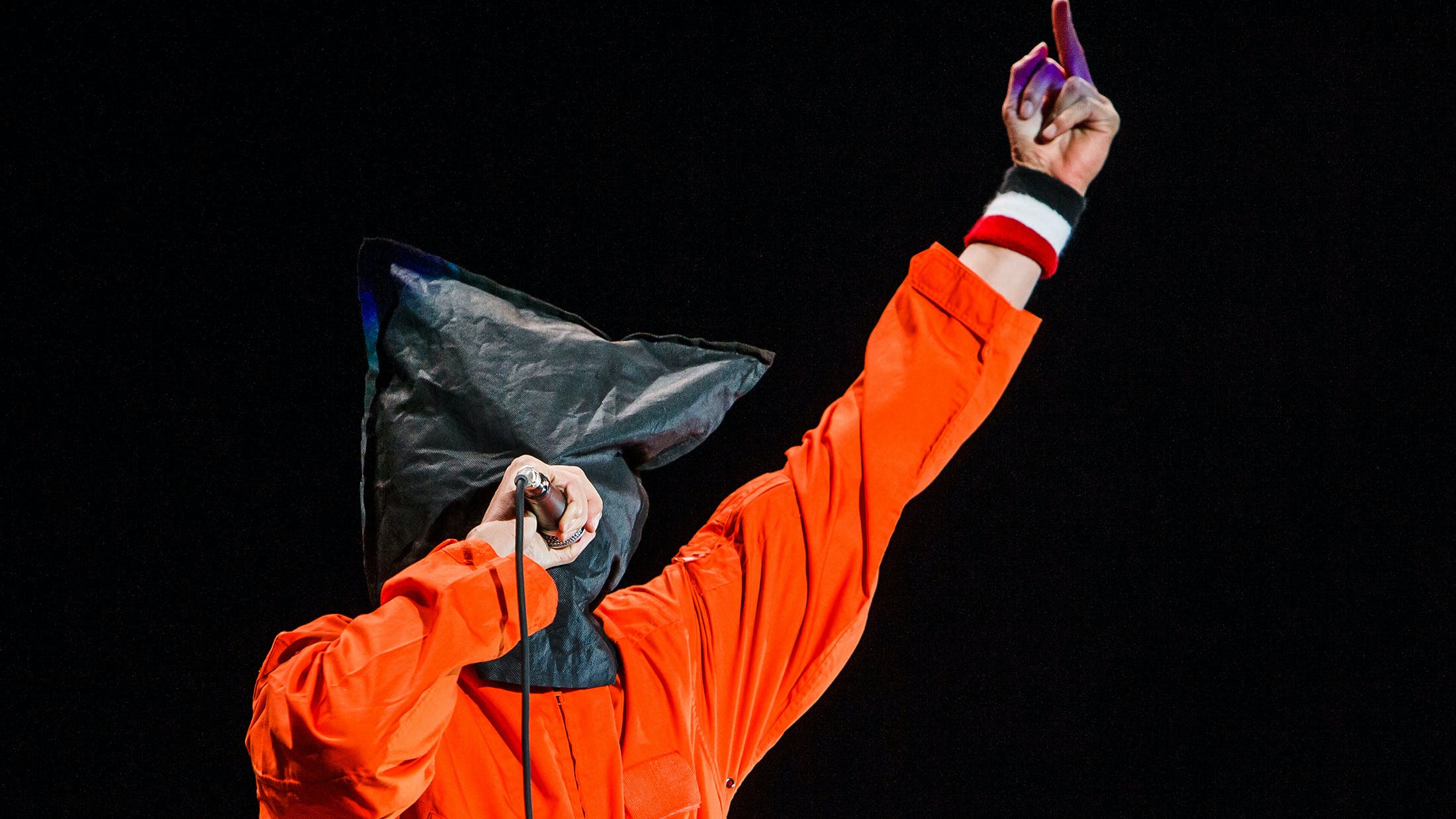 Like every plan you made for 2020, Reading & Leeds was cancelled months ago. The jewel at the end of the British festival season, in a Bank Holiday Weekend so we can rest our weary heads on Monday, the red and yellow extravaganza has provided some memorable performances over the years.

Whether it was Enter Shikari playing five shows in one weekend, Greg Puciato pooing in a bag or the Daphne & Celeste backlash, we've seen countless bands make a name for themselves over the weekend (usually in a good way). All eyes, however, are usually on the headliners, and if they've got what it takes to command a crowd of 80,000. Some flourish, some fail, some land somewhere in-between, but here we look back at the 11 greatest headline performances Reading Festival has ever seen…

One of Nirvana’s biggest and most famous shows of all time, and tragically their final performance in the United Kingdom. A year removed from their seminal Nevermind album that sent them stratospheric, the Seattle icons were one of the most talked-about bands on the planet (not always positively), but this landmark set silenced all critics and cemented the grunge trio as one of the greatest bands to ever do it. From frontman Kurt Cobain’s entrance in a wheelchair and wig to life-affirming performances of Come As You Are, Been A Son and the monolithic Smells Like Teen Spirit, their one and only time at Reading has arguably never been topped by anyone.

It started with a tantrum and ended with tears. As if the pressure of your first-ever festival headline slot isn't enough to contend with, having your direct sub-headliner – Nine Inch Nails' Trent Reznor, no less – publicly question "whoever the fuck [you] are" in the hours leading up to stage time can't do much to settle the nerves. Biffy Clyro, however, simply used such baiting as kindling for the fire in their eternal-underdog bellies. Ninety perfectly crafted minutes proceeded to evaporate in the blink of an increasingly damp eye, the curtain-closing one-two of Stingin' Belle and Mountains eventually breaking 80,000 emotional levees and creating more of a flood risk than any of the festival's trademark downpours ever could. Britain's best band had truly arrived.

Ten years after his Nirvana set, Dave Grohl returned to bill-topping stature at Reading with Foo Fighters, two months before dropping their monumental One By One record. That didn’t stop them slotting in five tracks from their then-forthcoming masterpiece, firing on all available cylinders through All My Life, Low and Times Like These, alongside the already established classics of Breakout, Learn To Fly and Monkey Wrench. We’ll never tire of seeing the Foos end a set with Everlong – and headlining Reading is now par for the course for Dave and the gang – but witnessing it for the first time was an unforgettable moment.

Though it seems almost impossible to think about now, My Chemical Romance’s UK festival sets didn’t always go down so well: at both Reading 2006 and Download 2007, the New Jersey emo heroes were subjected to quite the bottlings. Fast-forward several years and one explosively colourful fourth album later, though, and the band proved all doubters wrong when they topped the Reading & Leeds bill in 2011 – their only UK fests of that year. The set was six months in the making, and saw Gerard Way and co. blast through iconic rock behemoths like I’m Not Okay (I Promise), Famous Last Words, Teenagers and Helena amid video walls, lasers and epic fireworks. Then, to top it all off, they brought out Queen guitarist Brian May for an emphatic cover of We Will Rock You and closing smash Welcome To The Black Parade. Unsurprisingly, My Chem later called the night, “The greatest show of their lives.” That is, until they return to arenas and stadiums on their eagerly-anticipated reunion tour next year (we assume).

Linkin Park’s first-ever UK festival headline slot came in 2003, standing atop a main stage that also boasted future headliners blink-182 and The Darkness. Coming just months after they re-established themselves as the biggest nu-metal band on the planet with Meteora, their celebratory Friday night party came at the start of a year-long world tour that would further etch their names into the book of Rock’s Greatest Live Bands. How could a set from a fiery LP comprised of just the first two albums fail? Papercut, Faint, Numb, One Step Closer, By Myself… those looking for a toilet break were shit out of luck. Bangers for days.

Rage Against The Machine 2008

After their (first) reformation in 2007, all eyes were on RATM’s next movements in the UK, and closing the first night at Reading Festival the following year was a no-brainer. While there were some standout performances on the main stage that day, Zack De La Rocha and co. were also the much-needed antidote to the indie landfill bullshit of The Fratellis and The Enemy a few hours earlier. Starting their set in Guantanamo Bay-style jumpsuits and hoods, standing in silence, before ripping into Bombtrack was a moment of subversive genius – and from then, it was on. Testify, Bulls On Parade, Guerrilla Radio, Freedom… timeless protest anthems that sent Reading’s pitters into a frenzy of middle fingers and swinging elbows. Anyone who moaned about their booking in 2020 is a moron.

There have been few Reading sets with as much emotional weight and breathless catharsis as when Pearl Jam took to the stage to close 2006’s festival. Following the tragedy at Denmark’s Roskilde Festival, in which nine fans were killed in a crowd crush during the band’s set, Pearl Jam had said they would never play a festival again. But six years later, with Eddie Vedder solemnly urging the audience to look after one another, they returned to Reading for their first festival show since that awful day, for a performance that came with a whole wave of heavy feeling – at one point an overcome Eddie wept onstage – but also became a triumphant celebration of life, togetherness, and facing your fears so that you may better understand them.

With moments of tenderness, and others of full-throated unloading, the show was a complex rollercoaster of deep, real wounds. But also of euphoria, of love, of moving forward. One must never forget those who lost their lives at Roskilde, and had Pearl Jam quit – as they originally considered – or never played a festival again, nobody would have thought any less of them. But by digging deep, they showed just how comforting and powerful music can be.

You can’t have too much of a good thing and in 2014, Reading had two headliners on Friday night: Paramore and Queens Of The Stone Age. After sub-headlining in 2010 and 2012, it was finally the pop-punk legends’ time to shine… although not without mishaps. A power outage led to 15 minutes of silence from the stage, but that didn’t spoil the party, and led to an unforgettable acoustic rendition of The Only Exception. Lesser bands would’ve faltered or even stormed off in a tantrum, but Paramore’s resolve for The Show Must Go On proved they were more than capable of topping UK’s rock extravaganza, before climaxing with Proof and a confetti drenched Ain’t It Fun. Could we have them back soon, please?

Although Iron Maiden’s spiritual festival home will always be at Donington, it should never be forgotten how important Reading has been to their story. When they first appeared on the bill in 1980, the then-Paul Di’anno-fronted band were watched by one Bruce Dickinson. When they returned two years later, not only was he leading the group, they were headlining – six years before they’d accomplish the same feat at Donington. Maiden wouldn’t return to Berkshire for another 23 years, but when they finally did, as part of the Eddie Rips Up The World Tour featuring long-absent-from-setlists cuts from their first four albums, it was a canny celebration of those early years that showed that Maiden are not a band to take the easy road.

Some songs hadn’t been played live for decades: Drifter had been missing in action since 1983, while Another Life hadn’t done the rounds since 1981. But as well as a look back, it was also a fearless example of the band only ever taking chances. Iron Maiden could have walked Reading – a festival that had become something else entirely since they were last here – with an easy set of known bangers. Instead, they delivered something more challenging, more niche, but still absolutely won the day.

Nobody could touch Green Day in 2004. That autumn was the start of their rapid ascent from punk noblemen to conceptual artists supreme and ultimately stadium headliners. Mere weeks before they dropped the incendiary American Idiot LP, though, the Oakland trio headlined one of the UK’s biggest stages, opening on the title-track of their new record, letting the world know what it was in for. From then it was a greatest hits and covers celebration, sending bodies bouncing and bruising for a stonking 22 tracks, including a deafening Basket Case, Minority and She alongside covers of Buzzcocks, Operation Ivy and Ramones. While it was American Idiot made them household names, this landmark performance confirmed they were ready, willing and more than able to graduate to the Next Level – the following year, they played to over 130,000 people across two nights at Milton Keynes Bowl.

The mid-’90s saw a climactic boom for British music. Oasis vs. Blur and the Britpop wars dominated charts and newspaper headlines, changing the landscape of the UK music industry with it. Radio waves were awash with British guitar bands of varying quality and that scene dominated the main stage at Reading in 1997. Headliners Suede and Manic Street Preachers were joined by various countrymen and women, including Terrorvision, Cast, James, Space, Kenickie and Super Furry Animals. Surely booking a huge American metal band to close the festival was madness? Not a bit of it. Late ’90s Metallica might not be the Four Horsemen at their creative best, but few bands could hold a candle to their ferocity and intensity onstage. Casually strolling out after the sun had set, already jamming No Remorse before launching into a rendition of So What? (a British punk classic), the thrash legends unloaded a frankly ridiculous (and sweary) setlist onto Little John’s Farm. Tens of thousands of bodies all moved as one amorphous mass to Sad But True, King Nothing, For Whom The Bell Tolls, Creeping Death and even a cover of Queen’s Stone Cold Crazy. Metallica might have since become synonymous with British summer, but it was the unstoppable, blistering performance at Reading that welcomed the Bay Area giants into our festival famileeeeh.