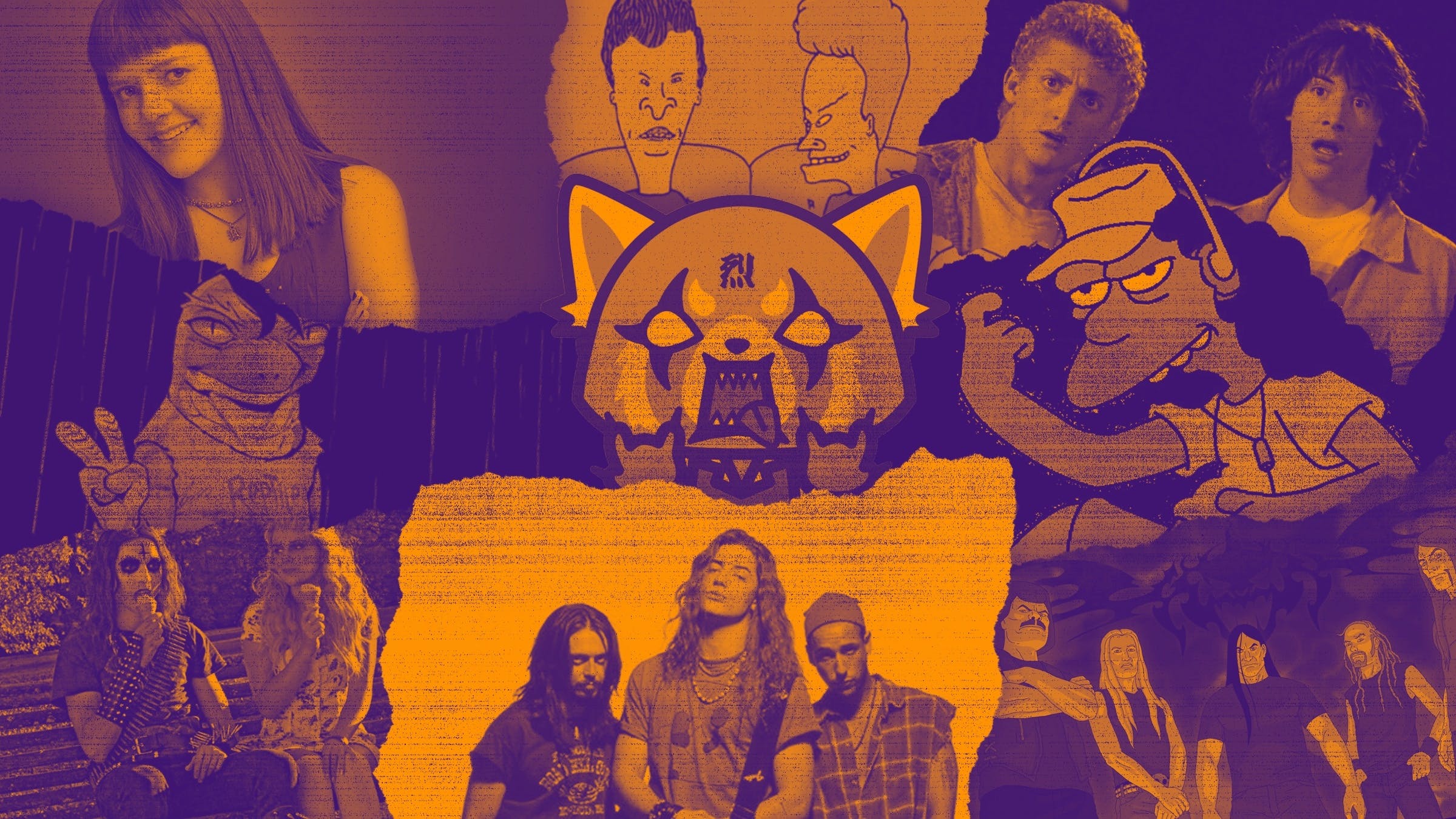 On the one hand, mainstream culture is often intimidated and put off by metal itself. And that's fine – metal is too good for most people. But on the other hand, TV and movie writers love depicting heavy metal fans for the chance to show off. Any chance to portray someone wearing a skull T-shirt and spouting valley-girl slang is adored by the media, who love parodying those with an extreme lifestyle they don't entirely understand.

Obviously, plenty of these fictional metal fans are ridiculous caricatures we can easily ignore. But sometimes, whether it's because an actual fan helped create them or because they're so ridiculous it's funny, these characters become some of our favourites in all of pop culture. These depictions become totems for us, proof that metal culture is strong enough to be represented in the world at large.

Here's our list of the 12 best metalhead characters in pop culture. And before you e-mail us, we know some of these entries include more than one character – but come on, what were we supposed to do, rank Bill over Ted?

Though more of a skater kid than a diehard hesher, Ninja Turtles ally Mondo Gecko has heavy metal all throughout his lore. He was originally part of a heavy metal band named Merciless Slaughter before being mutated into a giant lizard, and dresses like pretty much any member of Anthrax in the ’80s. A giant skateboarding trash-blasting lizard – it’s like something from one of your favourite album covers.

The musical tastes of Tony Soprano’s loudmouthed son Anthony never get directly examined on The Sopranos, but they’re always in the background. Between his shirts and the posters in his room, Tony Jr. is shown to be a fan of bands including Nevermore, Stuck Mojo, and Fear Factory (there’s even a whole Twitter dedicated to his shirts). Unfortunately, later in the series, as he comes into his own, he trades his metal fandom for a love of Bob Dylan. Fucking lame.

By day, Hello Kitty’s red panda counterpart Aggretsuko is a conflict-avoidant salarywoman trying to make ends meet and stay afloat in a sea of paperwork and stupid coworkers. But at night, she drinks a shitload of beer and performs extreme metal karaoke as a furious, corpse paint-wearing version of herself. Any longhair who’s had to politely nod at a boss they hate knows a thing or two about this little panda’s struggle.

The reason we picked Medina, Kimberly Crossman's high school love object-turned-badass axe-wielding metal warrior, over the other characters from the 2015 horror film Deathgasm is because of her journey. At the beginning of the movie, Medina listens to the same music everyone else does, but then she tries listening to metal… and is totally fucking completed by it. By the end of the film, she's chopping up possessed zombies and schooling her boyfriend on Cannibal Corpse trivia. That progression is one most metalheads have experienced in their lifetime.

When it came time to depict the Reaper himself, the makers of Cartoon Network's Regular Show just went with their gut… and made him Lemmy. Right down to the warts, Regular Show's Death is such an obvious depiction of Motörhead's god-like frontman that it's almost criminal. Then again, any true metal fan can't deny that if they met the End Of All Things, and it was Lemmy with a skull face, they wouldn't be all that surprised.

Unlike Anthony Soprano, Becca Moody (played by Madeline Martin) from Showtime's Californication isn’t just a metal fan in the background of the show. The black-clad daughter of David Duchovny’s troubled novelist Hank Moody is a dyed-in-the-wool misanthrope with a Wednesday Addams streak. And, as the clip below demonstrates, she knows how to properly address The Lord before dinner.

Technically a “powerslob” trio, Chaz, Rex, and Pip from the 1994 heist comedy Airheads are pretty fucking metal. The dudes take hostages in their favorite radio station in an attempt to get their demo played on the air… but they also do so with water guns, and are later revealed to be huge nerds, which is the kind of real-world tomfoolery all metal fans know in their bones. They get extra props for having Obituary stickers in their van.

Sixty-nine, dudes! Few metalheads in pop culture are as lovable as Bill S. Preston, Esq., and Ted “Theodore” Logan, the time-traveling rocker teens from 1989’s Bill & Ted’s Excellent Adventure. And while their long-awaited third instalment Face The Music was released earlier this year, we’ll always remember them as the good ol’ time-traveling high school failures we know so well. Plus, how great is that Iron Maiden reference?

Do they count as being “metalheads” if they're the biggest band in the universe? Globe-spanning cultural force Dethklok are about as brutal as it gets, becoming the world’s eighth-largest economic force on the power of death metal alone. The fact that they’re also a bunch of depressed, out-of-shape humps only adds to the unholy blackness surrounding them. Behemoth can call us when they summon a Finnish lake troll.

Whether they’re headbanging to Bohemian Rhapsody or bowing before Alice Cooper, Wayne Campbell and Garth Algar are easily the most metal dudes to come out of Aurora, Illinois. Though not very dark or extreme, these affable public-access TV stars epitomize the hard rock archetype for most of the mainstream world. And you know you’re jealous of Garth’s partially tie-dyed Mötley Crüe shirt.

It’s not just that Beavis and Butthead are the snickering, judgmental, slacker metalheads we all secretly feel like on the inside. It’s that they helped launch the careers of several metal bands, using the music video segments of their show to showcase rising acts like White Zombie and Pantera. What else is there to say, other than ahuh, ahuhuhuhuh, huhuhuhuhuhuh…

Hail to the bus driver! Otto Mann is a metalhead everyone knows, both from history’s longest-running TV show and from their personal lives. Otto drives like a maniac, shreds like a champion, never takes his headphones off, will try pretty much any drug once, and owns mustard he doesn't know about. At the same time, he’s a good-natured dude who loves his job and the kids around him, even when he has to use the Springfield Elementary “credit card”. When it came time to pick a number one spot for this list, the choice was, simply put, no problemo.