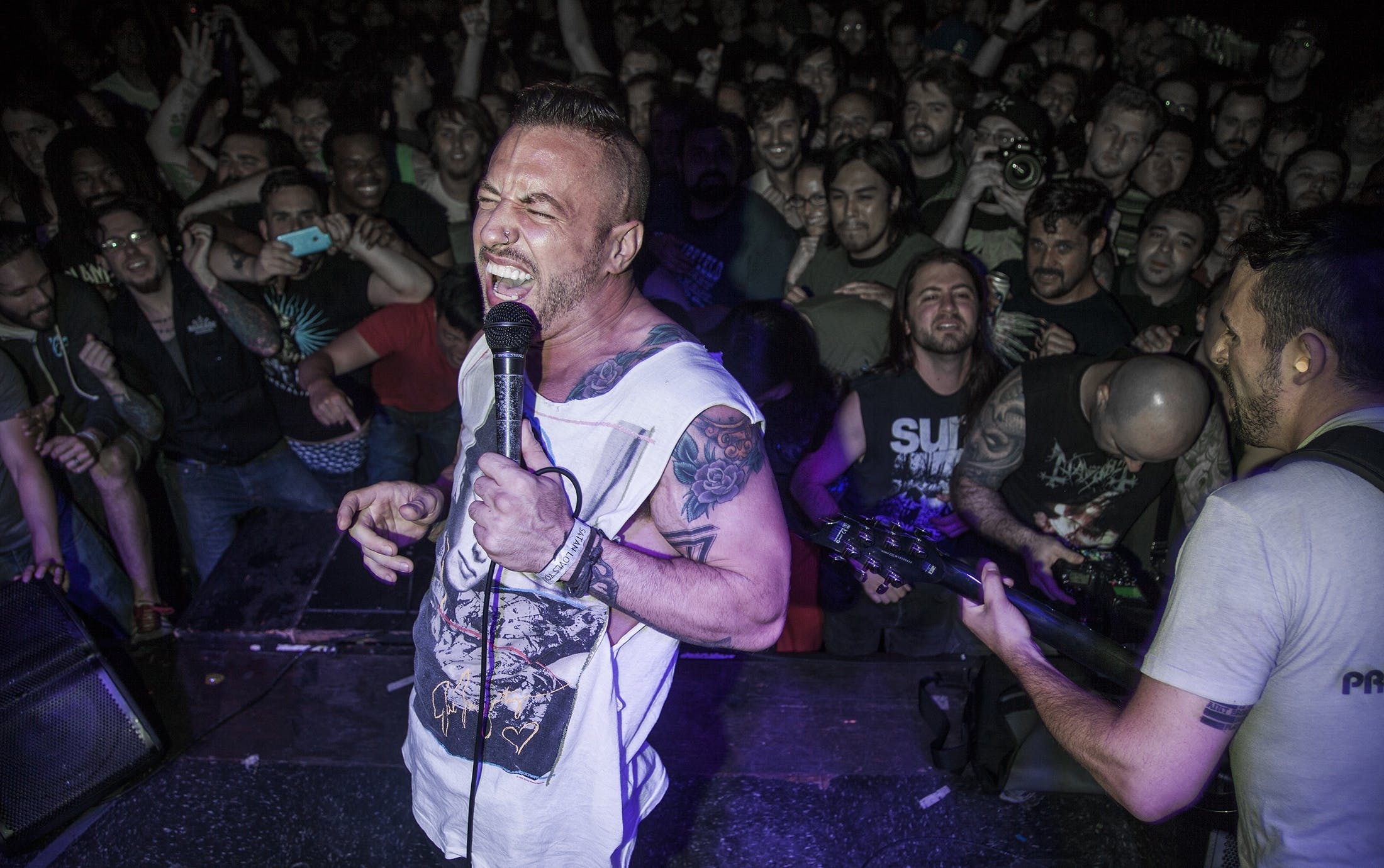 In the very northernmost part of Brooklyn, New York, in a neighborhood called Greenpoint, sandwiched between a deli and a Mexican restaurant, you’ll find an inconspicuous black door. It bears no signs, and gives no intimation of what lies behind it. If you didn’t know any better, you’d never guess that it is the gateway to one of the most remarkable metal bars in the United States.

Saint Vitus Bar is about the size of a shoebox when compared to the venues usually played by the A-list bands it has hosted. In fact, the room’s capacity is a mere 250 people. But that hasn’t stopped the likes of hundreds of huge punk, metal, and hardcore acts from performing some of their most special and memorable shows ever there.

Bar co-owner Arthur Shepherd believes that it’s the “intimacy with some of the biggest acts in the world” that makes the local spot legendary. “We also have an emotional connection to the people that come to the shows that I think a lot of the more corporate places can't do. It's a place made by fans, for fans -- and everyone can feel that.”

And that’s not just figurative. If you’re in the crowd, you can literally (respectfully, please) touch some of rock’s most famous musicians as they walk by. No matter who they are or how many of their records have gone gold, the band must part its audience to get to the stage. Artists use the front door and walk by the bar just like everybody else, and at any moment they may be a hair’s breadth away. “Many times I have been the person leading the band to the stage, and it's amazing to watch people's faces light up,” Shepherd says. “Of course, getting back out of the room is really hard.”

Until you go there yourself, you probably can’t fully understand the magic of this incredible venue. But to give you an idea, here is a short round-up of the most epic shows ever played at Saint Vitus:

Saint Vitus has hosted its fair share of secret shows -- the most notable being a tribute to Nirvana featuring original members of the iconic band (yes, including the one and only Dave Grohl) and an all-star roster of guest vocalists, including Joan Jett, J. Mascis, St. Vincent, Kim Gordon, and John McCauly of Deer Tick. The performance immediately followed Nirvana’s 2014 Rock & Roll Hall of Fame induction ceremony, and was dubbed “one of the most amazing after-parties in the history of New York City” by Rolling Stone.

The night before frontman Dave Mustaine hosted the 2016 Revolver Music Awards, he and his bandmates hit the stage for a far more outrageous performance: Under the pseudonym Vic and the Rattleheads, Megadeth played a secret show at Saint Vitus for some very lucky fans.

In 2012, New York attempted to bring part of Riot Fest to Brooklyn. Unfortunately, when a tornado warning was issued, the fest was cancelled. Abiding by the old “the show must go on” adage, Descendents and Hot Water Music decided to throw a free show at Saint Vitus instead.

Shepherd describes this legendary band’s sets at Saint Vitus as “particularly insane.” Dillinger played the venue twice -- once in 2014 and again in 2015. The recently disbanded metal act were known for the chaos they brought to their shows, and in a place like Saint Vitus, that chaos was all the more intense.

Speaking of chaos, Converge unleashed hell both in 2013 and 2017 when they played the intimate venue. The first show came off the heels of their 2012 record, All We Love We Leave Behind, while the latter was performed shortly after the release of The Dusk In Us.

According to Shepherd, doom metal bands tend to sound the best in Saint Vitus. “YOB would probably be my favorite of the ilk,” he declares. (Given the satanic decorations everywhere and the fact that there is always just barely enough light to see, we agree that doom bands like YOB probably do fit the atmosphere the best.) In 2014, the band played three consecutive shows at the Brooklyn bar, both of which were at least an hour and a half long.

Seeing as they hail from New York, it’s only natural that Coheed would return to Saint Vitus in 2015 to play a show in support of their new record, The Color Before the Sun. Who knew that there would be enough room in the bar for Claudio’s hair?

Now 33-years-old, famed UK death metal band Carcass have been all over the world multiple times over. Despite the hundreds of major venues and festivals they’ve played, though, their unbelievably intense performance at Saint Vitus in 2013 (in support of their record, Surgical Steel) is nearly impossible to rival.

Let’s be real: Any Against Me! show would probably top most people’s lists, but in a space like Saint Vitus, the epicness was all the more concentrated. Their 2014 show was the after-party following their blowout performance at one of Manhattan’s favorite venues, Webster Hall. Clearly, Saint Vitus is where all of the best rock after-parties go down.

Are you sufficiently stoked on Saint Vitus? If you're in New York this summer, be sure to head to the bar to catch Kerrang!'s first ever series of U.S. shows, headlined by Mutoid Man, Hopesfall, and Pallbearer!