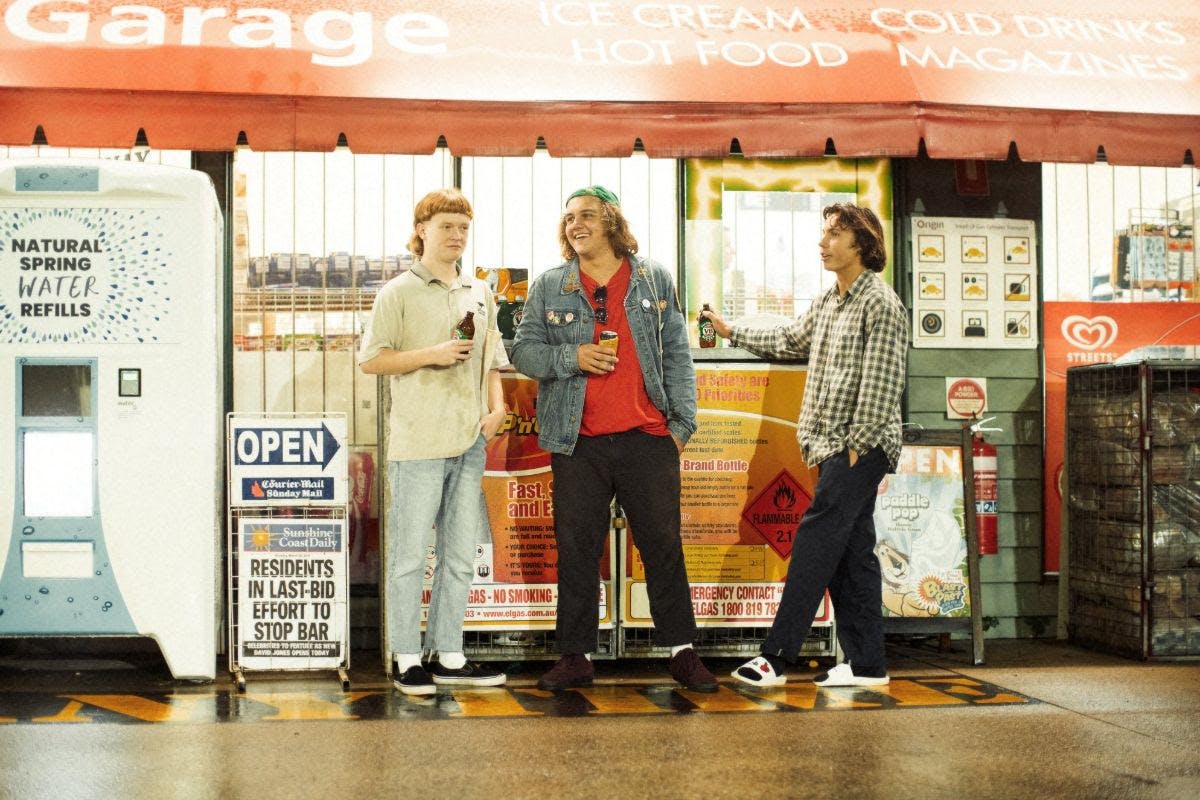 Don’t call The Chats punk rock. They might play short, sharp blasts of pulsating noise, filled with raw youthful energy and ragged, holler-along hooks, but that, they say, does not make them a punk band.

“Punk rock’s not a genre of music, it’s more of an attitude,” shrugs guitarist Josh Price. “We do have that rebellious attitude I guess, but we’re influenced by AC/DC and a lot of other Aussie rock bands like The Saints, The Angels and Radio Birdman. If you had to pick a genre for us to sit in, it’s just rock’n’roll. Either that or shed rock.”

Ah yes, shed rock – their label of choice based on the structure in which they spent their formative days in their native Sunshine Coast in Queensland, Australia.

“It was our mate’s bong shed and he used to have a couple of pet snakes in there. We had a pool table and the ping pong and everything. We’d play music and have a good time out there,” recalls Josh.

It was in this shed that they wrote their self-titled debut EP, which was recorded at their high school. They followed this with a second effort, Get This In Ya, in 2017. Their songs dealt with everyday concerns like having parents pilfer your smokes (Mum Stole My Darts), Victoria Bitter (VB Anthem) and running out of cash (Bus Money). Their most recent single Identity Theft, says vocalist and bassist Eamon Sandwith, was inspired by “that episode of Black Mirror where the guy gets caught wanking”.

They didn’t necessarily seem like a band with a broad international appeal, but that all changed a little over two years ago when they filmed and uploaded a video for the song Smoko, a paean to the great Aussie labour tradition of the cigarette break. The hilarious homemade clip cost them just $4 – the cost of the sausage roll that Josh eats in the video – but it went viral overnight, racking up a million views by the time they checked back in on it the next morning.

This led to Australian tours with Queens Of The Stone Age and Iggy Pop, followed by their first forays overseas. This included one particularly memorable aftershow in LA when they toured the U.S. for the first time.

“We texted Josh [Homme] and said, ‘Hey, we’re playing in LA if you want to come down to the show,’” Josh says. “He said, ‘Put me down for plus four’ and we thought he might have been bringing his family. I walked out of the green room and there was Josh with Dave Grohl and the guys from the Arctic Monkeys. Dave called me by my nickname, ‘Pricey’, and I gave him a hug. It was pretty surreal!”

Since then the trio have also battered the UK, playing“stupidly big and mad” sets at Reading and Leeds, and more recently, a lengthy sold-out tour that ended at London’s O2 Forum a couple of weeks ago.

So what’s the appeal and why are people across the globe latching on to The Chats’ decidedly Aussie fare?

“I think it’s because we’re so blatantly Australian,” he reckons. “We’re not trying to be anything else. We’re just being ourselves and I think that’s what people like about us. There are some cultural similarities, especially in places like the UK and we’re singing about everyday things. Even if the slang’s different, it’s the stuff that no-one talks about, but everybody does. And I think a lot of people can relate to that.”