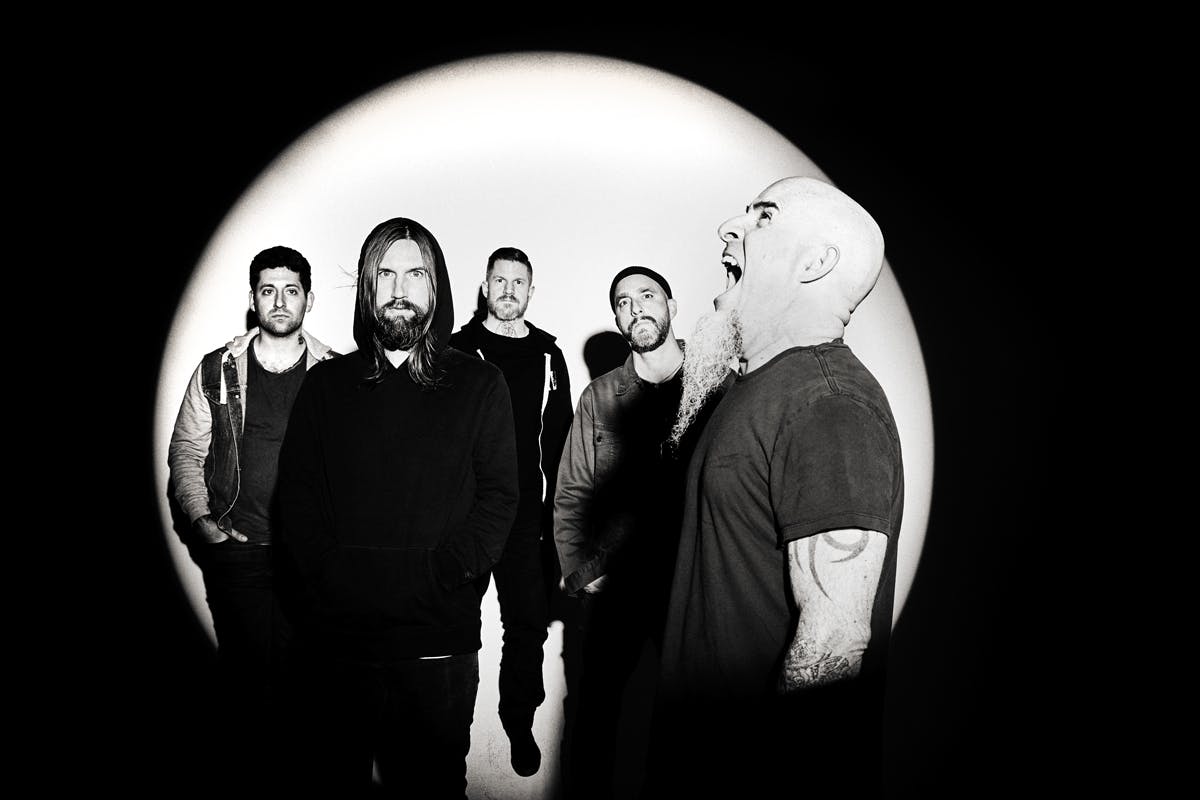 Almost a decade after the release of their debut album Ironiclast, The Damned Things are back with a brand-new single, Cells, and news of their second record High Crimes.

The supergroup's updated line-up – Every Time I Die's Keith Buckley, Fall Out Boy's Joe Trohman and Andy Hurley, Anthrax legend Scott Ian and the new addition of Alkaline Trio's Dan Andriano – will be releasing their new full-length on April 26 via Nuclear Blast, and you can pre-order it now.

“Normally, when career bands say they made a record for fun, they didn't – but we actually did. Maybe that's why this band doesn't have a career?” says Joe. “Anyway, we're genuinely proud of it. Check it out, and watch the video to see how severely injured we got during the process!”

Check out Cells below:

The album artwork for High Crimes looks like this:

We caught up with Joe Trohman in this week's issue of Kerrang! for a massive chat on all things High Crimes – a snippet of which you can read below…

It’s been nearly 10 years since the release of Ironiclast, and you’re finally back with a second album, High Crimes. What made now the time?
“Well, I was working with a producer buddy of mine. We weren’t working on The Damned Things stuff – he was working with another artist, and he asked me if I wanted to write new music for this person. I’m not sure what happened to her, but she went somewhere… maybe she died or left or something (laughs). But then we did these songs and I was like, ‘Oh, this could be for Damned Things!’ I was ready to do it all again if the other guys were, and then I played them the songs and they were into it, too. It started out more as an EP, but then it got to the point where we just made a whole record. The more we put into it, the more we were like, ‘Okay, let’s just do this.’ I hate using the term ‘organically’ because it’s a pretty shitty buzzword, but it happened organically (laughs).”

You’ve had some line-up changes: Rob Caggiano and Josh Newton are no longer in the band, but you’ve acquired Dan Andriano from Alkaline Trio instead. How has he moulded into The Damned Things?
“Dan’s great! He brings monster bass playing, and if we do more Damned Things he’ll bring more songwriting. But he’s also such a good guy; he’s so calm and collected, funny and cool, and he fits in really well. Originally I was going to play bass on the whole record, but he came in and replayed what I had done but added things – because he’s a bass player! We did his stuff over the course of two days, and he nailed it. It sounded way better, and I was like, ‘Oh, that’s the thing we’re missing, we’re missing a real bass player.’ He’s an amazing musician and a great guy.”

What sort of vibe would you say Keith has gone for lyrically throughout this record?
“What I would take from his lyrics is that they make me think about my struggles with depression, loneliness and isolation. I wouldn’t say that they’re entirely about that, but one thing Keith and I do commiserate with each other about is how we’re these broken, imperfect people trying to do their best for their families. He touches upon being away, never being able to do enough and being hard on ourselves, which I think comes out in our work ethic. We’re always really hard on ourselves.”