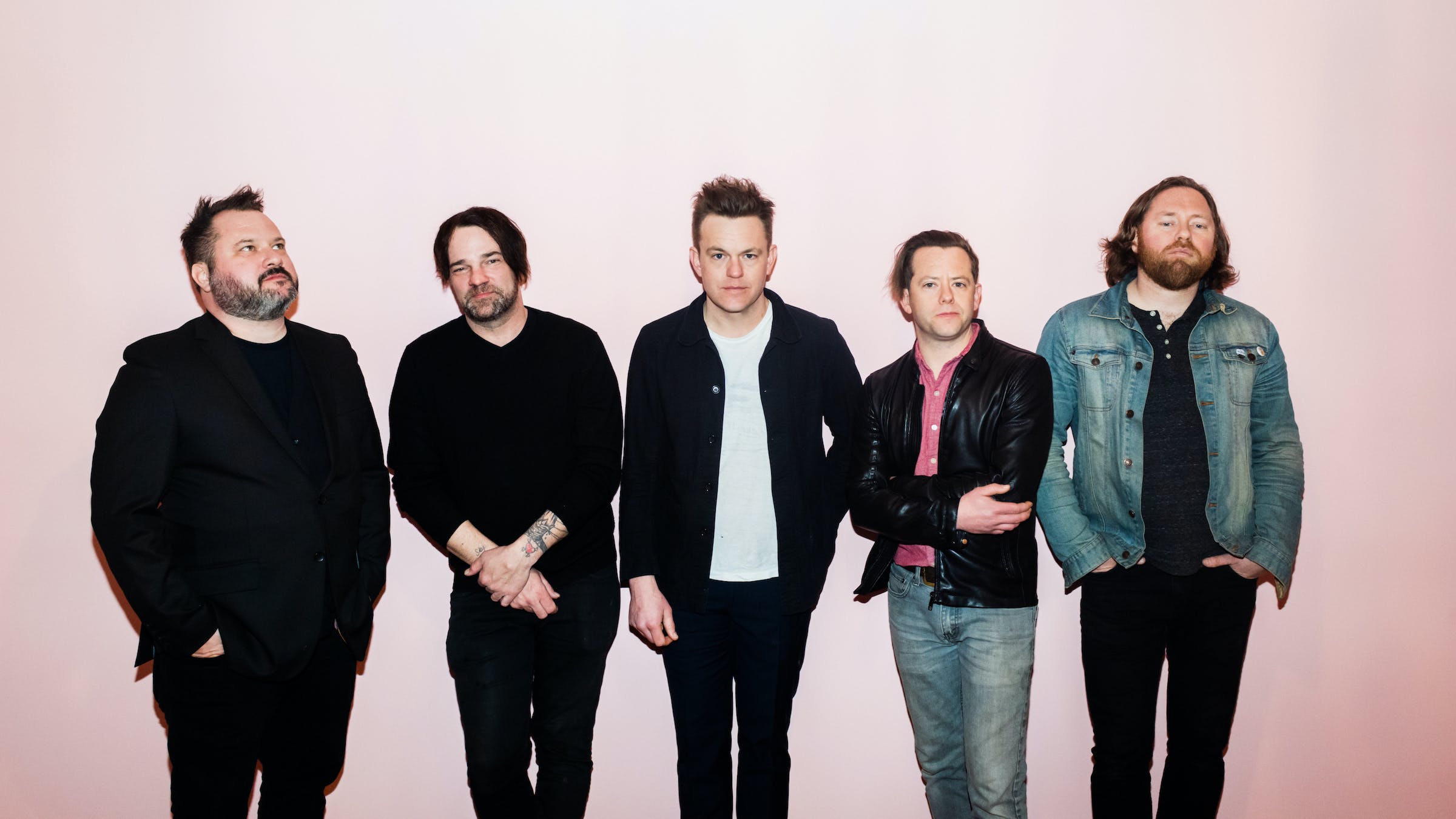 Talking to Matt Pryor and Jim Suptic is a bit like talking to a couple of excited school children. The pair frequently joke around, finish each other’s sentences and going off on tangents. It’s not, perhaps, what you’d expect from pair the vocalists/guitarists of The Get Up Kids, a band whose first two records especially -- 1997’s Four Minute Mile and 1999’s Something To Write Home About -- were staples of what came to be known as the second wave of emo, and which were both dominated by very open-hearted lyrics and emotionally intense songs. Yet despite the band’s influence, after 2002’s third record, On A Wire, things seemed to falter slightly. Fans weren’t into it, and after Guilt Show was released in 2004, the band broke up the following year.

They reconvened in 2008, played some shows for the 10th year anniversary of STWHA. In 2011, they put out their fourth record, There Are Rules, another album that challenged their base because it didn’t sound like anything they’d made before. And then the band went quiet again -- but now, almost a quarter of a century after they formed the band as teenagers, The Get Up Kids are back again with Problems. Not only is it a record that touches on every facet of the band’s career to date, but it also, as Matt and Jim explain, finds the band renewed, re-energised and -- most importantly – not caring about what anybody else thinks.

Problems is your first full-length record in eight years. How does that feel?

Matt Pryor: Not to sound too grandiose about it, but it kind of feels like the next phase almost – kind of like a 2.0 or a new beginning. It’s definitely a very new chapter.

Matt: Kinda. But I also don’t want to imply that we’re disappointed with what we’ve done before. I just think that even outside of the album, our inter-band relationship is probably better than it’s ever been in a long time. We’re all sort of re-rededicating ourselves to it. We’ve renewed our vows. And Elvis was the minister!

The two of you have been playing and writing songs together for another project, Radar State. Has that helped with the dynamic in The Get Up Kids?

Jim: I think Radar State came out of us being in a slow period of Get Up Kids, and I just wanted to stay busy playing music and not twiddling my thumbs. And it was good for songwriting, because that band is not overthought at all. Not that Get Up Kids is completely overthought, but it was just like ‘Here’s a song, let’s play it.’ Maybe I took that attitude, which is a good thing, back into The Get Up Kids.

Matt: You know when you’re at a restaurant and your food is taking forever to get there and you’re like ‘I don’t want to get up and go to the bathroom because I know my food’s going to get here’? We were waiting for The Get Up Kids to do anything because everyone was so busy with everything else and it was like ‘Fuck it – we’re going to do this other thing.’ And as soon as we did, The Get Up Kids started doing stuff again!

Why do you think it took so long to make this record?

Matt: When the band broke up in 2005, what we really should have done is taken a couple of years off, and that’s basically what we did in 2011. We did a whole world tour and were like ‘Okay, we need to stop for a while.’ Jim went back to school, Ryan [Pope, drums] moved to France, I did solo stuff, Rob [Pope , bass] played in Spoon and James [Dewees, keys] played in My Chem. So by the time we’d gotten around to being like ‘Let’s do this again’, then it takes a couple of years to get the engines to turn over.

Jim: I graduated college and we did our 20 year anniversary tour, and kind of after that I think we were just going to be weekend warriors. I thought I’d use my degree and do whatever with that, but then came to the realisation that I really like playing music a lot more, and I think we all came to the realisation that we can still do this. At the time, I don’t even know if we thought we’d make another record – we just thought we’d play some shows.

Matt: If all we’re going to do is play the old songs, then doing the festival scene or weekend warrior scene is all we’d really want to do with it. If we’re going to do this for real, we need to be making some new art.

Right, because when you started, you literally were kids. And now you’re not. Your first ever gig was the supporting Mineral the same day as your high school prom, right?

Matt: We did. You can find that show on YouTube, actually.

Jim: We went out to dinner first, then took the limousine to the all-ages club and played. Matt had already graduated the year before and was in college, so he helped break everything down, and then we took the limo from our show to our prom. I remember the show more than my actual prom!

Matt: Did you go to prom with Corby?

Jim: I did. I had just met my wife right before. It’s crazy.

So all these years later, what does this band mean to you now? How has the focus of your songs shifted – it seems like this record is more about external influences and the state of the world as opposed to the ‘emotional’ songs about relationships and friendships that defined those earlier years.

Matt: I think those ‘emotional’ feelings that we get made fun of so much, I don’t think those go away when you get older, but they become more well-rounded and less one-dimensional. We still feel very strongly about things, it’s just way more complicated than it as when you’re 19.

Jim: I think one thing that’s stayed the same is that we’ve always been a sincere band. Whatever we do, there’s sincerity to it. And you can sniff out insincere sincerity…

Jim: Like people use being sincere as a gimmick. Which is kind of what emo turned into. But I think we were never anything but ourselves and I hope that comes across in everything that we’ve done.

Jim: No. I think it’s a totally positive thing, but it became a negative thing because a lot of people were selling sincerity as a gimmick. And I think people can sniff that out and smell when it’s bullshit.

Jim: Maybe ‘authenticity’ is the word I’m looking for.

Matt: But even that’s subjective! All I know is that, for whatever reason with this band, if we’re not feeling it, it doesn’t work. If we’re fighting or we’re in bad places mentally, our shows suffer.

It seems you’ve always had to battle against people’s perceptions of what The Get Up Kids should be. When On A Wire came out, for example, people seemed very upset it wasn’t Something To Write Home About Part Two. Would you say that’s true?

Matt: To a certain degree. But if we had just made Something To Write Home About Part Two, that wouldn’t have been sincere or genuine. It would have sounded fake and forced and people would have hated that, too. At least at this point, I’m taking those lumps of doing something creative and maybe it not fully working out the gate actually made us stronger and made us have a longer career than some band that you can predict what they’re going to do every single time. And in a way, us doing On A Wire and The Promise Ring doing Wood/Water, Saves The Days doing In Reverie – all these bands were trying this more ambitious stuff that the fan base wasn’t ready for and it kind of signalled the death of the second wave of emo.

Do you think that was a subconscious thing, or were you all trying to get away from what you’d been labelled and pigeonholed as?

Matt: I think all of those people – and I can say this because I know all of them – wanted to try something creative.

Jim: Not that what we were doing before wasn’t creative!

Matt: I mean more like trying to expand our repertoire. And I think, for better or worse, the scene wasn’t ready for that at the time. And I think a lot of those bands, us included, when we started, had no thought that we’d ever be popular in terms of making a career out of music. So I think maybe back then our motives were different than maybe another wave of ‘emo’, where once it became successful, people were like ‘I want to sound like that because that’s how I’m going to sell records.’ But who am I to judge?

Do you have any of the same concerns about Problems and what people are going to make of it?

Jim: No. At this point, I don’t care. The reality we’re living in is so different than the reality I was living in when I was 22. I’m happy we get to go to Europe, and that we’re on a label still and that people give a shit about us still and we can still tour. The fact alone that were in our 40s and still doing this is more than I ever imagined I’d be doing.

Matt: To me, this record kind of feels like a culmination of the last 22 or 23 years of us making music together. We were joking around in the studio when we were done, like ‘Well, here it is – and if you can’t find something you like on this record, then you’re just not into our band and the songs that we write.’ There’s a lot of different elements of a lot of different things we’ve tried over the years on this record all housed under one roof.

Emo punkhardcoreThe Get Up Kids

Don't Call It A Comeback: The Get Up Kids On New Music, Creativity And Evolution

The Get Up Kids: A love letter to Something To Write Home About

Because we're beyond excited The Get Up Kids are back!