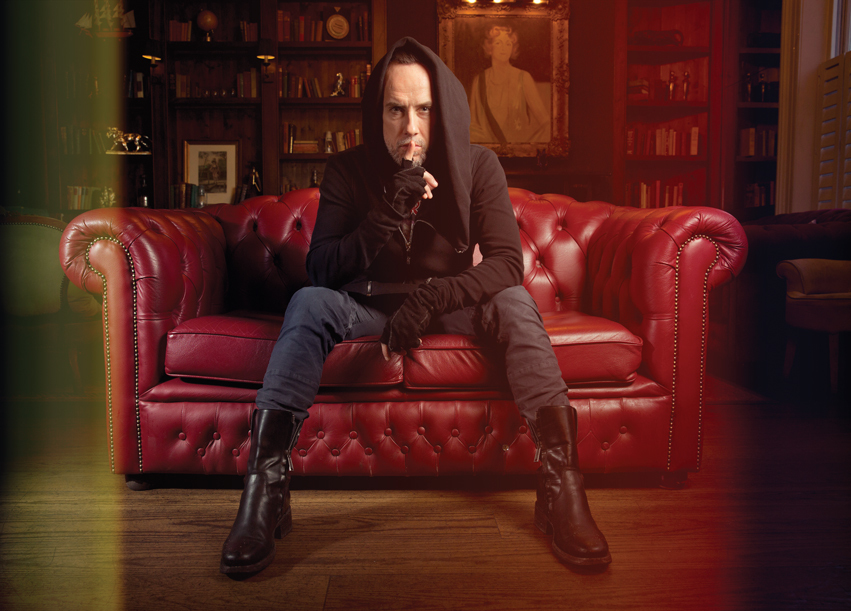 If infamous 20th century occultist and ‘wickedest man in the world’ Aleister Crowley’s ‘Do what thou wilt shall be the whole of the law’ philosophy has found a home in black metal, then surely Adam ‘Nergal’ Darski is its walking embodiment. Not a man to be told what to do, nor to keep his mouth shut in the face of adversity or stumbling blocks, the Behemoth frontman is a man who both buzzes with energy while also exuding the charming, zen cool of a person entirely comfortable in his own skin, having always made sure that his life is free of things that are neither useful or beautiful.

Not much bothers him, preferring to take in only that which makes him stronger and happier. But should you find yourself on the wrong side of this cheery, friendly diabolist, you will know about it. Having made his band one of the world’s biggest extreme metal acts despite coming from Poland and playing a style of music rooted in obscurity, clearly, he will not be beaten by anything, and he’s not afraid of anything either. Thus, Nergal is a man to whom we can put life’s biggies. We asked you to send in your questions and, gloves off, we put them to him…

READ THIS: Nergal: "There's nothing wrong with being hated"

Keith: Being on Instagram all the time and posting up pictures and videos of every single thing you get up to isn’t very black metal, is it?
“Well, what is ‘black metal’? Is there some rule where you’re not supposed to use these things? We didn’t use them in the ‘90s because they didn’t exist! But we did have a network – we wrote letters, we had zines. It was underground, yes, but it was also still a network. I’m not obsessed with it, but I like to show people what I’m doing. Whether that’s us on tour, or going to museums, or meeting friends, or doing sports or whatever, I like the idea of being able to present myself to the world in that way. Some people might call it vain, maybe, but I look at it from the point of view that I am also a fan of music. And so, like, I think about someone I’m a fan of, like Trent Reznor from Nine Inch Nails. Do I want to see the world through his eyes, see what he sees, have this very personal point of view from his perspective? Fuck yes. Because as an artist, he’s interesting to me, and I’d be interested to see what his world is like. I’m not comparing myself to Trent Reznor, or saying that people should want to look at my Instagram because I’m fascinating, but I like to be able to share things that are interesting in my life, and maybe other people like it.”

Gemma: Do you see black metal as having a future? Have you opened the gates for more bands to follow, or could Behemoth be its last success story?
“I think this music will have a future because of the people involved. Even when bands become bigger, this isn’t exactly pop music. It’s still got an underground, extreme mindset. And so I don’t think it attracts people based on how big they can be or how much money they could make. There’s something in the art of extreme metal and extreme music that attracts people to it. And it’s a place with a lot of creativity. That’s what’s important. If artists aren’t expected to do certain things in order to sell, they can focus on their art and making something special and unique. Sales can go up and down, whatever, but what’s important is the spirit. I don’t know who will become the next big band – or if there will be another really big band to come from the underground – but the spirit of the underground is always there. We do big tours and play big places and play with bands like Slayer, of course, but we have the spirit. We’ve never done anything we didn’t want to do, or changed what we are in order to do something.”

READ THIS: Nergal: "Rock has become too safe"

Mark: Would you ever apologise for anything?
“I’d like to think that I have always acted the way I thought was right. Of course, if you accidentally do something, or you have to cancel a show or something, you owe people that respect of an apology. But that’s not the same as apologising because you have done something you wish you hadn’t. That’s almost like the question of whether or not I have any regrets. No, because there’s nothing that can be done about things that have happened in the past, and it all adds up to where you are in your life right now. And I’m happy with where I am, and I have learned a lot over the course of my life. As long as I can say that, that’s all that counts. I’m at peace with the universe, man, and there are some people who don’t like what I do or how I approach things, or how I handle my business, or how I live my life. But that’s not my business. I just try to stay honest. I don’t try to intentionally make people hurt – I’m not here to make people hurt. I’m here to make people think. And I’m not here to make friends. I have made a lot of friends over the years because people do like what I bring to the table. Some people appreciate and like that, and some people fucking hate that.”

David: Who needs a slap?
“Jarosław Kaczyński, a Polish politician in the leading party PiS [Law and Justice party, a right-wing Christian political party]. He is an asshole, man. He is really backward, and he and his party are really holding Poland back. It’s like they want us to be isolated and not properly engage with the rest of the world. A lot of people in Poland don’t like them. It’s built on very backward, old-fashioned religious beliefs, which don’t help anyone.”

Charlotte: What would you be doing if Behemoth hadn’t become huge?
“I would still be doing some sort of art. I’d probably play music, but who knows? Maybe it would have meant that some other opportunity came up to do something different, and I’d followed that. I wouldn’t have wanted to do something boring, though. Whatever I was doing, I’d have to feel that I was putting my energies into something I loved and felt was rewarding. I didn’t become a musician to become a rock star, though – starting a black metal band in Poland in the ‘90s was not the easy road. But I have always been driven and ambitious in the things I do, and I’ve always done things I believe in. But success isn’t always about how big you are, or sales or whatever – is something fulfilling to you and are you fulfilling its potential and bringing it to life as it should be? That is success, as well.”

Craig: If you could bin off any Behemoth song, what would it be?
“I don’t think I have any. I’ve always felt that you should only put out things you are truly satisfied with and can stand behind. And of course, over time as an artist you grow and you learn and you improve your skills on your instrument or writing music, but that takes nothing away from what you have done before. There’s nothing I’m embarrassed about or anything – if it’s good enough to be on a record, it’s the best it could have been, and that’s all you can do.”

Brian: What are you a total nerd about?
“I don’t know about being a nerd, but I buy a lot of vintage metal shirts. Often when I come back from tour I have a load of new ones waiting for me at home. I like the original death and black metal shirt designs. There are definitely worse vices to have, but you can end up paying a lot sometimes. That’s when I go, ‘Do I really need this?’ but I often still go for it. Sometimes you can pick them up for a good price, though. So, yeah, I don’t know if it’s nerdy, but it’s certainly something I have built up quite a collection of.”

READ THIS: Inside Behemoth's Ilyayd exhibition

Claire: Would you still term Behemoth as being a black metal band?
“I came to the conclusion lately – I’ve been a fan of Laibach and Rammstein for, like, two decades now, and they’re bands that are much more than just rock bands. They definitely are rock, or industrial or whatever, but they’ve always had something that’s more than music. They create an entire world around what they’re doing. We are a black metal band, of course, but we are also something beyond that. Our artistic vision is vast, and we’re just trying to explore the channels as much as we can. I don’t wanna just be another rock‘n’roll band. I don’t want to be in a cycle of something that is out of the box. We want to do things our own way, not what the market says we should do, or what our management says we should do, or whatever. We’re eager to ‘go there’ and explore and try out.”

Nick: You’ve always been very outspoken against religion. Why is that?
“Well, I come from Catholic roots. I was baptised and had Communion, but when I was 16 I just rejected it. My upbringing wasn’t particularly strict or radical, though. It wasn’t like I came from a super-religious household where it was a problem for me and I was made to live a life I didn’t like or wasn’t comfortable with. It was all just so shallow. My rebellion wasn’t against my parents. It was against the church and it came from my observations. It’s just against my nature. When I renounced my religion, there was responsibility to it – I can do whatever I want to do with my life. I’ve always been a thinker, and I’ve always been a guy who likes to express and explore. You should always ask questions, because that’s how you understand and grow.”

Behemoth are supporting Slipknot across the UK and Ireland in early 2020. Get your tickets now.

Nergal and co. have teamed up with artist Rowan E. Cassidy for their own line of non-fungible tokens…