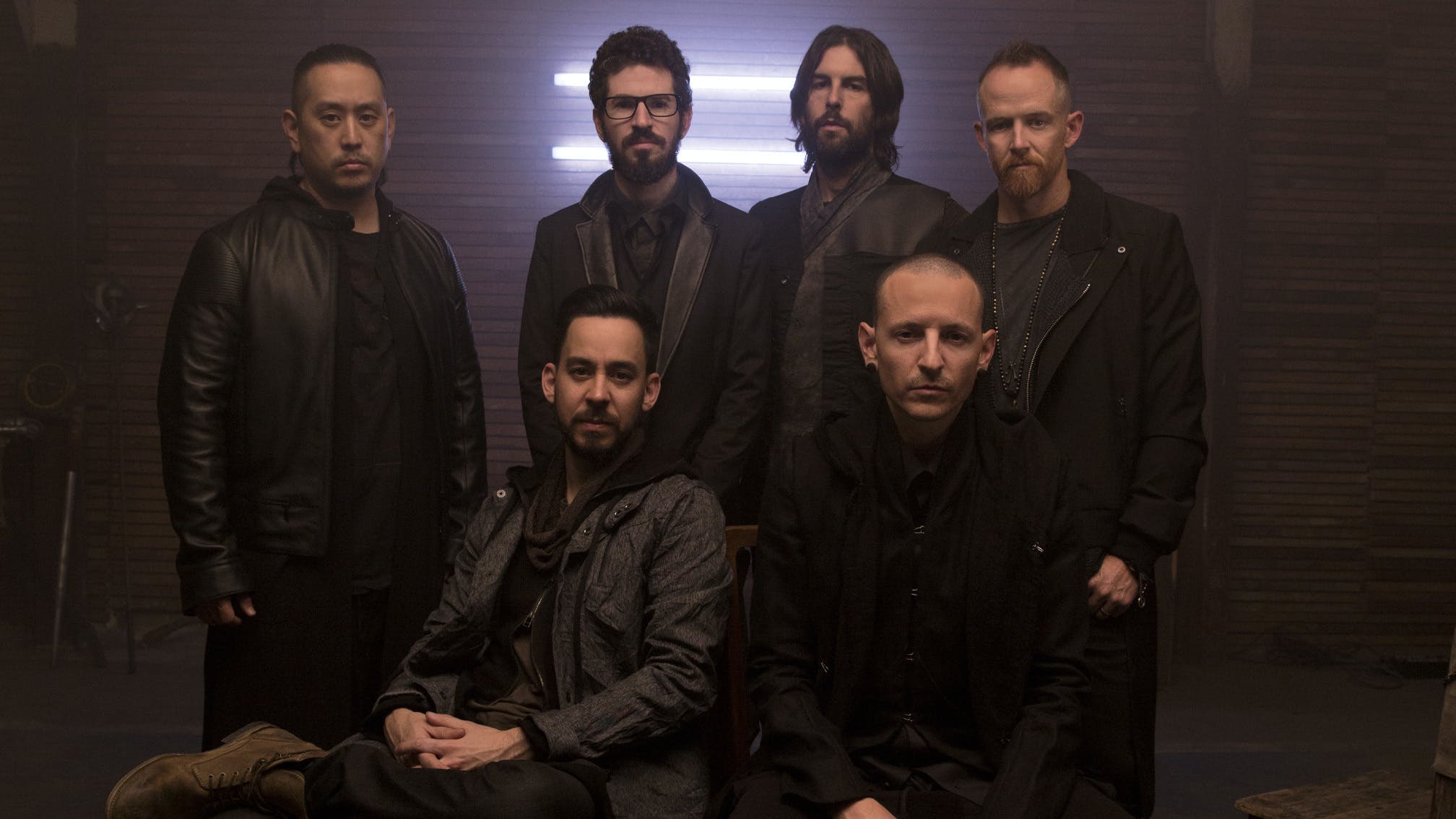 “We like to throw people through a loop when we put a record out,” Chester Bennington told Kerrang! with a glint in his eye. “Once people think they know what we’re doing, we’ll do something that’s not quite expected.”

Rarely have truer words been spoken. With Minutes To Midnight, A Thousand Suns and Living Things, Linkin Park had seemingly made a concerted effort to escape the bonds of rock and metal permanently. They’d flirted with it in recent years, sure, but hadn’t dipped in more than a toe for a sustained period in a very long time. That had, of course, been exactly the way they wanted it.

“We’ve existed in the alternative world for a long time, very intentionally, and we never really considered ourselves to be a metal band,” was Chester’s appraisal, before hammering the point home. “We always thought there was more to us than that.“

But now Linkin Park had returned with a vengeance, on a mission to rally against the mainstream, specifically what they thought was missing from it.

“Mike [Shinoda] was like, ‘Ah, fuck that, what would you think if we went this way?’” was Chester’s recollection of the conversation in which the two men discussed the dearth of guitar music on the radio at that point, and the distinct lack of bite from the stuff that did make it to the airwaves. “In rock music right now, stuff is very tame,” he elaborated. “It ranges from slow tempo to mid-tempo. [There are] a lot of radio jingle songs that sound like they belong on Nickelodeon or Disney. I don’t dislike that stuff when it’s well done, but there are times when I want something else, and if I can’t find that thing I want, I get frustrated.”

That frustration would lead Linkin Park to make the music they’d long listened out for but struggled to find, the kind of visceral, high-energy stuff Mike had on his Spotify playlist, ‘Yelling over guitars’, featuring the likes of At The Drive-In and Sick Of It All. Even the title The Hunting Party was chosen to reflect this search they were on and their desire to get out of the bag of this particular sound.

“We got so sick of bands trying to be other bands and playing it safe the whole time,” explained Mike. “So the album name comes from a theory about culture becoming too passive; everyone just standing around waiting for opportunities to come to join them instead of going out and getting them. I’m aware there are always going to be heavier bands than us, but The Hunting Party is Linkin Park going out and getting it for ourselves.”

With the band discussing their new album in terms of making the kind of racket that had pissed their parents off when they were children, some people began to describe The Hunting Party as a prequel to Hybrid Theory, a summary Mike found unhelpful, as it made it sound like it would be a conceptual precursor to their debut. “It’s a bit confusing,” he observed.

Having achieved so much since Hybrid Theory, you’d have thought there couldn’t be many firsts left for Linkin Park to achieve, but The Hunting Party proved otherwise. As well as being the first time they’d produced an out-and-out rock album in more than a decade, it was the first since 2003’s Meteora that they’d make without the stewardship of Rick Rubin (his last work with the band being 2013’s Living Things remix follow-up, Recharged).

Rick’s absence was a development to be recognised rather than celebrated, though it nevertheless meant The Hunting Party became the first Linkin Park album to be produced solely within its own ranks, with Mike and guitarist Brad Delson uniting to oversee proceedings. And last, but by no means least, it was the first Linkin Park album proper to feature guest appearances. The band had opened their doors, revolving ones, to a litany of artists on 2002’s remix album Reanimation, and 2004’s Collision Course saw them lock horns with Jay-Z. But this time they were welcoming others into their world unlike ever before. And not just anyone; they’d be joined by some of the most revered and influential figures on the heavier end of the spectrum.

First up was Page Hamilton from Helmet. The New York-based alt-metallers, whose albums included 1992’s Steve Albini-produced classic Meantime, had been an early reference point for Linkin Park. Being fans, as the band developed All For Nothing, a favourite of theirs with the working title True Chainz, they knew exactly who they needed to add bruising vocals and furious guitar.

The band further lucked out in the axemen stakes by securing the services of Daron Malakian and Tom Morello. Thanks to its breakneck pace and tribal drumming, Rebellion already resembled Toxicity-era System Of A Down, so it was only fair they have Daron along to add his unique speedy fretwork. But while Rebellion played to his strengths, Drawbar found Tom Morello making an uncharacteristic appearance. The histrionic fretwork we’d come to expect from the Rage Against The Machine and Audioslave guitarist was absent, replaced instead by a subtler turn that added atmospheric tones to the instrumental track’s sparse piano and sonic moodiness. The riffs were firmly in place on first single Guilty All The Same, however. It featured lyrics that, among other things, rallied against figures in the music industry (‘Radio and record companies killed me / Try to force me to strain and obey’) to illustrate the sort of things that got the older, wiser band fired up.

“What makes a 37-year-old angry is different than what made us angry back in the day,” explained Mike.

Chester would join the recording of The Hunting Party late on, but as excuses go, he had a good one. In 2013, Stone Temple Pilots had called upon his services, a dream come true for the singer who’d long considered the grunge favourites heroes. In May of that year, Chester would join the band’s three remaining members – brothers Dean and Robert DeLeo, and drummer Eric Kretz – for their first performances together, introducing a new song called Out Of Time. This incarnation would ultimately only release one record together, the EP High Rise, released in October in 2013.

“Dude, this is fucking awesome!” was Chester’s response to the new stuff Mike played him when he finally joined his bandmates at Larrabee Studios in North Hollywood, having finished touring duties with STP. He’d expected to hear dance-y material with a dark edge, but instead was presented with something that sounded like death metal by comparison. “I was really surprised by how heavy it was.”

Given the obvious joy Linkin Park were getting from the louder, punchier material as it was coming together, it was natural to wonder why it had taken the band so long to get back here. It wasn’t a question of reluctance, however. According to Mike, it was more one of fear.

“Before, we were kind of afraid to go all in,” he revealed. “Seven or eight years ago, we would have been scared to go ahead with a record like this. The time’s right for it now, and we feel really great about releasing it.”

As well as bringing the sounds they’d grown up with to the fore, the making of The Hunting Party reaffirmed the duality at the heart of Linkin Park, the relationship between Chester and Mike. Chester, who considered the band’s dynamic as “the most functional relationship [he’d] ever been in” was forever grateful for his friend’s firm, guiding hand when it came to holding down the fort, even when he’d been on the road with STP. He also considered Mike the man responsible for Linkin Park’s sustained momentum, and for having put out as many albums as they had.

“I know that by allowing Mike to be wherever he wants to be, when he wants to be there, he’s going to be reaching his maximum potential,” he praised. “When people ask me, ‘What’s the secret to your success?’ I say, ‘Mike Shinoda.’ You take him away, it doesn’t exist. I can’t say that for myself.”

Mike, who disagreed with Chester’s self-deprecating assessment, meanwhile appreciated the way in which his bandmate had allowed the genuine pain still plaguing him to be mined for the purposes of the art they made together.

“That is one of the most important things for our band to have,” said Mike. “When we write together, I’m trying to tap into that, as much as he’ll let me.”

“I think that as long as we’re doing something together it’ll always be really cool,” added Chester, turning his attention to the band as a whole. “There’s something special about the six of us coming together, and if you take away any one of these guys out of the band, of course it’s not going to be the same.”

The proof that people were eagerly awaiting Linkin Park’s return to heaviness came with the glowing reception The Hunting Party received. Reviews praised not only the album’s direction but the band’s generosity in giving the audience what they wanted as much as they’d excited themselves, recognising how it “delicately [navigated] the gulf between their own aspirations and a fan base who [celebrated] the band’s loud return to rocking hard”. Among its other plaudits, K! would include The Hunting Party in our 50 Best Albums Of 2014. The speed in its praise was countered by sales slower than they had been in the past; Lana Del Rey and Sam Smith would keep Linkin Park from the top spot on the Billboard 200, while U.S. sales wouldn’t hit the million mark for three years.

The very next day after the album’s release, Linkin Park kept things heavy by headlining Download for the first time since 2011, playing Hybrid Theory in its entirety and in sequence for the very first time. And while Chester had suggested the band were “kids” when they made their debut, Brad’s headphones, which were bling-ed up for the occasion, provided a tongue-in-cheek reminder of the megastar status they’d maintained in the intervening 14 years.

Despite Chester’s assertion that The Hunting Party wouldn’t be a brief regression to the unbridled rage of their early days, in the same interview he also suggested, “I kinda feel it’s who we are right now.” As it turned out, right now wasn’t to be as long as some would have liked. Ever the restless souls, the band had already started thinking about where to go next. And it was to be one that the fans who’d celebrated the harder Linkin Park presented by The Hunting Party would take serious umbrage with. In fact, their next move wouldn’t just send them in an opposite direction; it would catapult them a million miles away from it, straight into the light…