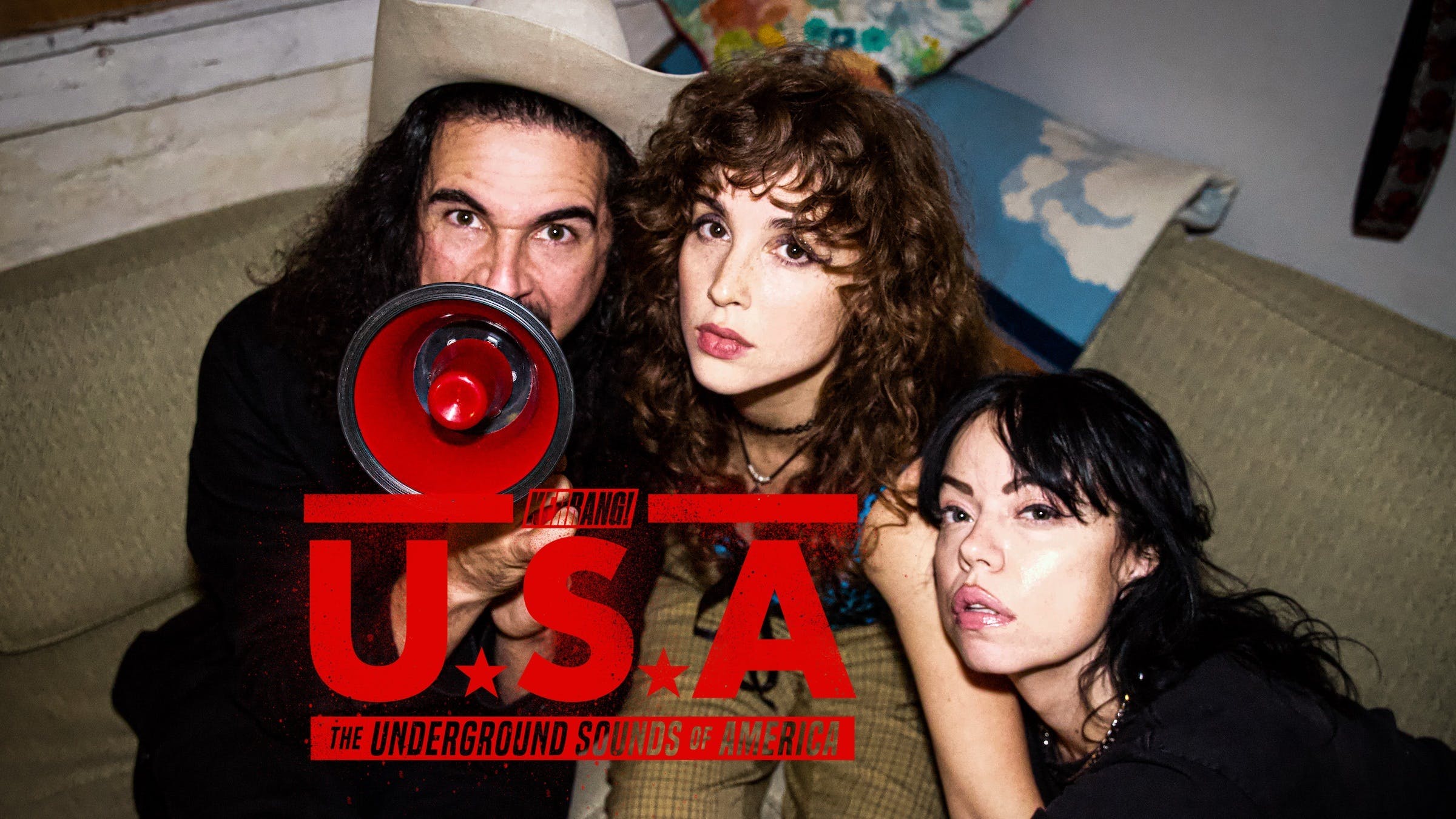 There’s no time like the present for Egg Drop Soup. Several aspects of the LA-based punk rock trio call back to eras long gone, from the riot-grrl drive behind their confrontational sound to the 1950s decor of their recent music video for the track Tots. But there’s also a modern frankness to the band that couldn’t exist in any other time than now, a gleefully-engaging sleaze and attitude that can cackle at toxic tropes without having to hide its real message for the sake of anyone else’s comfort zone.

“There's so much music out there that it's hard to make a blanket statement about all rock and punk,” says lead vocalist and bassist Samantha Westervelt. “We do find though that it’s still this novel thing to be women playing raw, rage-y music in a band. There are definitely some amazing bands around the world doing some pretty cool stuff! Some of our current favorites are Surfbort, Deap Valley, Amyl and the Sniffers, Death Valley Girls, The Paranoyds -- the list could go on! But by and large, we still find that men ‘dominate’ the scene, and we strive to be a force that provides balance in an otherwise skewed musical world.”

The band’s latest three-song EP, titled PMS, shows off both Egg Drop Soup's plucky energy and their exhaustion at the bullshit of the world. The tracks thereon are thrumming, hypnotic examinations of life for the everyday outsider in Los Angeles. More recently, the trio filmed a video for their single Tots, which features Sam and guitarist Olivia Saperstein as polished 1950s homemakers who then vent their frustration on their carefully-built desert. For Sam, the setting was a powerful statement, while the destruction of the cake was just the cherry on top.

READ THIS: Girls to the front - 25 years of Bikini Kill and riot grrl

“The 1950s was such an era of propriety for both women and men,” she says. “Gender, beauty, and social norms were at such a peak then, and have pervaded since. We wanted to take those norms and literally smash them! And what better way to do that than a cooking show? And YES -- [destroying the cake] was so incredibly satisfying. We highly recommend.”

Mad as hell and unwilling to take it any more, we asked Sam about Egg Drop Soup's distinctly awesome take on punk.

1) Who would you say are Egg Drop Soup's five biggest musical influences?

We have SO many! But to name a few: Nirvana, Black Sabbath, Hole, Motörhead, PJ Harvey, and Queens of the Stone Age.

2) If you had to play a newcomer one Egg Drop Soup song to introduce them to the band, what would it be and why?

From what we‘ve released so far, we’d probably have to say Tots, but we have a track on our EP out this summer, Hymen, that also encapsulates our particular punk vibe and really gets to the core of our overall feminist message.

3) Do you feel like being from LA informs your music, and if so, how?

It’s interesting because although we’re based in LA, none of us are actually from here. Sammy grew up in Louisville, Kentucky, and Olivia and Greg grew up in Boston. So definitely there is a lot of different stuff informing each of our perceptions of LA, which absolutely informs our music. There's a dichotomy here -- it’s this epicenter of art and entertainment, which can lend itself to a lot of freedom of expression. On the flip side, both here and in general, there can be a lot of pressure to play by the rules, and there’s this societal degradation you’re constantly being confronted with as well. For us, we choose to rebel against those rules and norms, and put a magnifying glass to what we’re pissed about. Are we analyzing it? Yes. But are we also hoping to burn it up a bit with the LA sun? Absolutely.

4) What's one time something went terribly wrong or miraculously right for you at a show or on the road?

On our last tour, we had several obstacles we had to overcome to make it work (but yay! It wound up being the best!) There was one night in particular, this show in Philly. We’d driven nine hours to get there, didn’t really know too many people there, and the record store where we were playing had a very strict noise cutoff and 'rental' deal. The first band was half an hour or so late going on, played one or two too many songs, and that just set the pace for the rest of the night. We were nervous they’d cut off the show before we had a chance to play, and even more nervous we’d have to front money out of pocket for the venue. Regardless, we were determined to give it our all and have fun, no matter what happened. But miraculously, a bunch of people showed up, and everything worked out! We got to play our whole set, we more than covered their door deal, plus people stayed for our set AND bought merch! It really was such a great lesson in keeping a positive mindset, and we LOVE Philly.

There was also this time in Albuquerque that a show got cancelled due to a toilet that overflowed and tripped the fire alarm. Don’t have to get in too deep on that one, but suffice it to say -- shit happens!

5) How did you guys come up with the cover for your PMS EP? Have you made squeamish dudes uncomfortable with it?

That’s such a great story. So many people think it’s staged, but actually I was borrowing Olivia’s leggings during a show one night. I had my period and forgot to swap out my tampon before playing, and during the first song of the night as I screamed the first 'I WANNA BE ALONE!' in the song Partying Alone...well, let’s just say there was some major leakage. But the show must go on! So I kept playing. After the show I got off stage and of course there was a stain. I showed Olivia, who was momentarily horrified that I’d stained her leggings, but recovered quickly with a, 'Let me take a photo, this HAS to be our cover!' A moment of genius for sure!

We’ve actually been surprised at how many dudes LOVE the shirt and rock it with pride. It’s cool that something so stereotypically in the shadows (as many women’s issues are) gets some light shed on it -- all because I forgot to change my tampon. PS -- the stain came out.

Catch Egg Drop Soup live at one of the following dates this year:

READ THIS: 13 albums to kickstart the revolution