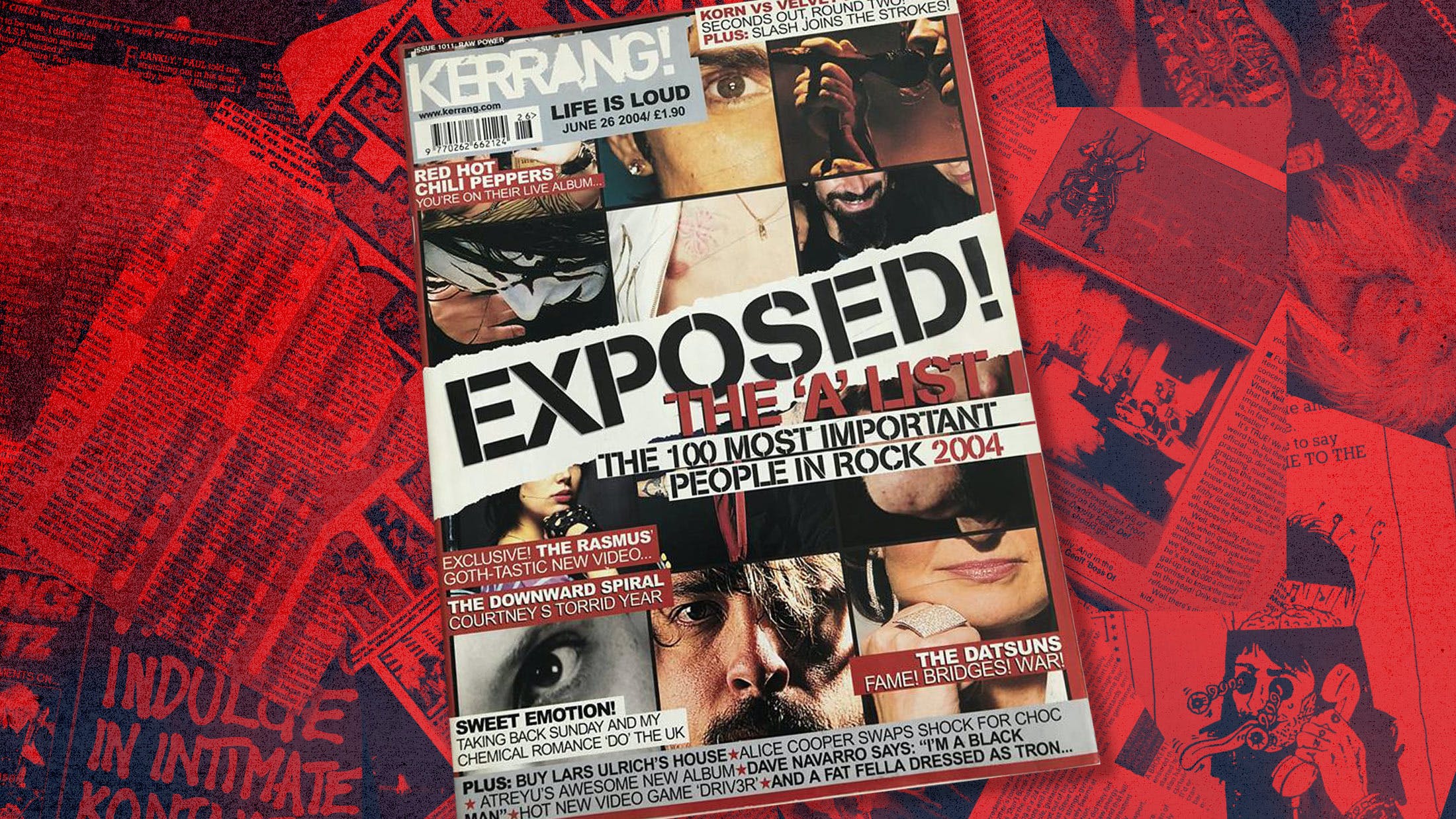 A mere seven days since we last did this, here we are again, to the surprise of probably no-one. Unless you don't understand how the concept of a week works, in which case… damn. Anyways, welcome, to another installment in our series of retro-soaked pisstakery and finger-pointery, This Week In Kerrang! History.

This time, we're squinting eyes in the direction of and shining a figurative torch in the dusty old attic that is June 2004, when we reckoned it was time to decide who were the 100 most important people in rock. That or we didn't have any better ideas about what to put on the cover that week. Either way, such a timestamp of endorsement in the world of alternative music was absolutely never going to make us look like pillocks years later. No way. After all, rock stars are renowned for their excellent behaviour and reputations…

June 2004, then. Doesn't sound that long ago, does it? Except it really does when you consider that was the first summer that Donald Trump was saying, 'You're fired!' on U.S. TV and pointing his finger at something other than Twitter and saying brain-wrong things and over-using exclamations like he's permanently surprised by his own ability to make it to the end of a sentence!

Enough of that, let's get to it.

Here we begin with this charming image of an unidentified bare bottom that was seen residing in our contents page. Oh, and it also had pride of place overleaf on our feedback page. As long-time readers of This Week In Kerrang! History might remember, we bloody loved showing exposed arses in the pages of the our magazine back in the day. Maybe we should get back into that. Let us know…

Here we are bigging up our exclusive behind the scenes access on the set of The Rasmus' latest video for upcoming single, Guilty. You might not recall the name The Rasmus now, but rest assured they were hot shit for a few minutes back in 2003. This was 2004, though. Oh well.

The year before, the Finnish goth sorts had that one big hit with the 'whoa-oh-oh-oh' bits in and then they slowly slid back into, erm, the shadows. Or so you'd assume, but the internet tells us they are still releasing music, so fair play really.

Here's that one with the 'whoa-oh-oh-oh' bits for old time's sake. It's had over 38 million views…

A cute little bit of early internet-meets-print interfacing right here. Remember this guy? The Tron-suit guy? Here we are having a word with him about making his very own suit and finding him to be a really nice lad. "I'm somewhat overweight, as you see," 43-year-old Minnesota native Jay Maynard told us, "One drawback of wearing spandex is that it does nothing to hide one's obesity"

He'll always have this though:

And in the realms of 'education', for some unknown reason, here we were furnishing our dear readers with random shinfo to make everyone better at pub quizzes or something. Like a proto-attempt at Wikipedia, minus the annoying guilt-trip ad getting in the way. Did you know that the average office desk is basically dirtier than a toilet? 2018 us did not and we'll be thinking on that the next time we're eating lunch at our desk.

Big ups to former Killswitch Engage vocalist Howard Jones for correctly picking out 36 Crazyfists' excellent A Snowcapped Romance as an album that everyone should listen to.

"I really like it," Howard said. And "They're a really great band," he concluded.

There were other such riveting soundbites in between.

We were putting our critical weight behind emerging Swedish genre-fluid but sort-of-metal sorts, Burst. Ever heard of 'em? They were quite good, actually. You should listen to them.

"Civilisation is going down the fucking drain," grumbled guitarist Robert Reinholdz, quite presciently. He must have caught the first few episodes of The Apprentice.

Sign of the times time: this, um, time, focussing on the 'fuck me, that's very 2004' classified ad for 'wind up calls!' whereby you'd apparently stitch your mate up by loading their number into a computer, it would dial them and a pre-recorded message would pretend to be various nonsenses. And it would only cost you £1 for every minute you were listening in on "irate delivery driver" or whatever it was you reckoned would be hilariousest. As if anyone ever stayed on the line longer than a few seconds. Absolute guff.

Bored of where you're living? Not enough room to swing the proverbial feline around in? Check out how the other half live. In 2004, Metallica drummer Lars Ulrich put his house up for sale. It was a swish piece of real estate, too. Boasting a frankly excessive and unnecessary 28 rooms, a swimming pool, basketball court, wine cellar and studio, the Tiburon, San Francisco digs would have set you back a cool $9,999,999. Just think: some lucky bugger is living there right now bored out of their skull and wondering what next to spend their bottomless pit of cash on.

To reviews then, where we were promising to filter "the dog's bollocks from the plain old bollocks" starting with Atreyu's breakthrough second album, The Curse, which we awarded 4Ks and said helped the surly Orange County lads retain "their identity and their credibility", comparing the transition from their debut to a similar stylistic evolution undergone by in our own homegrown emo-ish sorts, Funeral For A Friend.

Speaking of all things to do with the big 'e', here is a live review of My Chemical Romance in Manchester. "There's passion, charisma and, perhaps most importantly, a clutch of fantastic new songs" we said, impressed by their headline set as the New Jersey natives promoted their then-freshly released Three Cheers For Sweet Revenge record. Little did we realise just what a phenomenon we had just witnessed being born before us.

It perhaps puts that into greater retrospective focus when you consider that we led that live review section with this summary of Taking Back Sunday's show at The Astoria. Admittedly, they were the bigger band at that stage and this was their first ever visit to London. Madness, nevertheless. We also printed the double page review sideways for reasons that only the good folk at K! Towers 2004 would know.

Our cover feature then. The 100 biggest bigwigs in all of the rocking and rolling bigwigs of 2004. And here's a little taster of what that meant back then, with this rundown from 82 to 73 that included the likes of genius music video master Spike Jonze, one-hit novelty wonder Liam Lynch, the questionable as fuck inclusion of Burzum beardy Varg Vikernes and TV presenter, David Letterman. A mixed bag, you'll agree. Oh and Goldfinger and production don John Feldmann was in there, too. Because even back in 2004, Feldy evidently had his fingers in a lot of tasty, tasty rock pies.

Feldy wasn't considered as important to the world of rock and metal as the League Of Gentleman character Papa Lazarou though.

"A cross-breed of Marilyn Manson, Nosferatu, Keith Richards and your creepiest uncle," we reckoned.

Awwww, look at how baby-faced Joel and Benji Madden were. The Good Charlotte twins were also not deemed as important as Papa Lazarou. What a world.

Look at this! A time-capsule and a half list of people we thought were bellends, seemingly. All of whom, you guessed it, weren't as important as Papa Lazarou. Poor Ainsley Harriott. What the fuck did he do to piss the K! team of 2004 off so much? Dude was just busy trying to cook some good dinners, flog some Fairy Liquid and get on with being a generally pretty harmless and loveable telly rogue.

'But who was top of the 'A' list?' someone reading this atrocity might have faintly wondered in passing at some point. Well, here you go. It was Mrs O, Sharon Osbourne. Which makes a hell of a lot of sense, actually, given that she masterminded Ozzy's career for over two decades, bossed her own management company, helped a bunch of metal bands get a leg-up on Ozzfest, proved what a force of nature she was on MTV smash hit The Osbournes AND she beat cancer. We certainly wouldn't mess with her.

And that was June 2004, really. A strange time, all things taken into consideration, eh? Still, always good to take stock.

So maybe we'll be back next week with another peek into a Kerrang!-shaped rock past. Fair warning.