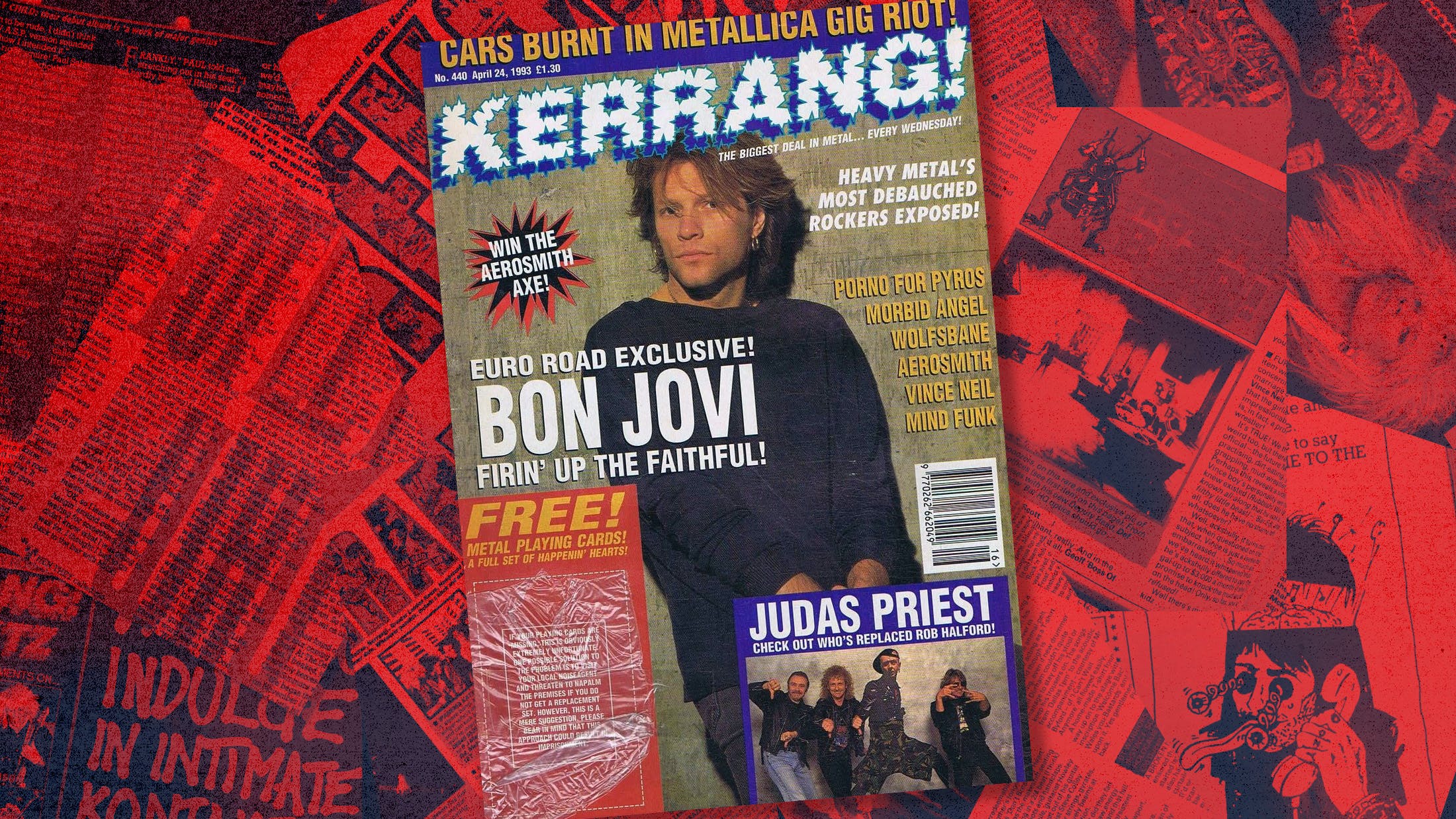 April 1993 saw some crazy shit go down in the world, dear reader.

There was a tense, 51-day stand-off between the Branch Davidians and U.S. federal law enforcement in Waco, Texas, which ended with a blaze that claimed the lives of 76 people, including cult leader, David Koresh. Rather worryingly, tuberculosis was declared an official global emergency by the World Health Organisation. And there was the sight of Manchester United manager Alex Ferguson and his assistant Brian Kidd joyfully leaping around on the Old Trafford touchline thanks to a result that would propel the club to its first title in 26 years, kickstarting a period of domination for much of the next two decades.

In Kerrang! 440 (on shelves April 24, 1993) we weren't too concerned with any of that though. We had a huge interview with Bon Jovi to shout about, didn't we? We also, inexplicably, featured the bare bottoms of at least two chaps that week. But we'll get to that in due course (Butt we'll get to that? No. No. Absolutely not).

First up, check out this gnarly photo of Alice Cooper doing something gnarly to one of his gnarly-looking stage mannequins. At least, we hope that's a mannequin, otherwise the poor lass is / was in a very bad way indeed. Still, we thought it fitting to accompany this image with a really rather serious quote from the great man opening up about his addictions. Oops…

Bare arse #1 klaxon! Here we have Mr Ozzy of Osbourne being a naughty boy onstage, flashing his buttocks for all to see. 'A man who perpetually plays ping-pong with insanity' we said. It was all part of our investigation into the most debauched characters in rock. Yeah, fair.

So, you know how Kerrang! famously rates everything on a scale of K to KKKKK? Apparently in 1993, we didn't think to apply that to our live reviews so we kame up with this krazy koncert kwota instead. It was A Different Time.

Speaking of scoring systems, in 1993 we produced the above guide to what each rating actually meant - the Kerrang! Kritiks' Kode Of Kondukt. Big ups to us for the lesser spotted use of kodswallop. We can only assume that Aerosmith were absolutely made up by scooping four kookin' Ks for their 11th album, Get A Grip.

Not half as chuffed though as Rob Halford and the Judas Priest lads must have been when they opened up this issue to discover they'd hit top marks for their Metal Works '73-'93 anthology, which we declared "the heavy metal album of 1993 and make no fucking mistake"…

Eagle-eyed fans of This Week In Kerrang! History (shhh, let's pretend we've done more than one other so far) will recall how our last flashback to an issue 30 years ago picked out hair rockers Warrant as a hot new band on the scene worth paying attention to. While history may not have been so kind to them, we weren't all wrong. Here, a few years and many more millions of records later, is singer Jani Lane passed out on the band's tour bus, wearing a Warrant cap. This image accompanied the news that he had just left the band to pursue a solo career. Though he would of course return again later that same year in September.

8-page Metallica-themed poster special? Yes please and thanks very much.

Want a sign of the times? How about this Metal Briefs guide to Kurt Cobain, a year before the Nirvana frontman's untimely passing, in which we decreed that his band were better than Boston (listen to Smells Like Teen Spirit and More Than A Feeling, if for some reason you need context on that one), referred to him and Courtney Love as a "cute couple" and foolishly dismissed Dave Grohl and Krist Novoselic as "a couple of mates" who "stand in the background"…

Before the days of Jeeves and Bing, people had to actually read and learn things to gain knowledge. Crazy…

So, back then quizzes were all the rage. And Kerrang! was no different. How did you find out if your answers were right or not? You turned the magazine upside down, didn't you! That's where we'd print the correct ones, elsewhere on the page. This did of course mean you could just cheat, but you'd only be cheating yourself. And people were a lot more honest back then. Presumably.

Fancy another sign of the times? How about this classified advert for membership to the 'official' UK fan club for KISS. It all looks a little suspect in retrospect, however. Essentially, you'd send £12 to KISS CRAZY in North London and hope for the best. That's £15 if you were based overseas, though why you'd want to be in the UK club if you were from Bulgaria or something, is anyone's guess. It's not clear what you get for your money either, but such were the risks involved in those days. Maybe the advent of Jeeves et al wasn't such a bad thing, after all…

And so to our world exclusive cover feature with Bon Jovi. We joined the superstar rockers on the road in Milan, where they were promoting their latest album, Keep The Faith. We found frontman Jon Bon Jovi in quite downbeat and tetchy form, alas, bemoaning his band's apparent lack of scene love and respect, as a result of their enormous commercial success. He needn't have worried about that too much, because that album sold truckloads of copies as well, even if he never did quite get that elusive acceptance.

And that's the price paid for riding the wave, friends…

Check out this pic of drummer Tico Torres bashing the life out of his kit, with a brilliant caption that requires no further comment really. Think about that the next time you go see the New Jersey behemoths live. And just watch you don't get your ass kicked.

And on that note, here's bare arse image #2! There's no real reason for this one either, apparently, other than a slim excuse to use the phrase 'bare all' in regards to Iron Maiden bassist Steve Harris chatting about Bruce Dickinson's recent departure from the band. Once more with feeling: it was just a different time.

They were halcyon days.…

Come back next week for more of this madness…