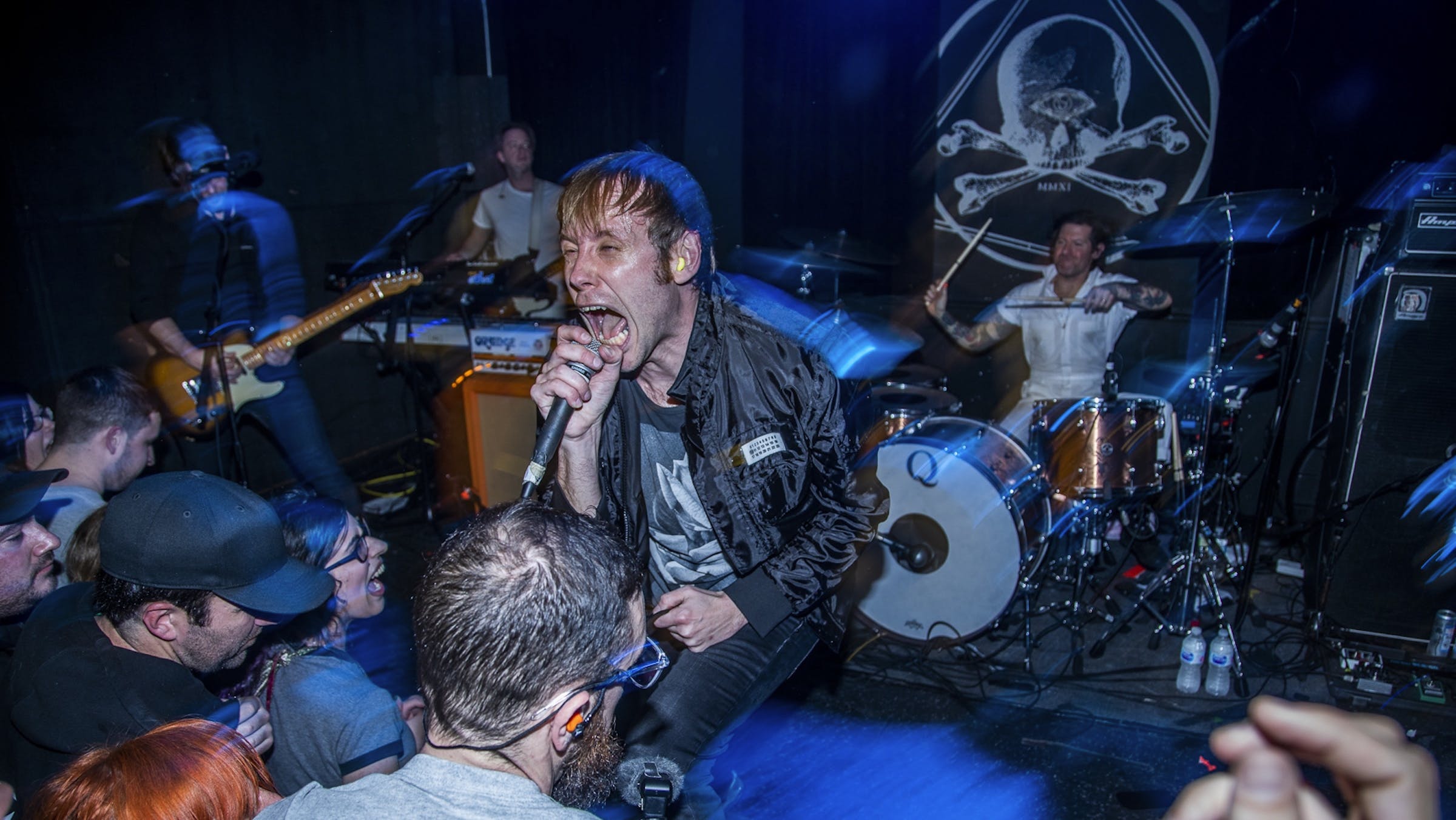 There’s barely room to move in Brooklyn’s Saint Vitus Bar, let alone breathe. The people in the small box-shaped venue are crammed and crushed, and there are more – many more – beyond its entrance in the bar that leads to it. Necks crane for a better view. Elbows jostle for position. Soon, sweat will be soaking into the clothes and jackets of everyone present.

Tonight is Thursday’s third night of a three-date residency here, but it’s more than that: it’s the end of a grueling touring schedule that began at the start of the year, one which largely saw them play 2001’s Full Collapse and 2003’s War All The Time in full on alternate nights...and it’s also the end of an era. This is, allegedly, the last gig the New Jersey band will ever play, ending the reunion that began at the Wrecking Ball Festival in Atlanta on August 13, 2016, after the band called it quits on fairly bad terms in 2012.

Before that final sendoff, however, it’s up to a support act listed as Young And Doomed to open proceedings. In actual fact, it’s a secret set (and the first ever gig) by Frank Iero’s new band, The Future Violents, who just so happen to feature Thursday drummer Tucker Rule behind the kit. And if you thought Tucker would maybe take it easy before playing with the headliners, you thought wrong: the band storm through a rip-roaring, rough-housing set that opens with the untamed chug of brand new track Young And Doomed, and stampedes along into other songs from their forthcoming new album, Barriers, as well as older tracks from the previous two incarnations of Frank’s post-My Chemical Romance solo career.

Frank himself is as confident and wild as his music, which fill the room with a deliberate and decadent sense of raw, unease. It’s a beautifully powerful introduction to the next phase of his career.

Thursday’s end begins with a scorching run-through of For The Workforce, Drowning, the first track from War All The Time. And while the majority of the set does come from that record and Full Collapse, neither tonight or the two nights before it are album shows. They’re celebrations of the band, of their career, of their reunion, of what the music they’ve made means to the people who love it and who have always loved it.

Vocalist Geoff Rickly is in typically fine form, taking control of the room while also becoming seemingly possessed by the songs. He leads the crowd through the ebb and flow of Autobiography Of A Nation, watching as the audience surge as the song sails and soars to its climactic ending. It’s an intensity – both onstage and off – that’s repeated throughout the band’s hour or so onstage. A Hole In The World, Steps Ascending and Division Street are slow-motion explosions – of emotion, of history, of friendship, of turmoil – while Cross Out The Eyes feels just as vital and important and urgent onstage today as it did on record some 18 years ago.

The gentle strains of This Song Brought To You By A Falling Bomb and, later, War All The Time, both provide a brief respite from the frenzy, but are no less dramatic or powerful than the louder numbers. While the sing-alongs throughout are whole-hearted, it is, of course, Understanding In A Car Crash – introduced by Geoff as the closest the band ever came to having a hit – that gets the biggest one, with the crowd throwing all the song’s energy and emotion back at the band with joyful abandon. For those few minutes, it doesn’t matter what Geoff is singing, just that he is there, that the band are still here now, even if it’s just for another couple of songs.

A ferocious version of Jet Black New Year – the band’s usual set closer, and the song that rounded off the previous two nights – is followed by Stay True, the last song from the band’s last album, 2011’s No Devolucion. It’s a snaking, heartfelt performance of a snaking, heartfelt song, one whose layers of intense instrumentation, coupled with Geoff’s pleading screams seem to reach back in time, the whole history of the band unfolding in the room as broken bodies drenched in sweat and voices screamed to a whisper get lost in its magnificent crescendo. There’s a palpable sadness when it’s over, but it’s not one that overshadows the joy of the night’s experience, not the sheer thrill of existence that it so clearly has evoked in everybody watching.

“We made it through three months of tour,” chuckles Geoff a couple days after the final gig, “and then those three nights killed me. I think your body knows when it’s time to give up. Getting to sleep in my own bed and then go and play these little shows, it was a little bit like I tricked myself. And those shows were so small that the energy just got compressed into this little room, where it’s just absolutely nuts – it’s twice as hot, twice as close. During the second song of the last show, somebody was really singing along but with a closed fist and ended up decking me in the chin. I have this big bruise on my face!

"But also, because you know it’s the end, you don’t save anything," he adds. "You just kind of say ‘I don’t have to keep my voice after this. I don’t have to not be tired’ and you spend everything you have left.”

Geoff Rickly discusses the life and times of Thursday, heroin addiction, recovery and the potential return of No Devotion…

Emo-hardcore legends Thursday will open for MCR at their upcoming reunion show.

It looks like Frank Iero will have a familiar face on his upcoming U.S. tour: Thursday frontman Geoff Rickly.

PLUS! Andy Black, While She Sleeps, Alexisonfire, Don Broco, A Day To Remember, Avenged Sevenfold, Rammstein and LOADS more!

“An exploration of the lives of musicians and artists, and the way they have dealt with health, trauma and other issues.”

Post hardcore heroes ​Thursday have announced they'll be performing their classic albums Full Collapse and War All The Time at some special shows on the West Coast to celebrate 20 years as a band.