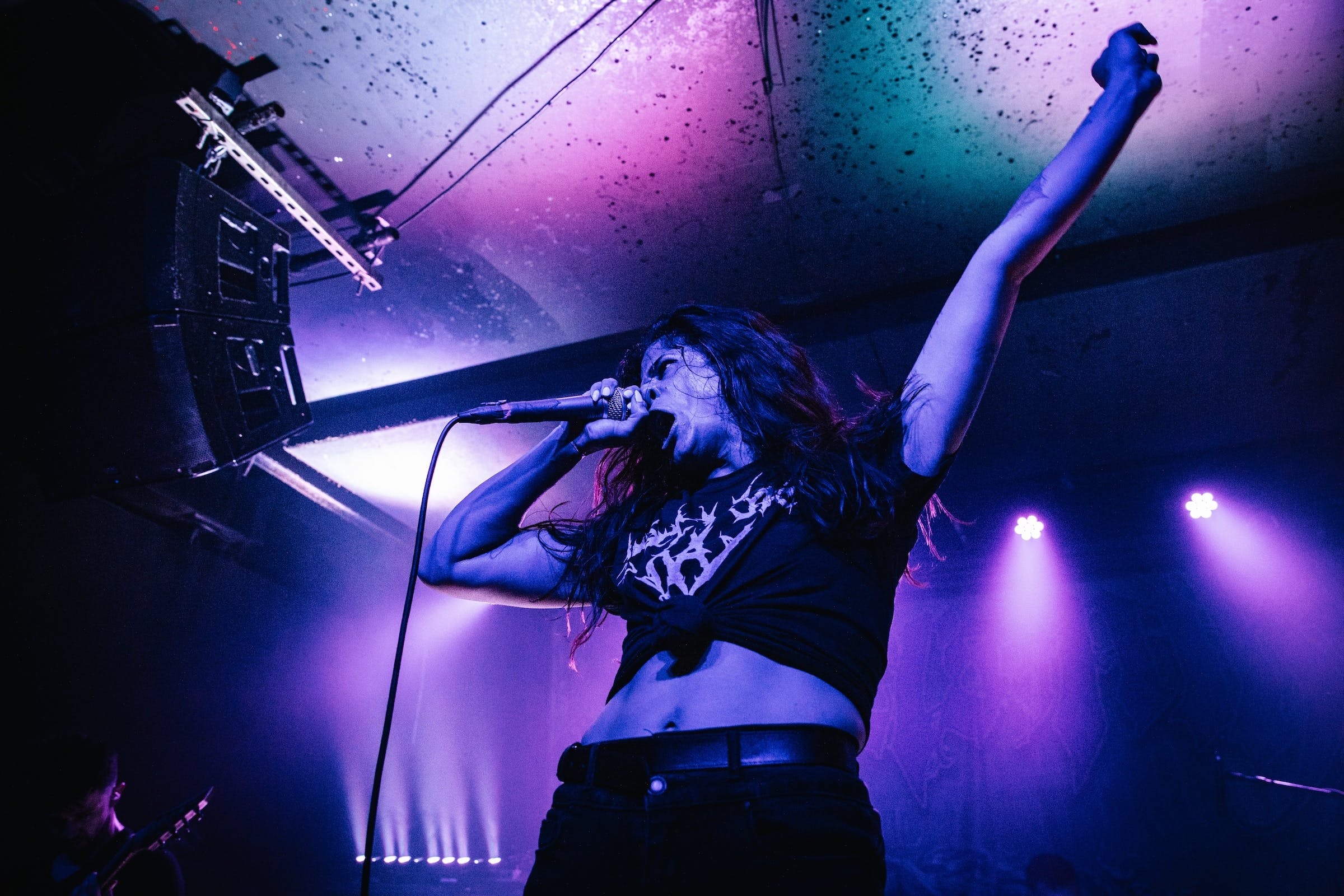 Of the bands on our Kerrang!-sponsored tour with Rivers Of Nihil, Conjurer, and Wolf King, arguably the weirdest were Californian tech-death stars Entheos. While the other acts on the bill play with blared, to-the-point rage, Entheos's music sounds like a maze being bored through the brain of a robot. With crunchy bass, Lovecraftian guitars, whirlwind drumming, and snarling industrial-tinged vocals, the band stood apart from the night's line-up with their uniquely unorthodox and mind-bogglingly acrobatic sound. When they took the stage, we had no idea what to expect...and walked away knowing little more than that we fucking loved it.

Bathed in purple-lit smoke, the Santa Cruz quartet brought a hailstorm of blistering tech-death to the otherwise unhinged evening. The band sweated their way through a tense, brutal attack brimming with unpredictable fills and grinding, electronically-influenced bass lines. Throughout it all, vocalist Chaney Crabb leapt around the stage and shrieked at the crowd like a woman possessed, interspersing her rabid vocal performances with grinning bouts of positive banter and appreciation for her audience.

Want to experience the bedlam of this set -- a performance of their entire latest album, Dark Future, in its entirety? Head to the Kerrang! Facebook page tomorrow at 7:30pm GMT/2:30pm EST/11:30am PST and watch our stream of Entheos’s crazed live show.

Still on the fence about streaming the show? Here’s a little preview from our photo gallery from that night:

Describing the distillation of their sound when Entheos was featured in our Underground Sounds Of America series, Chaney said, "I can’t say that we’ve ever looked at how ‘brutal’ or ‘metal’ we are as being a primary emphasis of writing music in this band. In fact, we don’t put many restrictions on what genre we’re adhering to. I think that comes off fairly obviously in other parts of our music, outside of the electronic passages. Our music definitely has its heavy moments, but it isn’t a constant.

"Our main concern in writing is always the song in itself — what sounds right, and how everything works in a cohesive, dynamic way," she continued. "The only time we pull things back with any instrument or layer is if we feel it doesn’t work well within a certain context.”

The Underground Sounds Of America: Entheos

The California progressive metal outfit would push genre boundaries -- if they had any.