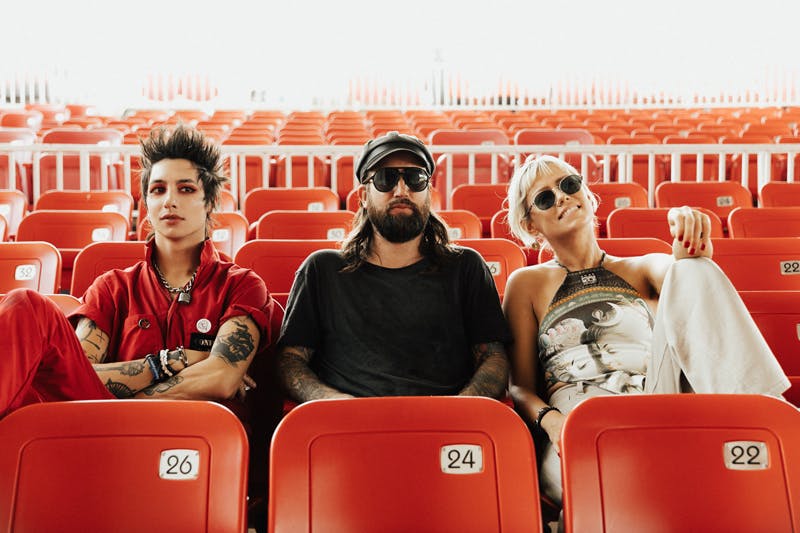 Tomorrow, Warped Tour rolls through Cleveland, Ohio for one of only three dates in 2019, having ceased being a summer-long affair travelling all throughout the U.S. and Canada last year. Warped, as we used to know and love it, is no more, but that's no reason not to celebrate a quarter of a century's legacy.

It's no exaggeration to say that Warped Tour has helped put countless Kerrang! stars on the map. Without Kevin Lyman's annual summer roadshow, bands like My Chemical Romance, Fall Out Boy, Paramore and Black Veil Brides simply would not have had the impact, influence or success they've had. Without Warped, some may not have even made it beyond their first few shows.

Where else would you find Every Time I Die's Keith Buckley, Tonight Alive's Jenna McDougall and Palaye Royale's Remington Leith hanging out and shooting the shit? Outside of Warped Tour there's little else that unites these bands, with each vocalist's entry point, experience and insight being very different. Each represent a different generation of Warped, embodying its spirit of inclusiveness and diversity. So what better excuse to sit them down and grill 'em all about their experiences on the final full-summer run in 2018, and what the absence of that staple from the rock landscape might mean long-term...

What do you remember about your first Warped Tour?

Keith Buckley (Every Time I Die): "I was super-young when I went and I was really intimidated by everybody, but when you walk into that magical realm you're like, 'Well, this is where I need to be for the rest of my life.' I didn't mean that literally, but now I feel like I have been doing this for my entire life!"

Jenna McDougall (Tonight Alive): "I was a Warped Tour fan by correspondence. Being from Australia, we didn't have the chance to go as ticket holders, so it was even more far-out as 20-year-olds to go over fresh out of high school and play it. Having said that, I actually don't remember anything about playing our first Warped Tour, because I was so young and starry-eyed!"

Remington Leith (Palaye Royale): "I can count on one hand how many people were in front of our stage every single day the first time. Then we ended up playing to huge crowds who know our lyrics. Warped Tour helped us really expand our audience. In 2014 we got a chance to play one show because we won a battle of the bands - we played when the doors opened and it was the coolest experience of my life."

It seems like there might be fewer opportunities for bands in this scene to get their names out there now. What do you think can replace Warped, if anything?

Keith: “I don’t know, but I think it’s going to open up a lot of opportunities for bands to start headlining their own tours. Warped was such a godsend for bands like us. I feel like it’s gave us longevity. But I really think people in bands are going to be able to branch off and do some really cool things they wouldn’t have normally done because they would have just counted on Warped Tour to get it done for them. But you know, you’ve got to leave the nest and you’ve got to forge your way.”

Jenna: “That’s a nice answer. I think people are going to unite more. It’s almost like a free-for-all going to Warped, even though there was that level of understanding that everyone shared about being an outcast and a rebel and how being attracted to punk music we all resonated with similar ideals, but at the same time I don’t know how much sense of unity there was. I don’t know how you guys feel about that?”

Keith: “I definitely agree. I think it was very, very competitive out on Warped. Everyone was under the same roof, but you were fighting for scraps – you’ve got to sell the merch and you’ve got to get the crowds and you’ve got to really compete with bands you’re playing against at the same time or whose hometown it is. All these factors come into play. It’s a family, but like siblings there’s rivalry. So I think more unity will come as a result and bands will find out where they fit in and with whom, and who they’re willing to take out on tour. I think it’s going to be a good thing.”

Was Warped as gruelling as people say it was?

Keith: “This is going to sound hyper privileged and I don’t mean it to, but I don’t think people understand how difficult it was to do nothing while on Warped. I’m in a band because of my work ethic – I need something to do all the time. But on Warped Tour everything was almost taken care of for you and you don’t have to do anything except play for that half hour, and it is absolutely fucking gruelling to sit there with nothing to do it. I fucking hated it. And then you'd just crack a beer because it’s like, ‘Why not? I have nothing else to do!’”

Jenna: “It’s a pretty unnatural environment, to be honest. To be around loud music and in bright sun and intense humidity surrounded by tens of thousands of people in a parking lot is super draining. By 5 or 6pm I’d be ready to watch reality TV in my bunk.”

Remington: “It’s very fucking gruelling. I don’t know if anyone else feels like this, but playing regular festivals, it’s like one, two or three days tops, but for Warped we'd have 21 days straight in a row without any breaks. Two or three days into that long run of shows and I’m fucking exhausted.”

Keith: “Dude, I'd just feel it in my bones. Everything aches. It’s tough.”

Remington: “Yeah, and it’s not even the performing part. It’s literally like you said – the sitting around waiting and doing a two hour signing and then doing press and workshops, so it’d be like a full day. You'd start right when you wake up and then by the end of the day you can finish.”

Keith: “And the lack of good sleep really takes its toll on your mental capabilities. You’re constantly sleeping in a moving coffin that has no natural light coming in ever. You don’t see natural light to wake you up, so your biorhythms would be completely off all the time. And I’d constantly be tense in my sleep waiting for the bus to swerve off the road or hit the rumblestrip, so I'd never actually fall asleep. I'd just wind up hallucinating!”

Where do you think your band would be without Warped Tour?

Keith: “I don’t honestly know that we would really be around. We did it consistently every other year at the time we’d put out a record, so it was always that initial rocket thrust for us into the tour cycle – we put out a new record at the beginning of Warped Tour and all these new kids come and see us, and then they come see us when you come through the clubs following on from Warped Tour and then we just keep doing that until it dwindles out and we get the next boost from the next Warped Tour with a new record. Hopefully our club life has as much stamina as our festival life, but we’ll see. It’s scary, but it’s cool.”

Remington: “It definitely helped us when we put out our very first record – it was one of the reasons we got so much traction in the first place. But the thing about our band is that we’re never off the road. I think I’ve spent a month home in the past few years. So, I don’t think we’d be as successful as we are right now without Warped, but I think we’d still be touring our asses off and trying to get as much traction as possible.”

Jenna: “I think Warped Tour presented the opportunity for people to stumble across and connect with you. It’s not just that they were seeing you play a set by accident – they could come to a signing or a workshop and I think that was a really cool opportunity for people accidentally fall in love with what you were doing. But I think it was a make-or-break situation with Warped, because it could burn you the hell out and you have to love it to do it.”

Warped allowed fans to get close to the bands they loved. What does the fact it’s ended mean for those kinds of connections?

Jenna: “I think Warped ending will be a catalyst for the future. I think something really good will come out of it. People are going to realise, as Keith said, that things aren’t going to be so easy. People are really going to have to fight and – I don’t know, this is just an idea – start new record labels and create these little pockets. I think something will take its place. Because fans won’t give up that opportunity to feel connected to the bands that they love.”

Keith: “I agree. I think that people are just going to have to get more creative with how they market themselves. You don’t like to think that punk rock and hardcore and all this music is a brand, but Warped Tour is and if you’re on it, you’re part of that brand so without it you’re really going to have to get creative. I think social media is great for that, obviously, but even that will probably start feeling really unfulfilling, so I think it’s going to create something entirely new.”

Remington: “I think, like Jenna said, something else is going to come along that’s probably going to be more suitable. But you really don’t know how much of an impact a tour like this leaves on society or the music scene until it’s gone. How are you supposed to know something was truly great until it goes away? I think in the next couple of years people will go, ‘Wow! That was a really fucking great tour!’ It put a lot of bands on the map, but I think it did its thing. And it did a great fucking thing.”

Following ETID’s split, Keith Buckley says he’s been working with a new band “since September”, and “the new music has never been heavier”.