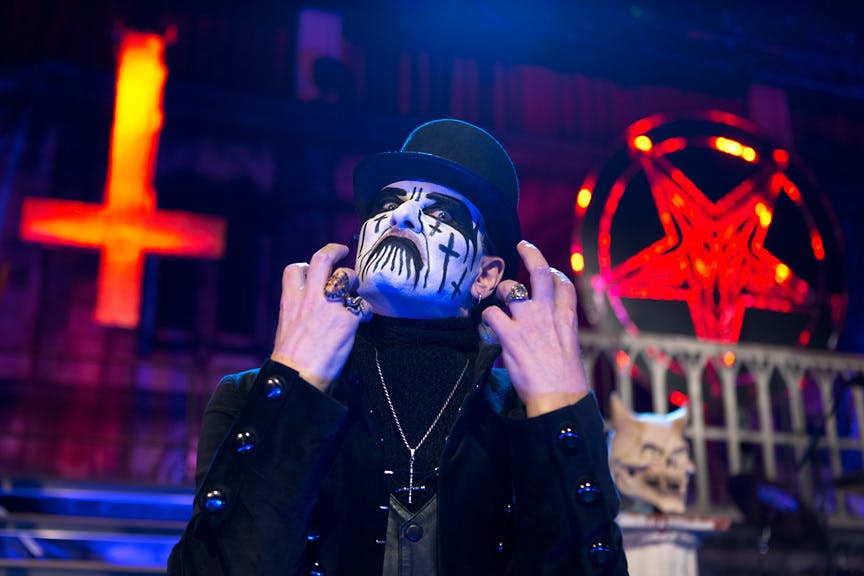 Satanists should stop where they are and get their earphones out: King Diamond debuted a bouncing new song at the Hellfest Open Air in Clisson, France. The track, Masquerade Of Madness, is the King's first since 2007. It's catchy with a heavy bass line, which create's a fun dynamic with his Highness's falsetto vocals.

You can watch the theatrical performance below.

The song is expected to be off of his upcoming album.

In a recent interview with Kerrang, he spoke about the new material, saying, “The next King Diamond album is going to be a two-parter. We’re having our show built for the next round of touring and it’s gonna be nuts. Some of it’s using my personal experiences that we’ve just talked about. The concept is to do with when they first discovered how they could help human beings through prolonging life with operations. Then there’s stuff about the crazy side of that with asylums and how they used to try helping people with difficulties by drilling holes through their heads! It’s going to be a lot of fun, and I can’t wait for people to experience it when it all comes together.”

On the subject of time between albums, he said, “We really should have recorded something way before now, but the whole music industry has been changing and with streaming it’s been a difficult one to figure out for record labels and bands. We put every penny into designing the live shows and making the stage set. It was more logical to go out and play more shows, which is what we did, but I have to make new music. I love to create, and a new King Diamond album is definitely on the horizon.”

You can catch him on the remaining dates of his European tour:

King Diamond: "If there is a hell and I go there who cares? I've already faced it"

"Any fan of the horror genre will enjoy the darkness and creepiness of this project…" teases King Diamond.