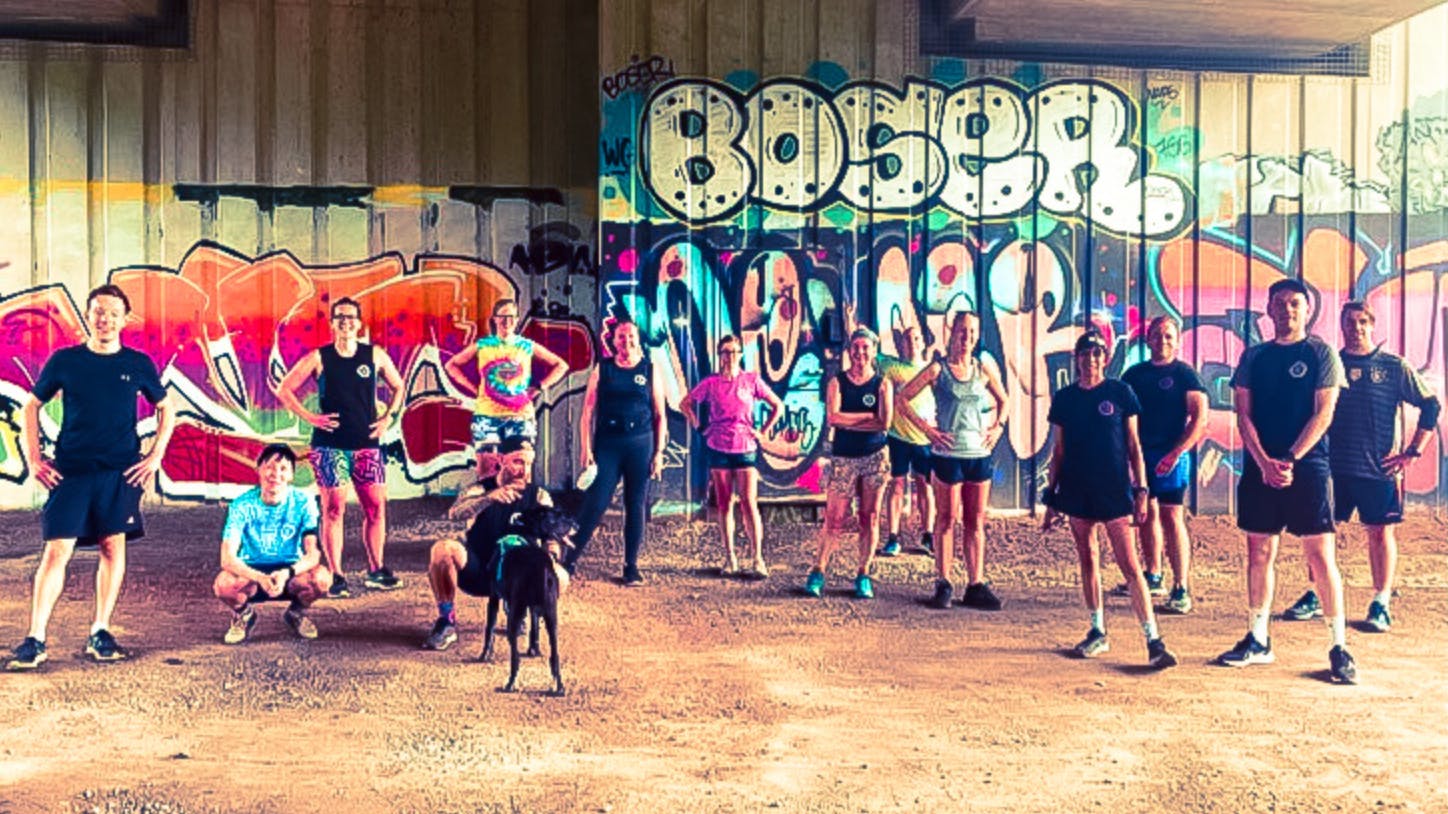 Shortly after Rhodri Morgan first took up running in his early 30s, he tried going to running clubs. The experience almost made him think pounding the pavement wasn’t for him. “I found them very unwelcoming,” he remembers. “The first time I went, I turned up in a Metallica T-shirt, started chatting to people, but they didn’t want to know. For the hour-and-a-half I was there, nobody really spoke to me.” He found the environment too elitist and competitive, with its members less interested in helping beginners than in what sort of trainers could make them run that second faster. After shaking that negative experience off, in the true spirit of punk, Rhodri decided to do running his own way.

One day, he bumped into his old friend Jimmy Watkins, poetically, while both were out running – Rhodri was doing his first ever marathon, while Jimmy was running a half marathon in the other direction. A former professional athlete, Jimmy had recently rediscovered running as a way of disposing of the unhealthy habits that had crept into his life over the course of a decade. Sick of the discipline and regimentation of athleticism, he joined a band instead, only to fall into an unhealthy and repetitive lifestyle where drinking to excess was a common occurrence.

The old friends reconnected online, bonding over both running and the music they loved, and realised there must be more people like them who didn’t fit the image of the traditional runner, or who didn’t quite have the confidence to lace up their shoes and head outside. Hoping to show these people the countless benefits that running could have, the pair started the online community Running Punks.

Everything the Welsh friends do in terms of running comes from a punk mentality – but what’s so punk about exercise?

“I think for both of us, it’s about taking what we’ve learned from music and art and applying it to sport,” begins Jimmy. “We applied the attitude of the people we looked up to running. Those people didn’t give a fuck, and that was kind of the thing about them that we loved. They were confident in themselves and really didn’t care about judgment. For a lot of people, putting shorts and a T-shirt on is as big a gesture as wearing a skirt at Wembley. We want people to be confident in themselves. Just don’t give a fuck, and just do it.”

While empowering the individual runner is important for Running Punks, they also embody punk’s passion for community. They want to show that running can create connection, whether that’s online, with the hashtag #runningpunks, or in real life. “If you’ve run with someone you’ve never met, and you run side-by-side with them on the road, within a mile or so you will be having the most deep and meaningful conversations. It feels safe, like you can say anything to the person running besides you,” Jimmy continues. “Club runners don’t run like that. They run in single file. Even with a little thing like that, they’re cutting themselves off from connecting with other people.”

It’s wonderfully easy for anyone to join the Running Punks community. All it takes is one post on social media with the aforementioned hashtag, with runners usually sharing the route they took, and perhaps most importantly, what they listened to on the way.

“The amount of new music I’ve discovered through the Running Punks community is insane,” remarks Rhodri. “Everyone shares new music and it’s led to people meeting up and going to gigs together.”

Jimmy often posts videos online of him talking about a recent album he loves while he’s out on his daily run. “I never really liked heavy music until I started running again,” he says. “I would have never been a fan of the death metal bands I am into now if I hadn’t started running again. They’re perfect for running to around the quiet countryside.”

Another thing that makes Running Punks better than your average gym membership is that it’s completely free to join (and rejecting capitalism is pretty punk, after all). They’ve had the idea of starting a monthly membership suggested to them, but they swiftly shut it down. “It would feel a bit cheeky, really, charging,” explains Rhodri. “We just encourage people to put one foot in front of the other and keep going.”

The only money they make from Running Punks is through selling merch, but that was never about financial gain. After all, it’s intentionally cheaper than most running kit. Instead, it was to enforce that sense of community they’re so passionate about, and give runners a feeling of identity. “We’ve seen it literally like a merch table at a gig,” says Jimmy. “Even down to the designs, we’ve asked, ‘Would you see this on a merch table?’"

Originally, Rhodri and Jimmy envisioned themselves working more directly with bands, introducing them to running as a means of bettering their mental health and finding a release in a healthier way than through drugs or alcohol. The pandemic prompted it to transform into the initiative is now, but there’s still a few well-known names amongst the Running Punks community: Bob Vylan gave them a shoutout during a gig in Wrexham, IDLES sent Jimmy their latest album early so he could feature it on a Running Review, Funeral For A Friend’s Matt Davies-Kreye has worn their merch onstage… They even inspired Every Time I Die’s Stephen Micciche to give running a go after he saw Jimmy’s Running Review of their last album Radical.

Considering the famous faces who support them, and the passionate tribe of exercise and music fanatics that identify as punk, both men are in disbelief at just how large their initiative has grown.

Get involved with Running Punks now.