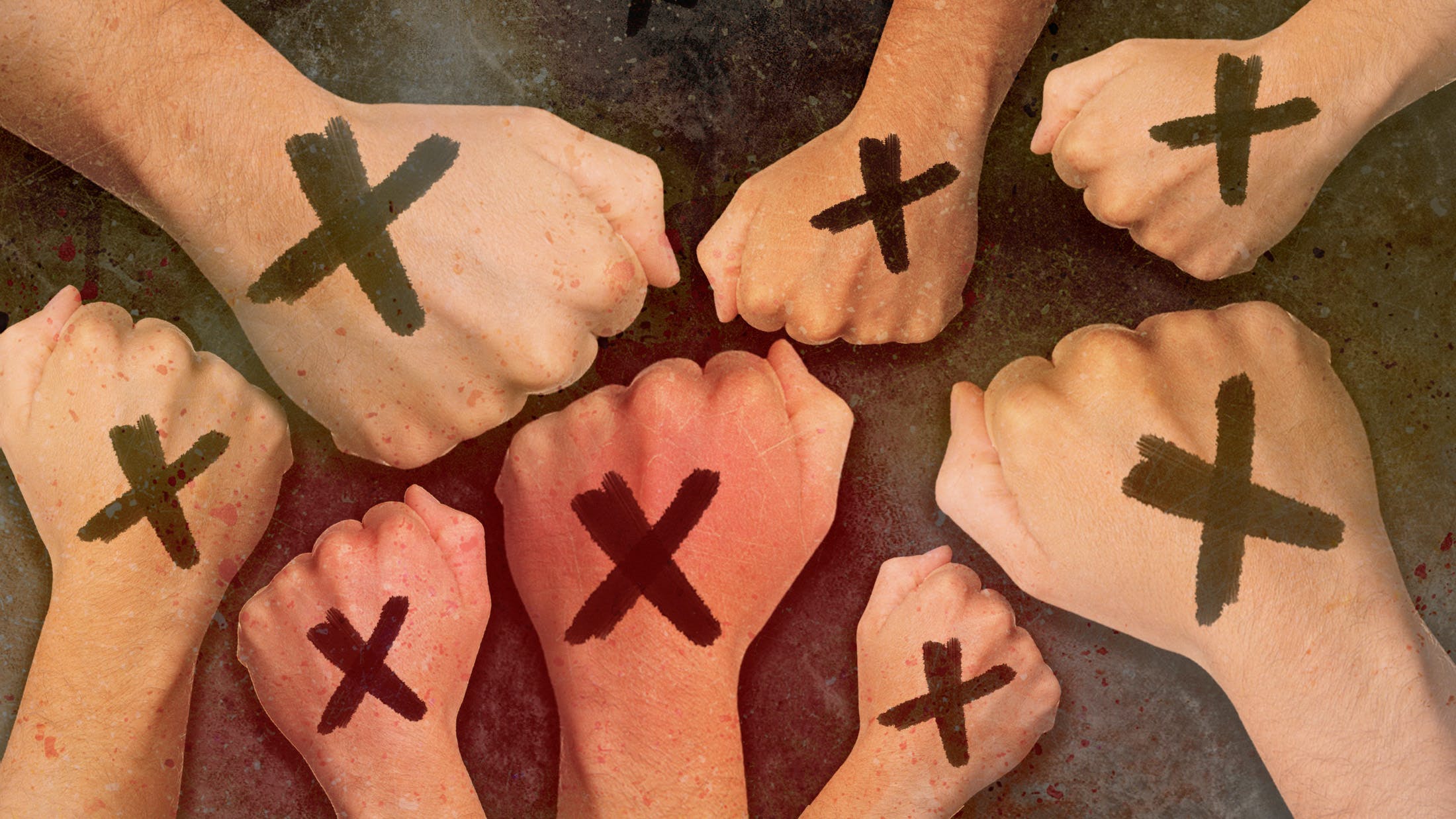 Over 35 years since the straight edge movement gained its name from Minor Threat's 1981 single Straight Edge, the lifestyle still has many adherents who 'claim edge'. As a movement that developed at hardcore shows throughout the '80s and '90s (where people would have black Xs daubed on their hands, as a way of repurposing the black Xs that were put on the hands of minors at shows so they wouldn’t get served), it is no longer an underground movement. And approaches towards what the movement represents, and the militancy that’s associated with it, are different in 2020.

Jeremy Bolm from Touché Amoré became edge at 14 in 1996, after watching an Ozzfest ‘96 VHS tape where an Earth Crisis performance prompted him to buy their Gomorrah’s Season Ends album, the liner notes for which contained information about straight edge. “It wasn’t until I started going to actual hardcore shows that I met anyone else that was straight edge,” says Jeremy, “and that’s when I felt that belonging, for once.”

In 2001, a 17-year-old Trevor Friedrich, who has been the drummer in the straight edge band Eighteen Visions since 2004, decided to become straight edge after drinking and doing drugs as a young teen. “What I was doing was no longer extreme, and I was falling right in line with brainless scum without any of the same values I had,” he says.

“It wasn’t until I went to a hardcore show and first saw Eighteen Visions that I discovered the straight edge community. That’s all it took – I discovered a whole new world, and finally felt not so alone in my way of thinking.”

Nathan Stephens-Griffin from the Durham pop-punk band Martha claimed edge at 18 in 2004. Going to university was a turning point for him, where he decided to stop drinking after hearing about parties during Freshers’ Week, extolling the excesses of it. “Not long after that, I became vegan and I was listening to a lot of vegan, straight edge, hardcore stuff, like Earth Crisis and things like that,” he says. “I was sort of attracted to the politics but not the aesthetic of the music, not the machismo of it.”

All three of the musicians became involved in their local hardcore scenes as teenagers and took pride in identifying as straight edge. For Jeremy, who has seen straight edge’s appeal extend beyond a relatively parochial presence at hardcore shows in the two decades since he claimed edge, its more overt presence in mainstream culture in recent years isn’t what he feels the movement represents.

“That wrestler, CM Punk, whose whole gimmick was being straight edge, I was just like, ‘That’s so fucking corny’,” says Jeremy. “That’s the type of shit that would make me not want to be straight edge anymore. I was like, ‘Okay, this has gone too far’. When I hear straight edge referenced in a TV show or a movie it just kind of gives me idiot shivers, where I’m like, ‘Ugh, don’t do that’. It’s second-hand embarrassment.”

In 2017, Eighteen Vision released their searing single Oath as a means of solidifying their commitment to being edge, while chastising those who had left the movement. Trevor says that the song still resonates today. “The best part is writing a song like that and playing it live in 2018 and 2019, and seeing the positive feedback is still strong as fuck.”

Despite the changing representations of straight edge and its movement into the mainstream, the core values of it – abstaining from drinking, smoking and drugs – remain unchanged from when the movement first gained traction, and for Nathan the longevity of his commitment is clear-cut. “I've been able to do it for so long because it hasn’t been a rod through my back,” he says. “It’s always felt like a choice I've been making every day. It’s not like, ‘Oh God, I have to be straight edge now, because I’ve said I’m straight edge’. It’s a choice that I make.”

Approaching straight edge as a daily decision has worked for Nathan. While there was a time when breaking edge, or not seeing it as a lifelong commitment, could draw derision from other people in the movement, it seems that this has become less of a point of contention in 2020.

“When I was younger, sure, maybe I pretended to care a little bit [when someone broke edge], where I was like, ‘Oh man, that sucks’,” says Jeremy. “But I’m not going to stop being friends with somebody because of it. I would say that one of the downsides of when a friend breaks edge is that you have to now watch them try to play catch up as quick as possible, and that’s always a fucking nightmare.”

“We’re all a lot older now, and I don’t begrudge Daniel or JC for no longer identifying with it because they still agree fundamentally with the politics.”

People who follow straight edge have, in the past, been characterised as being militant in their beliefs, and as having no leeway towards those who don’t follow the lifestyle or who’ve broken edge. Nathan and Jeremy are open to the possibility that they might drink alcohol at some point in their lives, and it seems that those who follow the lifestyle are more accepting nowadays.

“If I’m going to be completely honest, I don’t care about straight edge at 36-years-old. It’s just that thing about it being second-nature,” says Jeremy. “I say this often to friends about it, that I’m only still straight edge because I’m fuckin’ lazy. I don’t have the time or energy to discover something new.

“I’ll probably hit that moment in my life where I can just have a glass of wine with dinner and just be very calm about it, but the thing is, I haven’t had the urge to do it. It’s gotten me this far, and I don’t really care, it just doesn’t affect me.”

Nathan has a similar approach to being straight edge in 2020, where he feels that there may a point where he will drink again, but he primarily sees his decision to be edge as being a political statement. “I’ve always had an attitude of, well, maybe I will start drinking,” he says, “but that won’t change what’s fundamentally a political perspective on binge drinking, and the damage that drinking culture does, and how it connects with all these other social problems. It’s very much connected to my politics, so when I claim it, it’s a political statement rather than being a purity statement.”

He adds, “I don’t mind that (Youth Of Today vocalist) Ray Cappo has a glass of wine with his Italian meal, it doesn’t let me down. Maybe one day I will [have a glass of wine], but it hasn’t happened yet. I keep waiting for it to happen, but it doesn’t.”

For others, being straight edge is a still a definitive and unwavering lifelong commitment. Trevor feels strongly about people who break edge, and his commitment to the movement is as fiercely held now as it was when he was a teenager. “So many have fallen, and it becomes more apparent that it was just a trend for so many people to follow,” he says.

“It really sucks when I find out that some of my straight edge heroes growing up are just actual fucking losers. But that type of thing only makes me hate that world even more, and I become even more proud that I’m stronger than ever in the choices I make. I love being extreme in living life against the grain, and I feel that I always will have that mentality. I know for a fact that I will live the straight edge lifestyle until the day I die.”