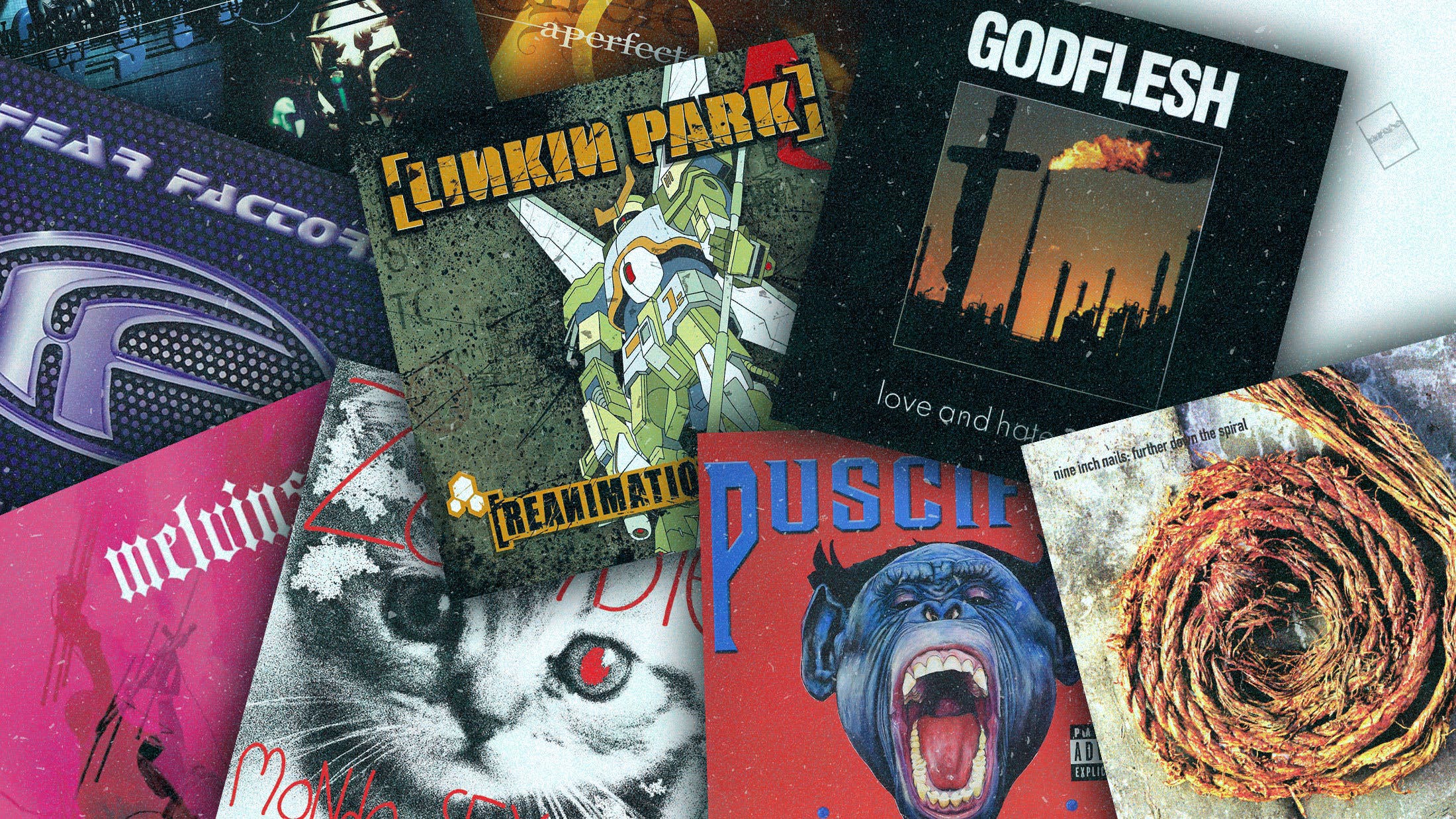 The art of the remix is more commonly applied in hip-hop and dance music than the rock and metal world, but there are still some fine examples of mixing and mangling that have emerged from the noisier side of the studio – often involving bands with a more experimental streak, or who already make extensive use of electronic elements.

Sometimes these remixes can be self-indulgent and baffling, but others can breathe entirely new life to a track. As Deftones release their sensational reinvention of White Pony in the form of Black Stallion, featuring remixes by the likes of Linkin Park’s Mike Shinoda, DJ Shadow and The Cure’s Robert Smith, we take a look at 10 more remix albums that are definitely worth a visit.

Mike Shinoda’s take on Deftones’ Passenger is one of Black Stallion’s standout moments, which is apt as Linkin Park were no strangers to the art of the remix. From the moment they emerged, they had a more open-musical mindset than the bulk of their nu-metal peers. A remix collection of songs from their smash debut Hybrid Theory made perfect sense, as did the decision to work with largely underground hip-hop artists. Closing the circle, Stef Carpenter of the Deftones also made an appearance, along with the likes of Jonathan Davis and Staind’s Aaron Lewis. To date it is by far the best-selling rock or metal-based remix album of all time and the fourth biggest of any kind – behind only Michael Jackson, Madonna and The Beatles.

Trent Reznor had already deconstructed Nine Inch Nails’ breakthrough EP Broken with the appropriately titled Fixed, which focused more on the industrial and less on the metal as it replaced the riffs with pummelling beats and jarring aural manipulations. He went the whole remix hog on Further Down The Spiral though, with collaborators including Rick Rubin and Aphex Twin given full rein to do what they liked with the material. Trent and his NIN bandmates of the time also joined in the fun, resulting in a truly diverse and experimental reimagining of the original.

As one of the original industrial pioneers, Canada’s Skinny Puppy were a huge influence on a long line of electronic and hybrid noise terrorists. As such, it was befitting that the then-defunct band had their early compositions disinterred and reworked by a crop of devotees. Among members of industrial and EBM types like Gunter Schulz of KMFDM and Rhys Fulber of Frontline Assembly, another familiar name sticks out – with Deftones once more making this list. Their aggressive take on Spasmolytic also made the Saw IV soundtrack.

Much like Nine Inch Nails, Fear Factory experimented with an EP (1993’s Fear Is The Mindkiller, featuring five remixes by Rhys Fulber and Bill Leeb of Front Line Assembly) before taking the remix plunge. Remanufacture was a complete rebuild of their classic sci-fi concept album Demanufacture. Fulber again figured prominently (he also served as a touring member in FF for a while), with Junkie XL and a number of other guests contributing to a more diverse and textured – if less direct and brutal – companion-piece.

White Zombie’s final release was a reasonably awful remix album called Supersexy Swingin’ Sounds. “Super Sexy Swinging Bullshit! I had nothing to do with that,” said bassist Sean Yseult some time afterwards, but that didn’t stop frontman Rob Zombie from having another go under his own solo banner. First there was American Made Music To Strip By, which focused on the Hellbilly Deluxe album, but Mondo Sex Head took a dip into his entire career, including White Zombie, and veers wildly in style and quality – much like his original material. Korn’s Jonathan Davis makes an appearance in his EDM guise J-Devil while there’s yet another Deftones connection as Chino Moreno’s ††† (Crosses) tackled Zombie’s biggest hit Dragula.

Most of these entries predominantly feature outside remixers, but industrial godheads Godflesh decided to tackle their own classic Songs Of Love And Hate themselves. “I love remix culture anyway, but there's a lot of tokenism with dance remixes that's quite horrible,” said frontman Justin Broadrick. “That's why we do it ourselves because we have a vision of what we want to achieve, instead of having to draft in other people to give us a vision.” That vision was an album that took out a lot of the metallic spite in favour of more ambient, dub and drum'n'bass elements. It’s not to everyone’s taste but that entirely new flavour is pretty much the point.

By contrast, ISIS frontman Aaron Turner told Self-Titled that, while the band were keen to explore their more ambient, electronic and abstract side, they felt it best to put it in the “more capable hands” of musicians outside the band whose work they admired. Mike Patton and Justin Broadrick are the most immediately recognisable names involved, but other underground luminaries included breakcore pioneer Venetian Snares and Ted Parsons, an alumnus of Swans, Prong, Godflesh, Killing Joke and Jesu. The results veer from pure ambient atmosphere to tracks that retain but alter the heaviness of the original.

aMOTION was released as a sort of companion-piece to the somewhat patchy cover album eMOTIVe, and was a treasure trove for APC fans. As well as a complete DVD videography, the collection included a set of remixes from their previous studio albums Mer de Nomes and Thirteenth Step. Massive Attack, James Iha of Smashing Pumpkins and even Limp Bizkit guitarist Wes Borland all lent their talents to an album that tended to explore and enhance the originals rather than radically rework them.

We’ll stick with Maynard James Keenan and his other side-project Puscifer. The Tool (and A Perfect Circle) frontman has described Puscifer as a “catch-all, stream of consciousness, anything goes" project, which would seem to make it primed for the remix treatment. Star turns include ex-Slipknot drummer Joey Jordison and Ministry’s Paul Barker, and while it doesn’t all hit the mark, there’s plenty here that’s worth investigating.