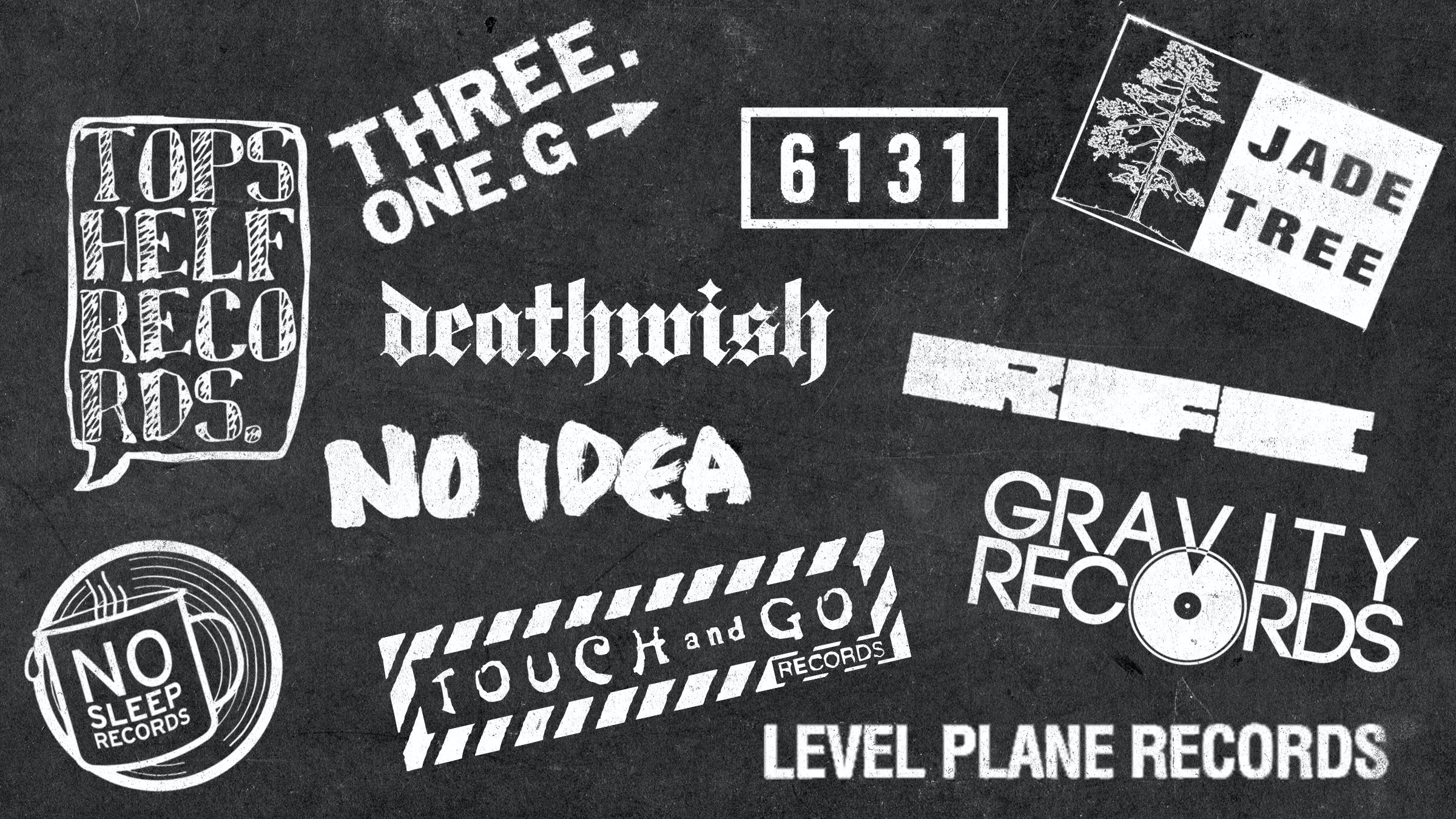 For better or worse, 2018 is a post-truth, postmodern, Post Malone kind of world. The plus side of that, however, is that the world of post-hardcore is positively thriving, and the likes of Touché Amoré and La Dispute have become some of the biggest names in the scene. Both are now signed to Epitaph Records, but those bands’ foundations – as well as those of their contemporaries and forefathers – were laid by a whole bunch of smaller labels who really helped develop and nurture the scene.

As with every genre – especially every genre with a ‘post-‘ at the front of it – there exist some loose parameters when it comes to defining exactly what post-hardcore is. More melodic and emotional than straight-up hardcore, it contains aspects of screamo and even noisecore. That said, just like that nebulous term 'emo,' the designation ‘post-hardcore’ allows for plenty of stylistic variation.

It makes sense, then, that many of the labels that helped propel post-hardcore into the wider world have diverse musical rosters – some much more so than others. But what all the labels featured here have in common is the massive impact they’ve had on the post-hardcore scene. (And yes, many of you will notice that both SST and Dischord are absent from the list below, but that’s because they’re more associated with hardcore, so we included them on this here list the last time around).

While this LA-based label has always had a roster that expands beyond post-hardcore, the fact alone that they released Touché Amoré’s 2009 debut, To The Beat Of A Dead Horse – an album that helped redefine the contemporary post-hardcore scene – warrants their inclusion here. They also released Culture Abuse’s first album, Peach, and reissued the self-titled debut by post-hardcore legends Handsome on vinyl. Then in a complete left turn, they were so taken by the fragility of Julien Baker’s heartbreaking songs that they released her debut album, Sprained Ankle. Which probably makes 6131 the world’s first post-post-hardcore label, if you want to be difficult about it (and who doesn’t?).

Given that they released the first two La Dispute full-lengths -- 2008’s highly influential Somewhere At The Bottom Of The River Between Vega And Altair and 2011’s acclaimed follow-up, Wildlife -- as well as Touché Amoré’s 2008 demo, it could be argued that no label helped shape the contemporary post-hardcore landscape more than No Sleep. Again, they’re not exclusively a post-hardcore label, and their biggest success is probably shapeshifting (anti-)pop-punks The Wonder Years. But add Xerxes (one of the most underrated bands around), Actor/Observer, and a split between Boysetsfire and UK post-hardcore heroes Funeral For A Friend into the mix, and it’s clear that No Sleep is an indispensable part of the post-hardcore world.

Run For Cover’s roster is as diverse as post-hardcore itself, boasting a client list including Self Defense Family, Citizen and mewithoutYou – all very different bands, but all of whom are a fundamental and important part of the scene. Demonstrating just how close-knit that scene actually is, Run For Cover’s first release was 2005’s Meridian by Seattle post-hardcore-ish crew Sinking Ships – and 6131’s first release was a reissue of the very same record. In 2016, the label also reissued the debut (and as yet only) solo record by Walter Schreifels, the man behind legendary post-hardcore outfits Rival Schools and Quicksand, among others.

One of the most intense post-hardcore acts to ever grace this planet is A Wilhelm Scream. And we can argue until the cows come home about whether the Boston band are actually a post-hardcore band, but given that the term is pretty nebulous, we’re calling it. And given the fact No Idea put out the band’s phenomenal 2013 LP, Partycrasher, the Gainesville label deserves a spot here for that reason alone. Meanwhile, No Idea has also issued records by The Bomb, the band formed by Jeff Pezzati after influential post-hardcore icons Naked Raygun called it a day; and put out the seminal first records by Planes Mistaken For Stars.

Set up by The Locust’s Justin Pearson in 1994, Three One G can lay claim to one of the most diverse and idiosyncratic rosters on this list, whether that’s Justin’s own band’s and their patented form of brutal, frenetic so-called “freak-punk”; the poetic “talking songs” of Adam Gnade; the deathgrind of vegan heroes Cattle Decapitation; or the oddball, saxophone-wielding, post-hardcore of Californians The Plot To Blow Up The Eiffel Tower. The label’s crowning post-hardcore jewel, though, is March On Electric Children, the second record by Washington state stalwarts The Blood Brothers, which remains an essential part of any aficionado’s collection more than 16 years after its release and secured Three One G’s place in post-hardcore history.

Co-founded in 2000 by Jacob Bannon – of the influentially brutal Converge – Deathwish’s roots might be in pure hardcore, but it has plenty of post-hardcore notches on their metaphorical bedpost. Most important among these are Touché Amoré’s second and third records, 2011’s Parting The Sea Between Brightness And Me and 2013’s Is Survived By, as well as bunch of splits and a forthcoming live album by the band. But it’s not just Touché that gives Deathwish its post-hardcore cred – the label also put out Planes Mistaken For Stars’ phenomenal 2016 album, Prey; have issued records by Self Defense Family, Birds In Row and Frameworks; and are about to release the new album by Gouge Away.

If you thought all this post-hardcore label crossover was a bit incestuous, here’s something completely different. Greg Drudy, who founded Level Plane in 1997, was the original drummer for gloomy New York indie types Interpol. But he also hit the sticks for screamo legends/Level Plane band Saetia, who definitely crossed over into post-hardcore territory at times. Similarly, scene stalwarts pg. 99 and Jeromes Dream, both of whom released records on the label, have a foot in both genres. Level Plane also put out A Dead Sinking Story by influential Japanese post-hardcore outfit Envy, as well as the debut album by sort of post-hardcore supergroup Hot Cross, which also featured Greg Drudy behind the drum kit. Sadly, the label closed in 2009.

Another sadly defunct (well, kind of) label, Jade Tree’s entire catalog was actually purchased by punk behemoths Epitaph in 2017. As already mentioned, the label now boasts Touché Amoré and La Dispute among its ranks, and the acquisition of the Jade Tree catalog adds a whole ton of history to equation. That’s because, in addition to legendary gloomcore (we just made that up), albums by the likes of Pedro The Lion and Jets To Brazil and a stunning split between Alkaline Trio and Hot Water Music, Jade Tree’s arsenal includes Analphabetapolothology – the collected recordings of emo-cum-post-hardcore legends Cap’n Jazz – and, more to the point, the first two albums by These Arms Are Snakes, two vital and thrilling records that any fan of the genre has to have.

Founded by Matt Anderson, the singer of pioneering screamo/post-hardcore outfit Heroin, Gravity Records was not only home to that band’s releases, but also to records by the hard-to-pronounce Antioch Arrow and the even-harder-to-pronounce Clikatat Ikatowi. That triumvirate of bands came to define what’s known as the “San Diego sound” – a slightly sloppier, looser, rawer, more lo-fi and chaotic incarnation of post-hardcore, all clattering drums, spasmodic guitars and tremulous vocals. Mohinder, who put out all of one 7” on Gravity, and Angel Hair, whose discography was released by Gravity, were also part of that sub-genre, making the label a fundamental part of its history and guaranteeing it a place in post-hardcore folklore.

With post-hardcore heavyweights like Big Black, The Jesus Lizard, Killdozer, Tar, Slint, Shellac and Girls Against Boys on its roster, Touch And Go are a necessary inclusion to any list of post-hardcore labels. It was initially set up in 1979 as a fanzine by punk rocker Tesco Vee (of Tesco Vee’s Hate Police and The Blight ‘fame’), and started putting out records a couple years later. Almost four decades on, it’s still going strong. They’ve diversified a bit and released albums by Tex-Mex indie rockers Calexico, but they also recently re-issued a whole bunch of Naked Raygun records, so they’re keeping it real, too.

While Topshelf Records definitely sit more on the indie side of things, they’ve put out records by two of the most acclaimed and inventive post-hardcore bands currently around right now – Defeater, whose albums are all set in post-World War II era America, and The Saddest Landscape, who make quite possibly the most emotional screamo/post-hardcore racket ever. Not only that, but the label also counts Octaves, Pianos Become The Teeth, We Were Skeletons and My Fictions as alumni, so even if post-hardcore bands only make up a minority of their roster, they’re far from imposters.