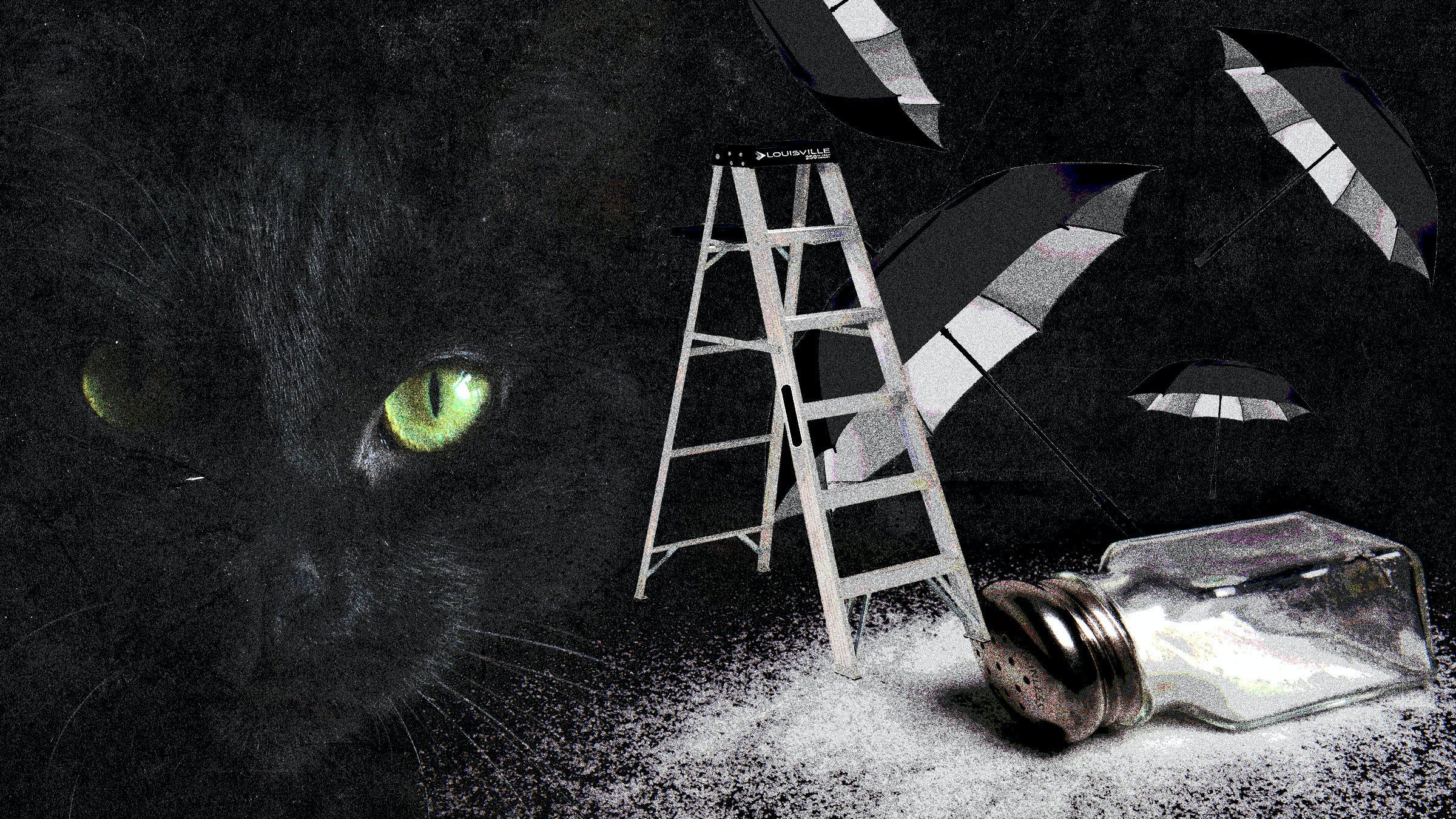 If you have nothing better to do, you can waste several hours poking about on the Internet to find out why Friday the 13th is considered unlucky. According to biblical tradition, there were 13 guests at the Last Supper, which makes 13 an unlucky number, and Jesus got nailed to a tree for being a hippy on a Friday, which wasn't exactly fortunate, thus bringing Fridays into the equation. Not that he wasn't a hippy every day, of course, it's just that Fridays are when crucifixions took place.

However, according to Donald Dossey, the founder of the Stress Management Center and Phobia Institute in Asheville, North Carolina, it can be traced back to a Norse myth about 12 gods who were having a party in Valhalla that was crashed by Loki, the uninvited 13th guest, who then tricked Höðr into shooting his brother Baldr, rather ruining the party.

Whatever the case, this mumbo-jumbo persists to the point where you'll find hotels with no 13th floor, airports with no 13th gate, and a whole string of horror movies about a nutter in a hockey mask that are only too happy to cash-in on your baseless beliefs (this coming from a writer who won't listen to a band on the day they're playing, because of some stupid superstition). Yeah, we all have them, so knock on wood, cross your fingers, and enjoy our list of 13 songs about bad luck.

'Bad luck wind been blowin' on my back. I was born to bring trouble wherever I'm at,' croons the evil Elvis on this, the closing track of his sixth studio album, 6:66 Satan's Child. Danzig originally wrote this dark and brooding song for Johnny Cash, an acoustic version appearing on the country star's posthumous Unearthed boxset of 2003. It also features, rather aptly, as the opening track in the film The Hangover. According to Danzig, it took just 20 minutes to write the tune, which would have made a far better story if he'd been seven minutes faster.

Released on Friday 13th of November, 1981, on The Damned's aptly-named Friday 13th EP, this track concerns an unfortunate chap whose moniker suggests that he's best avoided. Mostly because all he ever does is make mistakes. 'What does the future hold in store? More bad luck at your front door,' intones frontman Dave Vanian, who knows a thing or two about these things. In the brilliant 2015 documentary about the band, Don't You Wish That We Were Dead, there are numerous references to The Curse Of The Damned, and director Wes Orshoski told the Irish News, “Trust me, The Curse Of The Damned is alive and well. I still live in fear of it. I suffered from it often, probably no more so than when I ended up in a Croydon hospital after being mugged while shooting with [guitarist] Captain Sensible.”

From Billy Bad Breaks we move to Billy No-Mates, a complete pain in the arse who – not unlike Loki – tags along uninvited only for the whole night to go tits-up because of his unwelcome presence. He joins Brighton punks Peter & The Test Tube Babies at a local pub before they head to a nightclub that they're not allowed entry to. And thus, stranded miles from home, the last bus fails to stop. By all accounts, 'It's quite clear: this wouldn't happen if he weren't here.' Oh, and if you take him to any kind of sporting event, your team will lose.

Another bloke who seems to jinx everything is a fella named Mr. Bad Luck who features on the Jimi Hendrix album Valleys Of Neptune, released in the U.S. in March 2010. The more observant rock fan may be aware that Hendrix died in September 1970, after unluckily choking on his own vomit while intoxicated, so obviously this compilation was released posthumously, much of it having been recorded in ’69. Alas, history does not seem to record who the song was about, if anyone in particular, but he was obviously a complete downer. 'Look over yonder, he's comin' my way,' sang Jimi. 'When he's around, I never have a happy day.'

In which Mr. Fafara and crew explore all manner of superstitions, including, but not limited to, walking under ladders, breaking mirrors, knocking on wood, and throwing salt over one's shoulder. The first of these is common sense, since someone might be up there with a bucket of paint or a hammer, but the last-mentioned seems like a waste of salt, frankly. Interestingly, Dez is a member of the Freemasons, whose website tells us that it 'requires of its members a belief in God as part of the obligation of every responsible adult, but advocates no sectarian faith or practice,' but mentions nothing about black cats nor holding one's breath in cemeteries.

Johnny Thunders and The Heartbreaks – Born To Lose (1977)

Even if the title wasn't repeated over 30 times, it wouldn't take a genius to figure out that New York punk band Johnny Thunders And The Heartbreakers were not exactly blessed with best of luck. Although, to be fair, much of their misfortune came from being a bunch of junkies. Constant fall-outs in the band caused numerous line-up changes, and they are largely blamed for introducing heroin (and Nancy Spungen) to the UK punk scene. Not surprisingly, frontman Johnny Thunders was found dead from a suspected overdose in a New Orleans hotel room in 1991, while drummer Jerry Nolan died a few months later after suffering a stroke. Strangely, guitarist Walter Lure now works as a Wall Street stockbroker, perhaps one of the few Heartbreakers who wasn't born to lose.

It takes a lot more than a number and a bunch of old wives' tales to scare the inventors of black metal. Here on the 13th track – of course – from their Resurrection album of 2000, we find Cronos and crew deriding such nonsense in their usual brutal fashion, stating, 'Cross your heart and hope to die / You superstitious fool,' before adding that you fears are 'totally irrational'. Cronos, it should be noted, has 13 blacks cats, opens umbrellas indoors, and always puts his new shoes on the table. Probably.

Also covered by Jimi Hendrix, Black Stone Cherry, and many more, this version of Albert King's 1967 blues classic Born Under A Bad Sign was released in 1968 on Cream's Wheels Of Fire record, which became the world's first platinum-selling double-album. So much for, 'If it wasn't for bad luck, I wouldn't have no luck at all.' Indeed, the band, featuring Ginger Baker, Jack Bruce, and Eric Clapton, are considered to be the first-ever supergroup, and have sold a staggering 15 million records, which isn't bad considering that they were only in existence for two years. Granted, they couldn't stand each other, but that seems to be more about bad tempers than bad luck.

“I’ve been through enough bad times in my life to where I know that when you’re going through a hard time, you’re just paying for a good time to come,” Social Distortion frontman Mike Ness told Guitar.com in 2015. That said, this catalogue of calamity, from 1992's Somewhere Between Heaven And Hell album, appears to have been written about someone else, saying, 'Some people like to gamble, but you, you always lose / Some people like to rock’n’roll, you're always singin' the blues.' Lucky for Social D, the song was their highest-charting single to date and the album certified gold.

God knows how it's pronounced, but apparently paraskavedekatriaphobia derives from something Greek and is the irrational fear of Friday the 13th. Though an inadvisable name for a song – try requesting that one after a few drinks – it features on Fozzy's 2010 album, Chasing The Grail… which was released on a Tuesday. Not that we have any intention of taking this piss, since frontman Chris Jericho is built like a truck and has won numerous professional wresting championships. Like Devildriver's Unlucky 13, the song explores various superstitions, further suggesting that Thursday the 12th might be bad for one's health. Best to stay in bed all week, just to be on the safe side.

Given that most of the original band died in a terrible plane crash in 1977, this tale of woe from Skynyrd's 1994 album Endangered Species is rather close to the mark. 'Good luck, I'm the last to get it; bad luck, I'm the first,' declares frontman Johnny Roy Van Zant, brother of original singer Ronald Wayne Van Zant, who was among those killed in the crash. In a spooky turn of events, the album Street Survivors was released just three days before the accident, and the first single, What's Your Name, reached Number 13 in the charts. The original album cover featured a picture of the band surrounded by fire, but was changed as a mark of respect to the dead.

Taken from the album of the same name, 7 Years Bad Luck seems a tad optimistic, if anything, since Miami based pop-punk/emo outfit Glasseater only lasted for five years. 'Everything I touch falls apart,' they relate all-too-happily, before unwisely stepping on cracks in the pavement. Drummer Nate Van Dame later joined Ohio pop-punk five-piece Hit The Lights, and had, it seems, considerably more luck, since that band have sold over 120,000 records in North America alone. Eating glass, incidentally, is extremely inadvisable, and will definitely bring you bad luck.

Thirteen songs on their 13th album… maybe, just maybe, there's some sort of theme here. And funnily enough, the album is featured in the 2008 rockumentary Anvil! The Story Of Anvil, in which the band are trying to raise $13,000 to finance the recording. Given that the movie – a real-life Spinal Tap – documents one disaster after another, including playing to 174 people in a 10,000-seat arena, tempting fate may not have been such a great idea. Then again, Anvil have seen an upturn in their popularity since the movie, headlining the Tuborg stage at Download in 2009 and gaining support slots with AC/DC and Saxon, thus proving that, even for the worst afflicted, bad luck doesn't last forever.

"His impact is beyond solar systems": Remembering Jimi Hendrix, the greatest guitarist who ever lived

AC/DC's Angus Young On The Impact Of Jimi Hendrix's Purple Haze: "Boy, That Was It. I Was So Excited…"

AC/DC legend Angus Young reflects on the first time he heard and saw Jimi Hendrix, and how he wanted to "look that cool".