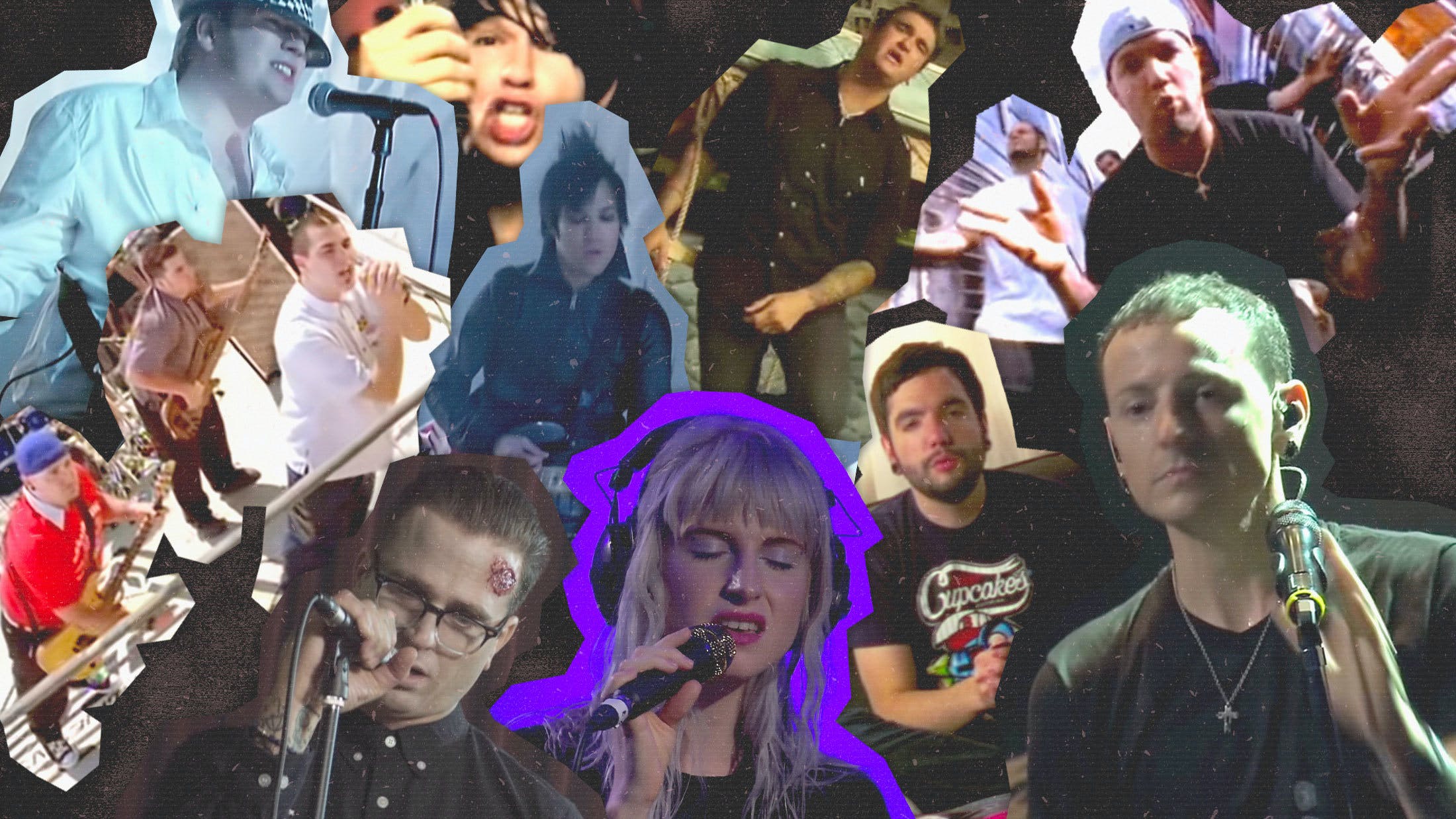 Even if the worlds of rock, metal and hardcore rarely intersect with the pop ecosystem, we owe Top 40 hits quite a lot when you stop to think about it. Who else could we rage against on the charts if it weren't for pop artists? And where else would we draw saccharine pop songs from to reinterpret in our own special, screamy ways?

Check out the below for a myriad of covers, ranging from the reimagined to the completely reconstructed. And don’t forget to sing along…

Released along with their live album/DVD **** Live In Phoenix, Fall Out Boy added their punk flair to one of MJ’s biggest hits. The video features some interesting cameos, plus plenty of wind machines. And no, we can’t explain why John Mayer is there.

A Day To Remember - Since U Been Gone (Kelly Clarkson)

This music video should be shown in alt.rock history lessons. From the haircuts to the T-shirts, it’s the perfect time capsule and a masterclass in How To Do It. A Day To Remember’s take on the pop hit completely redoes Ms. Clarkson’s original, adding plenty of screaming and breakdowns to what was already an angsty anthem.

While I Prevail have gone on to take much bigger steps in their career, it all started with this cover by the pop princess herself. Now sitting at almost 60 million views on YouTube, this was originally launched as part of Punk Goes Pop Vol. 6, but has managed to grow into wider scene consciousness since. Early proof that I Prevail had the pedigree to make it big.

New Found Glory - Kiss Me (Sixpence None The Richer)

There’s covering a song really well... and then there’s covering a song so well that people mistake it for an original. Pop-punk maestros New Found Glory have been putting their own spin on songs from movies for decades (From The Screen To Your Stereo, volumes 1 through 3), yet this track from She’s All That has turned into not only their biggest cover, but one of their biggest songs.

Limp Bizkit have always been known for their lewd, outrageous and tongue-in-cheek behaviour. Here, they show all of that off on this cover of the late-Wham! star’s classic. Plus, the video features LB and all their tour antics captured perfectly in their ‘90s heyday.

From the first chord, you know that this version of Pony is not at all like the smooth R&B original, but it retains all the sex appeal and then some. Full of synths and ironic use of auto-tune, Far took Ginuwine’s original tune about a wild night and added just the right amount of rock groove. However, their body roll skills have yet to be proven.

Not sure if you've noticed, but Adele is quite a big deal around the world. Thus, it makes sense that the band to cover her breakout hit would be iconic themselves. Linkin Park stay true to the original in a stunning way, with Chester Bennington’s soaring vocals perfectly matching the simple keyboard accompaniment.

Combine the nu-metal nous of Korn and the ‘80s soul-funk of Cameo and you've got a alt.cover classic. It sticks surprisingly close to the framework of the original, with a few more thrashing guitars and more modern production. We’re still holding out hope that Korn will one day re-create Cameo's killer dance moves.

Right from the start, Alien Ant Farmhave never been a band to do things the conventional way. Their debut album was called Greatest Hits, after all. Check out the music video for this one, for some early noughties hilarity, including a very talented nine-year-old, a well-behaved chimp and a car explosion. It's not clear why exactly.

We may have bid farewell to Lower Than Atlantis last year, but we’ll always have this awesome take on Vanessa Carlton’s piano-led ballad. LTA give it their full rock spin, complete with Mike Duce’s vocals and chugging guitars. They didn't dare mess with that instantly recognisable piano line, though.

Kellin Quinn has long been a fan of the Goo Goo Dolls, so it's no surprise that their biggest hit would find its way into Sleeping With Sirens' live set eventually. Its stripped-back piano and acoustic guitar approach lets his vocals shine and makes for a regular highlight at the band's shows.

It wasn’t easy to go viral 11 years ago. But, Framing Hanley managed it and with a video featuring a two-minute introduction, no less! Among the sultry strip poker games and video-arcing pool scene, this is a seriously great take on Lil Wayne’s original.

We have Radio 1’s Live Lounge to thank for many reasons. This time, it was the chance to hear power-pop heavyweights Paramore trying their hand at this hit from Drake. Hayley Williams’ performance shines throughout, bringing her own inimitable sense of magic to the Beeb studios.

It’s only fitting that a band who pride themselves on specialising in covers make this particular list. Our Last Night have been reinventing pop classics for years now, and this heavy adaptation of Katy Perry’s Dark Horse is one of their very best.

The Amity Affliction - Can't Feel My Face (The Weeknd)

You didn’t know you needed to hear screaming on a dance track until you heard this. Featured on Punk Goes Pop Vol. 7, The Amity Affliction put their post-hardcore spin on The Weeknd’s 2015 mega-hit, later making a video that featured a zombie love story in the midst of an apocalypse. Hey, why not?

We Came As Romans - Glad You Came (The Wanted)

We Came As Romans' spin on this sickly sweet The Wanted song embraces the original's electro-beats, adds thrashing guitars and backing screams for good measure. Big? Clever? Possibly not, but a surefire winner this most definitely is.