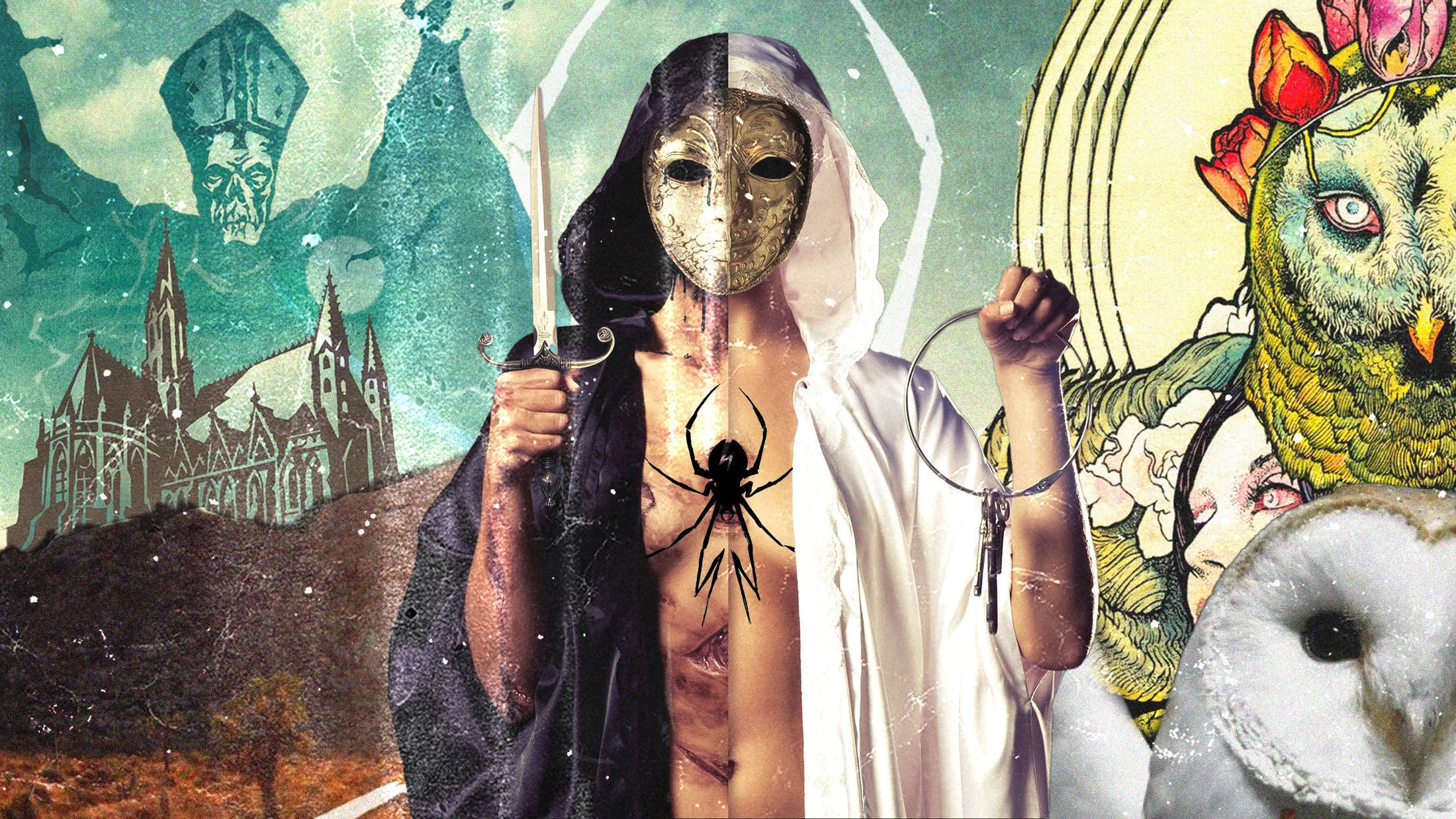 It feels like 2010 was just a few weeks ago. Let’s refresh our memories of what happened during that 12-month stretch in a series of short and largely depressing sentences.

The UK was in the grip of a brutally cold winter in January and December, making it exceptionally tricky for guitarists to practice their scales in chilly rehearsal rooms.

Ash from the eruption of the Icelandic volcano Eyjafjallajöekull – which is pronounced AY-uh-fyat-luh-YOE-kuutl, according to the BBC – caused chaos as flights across Europe were suspended.

In General Election news, the UK woke up to news of a Conservative-led coalition government with the Liberal Democrats. It marked the start of a decade of uninterrupted success for rich, self-serving Tories everywhere.

In Haiti, over 230,000 people lost their lives in a devastating earthquake, which left a further million people homeless.

There was some good news, though, as 33 Chilean miners were saved after spending two months trapped underground.

In the most confusing moment of the year, Paul Gascoigne was turned away during a stand-off between police and gunman Raoul Moat in Rothbury. The former England ace approached the scene in his dressing gown, carrying a fishing rod and cooked chicken for the murderer, in the belief that he was his brother.

A strange time, all told.

Let’s take a look at 20 releases which celebrate their 10th birthday this year.

Recorded in Gothenburg and Los Angeles over a four month period, the Sheffield quintet’s third album saw a seismic shift in their songwriting style, offering a broader bed for frontman Oli Sykes’ anguished howl. Featuring guest appearances from You Me At Six’s Josh Franceschi on Fuck, Lights on Don’t Go, and ‘68 frontman Josh Scogin on The Fox And The Wolf, the album was awarded a full 5K review, stating: "While bleakness is certainly prominent throughout, this album has many different shades and it is these contrasts that make it so vital. It's an album that bursts with ambition, and that Bring Me The Horizon pull it off so powerfully further confirms their greatness.”

In late 2008, Deftones were working on their studio album Eros when bassist Chi Cheng was involved in a car accident that left him in a coma and eventually claimed his life. The following year, the band decided to shelve the recordings indefinitely and worked on new material with Quicksand bassist Sergio Vega, who’d previously filled in for Cheng following a foot operation. The 11-track album, featuring the fantastic Rocket Skates, sees the band positively channel their heartache into a solid body of work. There’s been talk of releasing Eros, but no recordings from those sessions have yet to emerge.

Everything about this Norwegian band’s self-titled debut was perfect. Recorded by Converge’s Kurt Ballou at his God City Studios in Massachusetts, Kvelertak unleashed a potent, uncompromising blend of blackened rock'n’roll, sung – well, growled – in then-frontman Erlend Hjelvik’s native tongue. To top things off, this glorious 49-minute offering was presented in a beautiful owl-themed cover by Baroness’ John Baizley. Perfekt, as they say in Stavanger.

In March 2010, Tobias Forge posted three songs on Myspace: Prime Mover, Death Knell and Ritual. Within seven months, Ghost released their debut album through Lee Dorian’s label Rise Above. Their flawless full-length – a heady mix of Blue Öyster Cult, Sabbath-esque doom and bona fide hooks – was self-produced in Forge’s hometown of Linköping and attracted a swathe of celebrity fans, including James Hetfield and Dave Grohl. Kerrang! later described Ritual as one of the "most evil songs ever".

This Los Angeles quintet released their debut album, Speak Like You Talk, in 2005. Five years later, Fake History – an agitated mix of soul and post-hardcore – drew comparisons to genre forebears At The Drive-In and Refused, while the riotous video for The Sick, Sick, 6.8 Billion garnered attention like moshing moths to a flame. Though the band went on hiatus in 2017, frontman Jason Aalon Butler continues his compelling campaign for societal change in FEVER 333.

After fulfilling their contract with Relapse, genre-defining New Jersey five-piece The Dillinger Escape Plan released their fourth studio album under their own Party Smasher Inc. imprint through Season Of Mist. Where their previous album, 2007’s Ire Works’ offers some of their more accessible moments (Black Bubblegum and Milk Lizard), Option Paralysis serves up another slice of surgically-precise chaos and an aural battering for dessert.

The Gaslight Anthem’s irresistible The ’59 Sound has cast something of a shadow over their back catalogue. But with its follow-up, American Slang, they managed to leave some of their blue collar nostalgia in the rearview and found a new highway to explore.

For their follow-up to their 2006 album, A Matter Of Life And Death, Iron Maiden revisited Bahamas’ Compass Point Studios where they recorded Piece Of Mind, Powerslave and Somewhere In Time. A return to their old stomping ground gave rise to perhaps their best album since Brave New World and saw the band chart at Number One in 28 countries. That title still gave diehard fans a panic attack, though.

When bassist Dave ‘Phoenix’ Farrell suggested that bands would have a Marmite-like response to Linkin Park's fourth studio album, he wasn’t kidding. Recorded over almost a two-year period, this multi-concept record stripped back the rock and embraced atmospheric electronica instead. It may have left some fans cold, but one decade on, it’s now regarded as one of the strongest albums in their back catalogue.

Oceansize – Self Preserved While The Bodies Float Up

This much-missed Manchester five-piece pared back some of their exploratory prog on this self-produced album, but it was no less than ambitious than their previous work. It was perhaps more immediate than its predecessors, too, from the sludgy heaven of Part Cardiac, the frantic It's My Tail And I'll Chase It If I Want To (featuring Biffy Clyro’s Simon Neil) and the beautifully-crafted Oscar Acceptance Speech. Oceansize parted ways in 2011.

In 2010, the idea of the original Guns N’ Roses reuniting was the stuff of fevered dreams and Slash’s solo debut was the closest anyone was going to get. This guest-heavy effort featured appearances by Izzy Stradlin, Duff McKagan and Steven Adler, plus vocals by Ozzy, The Cult’s Ian Astbury, Lemmy, The Black Eyed Peas’ Fergie and Alter Bridge’s Myles Kennedy, who, of course, ended up fronting Slash’s band on their subsequent world tour.

This album marked Ed McRae’s debut for the band, who replaced vocalist George Noble the previous year. The St Albans punks' personnel change breathed new life into their sound, and the subsequent album – featuring guest vocals by Lower Than Atlantis’ Mike Duce on Life Of Luxury and The Devil Wears Prada’s Mike Hranica on Shine On – bristled with hardcore energy and pit anthems to shove your mates to. Your Demise make their return this year at Slam Dunk, where they’ll celebrate the release’s 10th anniversary.

The fact that this album saw the light of day is an achievement in itself. During the recording of the Huntington Beach quintet’s fifth album, founding member and drummer Jimmy ‘The Rev’ Sullivan passed away. After taking some time out to grieve the loss of their friend, Avenged Sevenfold regrouped with fill-in drummer Mike Portnoy and released the album the following summer. “Nightmare marks the point at which the Huntington Beach crew put away childish things and became men,” we said in a 4K review. “Wherever he is now, their brother must be immensely proud.”

You Me At Six – Hold Me Down

This follow-up to their 2008 debut Take Off Your Colours saw Hertfordshire pop rockers You Me At Six reach Number Five in the UK album charts. Boasting the infectious singles Underdog, Stay With Me and Liquid Confidence, and guest slots from The Blackout’s Sean Smith and Kids In Glass Houses’ Aled Phillips, the album earned gold status for sales of over 100,000. “This looks set to be the album to steer them on to new horizons,” wrote Kerrang!. Their Wembley Arena show was less than two years away.

The Wonder Years – The Upsides

Pensive Philly pop punks – try saying that with a mouthful of pepperoni pizza – The Wonder Years kicked off the new decade with their follow-up to 2007’s Get Stoked on It!. The first part of a trilogy exploring frontman Dan Campbell’s existential angst and thoughtful observations, The Upsides is raw, earnest and damn essential.

Young Guns – All Our Kings Are Dead

Before High Wycombe quintet Young Guns released their debut album, they’d already been nominated as Best Newcomer at the 2009 Kerrang! Awards and opened for Bon Jovi at London’s O2 Arena. Produced by Dan Weller, All Our Kings Are Dead lived up to all the press bluster and showed the band were perfectly capable of writing arena-sized choruses.

Against Me! – White Crosses

Gainesville punks Against Me! caught some unnecessary flak after signing to a major label for 2007’s New Wave. Laura Jane Grace’s confidence was given a turbo-charged boost after receiving a letter from Bruce Springsteen, which read: “If you’re not reaching out beyond the audience you have to the greater audience you might have, you’ll never find out what it’s worth, and how much meaning you can bring into your fans’ lives.” What better time, then, to team up with producer Butch Vig and knock out a collection of punk-fuelled rock anthems? The answer, of course, is 2010.

My Chemical Romance – Danger Days: The True Lives Of The Fabulous Killjoys

After recording some 28 songs for the follow-up to 2006’s The Black Parade, My Chemical Romance shelved the lot. Gerard Way moved his family out to the desert and found inspiration in the barren environment, penning the frantic single Na Na Na (Na Na Na Na Na Na Na Na Na). And, like the album before it, Danger Days… is a concept album, this time based on a gang called the Killjoys, living in a post-apocalyptic Californian city. The album fizzes and crackles with an infectious energy and sounds like a band rediscovering their mojo once more.

Long before Sonic The Hedgehog fans discovered the art-tweaking power of collective whinging, Ozzy’s eleventh studio album was originally titled Soul Sucka before his fanbase objected. Scream, then, was the first and only album to showcase guitarist Gus G and would be Ozzy’s last studio album for a decade. Ordinary Man will be released in January.